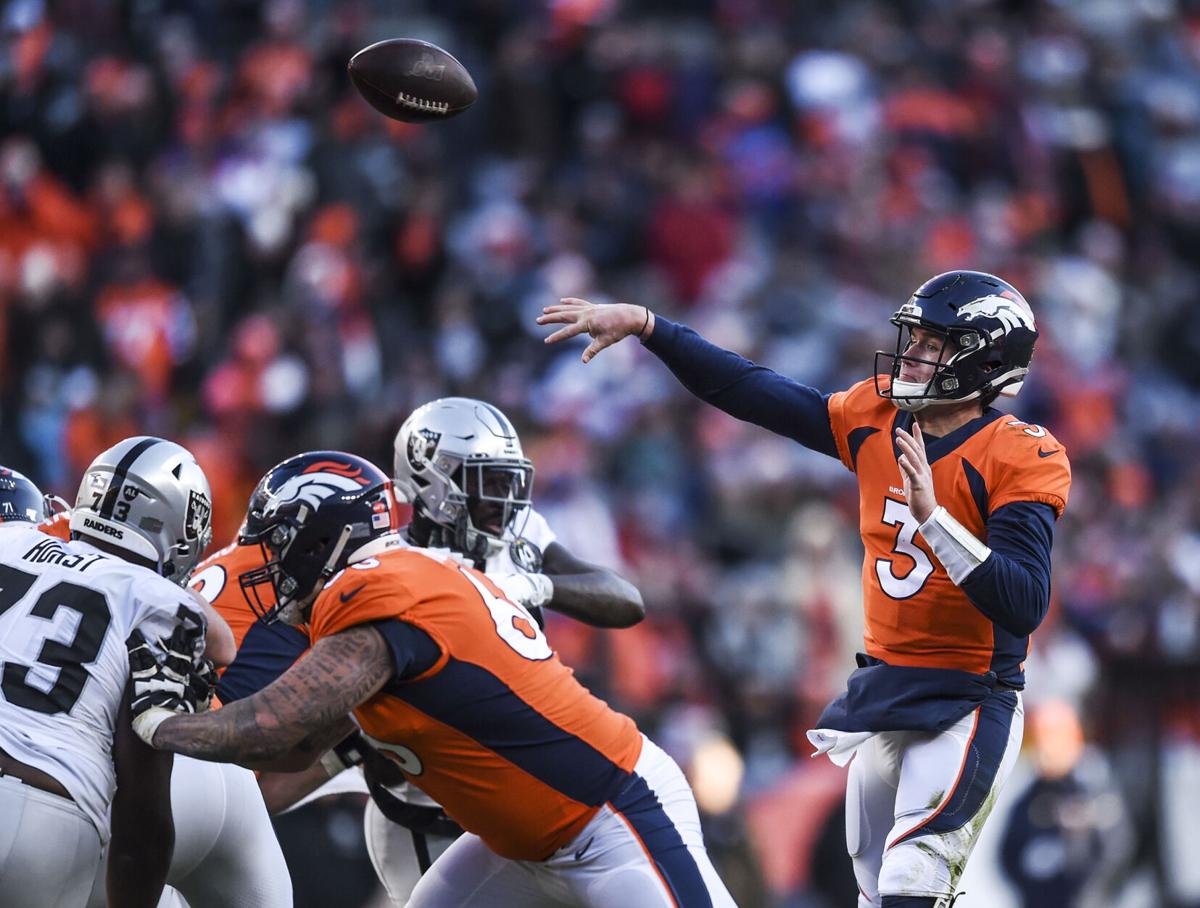 Broncos quarterback Drew Lock passes against the Raiders on Dec. 29, 2019, at Empower Field at Mile High in Denver.

Broncos quarterback Drew Lock passes against the Raiders on Dec. 29, 2019, at Empower Field at Mile High in Denver.

Drew Lock has no time for excuses heading into his second season with the Denver Broncos.

The 23-year-old quarterback out of Missouri lost irreplaceable reps when organized team activities and the preseason was canceled due to the coronavirus pandemic — a big loss for someone trying to master first-year offensive coordinator Pat Shurmur’s schemes. Lock’s focus, however, is on using his time as efficiently as possible and helping the Broncos catch up to other NFL offenses. Last year, the Broncos were fifth-worst in yards per game, averaging 298.6 under Rich Scangarello, Shurmur’s predecessor.

“We’re all allowed the same amount of time in our facility,” Lock said. “We all have professional coaches that have been in this game for a long time. We all get to learn and be with them for the same amount of time. It’s an even playing ground. It’s just going to be what we do with the time that we get together.”

Last year’s struggles are hardly on Lock, who missed the first few months of his professional career with a thumb injury while Joe Flacco quarterbacked a limited offense. Lock started the final five games of the season, accumulating 1,020 passing yards and seven touchdowns against three interceptions and completing 64.1% of his passes. Most importantly, the Broncos went 4-1 when Lock started.

Shurmur’s offense won’t be the only thing new to Lock and the Broncos. Running back Melvin Gordon, a two-time Pro Bowl selection, signed in the offseason, while the Broncos used the 15th overall pick on Jerry Jeudy, a wide receiver out of Alabama and their second-round pick on Penn State pass catcher KJ Hamler. Lock’s early reviews have been positive despite the limitations.

“I like him,” Gordon said. “He’s a fiery quarterback. He wants to be great. He wants to learn and he’s hard on himself. Anytime he makes a bad throw, whether it’s pass catching, skeleton (drills) or anything, he’s like, ‘Hey, Mel, let’s run it back on the side. Let’s run that play back over.’ He wants to be (a) perfectionist and I feel like as a quarterback — in some type of fashion — you have to be and think like that in a sense.”

“(He) helped a lot during the offseason,” Jeudy added. “We’ll step out and he’ll throw some routes to some of the guys. He’s a great leader. He’s a guy that leads by example.”

This year, where interaction and bonding at the team headquarters in Englewood is limited by health guidelines, the offense appears to be off to a fine start under Lock’s leadership.

“I think our coaches and players did a good job with the virtual aspect of the offseason,” coach Vic Fangio said when asked about the offense. “That has continued with the early phase in part of camp.”

During a media session early in training camp, Lock said his goals and expectations, which he preferred to keep private, were not impacted by all that 2020 has thrown his way. Instead, he’s using what time is available to make another leap in his second NFL season.

“We’re going to have a shortened period of time where we’re going to have to pick up a lot of things extremely quick. It may not be the prettiest at first, but our job is to make the mistake, learn from it and try not to make that mistake more than once because we really don’t have time to keep making the same mistakes,” he said.

“I’m still expecting the same thing from us this year because we’re going to put in the extra work to be able to make up for that time lost.”

Broncos 2020 Preview: A guide to the season

This guide to the Broncos 2020 season looks at the schedule, the rookies, the O-line and more.

Paul Klee: Why the 2020 season is so important for the Broncos franchise | Broncos 2020 Preview