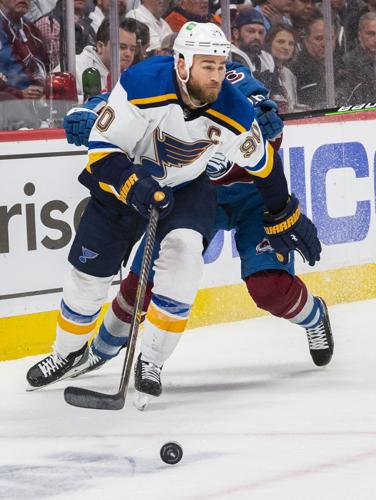 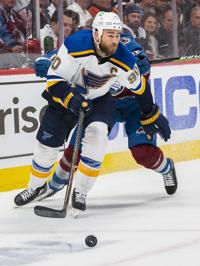 Blues center Ryan O'Reilly (90) takes the puck from behind the St. Louis Blues goal as Avalanche right wing Mikko Rantanen (96) defends during the first period of Game 1 of the second round of the Stanley Cup Playoffs Tuesday at Ball Arena.

Blues center Ryan O'Reilly (90) takes the puck from behind the St. Louis Blues goal as Avalanche right wing Mikko Rantanen (96) defends during the first period of Game 1 of the second round of the Stanley Cup Playoffs Tuesday at Ball Arena.

DENVER — This ice house is on fire.

Apologies to the LoDo neighbors. This Avalanche party goes all night long, maybe all playoffs long. At 10:39 p.m. local time, that eruption you heard was Ball Arena trying to lose its voice.

When Avalanche defenseman Josh Manson stuck a wrist shot past St. Louis goalie Jordan Binnington for a 3-2 overtime win in Game 1, over 18,000 true believers let loose with a roar.

The Avs lead the second-round series 1-0.

Anyone else’s ears ringing? Ten years in this gig, that was the loudest I’ve heard Ball Arena, or Pepsi Center for that matter, and there have been a handful of Monster Truck rallies mixed in.

“There’s no sound, because it’s in the net,” Manson said after scoring his first career playoff goal at an optimal time. “Then you just hear the crowd erupting.”

Boy, did it ever. God bless the hockey club that skates into Ball Arena and escapes with a win to tell the grandkids about. How the Avalanche take home ice, ride a wild crowd and transform into a ruthless bunch is almost scary. Just ask the Blues, who built a 1-0 lead and tried like heck to hold on for a lucky break to force OT.

Almost pulled it off, too, thanks to a pair of Avalanche mistakes. Cale Makar turned over the puck, leading to a Ryan O’Reilly goal. Then a shaky line change led to a Jordan Kyrou goal.

All that, and it never felt like the Blues could pull off the big upset. Not in this house. Not with this crowd. It’s hard to imagine St. Louis will get a better shot to steal a road win than they had in Game 1. The Blues still couldn’t swing it.

The Avs had 13 shots on goal in overtime, the Blues none. If we're being real, Game 1 was a 6-2 rout disguised as a 3-2 overtime nail-biter.

“Break ‘em down,” as Avs coach Jared Bednar put it.

Playoff hockey tickets are crazy expensive. But there were $100 200-level tickets still available at puck drop, and there are worse ways to blow a couple hundred bucks than experiencing the Avs at home. Entering Game 1 the Avs were 54-6-5 at Ball Arena over the previous 65 games.

Read that again. It's nuts. It’s not normal what they’re doing these days on home ice.

At this point it’s worth the ask: Who the heck is going to beat the Avs at Ball Arena? That’s a prerequisite for one of the three remaining teams in the Western Conference, since the Avs own home ice through the conference final. The Avalanche’s dominance here is no joke.

It doesn’t bode well for the Blues that Valeri Nichushkin and Sam Girard were the Avs who scored the goals that erased an early deficit. You know Nathan MacKinnon, Cale Makar and Mikko Rantanen eventually are going to join the scoring fun. Those big three names combined for a single point, and the Avs still had enough firepower to close out a playoff game.

Credit Avs fans, whose noise is something out of an air show. You can feel the barrage coming before it arrives. During an overwhelming second period, when the Avs remembered who they are and where they were playing, the Avs unloaded 18 shots (to the Blues’ nine). Binnington was fantastic, but there are only so many shots one goalie can stop. When the Avalanche get humming, the next goal feels like a matter of when, not if. Game 1 was like that.

Tell you what, Avs fans are getting cocky, too. There was never a sense of concern when O’Reilly, the Blues captain and ex-Avs forward, scored the first goal of the series. The locals saw how the Avs hit the post five times and knew in their hearts the onslaught was inevitable.

Woody Paige: Ricochets keep game close, but Avalanche win in overtime, in for a tough series

O’Reilly’s goal was a right-place, right-time sequence. An Avs favorite during his six seasons here a long time ago, O’Reilly is usually in the right place at the right time. He’s the No. 1 reason the Blues can make this a competitive series, but not much in Game 1 suggested that will happen. The Avs brought a relentless attack, showing no signs of rust from a week layoff.

Rage, maybe. But no rust.

Avs crowds don’t go wild as much as they stay wild. This one stayed wild as Russell Wilson raised a sign that read “Playoff Noise!” But even the new Broncos quarterback was more of an accomplice to the roar than the cause of it. God bless the road team that steals a win here. This house is on fire, and they will have earned it.

DENVER — For the Avalanche, it was a night of unlikely heroes.