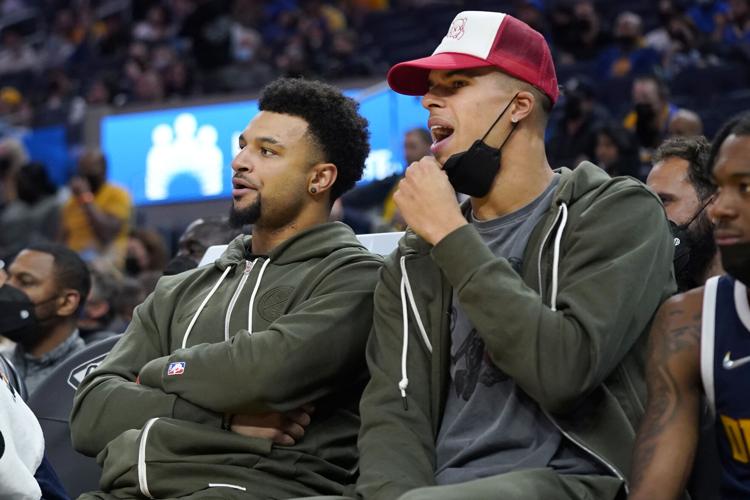 Nuggets' Jamal Murray, left, and Michael Porter Jr. watch from the bench during the first half of a preseason NBA basketball game against the Golden State Warriors Oct. 6, 2021. The Nuggets sorely missed point guard Murray (ACL recovery) and sharpshooter Porter (back) this season. The talented tandem are on the mend and will be counted on heavily next season. 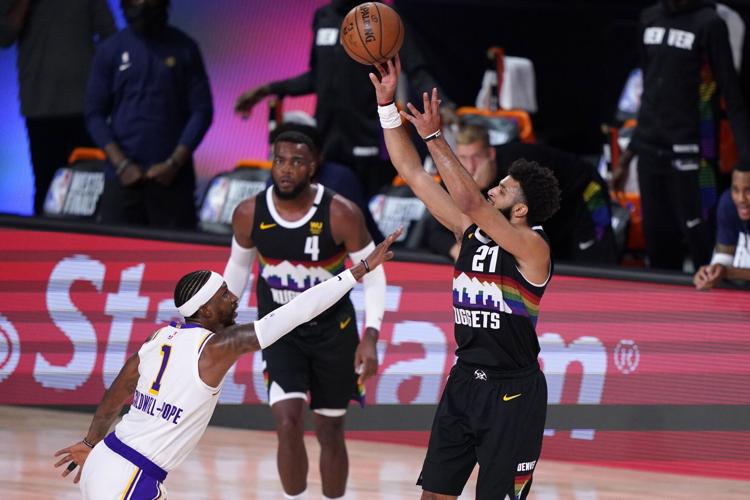 Nuggets' Jamal Murray, left, and Michael Porter Jr. watch from the bench during the first half of a preseason NBA basketball game against the Golden State Warriors Oct. 6, 2021. The Nuggets sorely missed point guard Murray (ACL recovery) and sharpshooter Porter (back) this season. The talented tandem are on the mend and will be counted on heavily next season.

DENVER • This is how it usually goes when I offer free advice to the Nuggets front office: They're all nice guys, so they nod, smile, feign interest ... then go out and do something else.

Hey, at least they indulge us little people.

But Wednesday was different. The Nuggets' decision-makers were all kinds of distracted for other reasons, and good ones. As I was giving assistant general manager Tommy Balcetis a (free!) list of the players the Nuggets should draft next year, a most beautiful basketball sight unfolded right before him.

Jamal Murray was flying through a full-speed, sweat-through-his-shirt, exhaustive workout. Yes, that Jamal Murray. Yes, flying. Yes, he looked as awesome as you’d hope. Three-point bombs. Turnaround jumpers. Dunks off both knees, even the surgically repaired left one.

“He’s going to be better than ever,” Balcetis promised.

A day before, Murray played “probably the most serious 5-on-5 he’s played since he tore his ACL in Golden State all those (15) months ago,” Nuggets coach Michael Malone said after.

You never know what you’re going to find these days at Ball Arena. One day, it's the Stanley Cup. The next, it’s Nikola Jokic’s Nuggets finally, mercifully, thankfully becoming whole again.

Murray’s about 95% healthy, a team source estimated. Michael Porter Jr. and his bum back are about 80% healthy with three months to close the gap. One of MPJ’s brothers, Jontay, is on Denver’s summer league team.

But here’s a promise for Nuggets fans who want what Avalanche fans have: I sure like what GM Calvin Booth, Balcetis and the Nuggets front office have done this offseason. OK, signing DeAndre Jordan is weird. But everything else: two thumbs up.

They began by awarding Joker the richest deal in NBA history, $264 million. They identified their weakness and doubled down on defenders Kentavious Caldwell-Pope (a film-study addict, so he and Murray should hit it off) and Bruce Brown (“Our guys are going to love him,” Balcetis promised). They drafted a sure thing (Kansas competitor Christian Braun) and a project (UCLA wing Peyton Watson). Braun won three high school state championships and a national championship at Kansas, and Malone will play him a bunch.

“Did you watch him a lot?” Balcetis asked.

Yes, that’s why I’m always giving you guys free advice. The whole Big 12 hated Braun, and this offseason was all about finding Nuggets the whole NBA can hate playing against, too.

“He has a chance to play for us next year,” a rarity for rookies, Malone said.

What this Nuggets offseason also showed is that friendships won’t get in the way of business. Will Barton’s name is still No. 1 on the “Most 3-Pointers” plaque in the practice gym. Thrill is gone. Monte Morris was a steady lead guard and another of Malone’s favorites. He gone, too. Loyalty’s been a Nuggets trademark, but the sentimentality had gotten stale. With Tim Connelly scoring a deserved pay raise in Minnesota, Booth is No. 1 and Balcetis is No. 2 on the Nuggets’ totem pole.

Their summer mission, Balcetis said: “We got tougher, meaner and more defensive. And that was the emphasis. We want to surround Nikola and our core with as many tough-minded, defensive-minded players as possible."

These complementary pieces, the role players, are upgrades. They're also distractions from the elephant in the gym: The Nuggets won’t have a chance to run with the Warriors, Clippers or Suns if Murray and Porter are hobbling around.

Denver Nuggets rookie Peyton Watson out to pave his own lane

Porter is the most important player in the NBA, and you can’t convince me otherwise. If the 24-year-old is healthy enough to score 19 points per game, as he did two seasons ago, the Nuggets are good enough to mess around in the conference finals. If MPJ is laboring around with a bad back, they’re not. Pretty simple.

The Nuggets have 145 million reasons to pray he’s healthy MPJ, not hobbling MPJ. I have a hard time seeing how multiple back surgeries can end up well, but there's a first time for everything.

As Malone said Wednesday, “We’ve hung a few division banners. Now we want to hang a much bigger and more important banner."

DENVER - The 15-man roster is complete after the Denver Nuggets and forward Vlatko Cancar agreed to a multi-year contract extension Thursday.