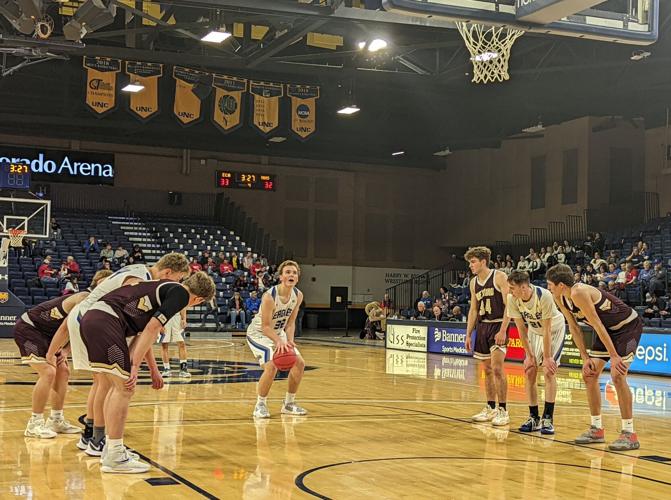 Evangelical Christian senior Michael Mann shoots a free throw during the Class 1A state basketball tournament at the University of Northern Colorado on Thursday. 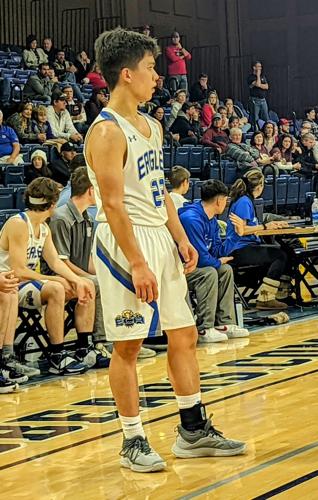 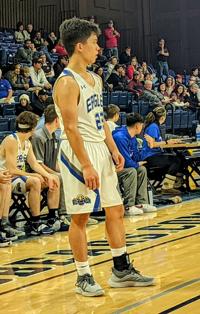 Evangelical Christian point guard Michael Kim, who rarely subbed out for the Eagles this season, awaits a referee's decision Thursday in the CHSAA state basketball tournament.

Evangelical Christian senior Michael Mann shoots a free throw during the Class 1A state basketball tournament at the University of Northern Colorado on Thursday.

Evangelical Christian point guard Michael Kim, who rarely subbed out for the Eagles this season, awaits a referee's decision Thursday in the CHSAA state basketball tournament.

GREELEY — Hate to say it, but life doesn’t get easier after losing in the state tournament.

Good news is, the boys basketball players from Evangelical Christian Academy, a school of 70-ish students in Colorado Springs, will be well-prepared for the bumps and twists and son-of-a-guns that no one's going to avoid in a full life.

They’ve had some bummers the past three seasons. Nothing life-or-death — well, nothing they told me about — but some real bummers for a bunch of teenagers. The Eagles were bummed as all get-out after a 38-37 loss to a gritty squad from Merino in the Class 1A state quarterfinal here at Bank of Colorado Arena.

They’ll move past it. They’ll remember with a smile the 11 seniors who played their final sanctioned game of hoops, not with the tears they shed Thursday. And they’ll be better men for these past three seasons because, like I was saying, there were some bummers on the way.

Take March 2020. No, really, take it. It was midnight the night before the state tournament when Bob Wingett, their coach, woke them up to let them know only their parents could attend the quarterfinal game. Maybe 24 hours later the tournament was canceled for good thanks to the state’s COVID-19 response. Or take March 2021 when, athletic director Don Steiner said the Eagles had to forfeit their Sweet-16 game in the state tournament due to COVID protocols.

“(That’s) tough for kids, you know?” Wingett said. “But they have phenomenal families.”

Or take the inspirational case of ECA senior Noah Coddington. He was on the bench Thursday, rooting and clapping and lifting up his guys, as the Eagles recovered from a 10-0 deficit to make it a whale of a game. Couple years ago Noah was in a mountain biking accident and broke his neck, his coach said. Doctors determined basketball was a bad idea, though he can still play baseball. And if Noah keeps the spirit he showed from the bench he’s going to make the world a better place.

Wednesday night — the night before the big game — Noah spoke to the team. Goosebumps, I tell you, when he recalled the practice he revealed to his guys he couldn’t play basketball anymore due to a freak mountain biking injury. And his guys hugged him and said they love him and that’s why he cheered his heart out even though he couldn’t play. You can say this stuff’s cheesy, but it’s not. We need more Noahs.

But the Eagles stormed back, as they do. Michael Mann had 10 points, R.J. Wagner had nine points, Jared Guest had seven points, Vito Yacovoni had five points. The Eagles run “Elbow!” and “4-Low!” and all the things you expect the Eagles would run, and they ran their stuff and guarded well enough to win 21 games and lose only three. No dunkers on the squad, no future Division I athletes, and the Eagles were probably one deadeye outside shooter short of a berth in the state semifinal Friday.

But goodness, they play hard. Same for Merino. Shoot, my own knees were in danger more than once on Thursday, with all the reckless bodies flying out of bounds for loose balls. This is a level of ball where rivals like Evangelical Christian and Simla stick around for the next game to root on ... their rivals? Yes, that happened this season. Different world, Class 1A ball, and I'll take it. Beats Michigan and Wisconsin struggling to make it through a handshake line without blowing up in a fight.

Class 1A ball for the win.

Trailing 32-28 late in the fourth quarter, Wagner nailed a 3 from the corner. One-point game. Mann followed with a tough bucket in the lane. ECA had the lead, 33-32. Merino wouldn’t go away and grabbed a 38-37 lead with under 1 minute left. But Merino missed a free throw.

ECA had possession with 6.4 seconds left and turned it over. Ballgame. Bummer, another one.

“Last night we ended practice with, ‘What are your favorite memories?” Wingett said after.

A loss at state won’t be on the short list, but they’ll be better men for it.

St. Mary's used its high-speed, trapping defense to frustrate Eagle Ridge Academy before taking over in the second half to reach the 3A semifinal.