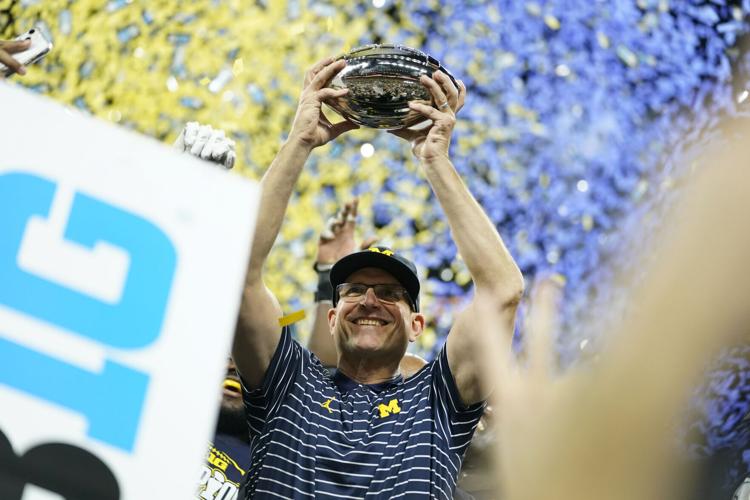 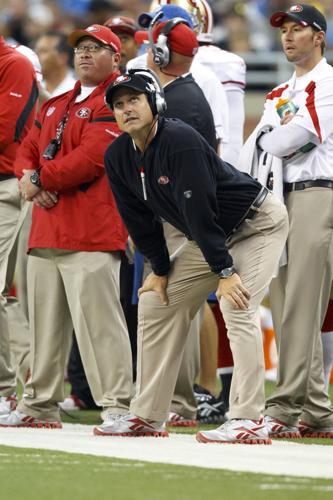 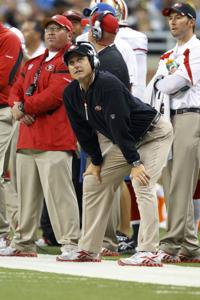 San Francisco 49ers head coach Jim Harbaugh watches the clock at the end of in the second quarter of an NFL football game against the Detroit Lions in Detroit, Sunday, Oct. 16, 2011. (AP Photo/Rick Osentoski)

San Francisco 49ers head coach Jim Harbaugh watches the clock at the end of in the second quarter of an NFL football game against the Detroit Lions in Detroit, Sunday, Oct. 16, 2011. (AP Photo/Rick Osentoski)

The Broncos need a Boss with a capital "B."

His name is Jim.

It’s going to take the fattest check ever awarded to a Colorado coach to lure Jim Harbaugh away from Michigan, a more attractive position than the Broncos'. Thankfully, Broncos ownership has the deepest pockets in amateur or professional sports.

Nathaniel Hackett on Monday became the fifth NFL coach to not make it through his first season. He joined Urban Meyer (2021), Bobby Petrino (2007), Pete McCulley (1978) and Lou Holtz (1976). Hackett went 4-11. He was a problem, not the problem, because the Broncos have so many.

Shoot, Hackett would not crack the top 3 of biggest Broncos problems: Russell Wilson (by far), George Paton (who traded for Wilson and hired Hackett) and a toxic culture of losing.

The Broncos named Jerry Rosburg the interim coach — not Ejiro Evero, the dynamic defensive coordinator. Why would Evero want the interim title, anyway? Sunday, the Broncos will lose to the Chiefs, for a 15th straight time, and close the season with another loss to the Chargers.

They will finish 4-13, the fewest wins here since Josh McDaniels was fired in December 2010.

A timeline of Nathaniel Hackett's Broncos tenure: From a 64-yard field goal to teammates fighting on sidelines

Taking over this locker room would only put a stain on Evero’s snazzy resume. Good call, “E.”

The Broncos don’t make coaches. They suggest to coaches to rent, not buy.

Hackett “blew away” Broncos brass during his job interview, Paton once said. One team source called it “the perfect interview.” Charismatic and genuinely enjoyable, Hackett is one swell dude.

But the Broncos don’t need a best friend or fun uncle. They need a Boss with a capital "B."

The Broncos’ new owners are, by their own admission, new at this sports thing. Football is not their area of expertise. There are few better football bosses than Harbaugh, who supervised program turnarounds at San Diego and Stanford before flipping the San Francisco 49ers and Michigan. No. 2 Michigan meets No. 3 TCU in a College Football Playoff semifinal Saturday.

Give him all the power here: president of football operations and head coach. He reportedly makes $7.3 million annually in Ann Arbor. Double that in Denver. Put him in the pay realm of the Rams' Sean McVay ($15 million, according to reports) and the Seahawks' Pete Carroll ($11 million). Harbaugh has suggested a courtship with the Vikings last offseason was the final time he would pursue an NFL job.

Perfect, too. Make him an offer he can’t refuse.

Dan Quinn figures to be the leading candidate for the Broncos. They passed on him last time.

Broncos history favors the bold. Owner Edgar Kaiser once asked a Broncos executive what it would take to move up and draft John Elway. When the executive said it wouldn’t be possible, Kaiser responded, “Anything can be bought and sold in America.” The trade changed Colorado history.

Mike Shanahan came to a franchise that had never won a Super Bowl and made it so the acceptable standard here was winning Super Bowls, then won two. Where others saw a 31st-ranked offense, Peyton Manning saw a winner.

I heard the 60s were rough, but a 51-14 loss to Baker Mayfield’s Rams on Christmas Day was the lowest point in my Broncos history. Teammates fought teammates. Randy Gregory earned a suspension from the NFL. Russ had a 3.6 QBR, a career worst. The score was 17-0 Rams before the Broncos had a first down.

The Broncos soon will be on their fifth coach since 2016. This mess requires a boss with a capital "B." Be bold. Hire Harbaugh.

The firing of Huggable Nathaniel Hackett is the end of another error.