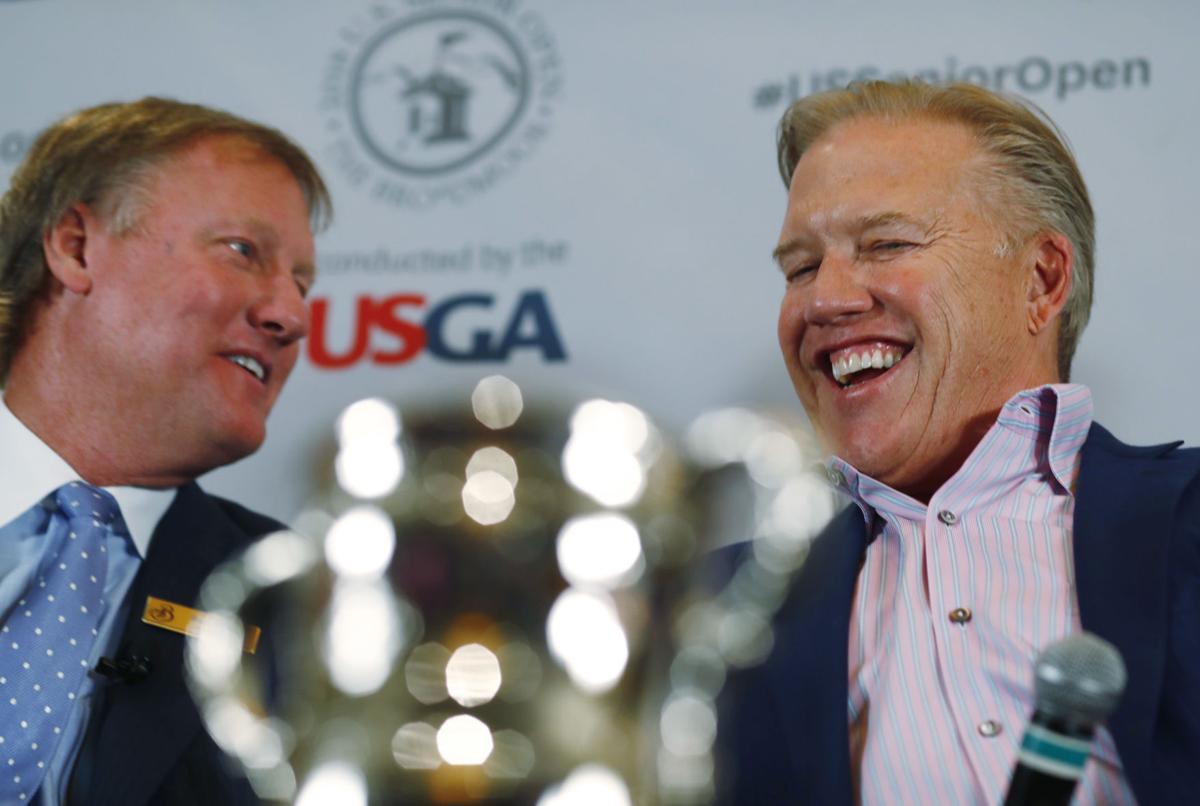 Russ Miller, left, director of golf at The Broadmoor Golf Club in Colorado Springs, Colo., jokes with Denver Broncos general manager John Elway after Elway was introduced as honorary chairman of the 39th U.S. Senior Open, which will be held at the Broadmoorin 2018, during a news conference at one of the retired football player's steakhouses Tuesday, Nov. 15, 2016, in Denver. (AP Photo/David Zalubowski) 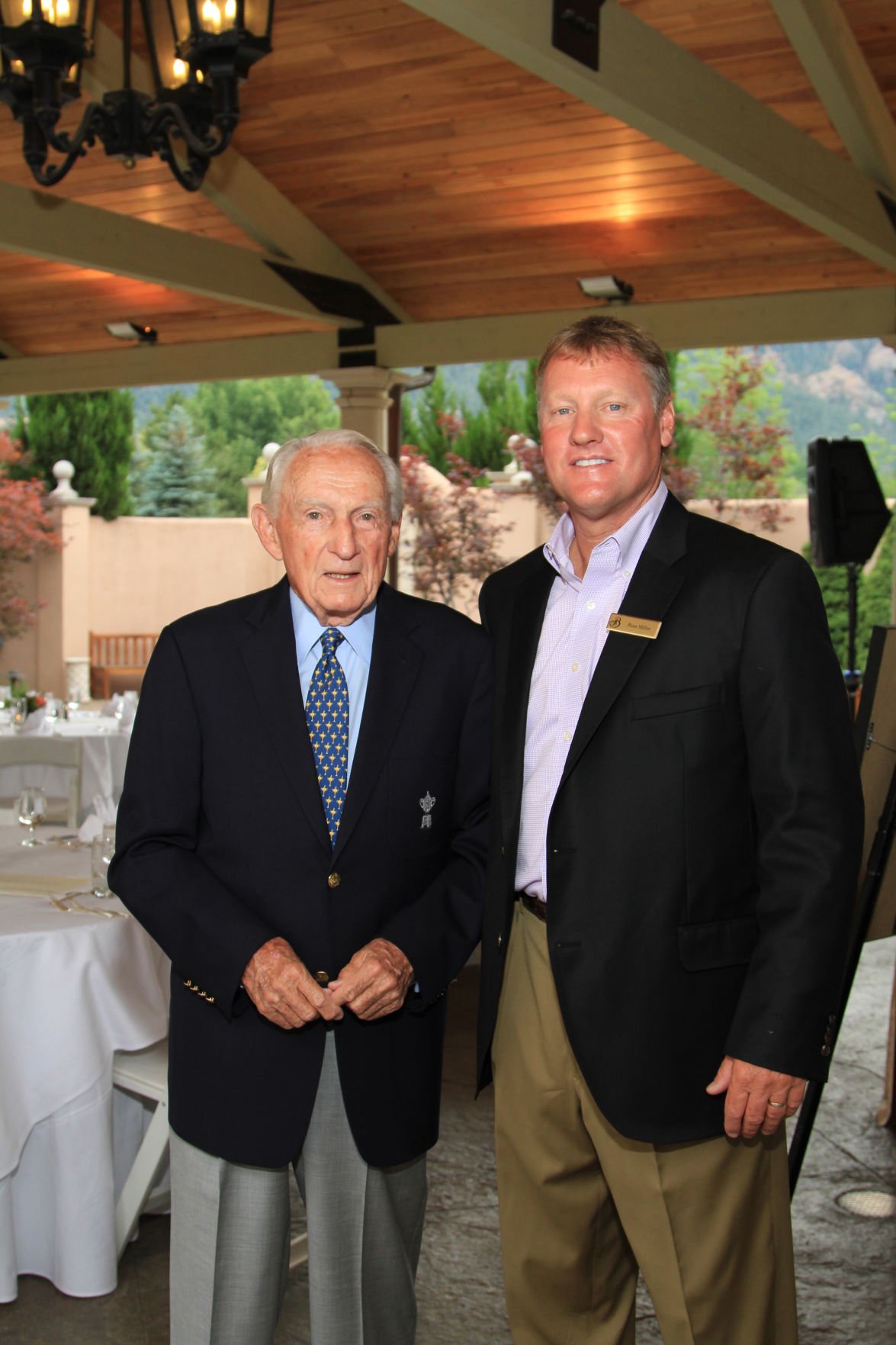 The Broadmoor's directors of golf: Dow Finsterwald, left, and his successor Russ Miller

Russ Miller, left, director of golf at The Broadmoor Golf Club in Colorado Springs, Colo., jokes with Denver Broncos general manager John Elway after Elway was introduced as honorary chairman of the 39th U.S. Senior Open, which will be held at the Broadmoorin 2018, during a news conference at one of the retired football player's steakhouses Tuesday, Nov. 15, 2016, in Denver. (AP Photo/David Zalubowski)

The Broadmoor's directors of golf: Dow Finsterwald, left, and his successor Russ Miller

Later models of his Zebra putter came with a white stripe down the center of the D-shaped mallet. The understood directive was hit it here.

The Zebra in Russ Miller’s golf bag is squished between a 3-wood and a driver. His Zebra has no white stripe, confirming its age, along with those four screws on the bottom. As a kid growing up in Asheboro, N.C., if Russ ever removed the plate to add or subtract weight, he can’t recall. Miller is 56 now. He was 9 when he got it.

“My daddy gave it to me,” he says, that familiar Southern drawl warming the room.

The Zebra goes everywhere with him. The Broadmoor’s longtime director of golf used it to judge the fairness of pin placements on each of the three occasions the resort has hosted a USGA championship during his tenure. He hops in a cart, one ball in his pocket, to test out the 18 greens on the famed East Course. He’s used it “countless” times to replicate Jack Nicklaus’ putt on 18 to beat Charlie Coe in the 1959 U.S. Amateur — right up until Nicklaus himself politely informed, “Actually, the cup was over there.” He uses it despite working in a pro shop with hundreds of newfangled putter designs and despite the ribbing he takes for using it.

“I make fun of him for still using that putter,” says Jack Damioli, president of The Broadmoor. “It’s about the same size as a golf ball.”

The Colorado Golf Hall of Fame has a one-person induction class in 2020: Russ Miller, who is everything the game of golf should be. In many ways, the Zebra represents how a man who first worked in North Carolina’s tobacco fields became a humble force in Colorado golf for a quarter century: understated, detailed and utterly reliable.

Miller’s been the director of golf at The Broadmoor since the legendary Dow Finsterwald hand-selected him to be his successor. Due to the coronavirus pandemic, the Colorado Golf Hall of Fame induction ceremony was delayed a few months, though I suspect the Zebra still will be in use on Sept. 27.

That’s where the putter and its owner diverge.

There’s only one Russ Miller.

Around dusk-thirty on a Saturday night a few years back, Jack Nicklaus strolled up to the 18th green on the East Course, a rare time Cheyenne Mountain wasn’t responsible for the longest shadow over the historic finishing hole. Mr. Nicklaus, as Miller addressed him, was there for The Broadmoor’s 100th birthday, and, if time allowed, to reenact the 8-foot, left-to-right birdie putt that beat Coe in '59.

“Probably the most important putt I ever made,” Nicklaus said then.

The scene captured Miller’s dedication to detail. He'd spent the previous month researching the famous putt, from archived photos to asking folks who might have been there. Each day he told Damioli, “I’ve got right where it is. I’m sure of it.”

“And when Mr. and Mrs. Nicklaus got here, he proceeded to tell us how he beat Charlie on 18,” Damioli says.

Driver, short of the creek. Six-iron, cut below the pin. Up-hill putt, firm.

“And Mr. Nicklaus says, ‘Gentlemen, this is not where the pin was,’” Damioli says with a laugh. “I’ll never let Russ forget that.”

“Remember,” Damioli adds, “I’ve been in the hospitality business almost 40 years. Russ is, by far, the best golf professional I’ve ever had the good fortune to know.”

These anecdotes with well-known golfers are fun to relay over a cold one, but they’re not the reason Miller is going in the Colorado Golf Hall of Fame. (Although it’s telling that Irwin responded immediately when told this column was about Miller. “I’ll do anything for Mr. Russ,” Irwin says.) The reason he’s going in the Hall of Fame is a profound impact on the Colorado golf community as a whole. Forty-one golf course general managers, club pros or golf directors were mentored by Miller and longtime Broadmoor pro Mark Kelbel. Fourteen Broadmoor caddies earned Evans scholarships. Toss in the estimated $22 million the 2018 U.S. Senior Open brought to the Colorado economy, for example, and profound is too light a word.

“I remember a life lesson that I still use decades later with my own staff,” says Graham Cliff.

Cliff was straight out of college, recently married, trying to make it in the golf business. He went to his boss, Miller, with a request: “I need to make more money,” Cliff says. Miller sent him home to draw up a personal budget — rent, student loans, groceries, the works. "Russ got me in line," Cliff says, and years later he’s the first PGA pro at Colorado Golf Club.

“I am not where I am today without Russ and Mark,” Cliff says.

That network rushed to Miller’s side when unspeakable tragedy struck the Miller family. Linda Miller, his wife of 32 years, passed away last year at the age of 56. The first phone call came from Irwin. The second came from Curtis Strange. Last week on Mother’s Day, love poured in from golf courses all across Colorado.

“She was the best mom ever. She had no enemies, the best thing you can say about a person. She loved to fish. Loved the mountains and the ocean,” he says. “She was my best friend.”

It’s not that Miller roots for the Will Rogers chimes when good buddy Hale Irwin is on the tee box. He just doesn’t root against it.

The chimes that ring down from Will Rogers “Shrine of the Sun” on Cheyenne Mountain are a personal nemesis for Irwin, who once topped a drive off the first tee box when the chimes kicked in: “Everybody else in the field was unaffected by it,” Irwin says. “But of course Ol’ Will gives me the time right in my back swing.”

The ball dribbled 30 yards and stopped under a tree. Irwin somehow made par.

“It figures Russ would tell you that story,” Irwin says. “Damn Will Rogers.”

It’s largely because of Miller that Colorado Springs will benefit from the 2025 U.S. Senior Open — with plans to return again in 2031, The Gazette learned. It was Miller’s idea to house all the players and their families at The Broadmoor, instead of being scattered around area hotels, for the 2018 U.S. Senior Open.

“We could not have had a better championship than we did two years ago,” says USGA championship director Robbie Zalzneck, whose first golf lesson came from Miller almost 30 years ago. “It was a true family experience. Every player wants to go back to The Broadmoor because of it. Russ is the driving force behind that.”

Hall of Fame inductions were never in Miller’s plans. Given the option of a sand wedge or fly rod, he’s off to a Teller County trout stream every time. The son of a Dodgers draft pick, Miller lists golf fourth or fifth on his childhood sports. His playing credentials are not those you normally see with a Hall of Famer; Miller’s prized trophy comes from a Father-Son event he won with George Miller, who’s 86, in the Carolinas.

“Guess my goal has been to represent the working golf pro as much as anything,” he says.

Through five decades with the same putter, Miller only regrips the Zebra when afforded the time to do it himself. U.S. Senior Open champ Kenny Perry once mailed him a replica. He knows golf technology probably could shrink his score, yet he sticks with the Zebra. Why? For the same reason he welcomes a guest the same way he welcomed Jack and Barbara Nicklaus: "Mr. and Mrs."

The same things that worked then work now.

Paul Klee: Denver Nuggets remember rise of Antonio McDyess — and what it says about next NBA draft

Antonio McDyess rode an unforgettable show in the 1995 NCAA Tournament all the way to the No. 2 pick in the NBA Draft. "I'll never forget it," Nuggets boss Tim Connelly said. Is a similar story possible without a college postseason?