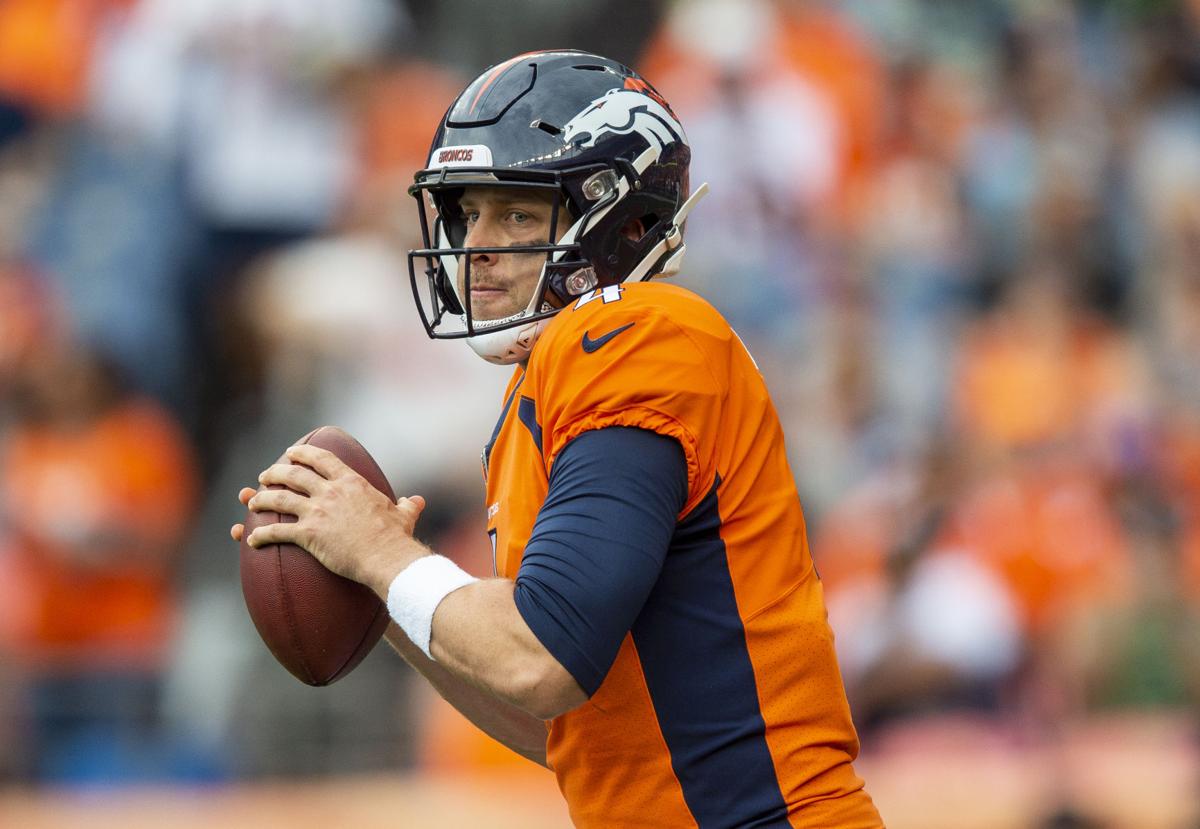 Denver Broncos quarterback Case Keenum looks for an open player during the Broncos season opener against the Seattle Seahawks at Broncos Stadium at Mile High on Sept. 9 in Denver. Sunday’s game at Baltimore will be the first road test of the season for Keenum and his teammates. 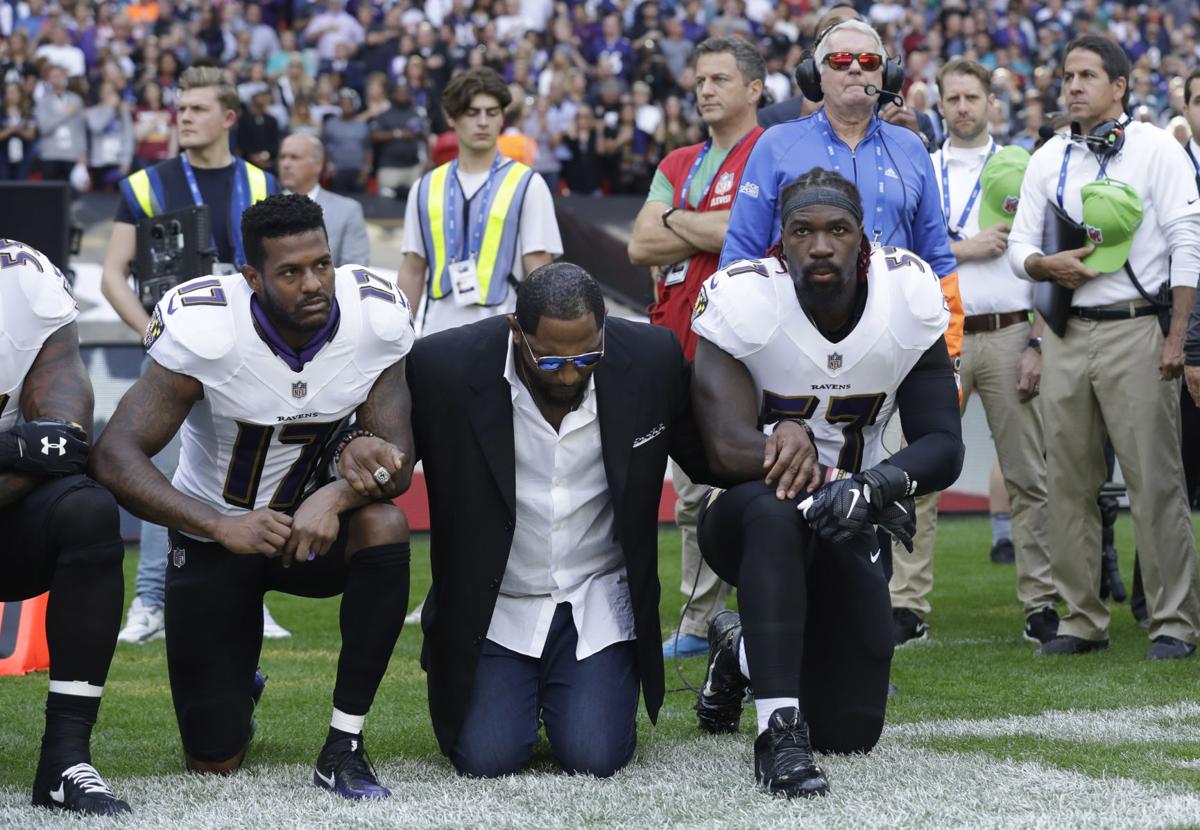 Baltimore Ravens wide receiver Mike Wallace, from left, former player Ray Lewis and linebacker C.J. Mosley lock arms and kneel down during the playing of the national anthem before a game in September 2017.

Denver Broncos quarterback Case Keenum looks for an open player during the Broncos season opener against the Seattle Seahawks at Broncos Stadium at Mile High on Sept. 9 in Denver. Sunday’s game at Baltimore will be the first road test of the season for Keenum and his teammates.

Baltimore Ravens wide receiver Mike Wallace, from left, former player Ray Lewis and linebacker C.J. Mosley lock arms and kneel down during the playing of the national anthem before a game in September 2017.

BALTIMORE • Going out on a limb here, but let’s assume Broncos Country skips the Ray Lewis parade here on Saturday. Starts on Light Street, wraps down to City Hall. Won’t be much orange there. Just a hunch.

Nothing personal against the Ravens’ newest Hall of Famer.

OK, that’s not true. There is. There’s a lot personal against the Ravens. There’s a lot of Broncos history against the Ravens, more than there should be with a team that’s outside the AFC West, outside the Mountain time zone, outside Colorado’s mind for all but this once-in-a-while time they play the Broncos. It’s a rivalry in the way that you don’t think about a head cold until you get one. Then you remember how much you can’t stand it. It’s the worst.

Week 3’s here, and no one’s sure if the Broncos are good, bad, or on a gradual march toward 8-8. That’s where the Ravens come in. Through all the years of a shared history that packs an inordinate amount of drama and memorable games, the Ravens, more than anyone else, have shown the ability to reveal what the Broncos are. Weird, for sure, but it’s almost an infallible personality test for the Broncos, and all we need are the two most recent matchups as proof:

2013: Denver 49, Baltimore 27. The NFL’s greatest offense debuted with seven touchdown passes from Peyton Manning, and off to the races and a bunch of blowouts they went.

2015: Denver 19, Baltimore 13. One of the NFL’s greatest defenses debuted with an interception from Raven-turned-Bronco Darian Stewart to save the day, and off to a bunch of low-scoring games they went.

See what I mean?

”Coach wants a physical identity, and so that’s what we want to play with,” said Broncos special teams coordinator Tom McMahon.

Well, they’ve come to the right place. Welcome back to Baltimore. I expect these 1-1 Ravens turn out better than folks expect, but that could be 20 years of the Ravens pulling a fast one on superior teams, like the Broncos, talking.

But there’s one best way to find out what the Broncos are all about. Play the Ravens. From Ray Lewis to Jamal Lewis to Ed Reed to that one wide receiver we’re not going to talk about, the Ravens often are a problem for the Broncos. They do things like Chris McAlister returning a field goal(!) 107 yards for a touchdown on “Monday Night Football.” Even the Broncos’ own turn against them in a rivalry built from scratch. Who can forget Shannon Sharpe’s tipped touchdown catch in a playoff game in 2000? That one tickled. That other one still tickles — the one we’re not going to talk about — and it’s starting to feel like it’s never going to go away.

Point is, you learn a ton about the Broncos when they play the Ravens. Good timing on this one, too, since the Broncos were home for two games, but really they’ve been all over the map. Three touchdown passes against the Seahawks ... and three interceptions. Leading the Raiders for only 6 seconds ... and winning.

To combat the intimidation with which the Ravens decorate their home stadium, the Broncos need their old heads to show up and play big. Von Miller, Demaryius Thomas (yep, butterfingers and all), Emmanuel Sanders, Case Keenum (he’s 2-1 against the Ravens, with one touchdown and one pick) — those guys must show the way to the young fellas if the Broncos are going to grow a margin for error at 3-0.

The Ravens have a habit of exposing the identity of the Broncos. So it’s not Ray Lewis’ inevitable sermon that should have folks’ attention at MT&T Bank Stadium. Or Joe Flacco, who is $60-ish million richer since the frigid playoff game we’re still not going to talk about. Or even Von Miller, who, get this, can do something he’s never done before, even after all these years — sack a Raven (or a Lion, or a Saint).

Those are all anecdotes for what Sunday offers in the short term: a strong suggestion for which direction the Broncos are headed. At least a couple of things are certain when the Broncos and Ravens reintroduce a rivalry that built itself from scratch: the Ravens twisted the knife in choosing the Broncos game to honor Lewis, and the Broncos will learn what kind of team they are this season. Plus, head colds are the worst.

Paul Klee: The Denver Broncos' 'No Fly Zone' is now the friendly skies

DENVER • They snatched a necklace and brought home a ring. But the blingy glare from all the jewelry in the NFL can’t mask an uncomfortable de…