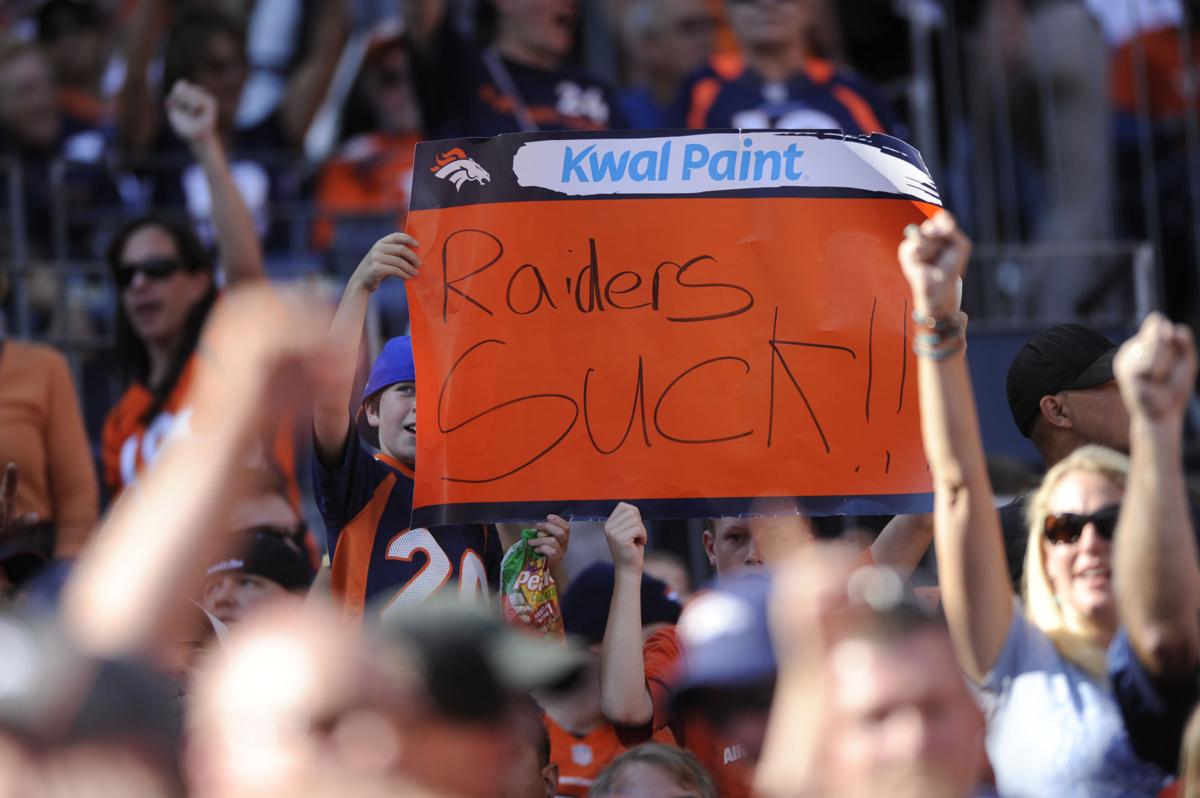 The Broncos-Raiders rivalry means much more to the fans than the players, according to The Gazette’s Paul Klee. Photo by Mark Reis, The Gazette 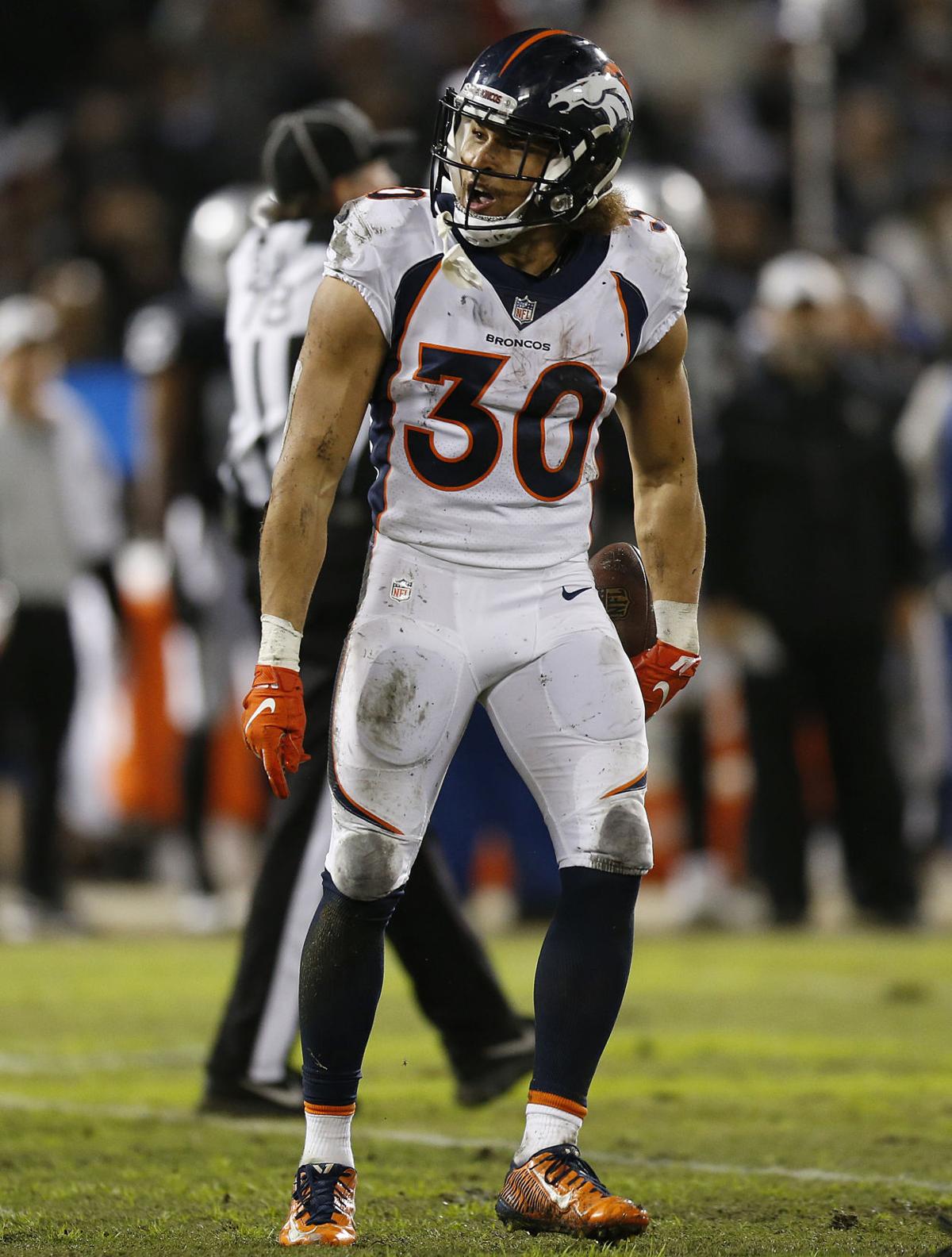 Denver Broncos running back Phillip Lindsay (30) reacts during the first half of an NFL football game against the Oakland Raiders in Oakland, Calif., Monday, Dec. 24, 2018. (AP Photo/D. Ross Cameron)

The Broncos-Raiders rivalry means much more to the fans than the players, according to The Gazette’s Paul Klee. Photo by Mark Reis, The Gazette

Denver Broncos running back Phillip Lindsay (30) reacts during the first half of an NFL football game against the Oakland Raiders in Oakland, Calif., Monday, Dec. 24, 2018. (AP Photo/D. Ross Cameron)

DENVER • Maybe the surest sign the Broncos are on the right track is how they feel about the no-good, lowdown, dirty-rotten Raiders.

“I’ve never been a fan of the Raiders,” Dalton Risner (Wiggins High, Class of 2014) said the other day.

“I never liked them growing up,” added Mike Purcell (Highlands Ranch, Class of 2009). “Nobody did.”

God bless it. The rest of pro sports is out here trading jerseys and real, live Raider hate is saving Colorado’s dearest rivalry from humming Kumbaya. You bet there’s hope for the Broncos. There’s hope for a bunch of reasons that start with the third-youngest roster in the NFL. Hope because Drew Lock can tie a bow on his rookie season with a 4-1 record as the quarterback if he beats the Raiders Sunday. Hope, because seven rookies made starts in 2018, five took starting spots in 2019.

That’s cool and all, but it could also mean the older guys are just past their prime.

But then something weird and different happened at UCHealth Training Center to confirm the Broncos are flirting with a franchise turnaround. Raiders Week rolled around, and the young fellas rolled back the clock to the good ol’ days when competitors didn’t have to be BFF. They behaved as though they desire to resurrect a beloved endangered species: the professional sports rivalry. Here, let Raider Hater No. 1 Phillip Lindsay (Denver South, Class of 2012) preach the good word about the bad guys: “If they think they’re going to come in here and try to clinch the playoffs, they’ve got something coming, because we’re here to win the game. That’s what it is.”

To anyone who still believes Charles Woodson and Lincoln Kennedy deserved those snowballs from the South Stands, that’s music to your ears.

Let’s not kid ourselves. Pro sports rivalries these days survive only in the hearts of fans. NBA stars grew up competing with their “rivals” on the AAU circuit, a precursor to the super-teams that dominate the league. NFL players view “rivals” as potential business partners. Shoot, the player of the decade in the AFC West gifts wine bottles to the Chargers, Chiefs and Raiders. That Von Miller is such a sweetheart.

Tough to imagine Steve Atwater and Dennis Smith cozying up to Al Davis, though.

The last time there was some heat in the 59-year Broncos-Raiders grudge match it wasn’t because of the rivalry. It was personal, between two football mercenaries who, combined, have played for nine teams. It was because Aqib Talib yanked off Michael Crabtree’s gold chain.

Now that’s more like it. So is this: “You can say this is like a little playoff game for them, because if they think they’re going to come in here and just get one, they’re sadly mistaken,” Lindsay said.

Daniel Carlson is the Raiders kicker. He’s from Colorado Springs, a TCA kid. The Raiders won’t say this, but he’s actually there to make them better people. Shouldn’t be too hard.

Tell you what. If these Broncos are for real about turning this thing around, it starts with pushing back against the AFC West. Ever since Super Bowl 50, the Broncos are 9-14 in the division. Same as the Raiders, same as the Chargers. Not the company you want to keep. The Chiefs are cruising along at 21-2.

Now there’s a Broncos youth movement that hasn’t proven anything yet but struts around like a storm’s coming. With Lock firing off Buzz Lightyear lasers and Lindsay yapping his mouth, humility won’t be the next generation’s strong suit.

The Broncos again won’t sniff the playoffs. The Raiders need a half-dozen things to happen to get there, including a Titans loss, a Steelers loss, a Colts win, a lunar eclipse and a partridge in a pear tree.

“We want to win, spoil their chances at the playoffs and end our season on a high note,” Risner said.