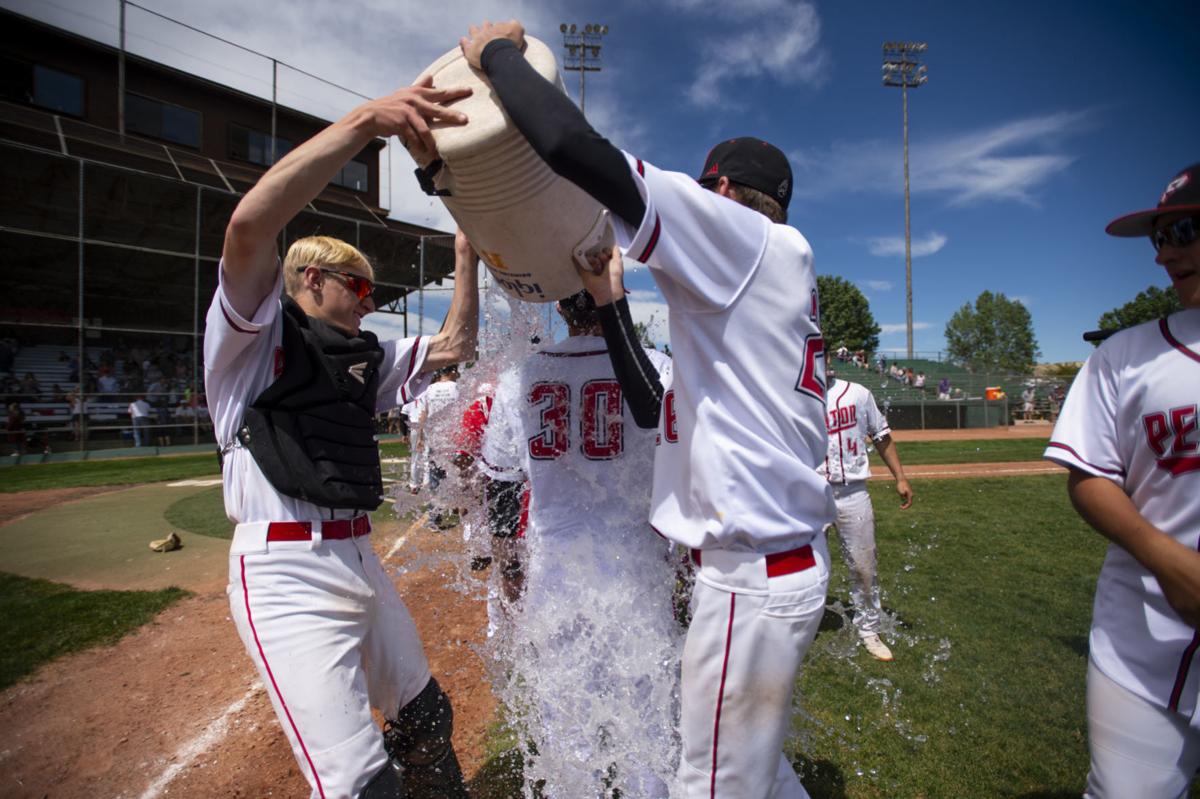 Panthers players dump a water jug coach Kelly Nickell in celebration after their win against the Fowler Grizzles for the Class 2A state championship title. 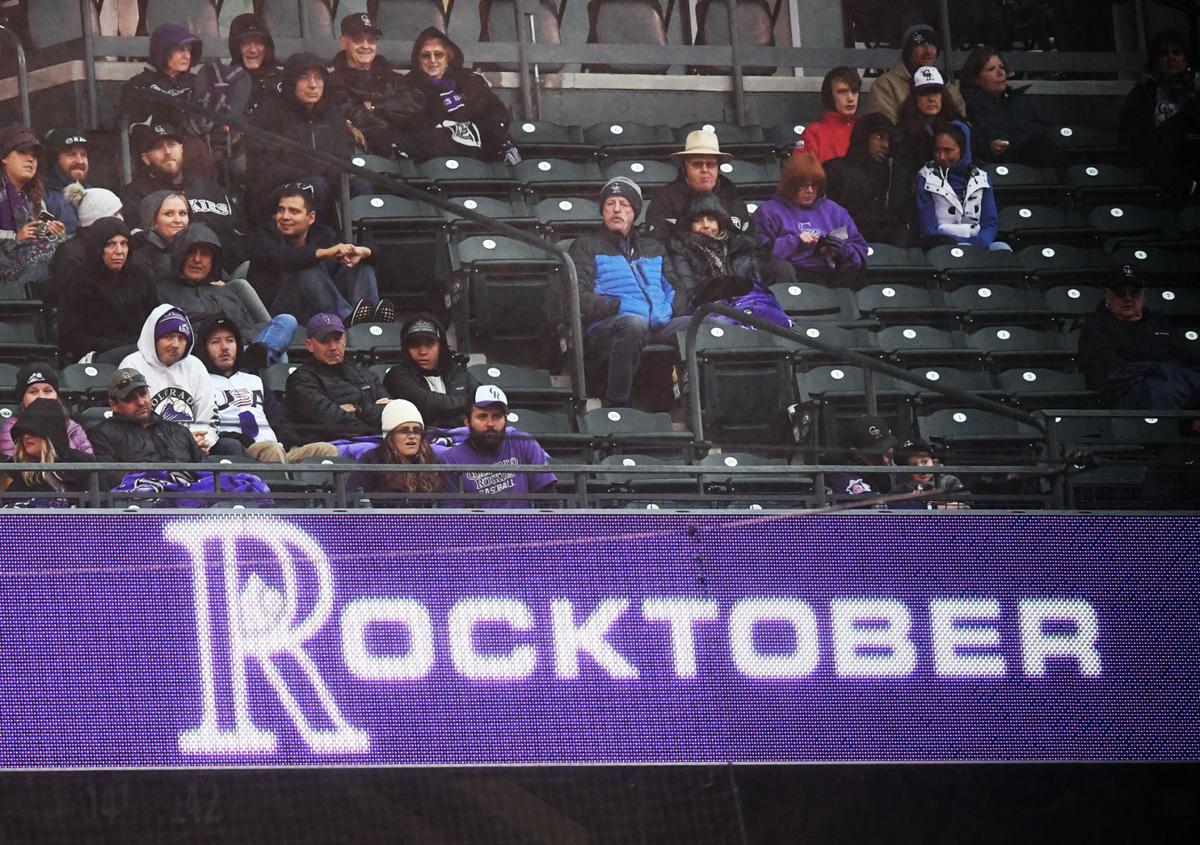 A sad and rainy ending for Rockies fans in the last innings of game 3 of the NLDS at Coors Field on Sunday, October 7, 2018. (Photo by Jerilee Bennett, The Gazette)

Panthers players dump a water jug coach Kelly Nickell in celebration after their win against the Fowler Grizzles for the Class 2A state championship title.

A sad and rainy ending for Rockies fans in the last innings of game 3 of the NLDS at Coors Field on Sunday, October 7, 2018. (Photo by Jerilee Bennett, The Gazette)

DENVER — Go back five, six years, and Peyton High School’s awesome baseball team didn’t have a No. 28 on its roster. That jersey wasn’t in the rotation.

Go back 10, 11 months, and there was a standard summer routine over at Pine Creek: Get the fellas together, play a game, go home, flip on the Rockies game.

Baseball now is faced with a perfect summer storm that could take years to clean up: pandemic rules that dissuade kids from playing at the grassroots level — and an MLB work stoppage that prevents them from watching their big-league heroes. Less baseball in the day, none at night. That's no way to grow the game. That's how you send them elsewhere.

“If you’re a kid and you play baseball, those guys in the big leagues are your heroes. Those are the guys you want to be,” Canon City coach Tim Ritter says. “But because the kids are not actually playing, it makes it that much worse. I think they're frustrated that they're not playing as much and they can't watch it in the evening."

Remember, these are some of the most devoted baseball coaches in the state of Colorado. They commit hours, months, years to growing the game for the kids they adore. Unloading on baseball's problems is hardly a fun pastime.

But Major League Baseball is tiptoeing a tightrope over thin ice, even if Wednesday brought the most promising news of an end to the standoff. Multiple media outlets reported the two sides are nearing an agreement that would shorten the 2020 season to 60 games, expand the playoffs to 16 teams and summon an end to the nonsense. Good, because at the moment nobody’s got time for the nonsense. Dispositions are down, unemployment’s way up. Millionaires’ money is their problem, not ours.

“I’ve got 32 guys that wish they were playing baseball right now,” says Nickell.

Peyton’s ball coach did The Gazette a solid and sent out a text message to his 32 players: What’s your take on this whole MLB mess?

“Honestly, I did not know the kind of response I would get,” he says.

What he got was a comprehensive and varied snapshot of teenage baseball fans as a whole: “selfish,” “I miss it,” and a common theme that should scare the MLB power brokers straight to the negotiating table — with a stack of comp tickets to 18-and-unders when fans can return.

“I know we’ve got several guys that do follow the Rockies and MLB religiously. But most of them don’t,” Nickell said. “What I learned is what they miss is playing with their friends.”

Oh, there’s still some youth baseball. Pine Creek’s loaded again and has a few playing summer ball with Catamount, Slammers and Eagles. Peyton’s studs snuck over to Kansas for a tournament or two. Canon City’s running intrasquad games within the virus rules.

Colorado's government prohibits organized youth sports of more than 25 people due to the pandemic. That means intrasquad scrimmages are OK, games against other teams are not. Plus, there’s the prospect of finding a diamond that's available and welcomes their company.

But you wonder how a summer thin on baseball — playing, watching, forgetting about — impacts its popularity over the long haul. Things change.

Pine Creek takes an annual trip to spring training in Arizona that was canceled in 2020 and put on hold until next year. It was there, during a minor league scrimmage, the boys watched former Pine Creek star Ryan Warner on the mound.

“And the kids were just shocked at the talent,” Millhauser says. "We always thought Ryan was the best pitcher ever. Then you saw six guys come right after him who were just as good. It dawns on you: you’ve got to be really special.”

Has it dawned on pro sports, like baseball, that a legion of lifelong fans is not a given?