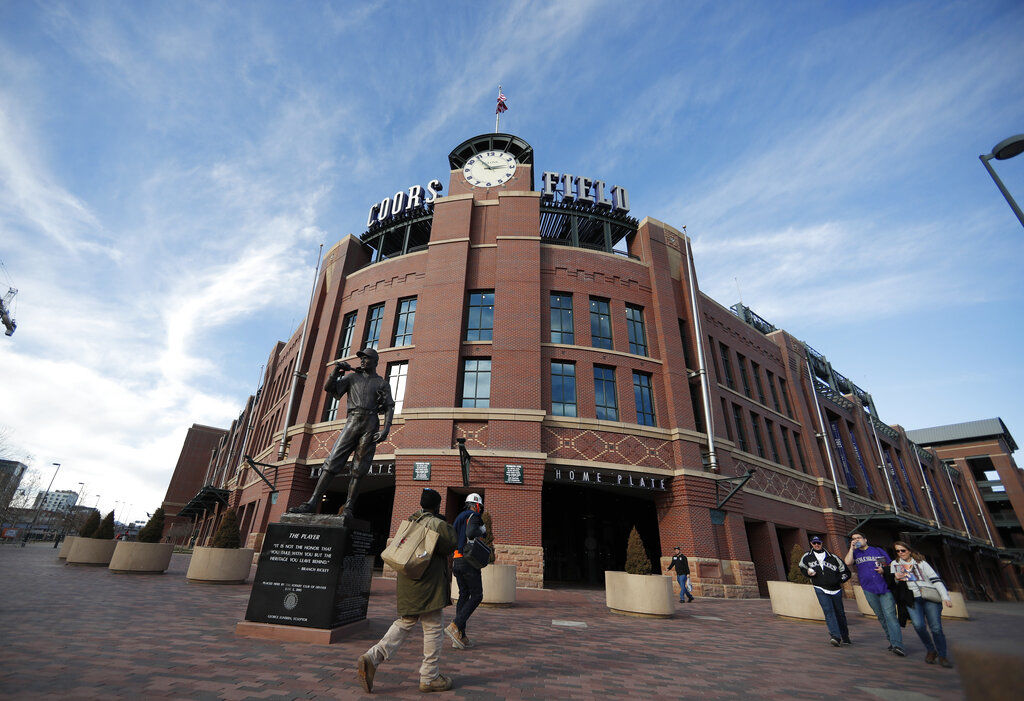 Fans pass by Coors Field during a festival staged by the Colorado Rockies in Coors Field Saturday, Jan. 25, 2020, in Denver. The Rockies are preparing for the opening of spring training. (AP Photo/David Zalubowski) 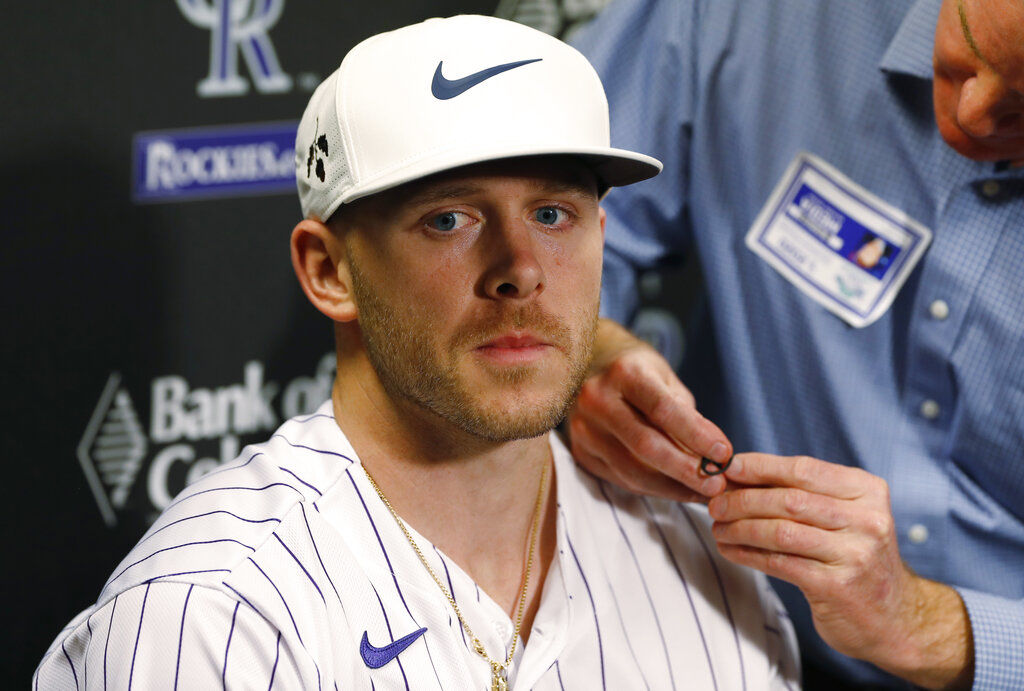 Colorado Rockies shortstop Trevor Story waits for a microphones to be placed on his shirt during a news conference as part of the team's fan festival in Coors Field Saturday, Jan. 25, 2020, in Denver. The Rockies are preparing for the opening of spring training. (AP Photo/David Zalubowski)

Fans pass by Coors Field during a festival staged by the Colorado Rockies in Coors Field Saturday, Jan. 25, 2020, in Denver. The Rockies are preparing for the opening of spring training. (AP Photo/David Zalubowski)

Colorado Rockies shortstop Trevor Story waits for a microphones to be placed on his shirt during a news conference as part of the team's fan festival in Coors Field Saturday, Jan. 25, 2020, in Denver. The Rockies are preparing for the opening of spring training. (AP Photo/David Zalubowski)

DENVER — Saturday afternoon at a sun-soaked Rockies Fan Fest at Coors Field, the front office at 20th and Blake showed what it thinks of the fans who pack the park win or lose, no matter what.

Please, enjoy our heavenly ballpark... but we’re above questions from you baseball peasants.

With Dick Monfort and Jeff Bridich under fire from Salida to Steamboat as the Nolan Arenado saga drifts onward, the owner and general manager dodged a perfect opportunity to address The Question on every ticket-buyer’s mind: Is Arenado going to be here on Opening Day?

One man's hunch: yes, but without a hot start in the standings, the all-world third baseman will be elsewhere to finish the 162-game season.

Instead of taking questions from Rockies media, the liaison to all those anxious fans who plop down their hard-earned bucks, the front office passed the buck. It threw Bud Black and three players into a news conference to be drilled on an uncomfortable issue they can't possibly explain: the combustible Arenado situation.

They were at the same time pros and the opposite of thrilled. Yet while it’s not their fight to be fighting, they were positioned as team spokesmen to fight it. So I asked Black, who should be a politician once baseball bores him, what it’s like for a manager to hear his best player reportedly is on the trading block.

“When that sort of broke in San Diego in the winter meetings.... You know what’s funny?” said Black, the most diplomatic man in Colorado. “As a manager behind the scenes you hear a lot of stuff. Like, all the time. And none of it ever happens. I mean, a lot! I’ve learned if something is really close to happening or really serious, somebody who is really know sort of tells me. And that never really happened.”

It’s good news for Arenado fans that Black showed zero anxiety for the Arenado-Bridich standoff that erupted when Arenado last week told MLB.com, “There’s a lot of disrespect from people there that I don’t want to be a part of.”

Then again, Black’s the kind of cool cat who’d warm his hands on a live volcano as it erupts.

“As you guys know, that kind of thing (trade talks) sort of gets a life of its own. One day you hear something and something and then it snowballs,” Black said. “That’s how I look at a lot of those things.”

The 2020 edition was the strangest Rockies Fan Fest to date. While kids in No. 28 jerseys and casual fans Instragram'ed the best part of this organization, Coors Field, the diehards in the building wondered why the All-Star third baseman paid $260 million wants a ticket out.

Rockies fans deserve better than to be left guessing. When the going’s gotten rough at 20th and Blake, I’ve often sided with Bridich — mostly because sustained winning at 5,280 feet so far has proven to be impossible, no matter the general manager making the decisions.

Want to know if a franchise gets it or not? Watch how they handle the bad times. If there’s grimy news with the Avalanche at Pepsi Center or the Broncos at Dove Valley, Colorado’s championship franchises get out in front of it. They put Joe Sakic or Jared Bednar front and center, John Elway or Joe Ellis front and center, and tackle the questions that fans want answered. This Rockies ownership group and front office instead left the players and managers to face the music.

What's so hard about calling Arenado and explaining why the Rockies are the only team in baseball that's gone through this offseason without signing a free agent to a major-league contract? There's something about human-to-human conversation that soothes hurt feelings.

Kyle Freeland got quizzed on Arenado. All-Stars Trevor Story and David Dahl did, too.

Boy, I bet those ballplayers were thrilled about doing the front office’s dirty work for it.

“It’s a new season, a new slate,” said Freeland, who reports to spring training along with the pitchers and catchers on Feb. 11.

Black said he left a message on Arenado’s phone but hasn’t spoken to Arenado. The manager suggested the animosity will pass when Arenado reunites with teammates at spring training, that a baseball clubhouse will recruit him back.

“I do know when players get together — when the team gets together — there are ties that bind teams,” Black said.

The lack of communication between pay grades remains the most perplexing element of all. The first guy in the loop should be the manager whose lineup card is anchored by Arenado. Yet Black learned of the trade rumors when you and I did, during baseball's winter meetings.

"Things are going to be fine," Black said. "Players, they stay united."

You don’t learn the stability of a franchise when it’s winning. That's the easy part. You learn after a 71-91 season that rolls into a prolonged melodrama with an infielder who someday will join Larry Walker in the Hall of Fame.

So enjoy the heavenly ballpark... but don't question the operation. Rockies brass is above your questions.