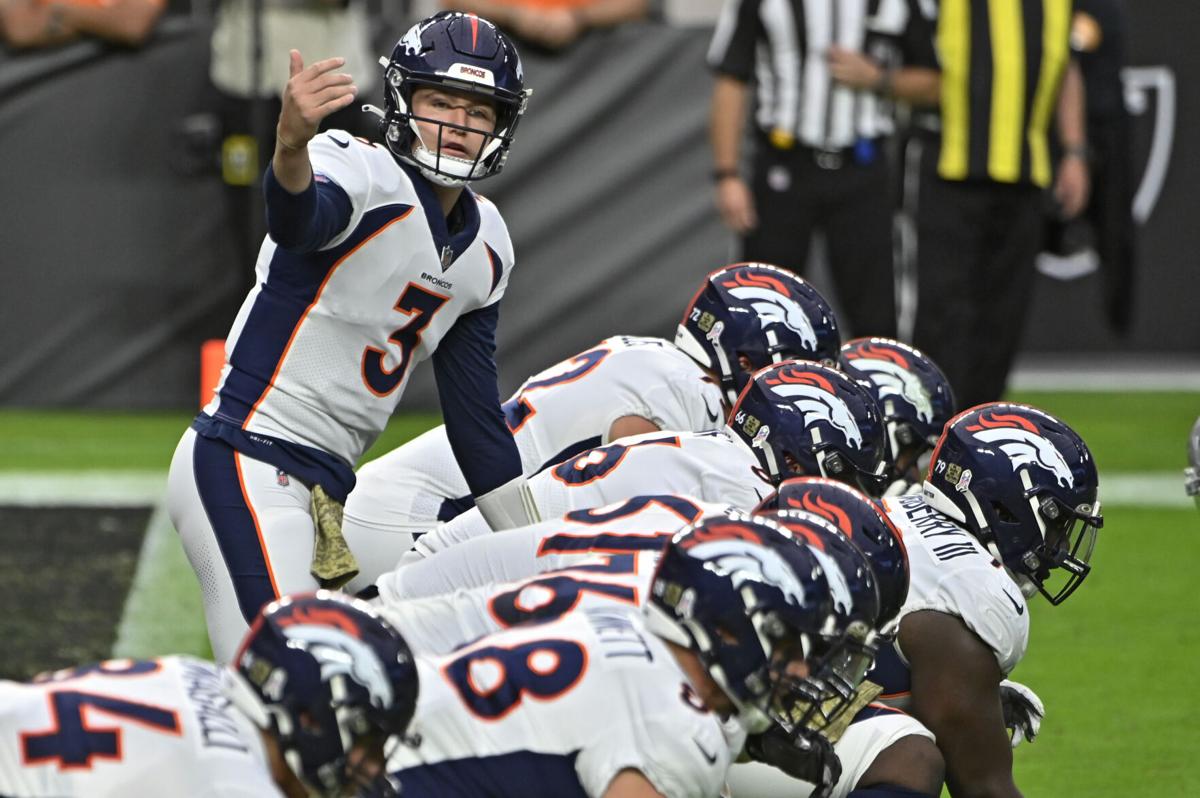 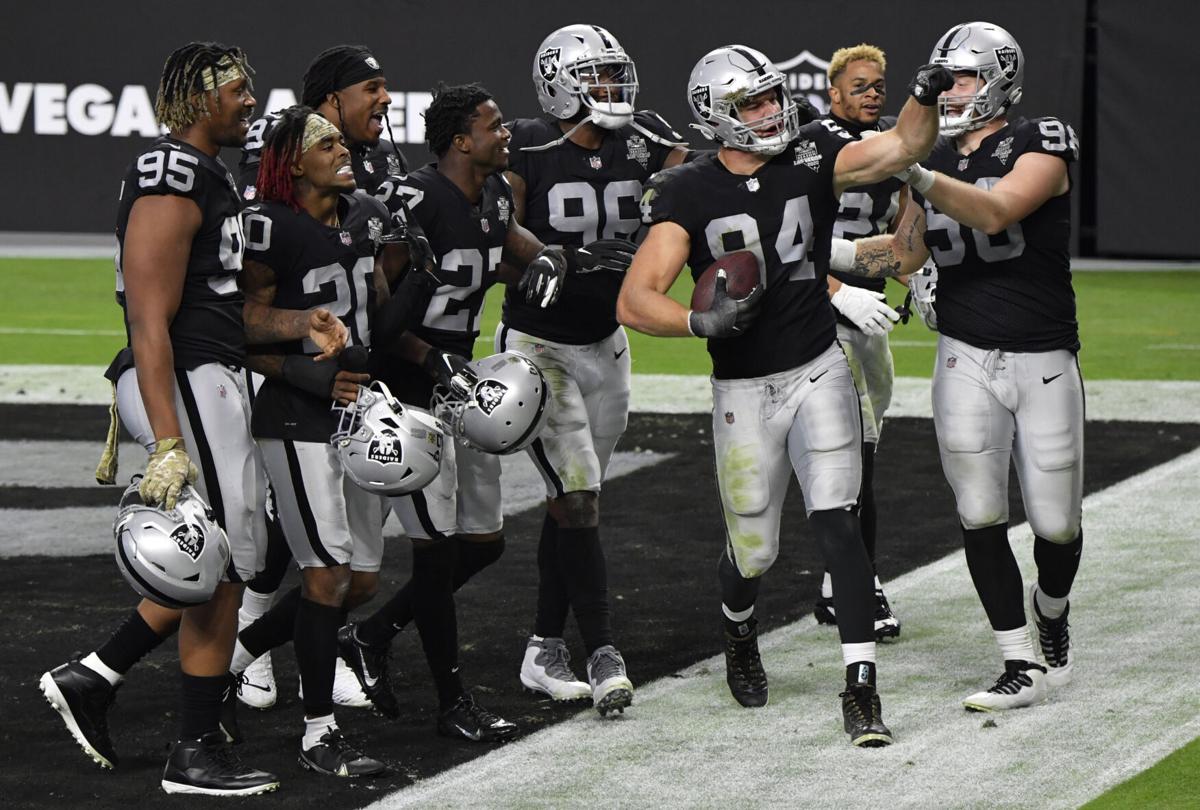 Las Vegas Raiders defensive end Carl Nassib #94 celebrates with teammates after intercepting a pass during the second half against the Denver Broncos during an NFL football game, Sunday, Nov. 15, 2020, in Las Vegas. (AP Photo/Jeff Bottari)

Las Vegas Raiders defensive end Carl Nassib #94 celebrates with teammates after intercepting a pass during the second half against the Denver Broncos during an NFL football game, Sunday, Nov. 15, 2020, in Las Vegas. (AP Photo/Jeff Bottari)

This all goes back to John Elway and, for a rare time, not in a good way.

No. 7’s final football comeback is out of reach.

On their first go-round through the AFC West, the Broncos were not competitive vs. the Chiefs (43-16) ... the Chargers (24-3 for most of three quarters) ... or the Raiders (the latest disaster).

The Broncos are 3-6 for the fourth straight year, and about the only common thread is Elway and the team's front office. They are still in search of a quarterback after Drew Lock did his Friendly Jay Cutler thing again with four interceptions. They are beset by injuries and a misunderstanding of the standard around these hills.

The 2020 Broncos are plummeting nowhere fast.

Inside the brand spankin' new Allegiant Stadium, Las Vegas was better than Denver on almost every possession and at almost every position — QB, RB, TE, OL, DL, LB, safety, coach, general manager, ownership. They’re young, but these Broncos are getting old.

One man’s, in particular. Given the Broncos' egregious and virtually impossible injury situation, it’s not fair to saddle Elway with all the blame after a recurring, maddening, predictable return to losing. But life’s not fair. After this blowout, neither is the Broncos-Raiders rivalry.

The Raiders were so much better than the Broncos it hurts. The final score is a poor reflection of how the game actually played out. It should have been worse. The Raiders dropped two sure touchdown passes and had a punt return for a touchdown called back on a penalty. They still won by almost four touchdowns.

Tradition is lost on the Broncos' youth. They are soaking in the franchise’s history of winning without knowing what it took to achieve. In the two games since Phillip Lindsay called out Broncos fans for booing the home team at Mile High, Lindsay is averaging 1.9 yards per carry. Pay the man? Shoot, the Broncos couldn’t even play the man. Lindsay had four carries Sunday. Total.

Maybe Broncos Country had a point, after all.

In his last five games as the great quarterback hope, the 24-year-old Lock has nine interceptions. His four picks on Sunday came against a Raiders 'D' that had five takeaways all season — interceptions and fumbles included.

The Raiders defense caught as many Lock throws as Broncos rookie stud Jerry Jeudy did.

“I just didn’t put the ball in our receivers’ hands,” Lock said. “I put it in their hands.”

With seven games to go, "QB" still should be very much at the top of the Broncos’ draft board. Lock is going backward, literally and figuratively, anointed the savior too soon.

“We don’t know what the reasoning was but that was unacceptable from an offensive standpoint,” offensive lineman Dalton Risner said.

The Broncos left Las Vegas like so many young men before them — beaten, dejected, in pain. Hope they skipped the blackjack table. They can’t count. On one snap, a Raiders touchdown, the Broncos had 10 players on the field. On another, they had 12. Protocol remains 11, since protocols are all the rage these days.

I suggested last week the second half of the Broncos season would be a bumpy ride. I would like to amend that expectation: flying-over-the-Front-Range-during-those-Friday-winds bumpy.

There is no reason to bench Lock now. If he reverses course and flashes promise, super! If he continues to emulate Friendly Jay Cutler, you score a higher pick and draft the next QB hope.

“We’re going to continue to play him,” Fangio confirmed.

This must be terribly tough on Elway, but it also has been terribly tough for diehards — for almost half a decade. At this rate the 3-6 Broncos will not win another game. They likely will be underdogs in the final seven. Worse yet, the Broncos don’t seem to grasp the urgency of NFL timelines, especially around here.

Elway was not at the “Death Star” Sunday after a positive COVID-19 test resulted in “only mild symptoms,” the team said. His return to the office at Dove Valley last week was great news. But there must be a shakeup, new eyeballs, new philosophies, new blood, added to the front office after this season ends. The Broncos aren't the Broncos anymore. They're a scrimmage.

“We’ve got to get this (expletive) turned around,” cornerback Bryce Callahan said.

The word “unacceptable” comes to mind.

Woody Paige: Add Denver Broncos fans to those who can't wait for 2020 to end

The Broncos can’t even count correctly to 11. Didn’t anybody here ever watch "Oceans Eleven'' or play craps and blackjack?