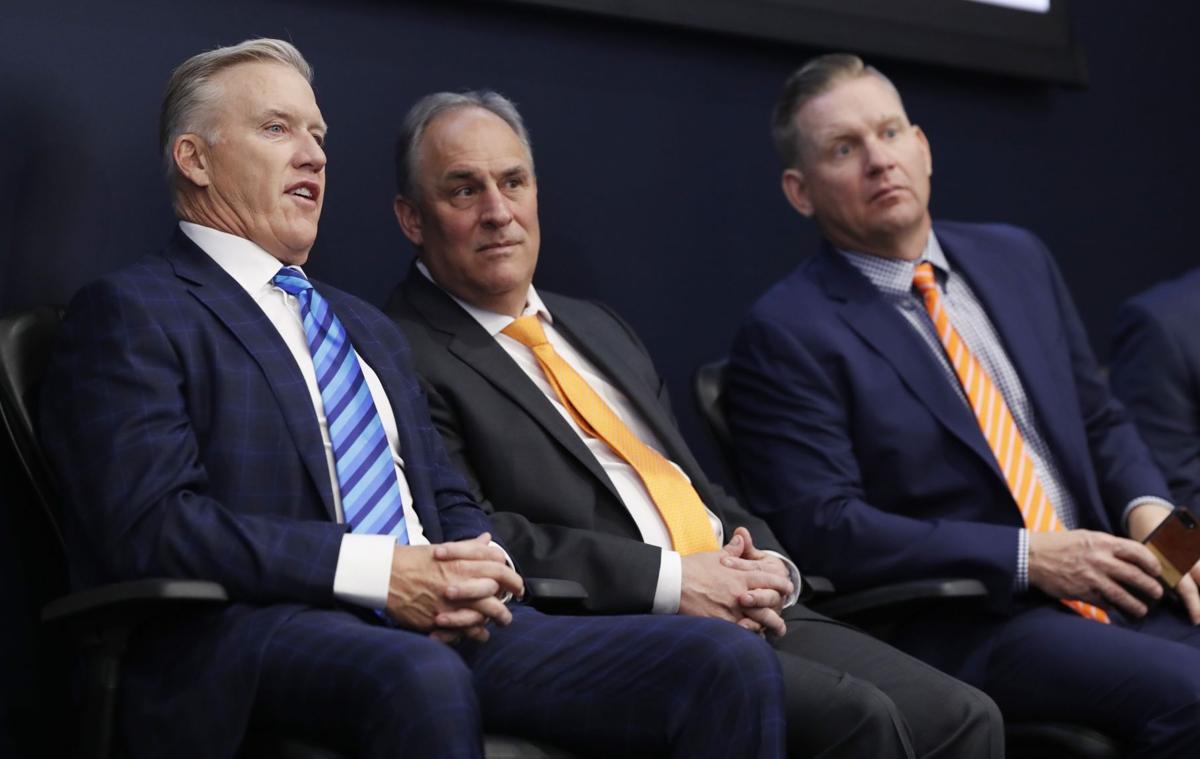 From left to right, Denver Broncos' general manager John Elway confers with head coach Vic Fangio as Matt Russell, head of player personnel, listens in as the team's first-round selection in the NFL Draft, Noah Fant, a tight end out of Iowa, speaks during a news conference at the football team's headquarters Friday, April 26, 2019, in Englewood, Colo. (AP Photo/David Zalubowski) 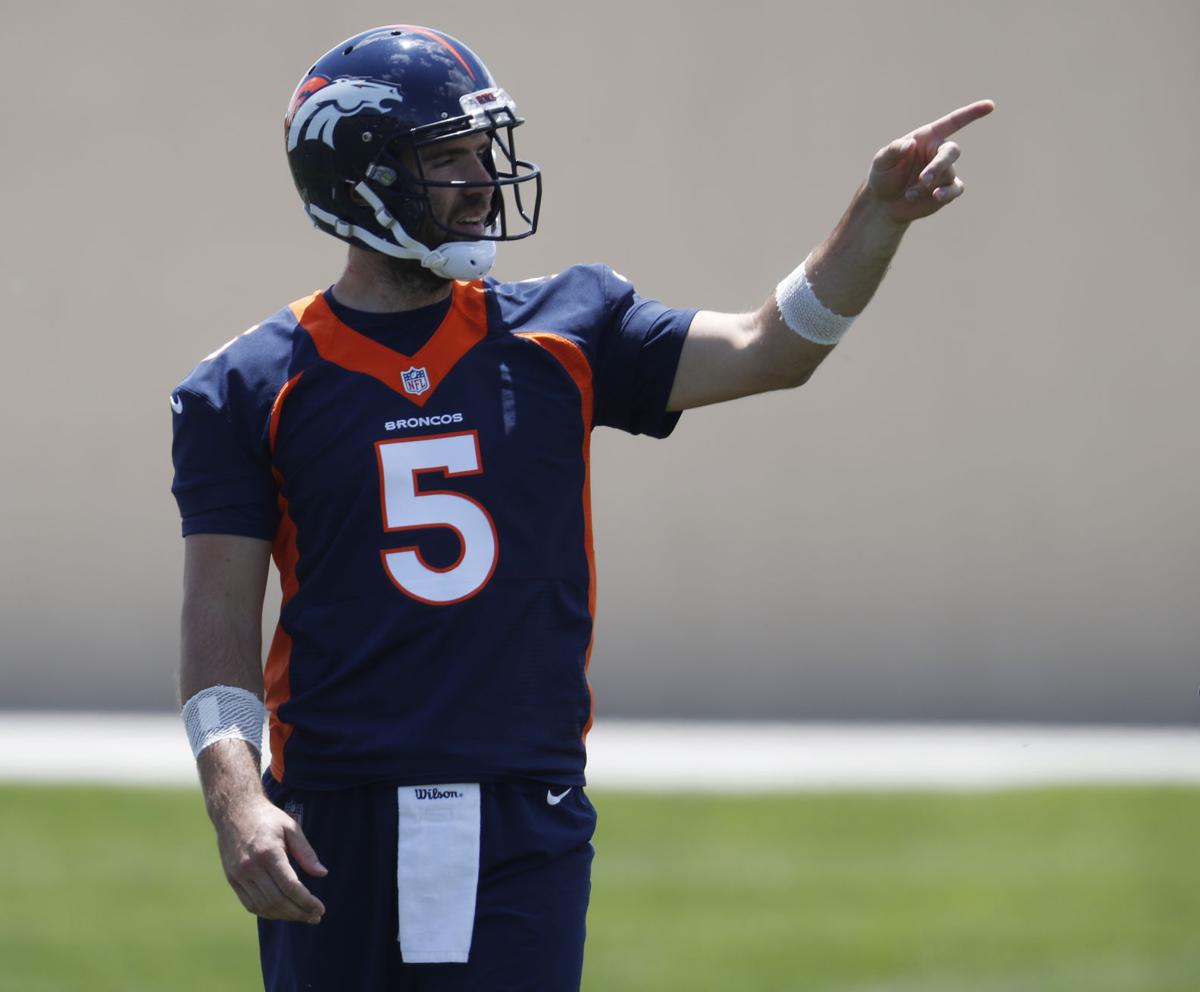 From left to right, Denver Broncos' general manager John Elway confers with head coach Vic Fangio as Matt Russell, head of player personnel, listens in as the team's first-round selection in the NFL Draft, Noah Fant, a tight end out of Iowa, speaks during a news conference at the football team's headquarters Friday, April 26, 2019, in Englewood, Colo. (AP Photo/David Zalubowski)

DENVER • There’s been the losing, of course.

Over 16 made-for-TV seasons as Colorado’s quarterback, he lost more games than he won exactly twice. Twice! Didn’t lose much. Went 162-90-1, in fact, a ridiculous win percentage that ticked off every jealous fan base that swore his name from K.C. to Oakland to New England.

Shoot, he went 11-0 against the Patriots. Ahem.

This was a radical departure from Elway’s presentation of the last coach-quarterback combo. The Vance Joseph-Case Keenum pitch always felt like Elway was trying to sell an idea that he didn’t even believe in. It always felt anxious. Felt excuse-y (“Drinking through a water hose” he’d say of Joseph). Felt forced. Felt very un-Elway.

Not this time around.

This time around Elway let the players and coach do the yapping. He gave quick answers and stepped aside, into the background, so Von Miller and Chris Harris Jr. could tell Broncos Country how motivated they are to avoid all that losing we were talking about. He let Fangio explain his old-school, sensible blueprint to erase the 11-20 record of the VJ era.

“I’d like for us to be a team that plays hard, plays smart, plays intelligent, plays good at crunch time and critical times of games, knows how to play situational football,” Fangio said.

And hope Elway’s quiet confidence is right, too. Because the general manager’s reserved approach to the kickoff news conference flies directly in the face of what this season entails.

This season is all about Elway. For a lot of people here, it’s either a breaking point or a breaking-out point. There’s no Keenum or Joseph for fans to pin as scapegoats. (To his credit, Elway went out of his way to shift the blame of back-to-back losing seasons off Joseph: “We didn’t win like we needed to win.”) The new coach and the new quarterback are accomplished veterans of the NFL. Lose this time, it all falls on Elway.

And Elway guaranteed nothing. His message had more “we’ll sees” than a blind date that’s over before the cocktails arrive.

Is Drew Lock finally going to sign? (The rookie quarterback did sign, 3 hours later, and will wear a No. 3 jersey in practice Thursday.)

“Nothing surprises me anymore,” Elway said.

Nor could it. Let’s repeat that number from a minute ago: 25 years. Elway’s been with the Broncos for 25 years. Twenty-five years is longer than 47 players on the Broncos roster have been alive. It’s longer than 22 NFL stadiums have been around. It’s long enough to wonder: how come I’m not playing golf, instead of explaining myself to a tent full of media who snicker behind my back that I’ve lost my touch?

Since I’m sure you’re wondering what I would do with three Super Bowl rings and millions in my bank account, here it is: not what Elway’s doing. Not running an NFL team. Not introducing the greatest legacy in Colorado sports to the possibility of ridicule. I’m playing 36 holes a day. Fishing the Arkansas, Gunnison, Colorado and South Platte rivers. Fostering seven dogs. Maybe eight.

Not Elway. He’s on a mission to show you how wrong you are. In his 16 years at quarterback the Broncos won more games than the Raiders have won in the past 25 years. In Elway’s eight years as general manager they’re 84-54 — fifth-best in the league from 2011-2018.

But lately they’ve lost that winning feeling. They had a quarterback, Keenum, who wrote a book about his journey before he became a full-time NFL starter. They had a linebacker, Brandon Marshall, laughing it up after a loss to the dreadful 49ers. They’ve had more entitlement than coaching continuity.

Oh, and talk about new: Elway had two losing seasons as the quarterback. He’s had two straight as the president of football operations.

“We’ve got a lot of work ahead of us,” Elway said.

June 28, Elway turned 59. He’s one year, 10 months younger than Fangio, the coach he hired who’s brought “maturity” to a locker room that got fat and happy after Super Bowl 50.

You’re going to love Fangio. His confidence, wit and no-baloney approach has been a refreshing turn after two years of losses, penalty flags and kicking field goals against the Browns.

“I think he’s got more to give,” Fangio said of Von Miller, who took the latest Vic poke in stride.

There was no bravado at Dove Valley. No remember Super Bowl 50, no check out my ring. The show-me-don’t-tell-me vibe began with Elway, as if he is comfortable with Fangio, a NFL lifer, running the show. Elway likes the potential of this Broncos team more than most. He didn’t sound like a man trying to sell the fans on a wild dream. He sounded like he believes this team will sell itself. Hope he’s right, because all the losing isn’t the worst new thing running through Colorado.

Shaming John Elway is. It’s on him to make new a thing of the past.

Columnist Woody Paige says rookie quarterback Drew Lock would be hurting his cause if he holds out for a few hundred thousand dollars instead of reporting to camp Wednesday or Thursday.