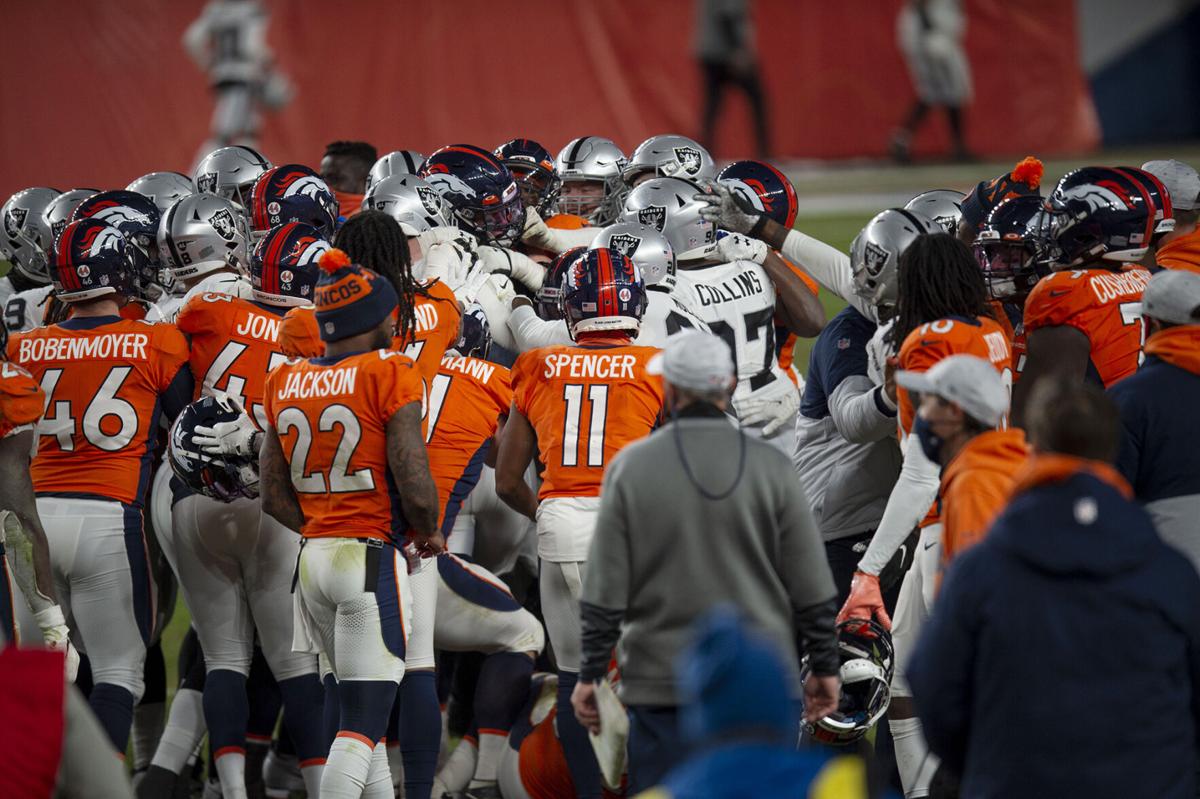 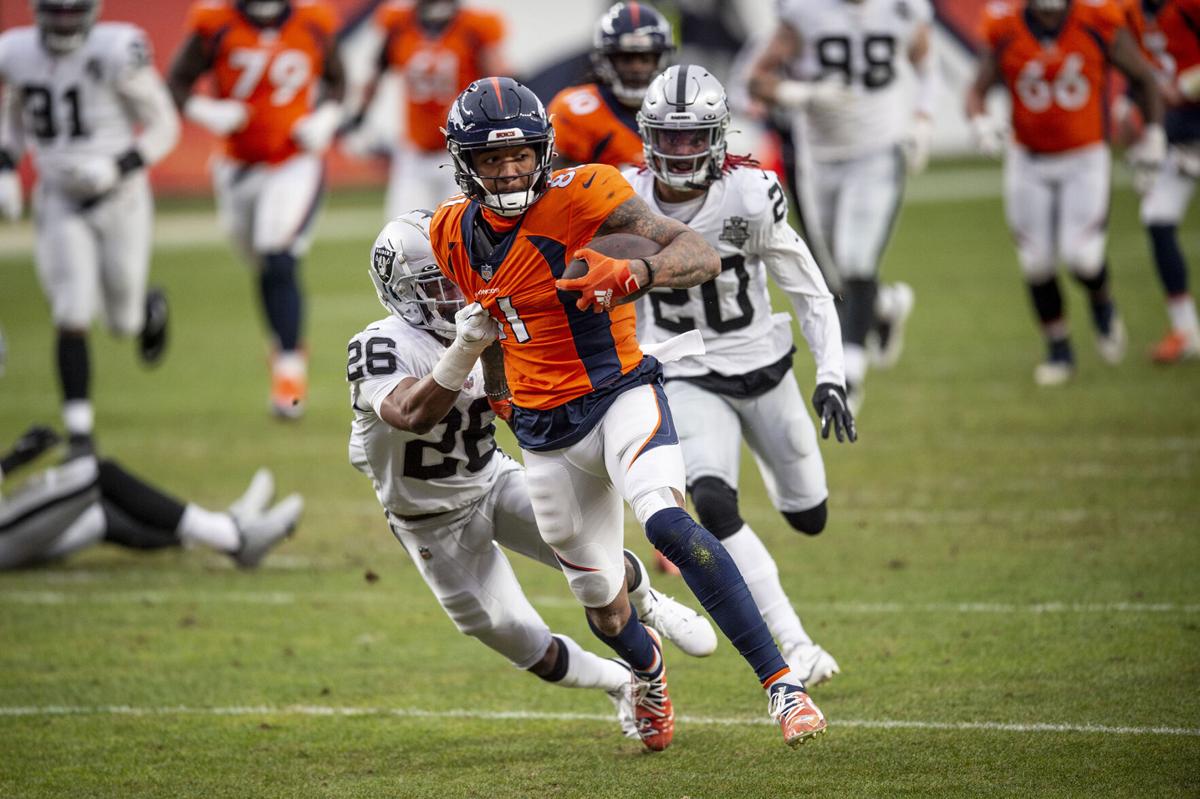 That’s how they view the lost season, anyway.

Vic Fangio, the coach, and Drew Lock, the quarterback, are in all probability going to be back in 2021. That decision won’t be based on merit. There's no way it could be. The coach needs a timeout buddy in the worst way, and the QB needs to get a heck of a lot better after one of the worst QB seasons in Denver.

“There’s without-a-doubt optimism,” said Lock, Mr. Sunshine right up till the final defeat Sunday, a 32-31 loss to the Las Vegas Raiders that finished the Broncos at 5-11 and last in the AFC West.

If you missed the first 15 games, the final 2 minutes of the finale at Mile High offered a handy summary of the 2020 Broncos. With the Raiders in total confusion and chaos in the huddle before a 2-point conversion that later would win the game, the Broncos called timeout. Let 'em off the hook! It was one of those decisions where I stopped to think for a second to make sure I wasn’t missing the obvious. That happens with Fangio and Lock way too much: Whaaa? Wait. Did he? Why?

This is how Fangio explained the timeout that bailed out the Raiders: “Wanted to make sure we had the ideal personnel in there for us. With that little time left I thought it was important there to burn the timeout, so we were straight what we were doing and what they were doing.”

All that is kind of whatever at this point. Thanks in part to the timeout, the Broncos secured a top-10 pick in the draft. (That crafty Vic.) And it’s guaranteed Broncos Country will see Clemson star quarterback Trevor Lawrence next season. By virtue of a last-place finish, the 2021 Broncos will play the Jaguars, who will draft No. 1 overall, and the Jets, who pick second.

That’s one way to Tank for Trevor, I guess.

But the Broncos lost more games than they won for the fourth straight season. That’s not a resume the Broncos of the past would reward with a mulligan. That’s a resume a coach or QB would hide on a job application next week. That's a resume where you lose your access key to the team facility. See what I’m getting at? When star players like Von Miller and Courtland Sutton began dropping like flies, when the Broncos were forced to play the Saints without a quarterback, when it became very clear that Lock wasn’t even close to ready yet ... the Broncos decided 2020 doesn’t count, and let’s just make it to the finish line in one piece.

This Broncos season was a failure, even if the continuity that’s going to follow in the offseason suggests otherwise. But in the big picture this NFL regular season was a success that probably won’t be portrayed as such in other spaces. Sure, the Broncos had the Patriots game moved around due to COVID-19 issues in New England. But the league as a whole conducted its usual 256-game schedule without a single cancellation, and would you have predicted as much during the August angst? That’s a serious accomplishment that’s worth a mention, if you ask me, and not just because of all the Negative Nancys who said this season wouldn’t or shouldn’t be played. They were wrong, again.

Not to steer the conversation away from the Broncos losing a game in which they collected four turnovers and committed none, but this was some kind of feat the NFL just pulled off. And by NFL, I mean the individual employees of the NFL. There was a ton of doubt a league with 1,700 players and 500 coaches and massive support staffs would get through this season. Yet here we are, with only 222 COVID-19 positive tests for players after 888,510 tests were administered. It was an enormous effort, and not just in that teams chartered larger airplanes and reserved more hotel space for road games to spread out the bodies. Think about the wives and families of support staff who aren’t getting paid like Bradley Chubb or Vic Fangio but couldn’t afford to test positive and risk the team facility getting shut down.

In the end it was a business decision, and NFL business booms. NFL games made up 33 of the year’s 50 biggest TV audiences, according to reports. The NBA Finals and World Series didn’t crack the top 100. The NFL is king and queen.

I don’t view this Broncos season as if it didn’t count. They got swept by a bad Raiders team for goodness sakes. Ask me, and quarterback should be the top priority this offseason. Lock finished second-to-last in QB rating among qualified passers. And while Fangio has yet to prove he’s a quality coach, not just a quality defensive coordinator, losing seven starters on defense is kind of a big deal.

But can Fangio at least hire a timeout buddy? Guy only has to work once a week. Give him a handy-dandy flip chart. There, problem solved.

"Personally, I think I did a helluva job," defensive lineman Dre'Mont Jones said.

Good for Dre'Mont, but John Elway's Broncos didn't do a helluva job — except when it came to navigating and finishing a COVID-19 season with more twists and protocols and craziness than any we've seen before. The season got played, and that sure beats the alternative.

Woody Paige writes: If this were soccer’s Premier League, the Broncos would deserve to be relegated to the junior varsity league. If the Broncos had an owner, heads would roll again. If the Broncos were sincere, they would apologize to everyone in Colorado.