FILE - In this Dec. 29, 2019, file photo, Denver Broncos quarterback Drew Lock gestures after an NFL football game against the Oakland Raiders in Denver. While stressing that Lock has "a long way to go" after spending the first half of his rookie season on injured reserve with a thumb injury, Denver Broncos president of football operations and general manager John Elway said he feels he's finally found a worthy successor to Peyton Manning. "Now is the fun part of trying to fill around him," Elway said. 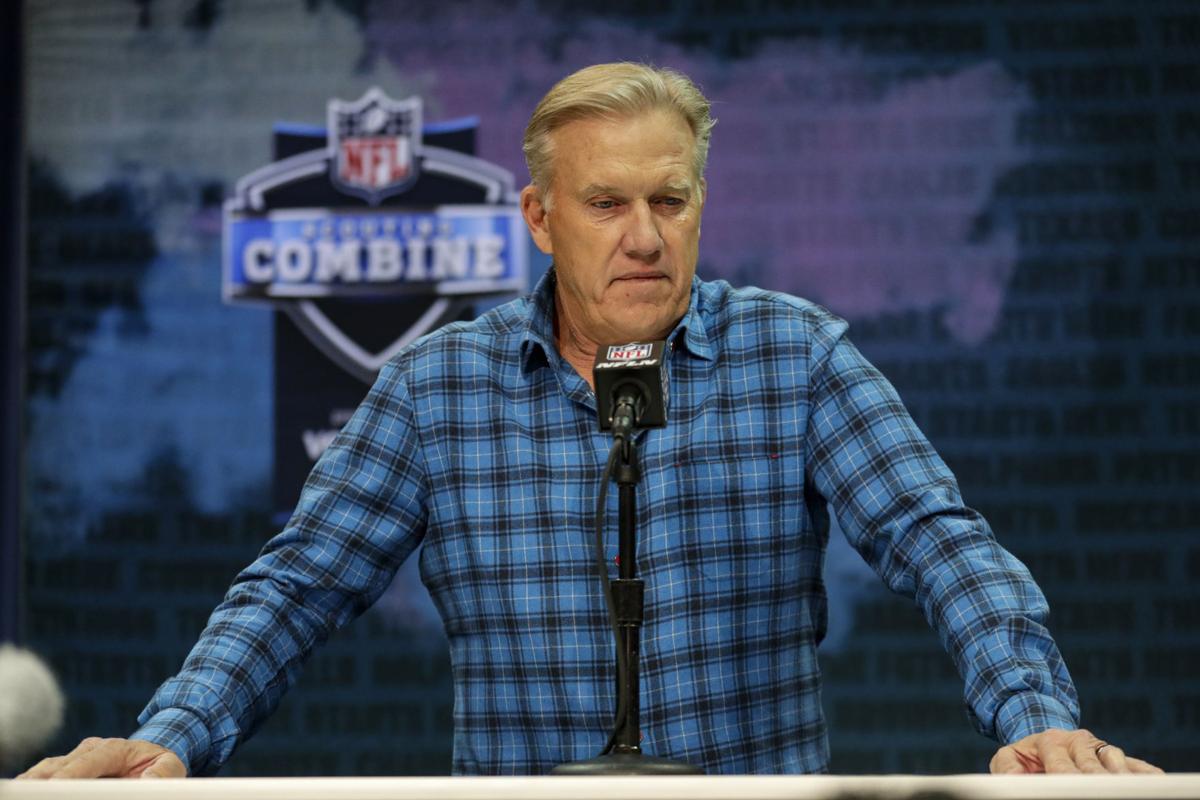 FILE - In this Dec. 29, 2019, file photo, Denver Broncos quarterback Drew Lock gestures after an NFL football game against the Oakland Raiders in Denver. While stressing that Lock has "a long way to go" after spending the first half of his rookie season on injured reserve with a thumb injury, Denver Broncos president of football operations and general manager John Elway said he feels he's finally found a worthy successor to Peyton Manning. "Now is the fun part of trying to fill around him," Elway said.

No, his Cherry Hills living room is just configured for an NFL draft in the age of social distancing. The Broncos' boss is either ready to command the Space Force or draft a stud receiver with the 15th overall pick.

“I’m sure there will be a glitch here and there,” Elway said Monday from a living space that’s been redecorated to fit the unusual times.

The comfy couch is gone, replaced by eight big monitors. Laptop, iPad, landline phone. The first quarantine-style draft runs Thursday through Saturday, and the Broncos bosses are wired. And which way will they go with the No. 15 pick — up, down or stay right there (doubtful)?

“I think we’re preparing to go in either direction,” said Elway, who has traded his first-round pick four times as the top decision-maker at UCHealth Training Center.

But his response to the Drew Lock question — “We feel that he’s that guy” — suggests a little help for the young quarterback, such as an elite wide receiver like Alabama star Jerry Jeudy, is very much in play for the Broncos.

“There are some (free agent) quarterbacks that are still available, but we decided we’re going to build around Drew and give him that opportunity to take the job,” Elway said.

And who cares if there’s a glitch when the draft goes off as planned? Every rollout comes with risk. Thrown a curve ball with a pandemic, the NFL is going back to work while knowing unknowns are sure to arise. Sounds like a plan to me.

When it comes to the overdone production that is the NFL draft, entertainment value is the obvious No. 1 pick. Instead of draft picks being shuttled on a boat to a stage on the Las Vegas strip, they've left open the possibility of a fussy 2-year-old interrupting a trade proposal for Odell Beckham Jr. So how about it? Let's get weird. Conducting a draft while teams are locked into the same space as Buster, the family dog, sounds like reality TV at its best.

Every episode of “The Bachelorette” needs a bad boy, anyway. We've got Roger Goodell.

As the threat of the coronavirus continues to shackle our lives, who has a greater need for a memorable draft: the Broncos or America’s sports fans? Watching ESPN’s Michael Jordan documentary, what’s missing in our sports lives became crystal clear. It’s not the final score. It’s the competition, and the draft will be the closest we’ve seen in over a month. Perfect timing.

Then there’s Elway. He’s always been better off-script. It was that way as a fearless quarterback on a broken play, and it was that way when his driver defied him off the tee during a qualifying round for the U.S. Senior Open at The Broadmoor. A draft without the usual Pro Days and stacks of info on 40 times is all about making birdie from the woods.

You would think a lifer like Elway, who’s been drafting players for the Broncos for almost a decade, would be more comfortable in the same ol', same ol' routine. That's not the case at all. Elway is all kinds of fired up for an unprecedented draft that will have Vic Fangio in Greenwood Village while Elway’s in Cherry Hills. Elway's appraisal: No biggie.

“It’s just been a matter of adjusting,” he said. “I think a lot of times we get set in our own ways and get set in our routines and all the sudden, when that gets disrupted, things become more difficult. For the most ... we’ve been trying to be flexible.”

The Broncos are on the clock at No. 15 in the first round and nine times (for now) after that: Nos. 46, 77, 83, 95, 118, 178, 181, 252 and 254. They’re trying to extend the momentum of a 4-1 finish to last season. Nail this draft like they hit on the ’18 and ’19 drafts and the Broncos are back in business. Add a star receiver like Jeudy or a defender like Oklahoma's Kenneth Murray to Courtland Sutton, Bradley Chubb, Drew Lock, Noah Fant and Dalton Risner and returning the Broncos to the postseason can become a reality.

Whiff, and you’re back in the hole that was four seasons without a playoff berth. Yes, it's a big draft for the Broncos.

While I prefer the Broncos select another offensive lineman in the first round to protect Lock, or a stud defender to round out Vic Fangio’s defense, the fascination with a virtual draft is more about the “how” than the “what.”

How do you avoid a glitch when nobody in the entire NFL is in the same room? The idea of a front office spread all over the Denver metro area sounds like a fantasy draft with your college buddies. But the NFL payout is slightly more than a case of Busch Light.

Anyway, the how: before, during and after the draft on Thursday (6 p.m.), Friday (5 p.m.) and Saturday (10 a.m.), Elway will be joined at his home by Tony Lazarro, the director of football information systems. At all times, at least one of the eight monitors will connect Elway to director of player personnel Matt Russell, coach Vic Fangio (who will be joined at home by Russ Trainor, senior vice president of IT), salary cap guru Rich Hurtado and college scouting director Brian Stark. One monitor shows trade values, another shows their player rankings, another shows the draft needs of their rivals. And on and on.

Elway’s living room has been transformed into football nerd heaven, a sportsbook without wagers. Come to think of it, we all have friends who would go these lengths for a fantasy draft.

“We’d love to get the best player on the board at a position of need,” Elway said.

Do that again, and the virtual draft arrives at the perfect time — for America’s starved sports fans and for the Broncos. The NFL's on the clock.

Projecting top-five picks Chase Young and Jeffrey Okudah as future NFL stars? That’s easy. What the Broncos need is value — at the No. 15 pick and beyond. The Gazette’s Paul Klee has five prospects he would love to see in Broncos orange:

John Elway’s focus on “character” guys speaks to this ’backer, a rare sophomore captain at OU. Plus, his nickname is “K9,” and you can never have too many dogs.

ESPN’s Mel Kiper suggested the Packers, at No. 30, are a fit for Reagor. John Elway possesses the draft capital to move back into the first round to pilfer him.

OK, OK. So the Broncos aren’t using a first- or second-round pick on a QB. That’s cool. But let’s hope the Raiders don’t get smart and snag this Air Force nemesis.

Easy, Drew Lock fanatics. We’re not drafting Perry to play QB. We’re taking him as a do-it-all threat — before Bill Belichick, an Annapolis native, pounces on him.

The boom-bust pick of the draft. Air Force “limited” Shenault to eight catches for 124 yards in a Falcons win. He’s a Pro Bowl talent. But is he worth the injury risk?

Broncos draft history: A round-by-round look at hits, misses and tidbits that might surprise you

The Gazette's Brent Briggeman takes a deep dive into Denver's NFL draft history, revisiting highlights and lowlights from each round.