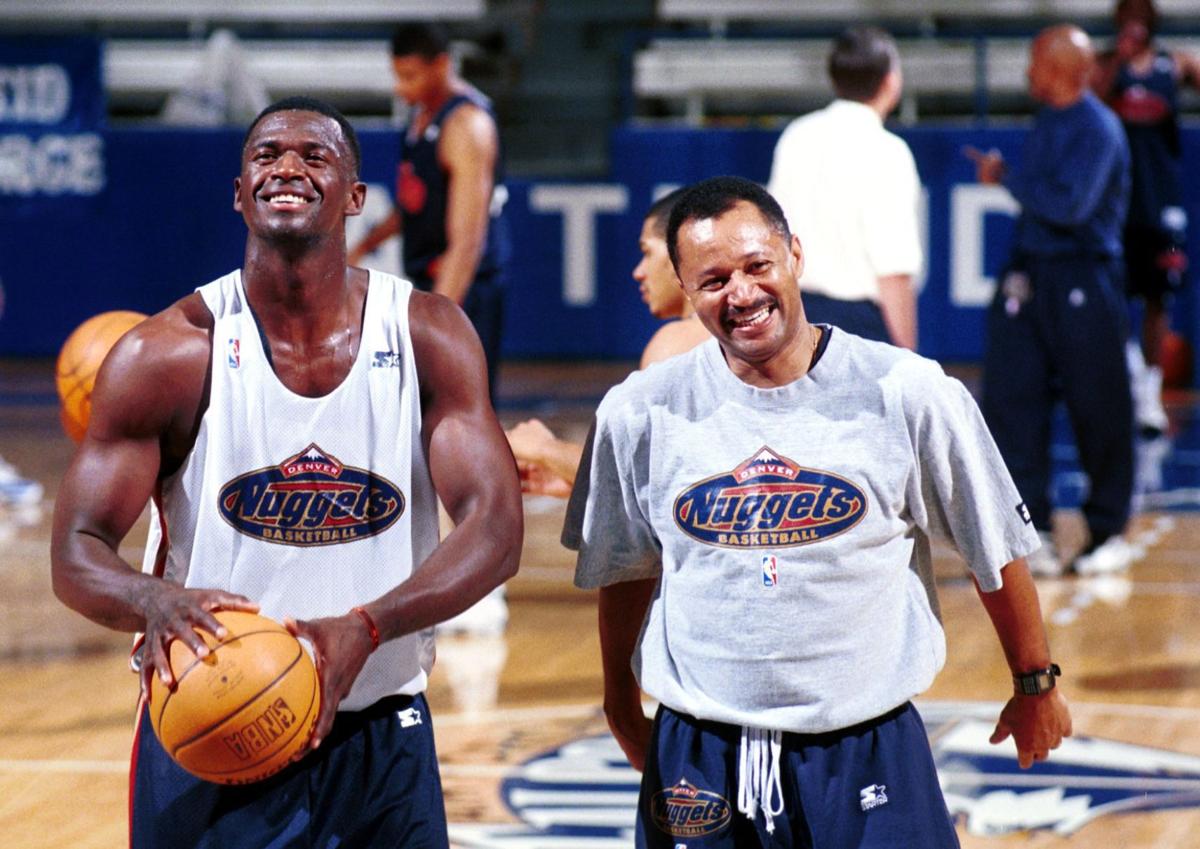 While practicing with the Denver Nuggets Sunday, January 24, 1999, during the morning at the United States Air Force Academy, Antonio McDyess cuts up with asst. coach Mike Evans during free throw practice. McDyess has been smiling since signing a six-year, $67.5 contract to rejoin the Nuggets after spending one season with the Phoenix Suns. (AP Photo/Colorado Springs Gazette/Jerilee Bennett) 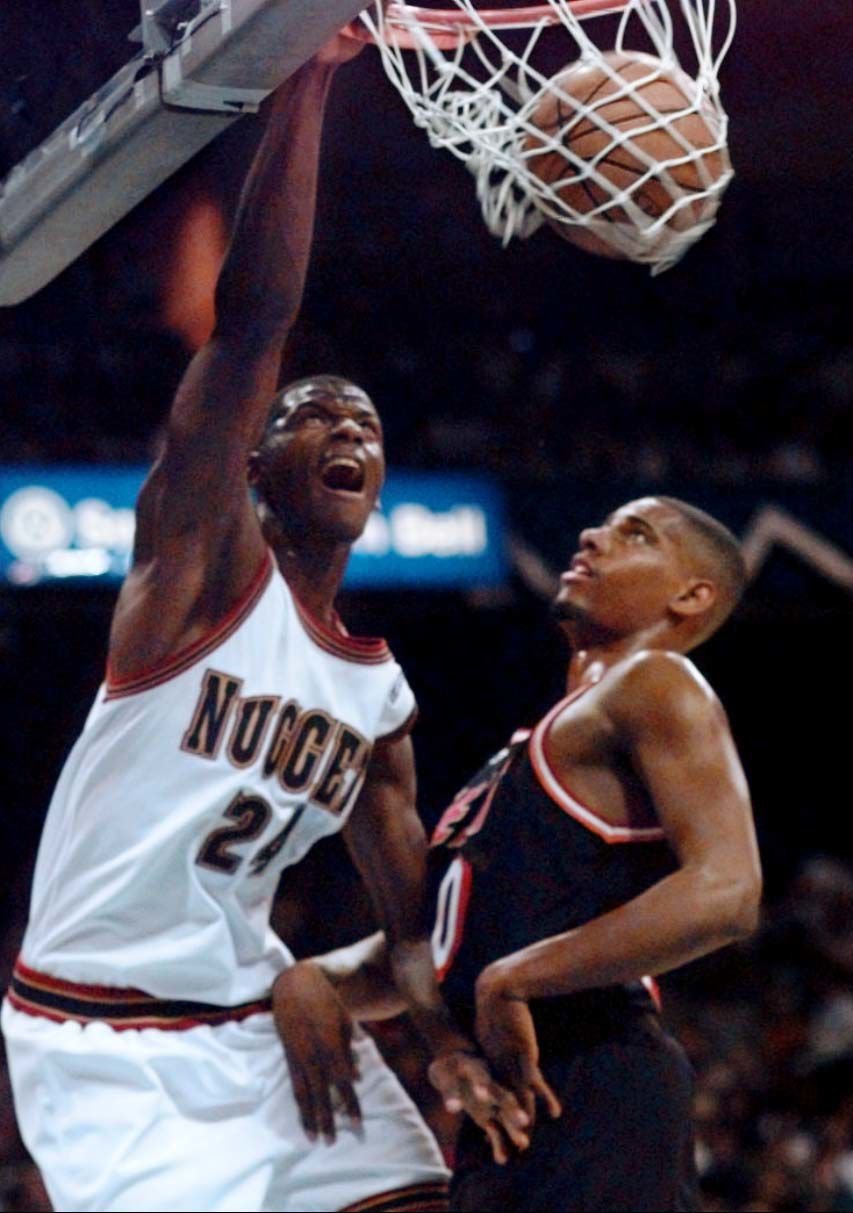 While practicing with the Denver Nuggets Sunday, January 24, 1999, during the morning at the United States Air Force Academy, Antonio McDyess cuts up with asst. coach Mike Evans during free throw practice. McDyess has been smiling since signing a six-year, $67.5 contract to rejoin the Nuggets after spending one season with the Phoenix Suns. (AP Photo/Colorado Springs Gazette/Jerilee Bennett)

DENVER — Tim Connelly was there for it.

"I'll never forget it. He was unreal," said Connelly, the Nuggets president of basketball operations, reflecting on those memorable NCAA Tournament games in his hometown.

With twin games that altered the course of the Nuggets franchise — long before Connelly ran the team — McDyess embodied the "postseason bump," as Connelly called it. While the Alabama forward entered the NCAA Tournament “little recognized, hardly heralded,” in the words of the Chicago Tribune, McDyess left it in a ferocious rise to the top of the NBA draft: 39 points and 19 rebounds in one game, 22 and 17 in another.

“So explosive, so athletic. Just a 6-9 jumping jack. So much quicker to the ball than everybody else,” Connelly said. “A grown man.”

“It’s fair to say that tournament, those games, changed his outlook,” he said.

March Madness is one stage where NBA stars are born.

Ever since the coronavirus pandemic took our ball and went home, NBA teams had to shift their approach to the draft. No postseason means no postseason bump, a kind of rise that nudged the likes of Steph Curry, C.J. McCollum and, of course, McDyess, into the draft lottery.

The Nuggets own the No. 21 pick in this draft. They classify a string of events under the “postseason” banner — the NCAA Tournament (canceled), Portsmouth Invitational (canceled) and draft combine (likely canceled) among them. How could a limited cache of intel — relative to the norm, at least — affect their draft?

Jim Clibanoff, the team’s director of scouting, told The Gazette: "I love that McDyess example. I was just referencing that (case) a few days ago. That’s a situation you don’t always see, but that was a big one, absolutely.”

“His sophomore year at 'Bama, people (in the league) knew about him. But when he did that it did give you that glimpse of what he could be. I think sometimes it’s overrated when you say, ‘I want to see what a guy does on the big stage.’ But it does allow us, as evaluators, an additional two or three games to study them in real time.”

Truth is, a rookie's going to have a tough time breaking into the Nuggets' established rotation. Denver is the rare team that needs to get older before it gets younger. They're also a team that has found wild success building through the draft, an outlier in a field of contenders that’s largely comprised of destination franchises like Los Angeles, Houston and the Warriors of the Bay Area. The draft is their wheelhouse — college postseason or no college postseason.

“We’re in a great spot whenever we get the word that this is going to happen,” Connelly said. “(We’ve) got a great routine, smart people. I love where we’re at.”

The draft was scheduled for June 25. That’s off the table, of course. The New York Post reported Monday a possible draft day in late August or early September. Either way, it's another positive sign sports are on their way back — not a moment too soon — with fingers crossed the league can finish its 2019-20 season.

“Most importantly (right now),” Clibanoff said, “we'd be in the playoffs.”

Among the prospects projected to land around the 21st pick, I lean toward Gonzaga problem-solver Killian Tillie, Arizona big man Zeke Nnaji or Florida State wing Devin Vassell. You know, just in case the Nuggets are reading this.

If NBA teams whiff on this draft, it won’t be for a lack of intel. With no postseason of their own, front offices have exhausted their film work on draft prospects. They’ve exhausted background calls to high school and college coaches, family members, even guidance counselors.

While the spring is usually reserved for scouting the Nike Hoops Summit, Jordan Brand game or McDonald’s All-American game, it’s now a list of Zoom interviews with prospects. As one non-Nuggets source put it, "(The Zoom calls) are to make sure he’s not crazy, more or less."

The postseason bump for McDyess carried him all the way up to No. 2 in the draft, where the Clippers took him before promptly trading him to the Nuggets. Those blasted injuries turned a Hall of Fame-level athlete into a classic tale of what-could-have-been. Would there have been another fantastic rise in the 2020 postseason?

Fresno State, San Diego State and San Jose State are among the California schools that will go with online classes this fall, throwing the sports season into question.