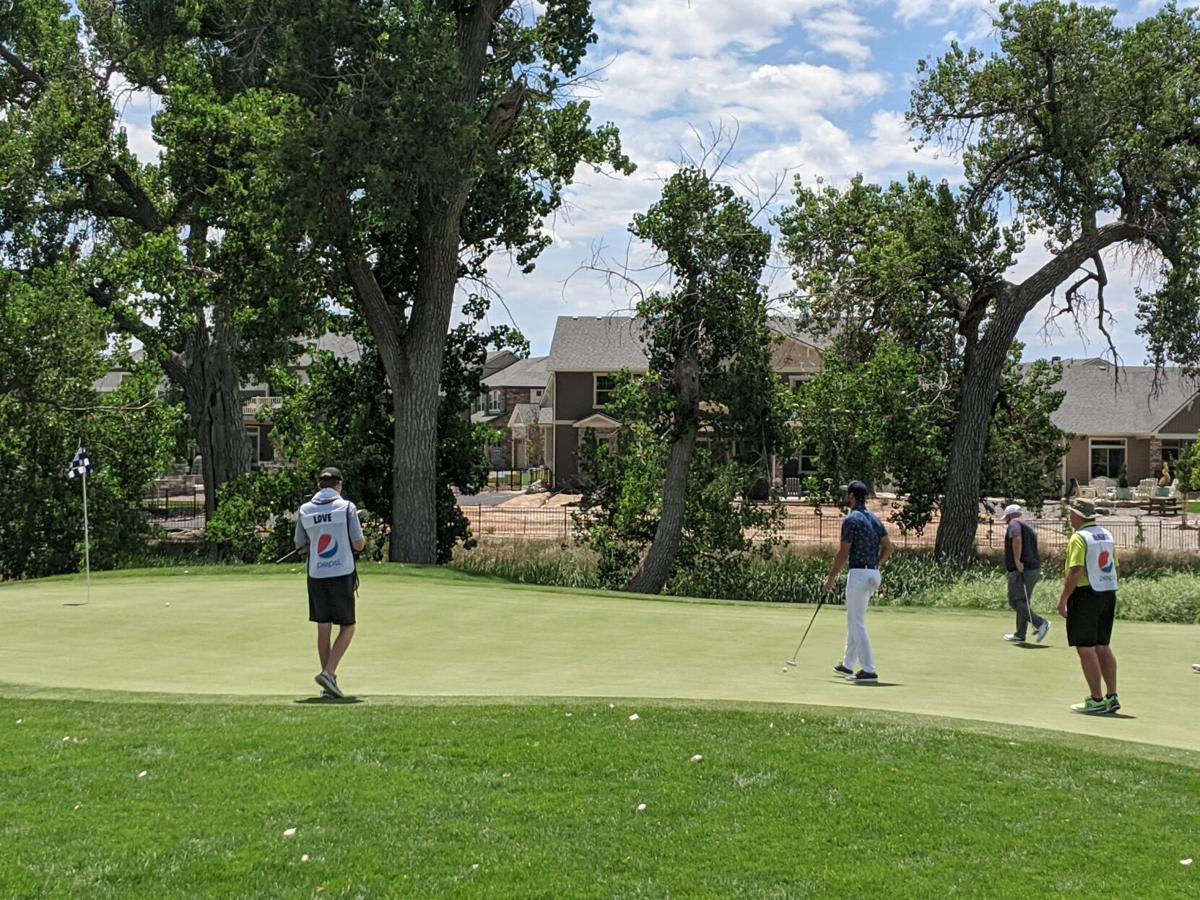 Broncos kicker Brandon McManus, blue shirt, lines up a putt on No. 2 at Green Valley Ranch Golf Club in the first round of the COBank Colorado Open on Thursday. McManus is playing as an amateur. 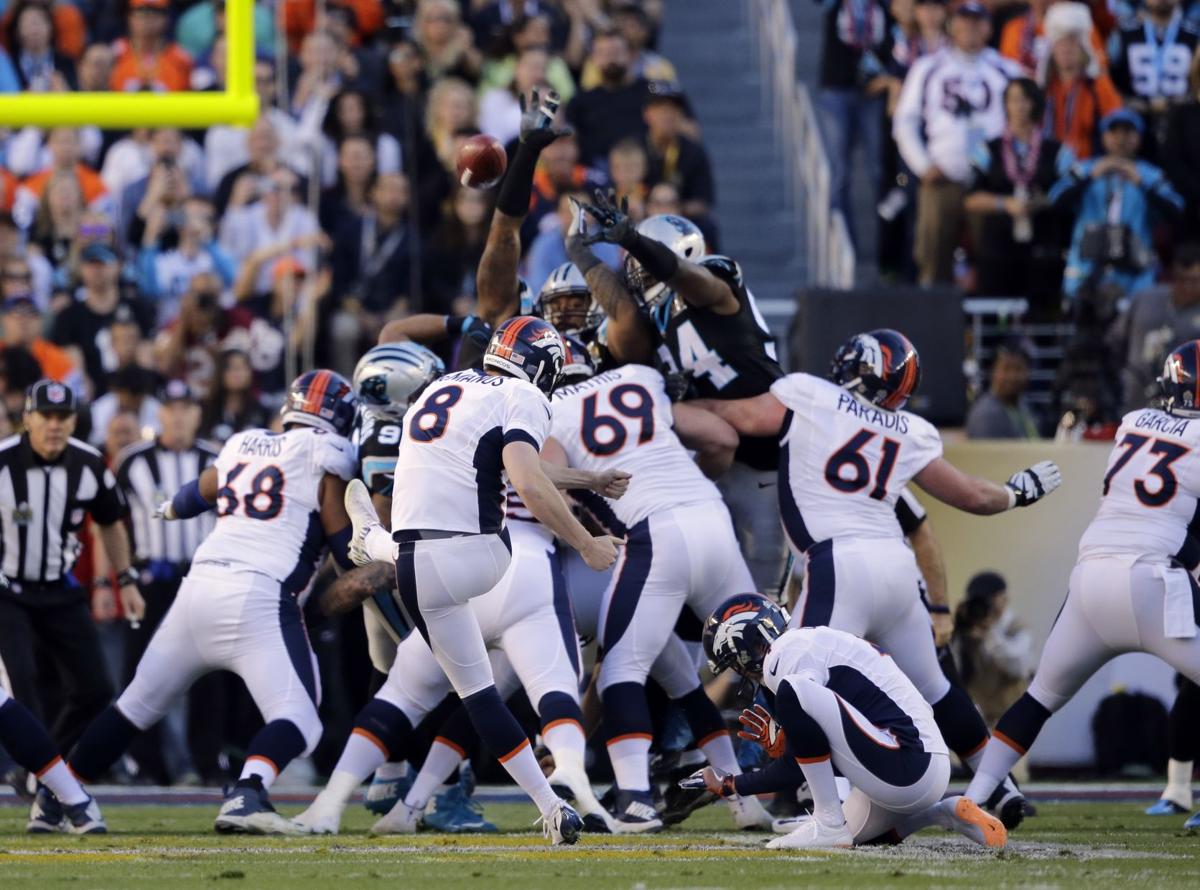 Broncos kicker Brandon McManus, blue shirt, lines up a putt on No. 2 at Green Valley Ranch Golf Club in the first round of the COBank Colorado Open on Thursday. McManus is playing as an amateur.

A Super Bowl champion agrees with you.

“This (golf) is the hardest sport in the world,” Broncos kicker Brandon McManus said Thursday as he prepared to tee off in the COBank Colorado Open at Green Valley Ranch Golf Club.

Rule No. 1 on the golf course: Never gamble against a stranger with a good tan — or an NFL kicker with time on his hands. It was on the eighth green in the first round that McManus showed why a short memory is critical both as a football player or a golfer who carries a 2.1 handicap.

After a trio of three-putts dogged his front 9, he stuck an approach shot to 15 feet. His father and caddie, Dennis, gave the green a good read before B-Mac buried a slippery, downhill birdie putt.

“It’s the most notable field in Colorado Open history,” said Kevin Laura, CEO of the Colorado Open Foundation and a Colorado Springs native.

And there was McManus, who can flat-out play. Consistent, compact swing. Easy draw on his irons. Long enough off the tee that he kept pace with playing partner Davis “Dru” Love, who won the Colorado Open in 2018 and hits a lot of wedges. About all that stands between McManus and a scratch handicap is a confident putting stroke.

Having caddied for Masters champion Zach Johnson at Augusta National, McManus said: “Zach tells me that putting’s the key for me all the time. I have to avoid three-putts. If I’m hitting greens and fairways, I have to make those putts count. Three-putts are just not good for your morale. They're demoralizing.”

Speaking of America’s morale, this juicy nugget from the Broncos’ NFLPA rep should brighten everyone's day: "I expect that we’re going to start (the regular season) on time.”

What transpires between now and Broncos-Titans on Sept. 14 remains uncertain. Preseason games "won't happen," McManus said. Will the quality of football suffer without exhibitions?

“As an undrafted free agent myself, it’s obviously difficult to see that. That (preseason) game film is huge for the guys who are trying to make it undrafted,” he said. “That’s tough to see.”

As for the regular season, “With no preseason games I don’t think the play itself will be that different. We’ve been going away from starters playing in the preseason, anyway. So I don’t think it will look that much different, really.”

The back-and-forth between the NFL and the players union has “pretty much finalized the health and safety aspect” and is focused on financials, McManus said. Should football fans expect to see the usual 16-game season?

“I definitely hope it’s 16 games. That’s the big question everyone’s trying to figure out the answer to: what constitutes a full season? Is it one game? Is it six games?” McManus said. “That’s what we’re trying to figure out, the happy medium. As a football fan growing up, obviously I’d like to have 16 games.”

Good news: the Broncos already beat the Chiefs. Last week in a celebrity tournament at Lake Tahoe, McManus finished 37th — ahead of Kansas City’s Patrick Mahomes (38th) and Travis Kelce (58th). Bad news: a man who considers golf to be his second-best sport is playing as an amateur in one of the toughest fields the Colorado Open has ever seen. McManus struck the ball well, putted like golf is not his day job and fired a 10-over 82. No shame in shooting 82 on this track, though he will need to ring up good buddy Peyton Manning for a comeback pep talk.

“Making the cut in a field like this would be a really big deal,” McManus said before the round.

South Carolina’s Corbin Mills shot 62 to sit atop the leaderboard. Seven players fired 65 or better, including Colorado Springs' Prater at 65. Kupcho’s in solid position to make the cut after a 2-under 70. The course measured 7,309 yards from the tips. Did I mention she hits bombs?

"I always say I'd much rather have a 55-yard field goal than a 4-footer," McManus said.