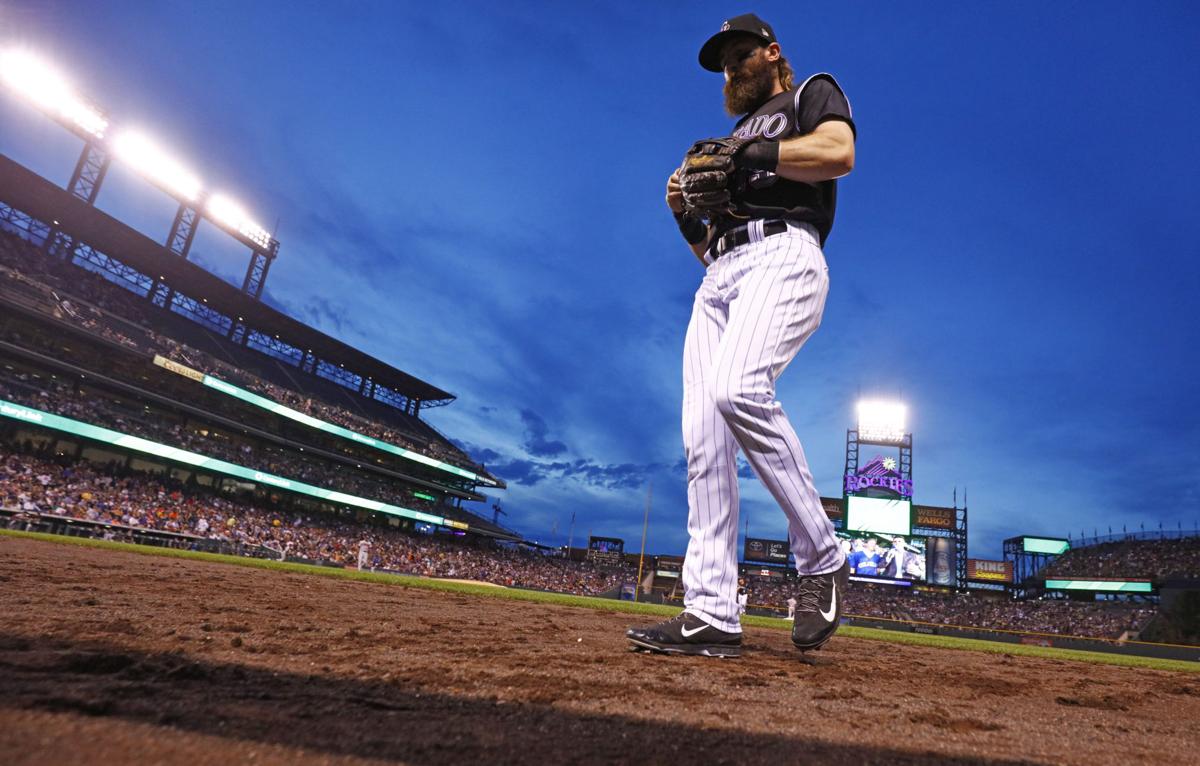 Colorado Rockies center fielder Charlie Blackmon walks to the dugout against the Atlanta Braves during the fifth inning of a baseball game Monday, Aug. 14, 2017, in Denver. (AP Photo/Jack Dempsey) 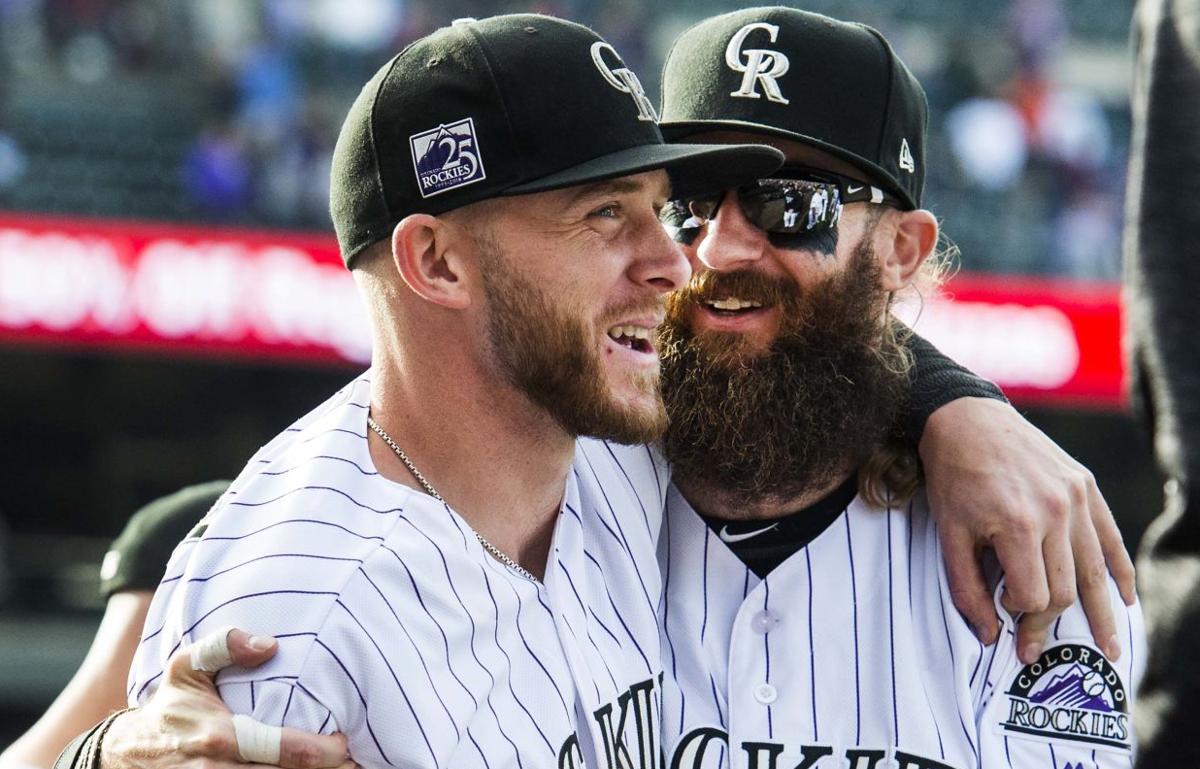 Rockies shortstop Trevor Story, left, and centerfielder Charlie Blackmon celebrate after a 12-0 win over the Nationals on Sunday at Coors Field in Denver. Blackmon finished his first career cycle with a double in the eighth. He tripled in the first, homered in the third, singled in the fifth and struck out in the sixth. Story, C3

Colorado Rockies center fielder Charlie Blackmon walks to the dugout against the Atlanta Braves during the fifth inning of a baseball game Monday, Aug. 14, 2017, in Denver. (AP Photo/Jack Dempsey)

Rockies shortstop Trevor Story, left, and centerfielder Charlie Blackmon celebrate after a 12-0 win over the Nationals on Sunday at Coors Field in Denver. Blackmon finished his first career cycle with a double in the eighth. He tripled in the first, homered in the third, singled in the fifth and struck out in the sixth. Story, C3

“Never,” the All-Star outfielder responded, straight to the point, when asked if he ever considered opting out of the Major League Baseball season after he tested positive for COVID-19 back in June.

This will come as awful news to the doomsday corner of our population: Baseball's back, baby.

The Rockies meet the Texas Rangers at brand-new Globe Life Field on Friday — Re-Opening Day. Holler it from the Wrigley Field rooftops, one of the few places you can still watch a ballgame: Play ball!

During a 60-game season, the shortest MLB season since 1878, there will be issues along the way. It won’t be perfect. There will be positive tests along the way. No doubt about it. To prepare for the inevitable gasps when the next Major League Baseball star tests positive for the coronavirus, let's check in with one who actually contracted the virus.

Nothing wrong with a little firsthand perspective, right? Take it away, Chuck.

“My symptoms were what I would consider mild flu symptoms. I had a headache, which was the most prominent thing that I felt. I had a bit of a cough. Then I had some body aches. I just felt sick,” said Blackmon. “It only lasted for about 36 hours. I would consider it mild compared to the flu. I had the flu proper a couple years ago, and I thought that thing was going to wipe me out. I’m lucky that my COVID experience was not nearly as severe, and I know it does affect everybody a little bit differently. But I would consider the symptoms that I felt to be minor.”

Blackmon made sure to emphasize, multiple times, not all recoveries are made the same.

“I felt sick. It was nothing compared to me having the flu,” Blackmon said. “Looking back on it, I wish I had gotten this months ago and felt crappy for a day and a half and then got on with it and lived the rest of my life and not have tried to avoid it by canceling everything in the country. At the same time, that’s only based on my experience. It can be much more serious for everyone else.”

Colorado is 3 for 3 on sports stars who contracted the coronavirus and lived to hold a press conference about it. Nuggets star Nikola Jokic got the virus back in Serbia and described his two-week quarantine as “like a vacation." Jokic played in a Nuggets scrimmage Wednesday and looked fantastic in his new slimmed-down beach body. Broncos star Von Miller, who has asthma and contracted the virus in the spring, resembles a Marvel superhero these days. Have you seen Von’s social media accounts lately? Dude looks like a tank.

Then there’s the 34-year-old Blackmon, whose perspective on the pandemic should be applied to all walks of life: protect the vulnerable while the rest of America goes back to work, school and living life. With daily or weekly testing and safety protocols out the wazoo, the safest gig in the world these days is that of a professional athlete. Just this week the NBA (zero positive tests among 346 players), NHL (two positives after 2,618 tests) and MLS (zero positives after 1,106 tests) revealed over 4,000 coronavirus tests resulted in ... two positives. Two. Toss in the exhaustive protocols for college athletes — not to mention the exceedingly low risk to college-aged people — and it’s past time to drop the puck, tip the ball and throw out the first pitch.

Ask Chuck. He would know. He actually had it.

“I’m lucky that it didn’t affect me that bad. But if I were to just explain this experience in terms of the setbacks I’ve had in my life this is a minor, minor glitch, a minor speed bump. It’s not something that’s going to throw me off,” Blackmon said. “It’s not something that I was scared of or that I’ll be scared of for any of the guys in this locker room. I do think we’ll be as safe as we can and try not to get it.

Starting the truncated season Friday in Texas and ending abruptly Sept. 27 in Arizona, the Colorado Rockies will be fortuitous if they’re not the worst team in the National League West.