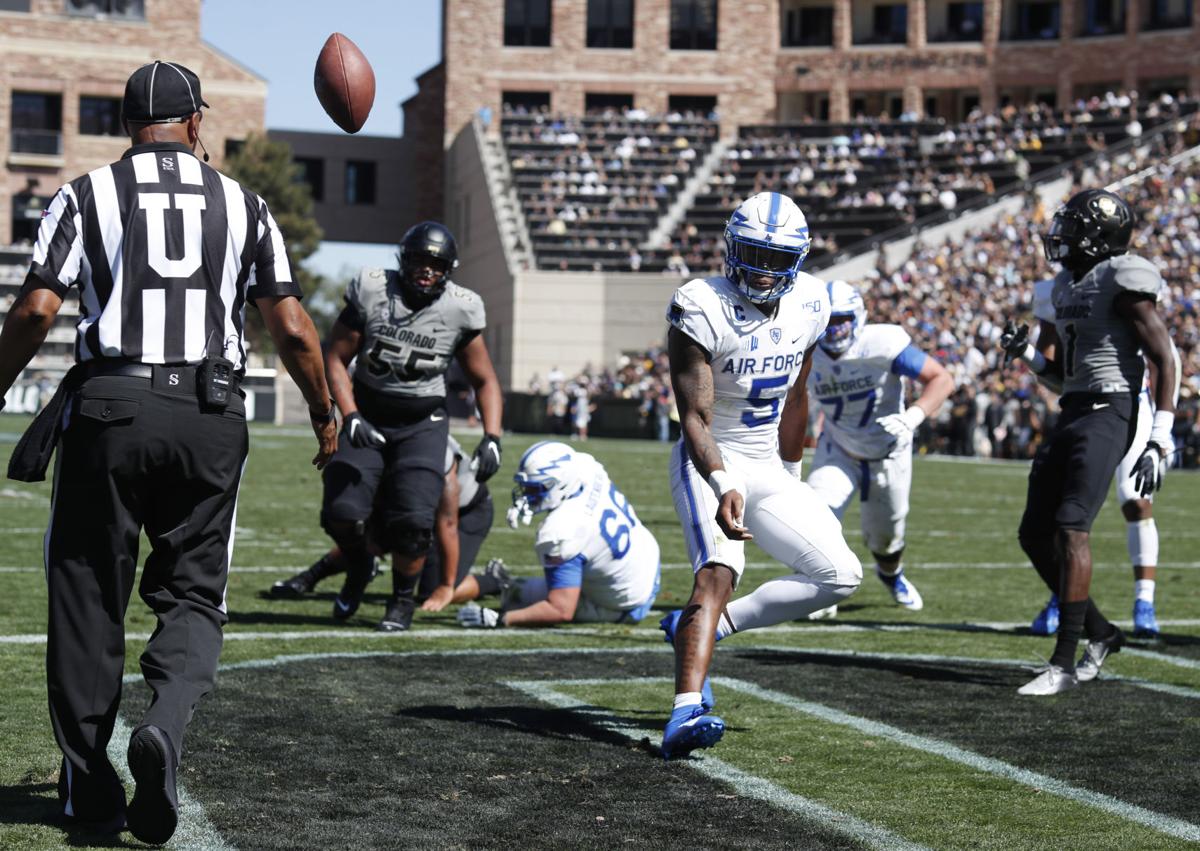 Air Force quarterback Donald Hammond III flips the ball to umpire Michael Cooper after rushing for a touchdown against Colorado in the first half of an NCAA college football game Saturday, Sept. 14, 2019, in Boulder, Colo. (AP Photo/David Zalubowski) 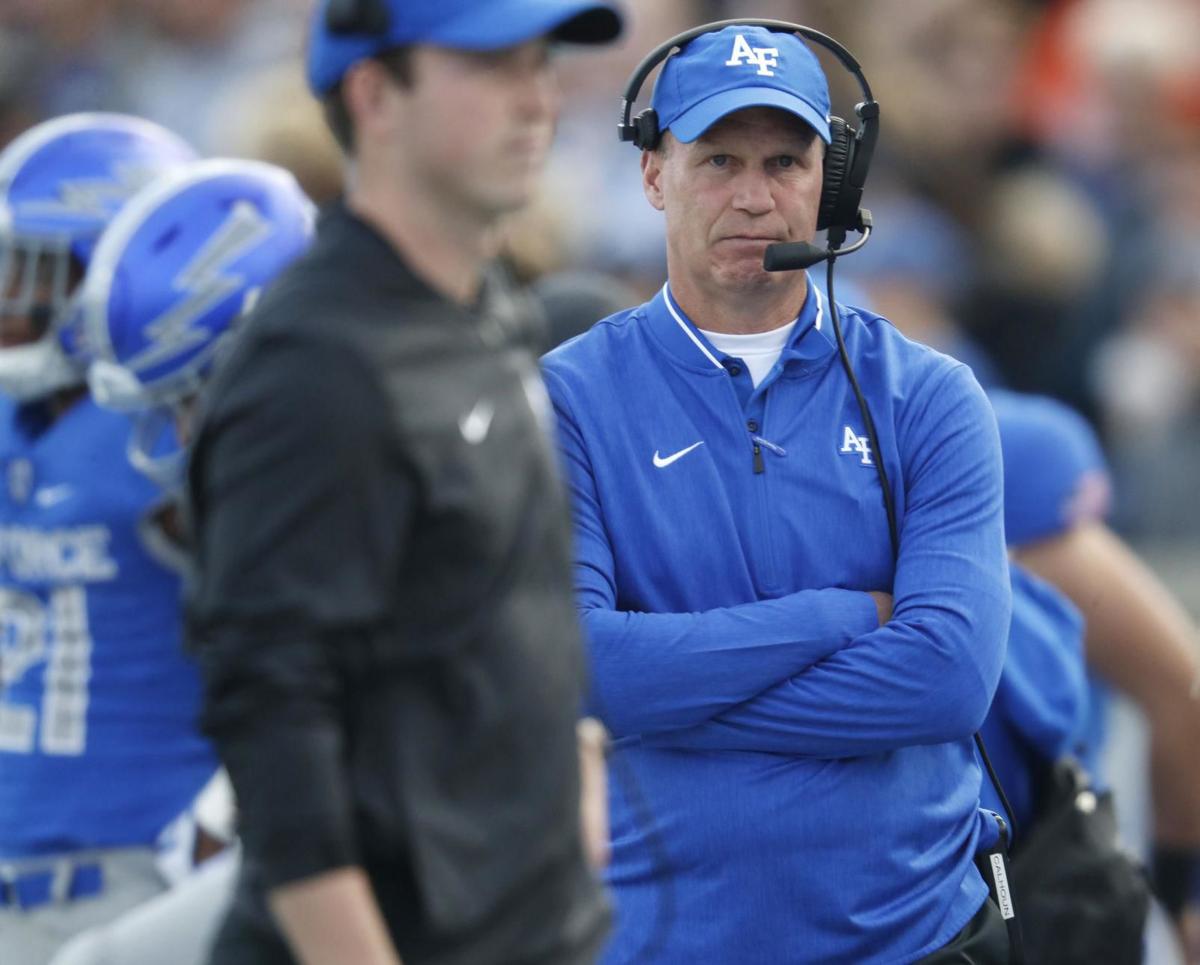 Air Force quarterback Donald Hammond III flips the ball to umpire Michael Cooper after rushing for a touchdown against Colorado in the first half of an NCAA college football game Saturday, Sept. 14, 2019, in Boulder, Colo. (AP Photo/David Zalubowski)

It's a half-hour till the sun slips over Pikes Peak and the Air Force practice fields light up like a coloring book. Here comes more good news for the 2-0 Falcons, fresh off beating the tails off the CU Buffs:

My favorite player in college football, majoring in aeronautical engineering, honored as he should be. Boy, did “DJ” deserve it too: three total touchdowns, first win over CU-Boulder in a half-century, swag for days. I couldn’t wait to share with you guys what Hammond had to say about the CU win and the award — and his plans for the biggie at No. 20 Boise State on Friday.

Nope. Not happenin'. Hammond, the rare junior elected a team captain, was off-limits to media.

Bummer, but no big deal. This Air Force squad isn’t just 2-0 and looking like a conference title contender. It’s stuffed with personalities as easy to root for as birthday cake. Kade Remsberg, author of the game-winning touchdown at CU? Off-limits, too. Tre Bugg, with the key interception of the Buffaloes? Off-limits, too.

Hmmm. Weird deal. Isn’t this the perfect time to spread Air Force love all over the Pikes Peak region, and up to the Denver market that’s forgotten Air Force exists? The Falcons' junior class — the gifted, spirited core of this program resurgence — has been disallowed from speaking to media until further notice, the same week as a juicy ESPN2 game at Boise State.

“We usually do (it) somewhere around September,” Troy Calhoun told me in explaining his thought process on the adjusted media policy. “They get into a pretty good full swing academically. Just trying to make sure those guys are ready to go for all their mid-terms.”

School-first. I can dig that. But right now?

The best FBS program in Colorado needs all the help it can get drawing fans to games at Falcon Stadium. Win or lose at Boise State — I think they win, by the way, even as eight-point 'dogs — they’ll be lucky to see 25,000 fans at the next home game, Sept. 27 vs. San Jose State, a high school football Friday.

That's a shame, too. This Air Force team is talented enough, motivated enough, coached well enough, to flirt with double-digit wins and the kind of bowl game they haven’t seen since the 1998 Oahu Bowl against Washington. And they’ve had some really good teams since then.

This isn’t whining for better access. Lord knows there’s more than enough whining in this media climate, and I can’t blame those of you who distrust the propaganda that’s labeled as news.

This isn’t about that. This is about reminding football fans there’s no better program around these hills than Air Force, there’s no better place to experience a game than the academy, and hamstringing a beat writer as superb as The Gazette's Brent Briggeman is counterproductive.

I would say these are the caliber of men one day I'd want to hire. Problem is, I’ll probably be working for them. When your cadet-athletes are this impressive, why not promote your guys?

“We have a lot of confidence in our abilities, but it’s also because of the way we dissect film and prepare for the opponent,” said senior Jeremy Fejedelem, who joined Hammond on the honor roll after being named Mountain West defensive player of the week Monday. "And we practice harder than any team in the country.”

Maybe that’s it. Maybe this team’s brash confidence flies in the face of Calhoun’s stern belief in humility. Nope. That’s not it, Calhoun said. His reasons are purely academics, he said.

Anyway, that CU game. How fun was that?

So let’s talk to the offensive line, the engine that runs this ship. Up in Boulder the studs up front played four quarters — plus one play in overtime — with only one holding penalty. Someone alert the Broncos, who can only dream of such a performance. Parker Ferguson? Nolan Laufenberg? Kyle Krepsz? Scott Hattok?

From politics to football, Air Force beats CU Buffs in a win for the ages | Paul Klee

The political undertones of Air Force's big win at CU-Boulder can't be ignored. After 45 years, this one's going to feel good for all academy alums, Paul Klee writes.