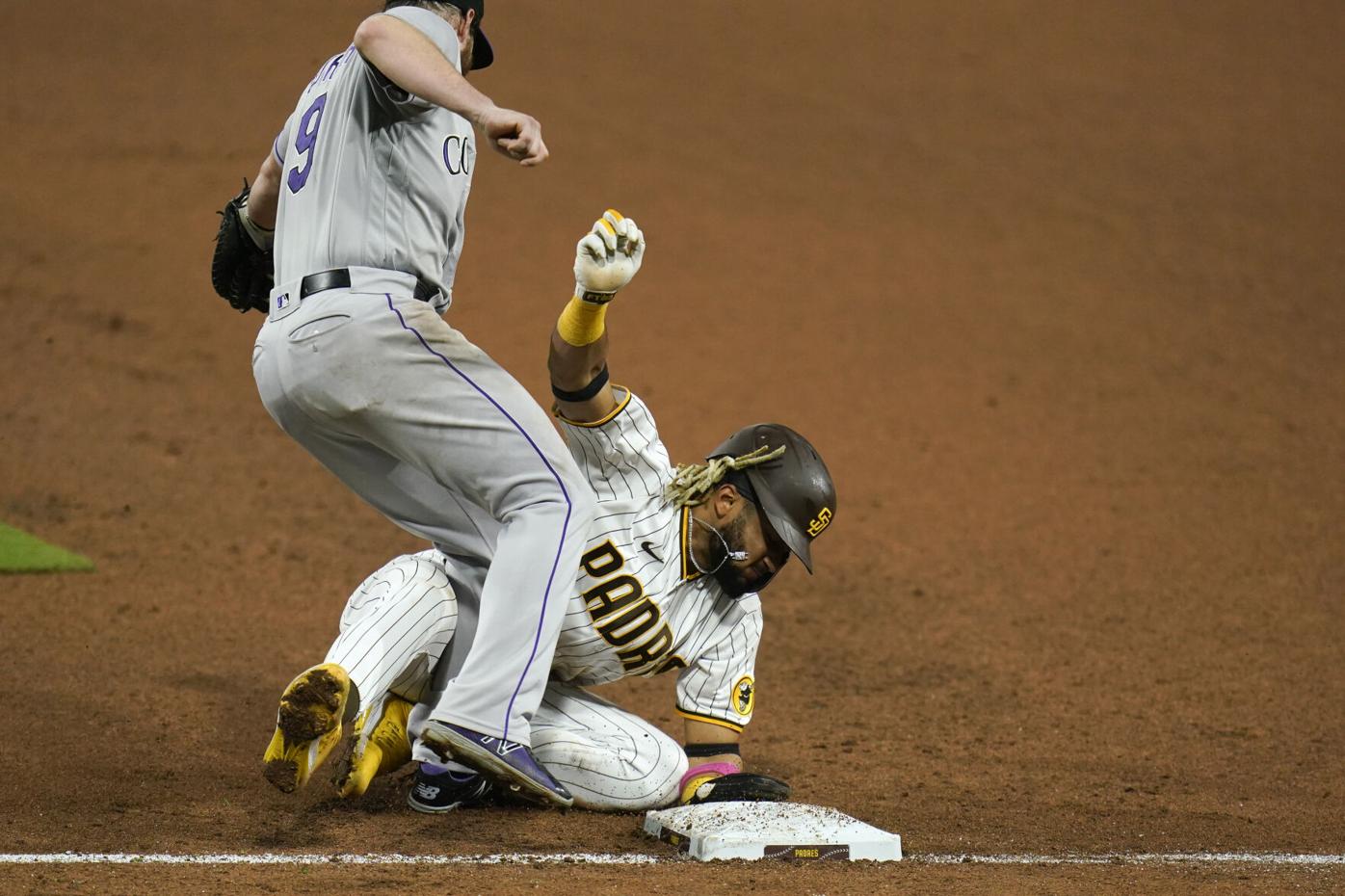 San Diego Padres' Fernando Tatis Jr., below, collides with Colorado Rockies first baseman Daniel Murphy while unable to get back to first on a line-out by Manny Machado during the seventh inning of a baseball game Monday, Sept. 7, 2020, in San Diego. (AP Photo/Gregory Bull) 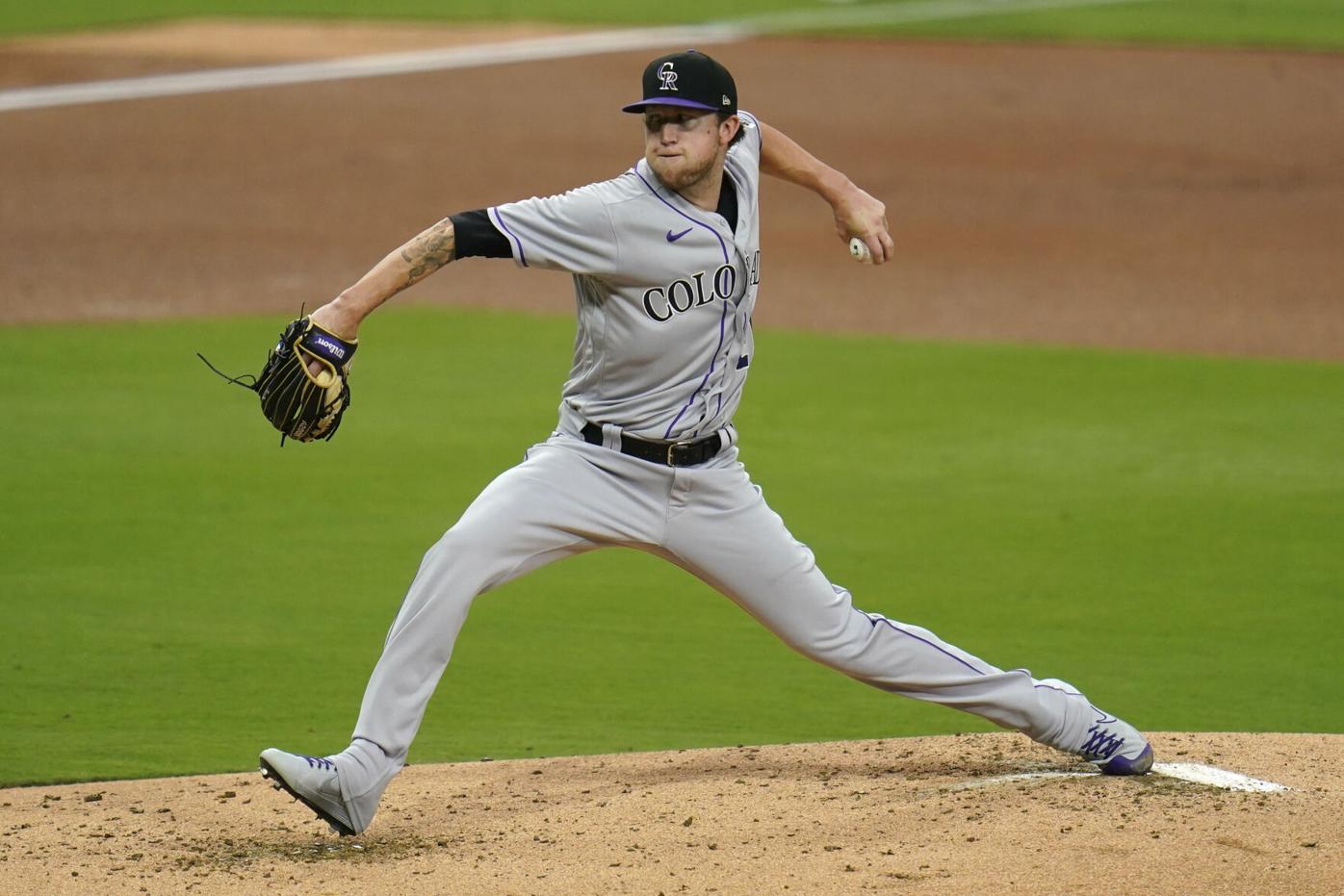 San Diego Padres' Fernando Tatis Jr., below, collides with Colorado Rockies first baseman Daniel Murphy while unable to get back to first on a line-out by Manny Machado during the seventh inning of a baseball game Monday, Sept. 7, 2020, in San Diego. (AP Photo/Gregory Bull)

It took until the bottom of the ninth for a team to string together consecutive hits, and that’s all the Padres needed to eke by the Rockies.

Jurickson Profar’s double off Carlos Estevez followed a Greg Garcia single and scored the lone run in San Diego’s 1-0 walk-off win in the opener of a three-game series in San Diego.

The loss drops the Rockies (20-21) into fourth place in the NL West and knocks them half a game out of a playoff spot with 19 games remaining.

"You've got to pitch to win," Rockies manager Bud Black said Monday. "There are going to be nights like tonight when you get shut down by good pitching."

Colorado didn’t have many scoring opportunities in this duel. It had two on in the third, but the Padres escaped with a double play. Trevor Story had a one-out double in the sixth, but Charlie Blackmon struck out behind him. Story also led off the ninth with a single, but Blackmon, Nolan Arenado and Kevin Pillar couldn’t find the go-ahead hit.

"We have a lot of fight," Story said. "That's what I like about our offense and our team in general."

Kyle Freeland continued to thrive on the road this season for the Rockies. The left-handed Denver native struck out six and gave up just three hits (all singles) in six scoreless innings. He walked three. Freeland’s road ERA is down to 2.63 through four starts away from Coors Field.

This start followed an abbreviated appearance in Freeland’s last outing, as Black pulled him after two innings when he piled up 61 pitches. Black’s caution wasn’t penalized in that game, as the Rockies came back from five runs down to win, and the desired effect of keeping Freeland sharp was clearly accomplished as he tied a season-high in strikeouts and didn’t allow an extra-base hit against baseball’s highest-scoring team.

Estevez (1-2) took the loss, giving up one run and two hits without recording an out.

"These kind of games are a lot of fun as a pitcher," Freeland said of his duel with Padres starter Dinelson Lamet. "You put up a zero, then you kind of say, 'Your turn.'"

Lamet took his scoreless outing 7 2/3 innings and matched a season-high with 11 strikeouts.

"It’s just so hard to lay off that slider," Black said. "Out of his hand it looks like a strike; it looks like a fastball. All of the sudden it gets to the plate and it disappears."

Rockies rally in the ninth for rare victory over L.A. at Dodgers Stadium

Looking for an opposite result, the Rockies looked to the opposite field.