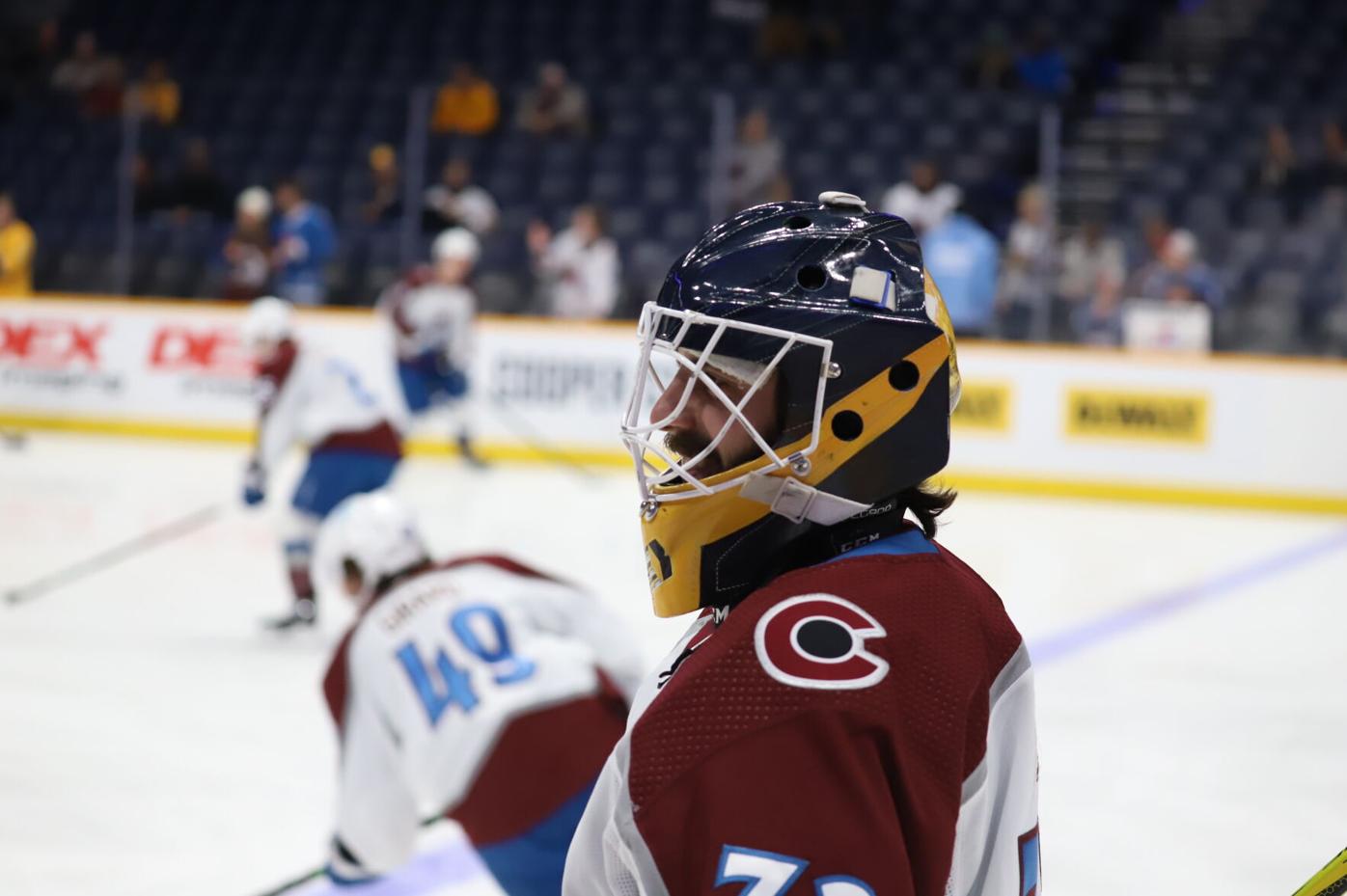 Dustin Smith, 33, smiles during warmups with the Colorado Avalanche on Dec. 16, 2021. Smith is an emergency backup goaltender for the Nashville Predators and backed up Pavel Francouz. 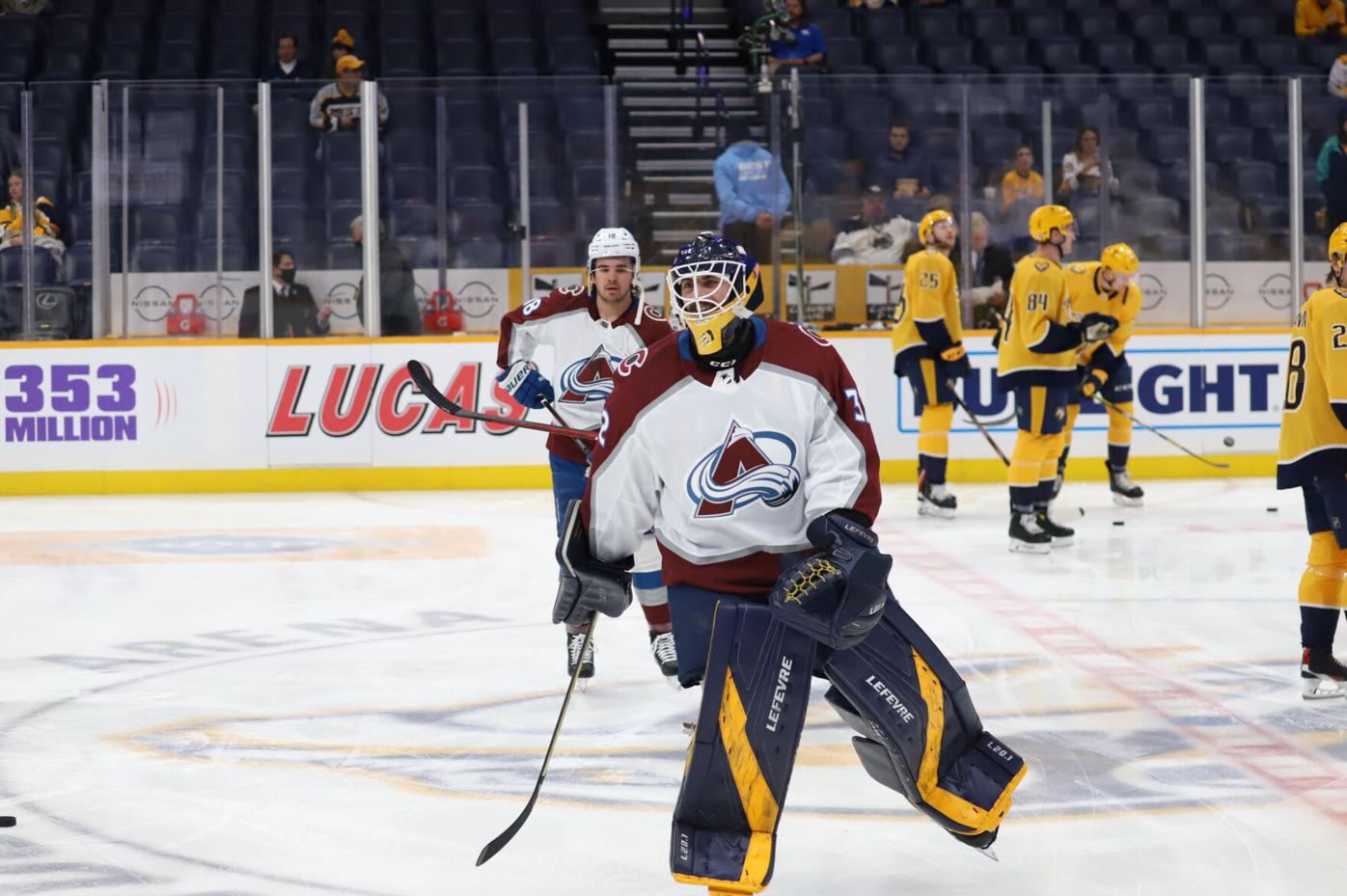 Dustin Smith, 33, takes a lap during warmups with the Colorado Avalanche on Dec. 16, 2021. Smith is an emergency backup goaltender for the Nashville Predators and backed up Pavel Francouz. Colorado forward Alex Newhook follows behind him. 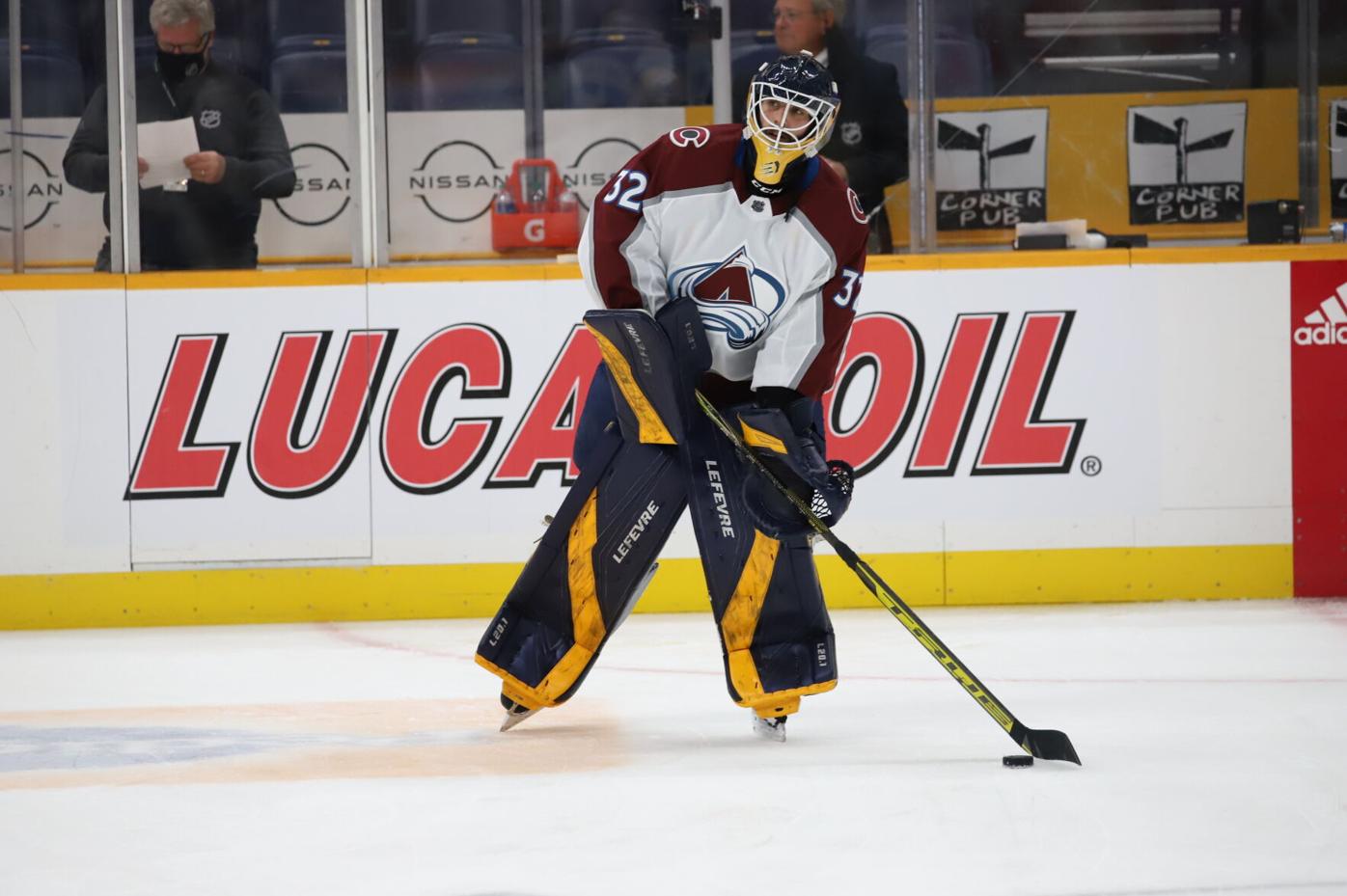 Dustin Smith, 33, has the puck on his stick during warmups with the Colorado Avalanche on Dec. 16, 2021. Smith is an emergency backup goaltender for the Nashville Predators and backed up Pavel Francouz.

The “Emergency Boys” were stoked. One of their own had had made it back to the big show.

Should one or both NHL goaltenders be unable to continue with a game, the home team has a designated EBUG — emergency backup goalie — in attendance. The EBUG, a uniquely NHL quirk, has to be ready to go in for either team.

Often times, this isn’t even a minor-league-caliber goalie. It’s someone with a normal job, two mishaps away from living the everyman sports fan’s dream.

Two of the more famous examples are Scott Foster, an accountant who played for the Chicago Blackhawks on an emergency basis in 2018. About two years later, 42-year-old building operator — though “Zamboni driver” was catchier — David Ayres came in after both Carolina Hurricanes goaltenders were injured before the third period in Toronto. He became the first EBUG to record a win and the oldest NHL goalie to make his regular-season debut. Ayres soon found himself delivering the monologue for an “injured” Stephen Colbert on "The Late Show."

Nashville EBUG Dustin “Bones” Smith was watching Ayres on his phone during a Predators game.

The closest Smith had gotten to NHL game action was Jan. 12, 2017, when a slap shot hit Boston Bruins goaltender Tuukka Rask near his throat. Smith got a text during intermission that he needed to come downstairs and get dressed — no joke this time. Smith watched the rest of the game from the locker room.

Smith — and Ayres too, he said — are members of an Instagram group chat called the “Emergency Boys.” NHL EBUGs compare notes and keep tabs on each other. New members are either invited or find their way in.

“Any time anything happens, we all hit the group like, ‘Aw that’s so awesome, congrats, have fun,’” Smith said.

The Southwest Airlines employee and occasional Predators practice goalie got his own congratulations last weekend. For the second time in nine games, the visiting Colorado Avalanche needed an EBUG after starter Darcy Kuemper was ruled out day-of. Smith was more than happy to trade a relaxed night in the stands for warmup laps with Nathan MacKinnon and Mikko Rantanen.

The threat of getting called in wasn’t actually threatening, he said.

“You don’t wish for anybody to get hurt, but I was excited for an opportunity to play,” Smith said. “Even throughout the game, I’m like, ‘I don’t want anything bad to happen to (Avalanche goalie Pavel Francouz),' because even just meeting him, how nice he is, you can’t wish harm on a guy like that. Or anybody, for that matter.

“But the whole time I’m like, ‘I want to play.’ I’m so excited to get in and play. Being in that moment and having that perspective of the game, it was like, I got this. It was like — put me in. Let me get in there and stop some pucks.”

“Really not too much to brag about, but kinda funny how things work out,” Smith said.

His other job is on the tarmac, “marshalling planes and dragging bags around.” He can double up shifts and tailor them around his hockey schedule. People don’t always understand when he explains his other gig.

As a homegrown Nashville hockey player, he knows people. One of them is Tim McAllister, a friend and teammate who works with some of the Predators during the summer.

Smith started moonlighting — or, rather, daylighting — with the Predators in the summer of 2012. Smith reached out and let McAllister know he was available in the mornings. He was invited out to a training session and expected a handful of NHL regulars. The entire room was packed.

His college club team nickname was “Bones” because he was always the skinny kid growing up. It was on the back of his helmet and the Predators ran with it.

“The whole time, they didn’t make me feel out of place,” Smith said.

The Predators impatiently waited for the end of the lockout that pushed the season’s start to Jan. 19 and reduced it to 48 games. Week followed week with no new news. Smith, meanwhile, was having a grand old time.

“Every week it was like another like, ‘Aw, that’s a bummer.’ Meanwhile I’m cheesing from ear to ear,” Smith said.

Smith is on two men’s league teams and takes part in a weekly Predators alumni skate. Virtual reality goalie training has become a pregame warmup ritual for recreational and Predators games alike to get into the right mindset. He’d just removed his headset Thursday when he saw a text from Ben Vanderklok, Nashville’s goaltending coach: “Have fun tonight.”

“He's never said that before a game,” Smith said.

Then he noticed an email from the Avalanche telling him to call assistant general manager Chris MacFarland. Named starter Kuemper had entered COVID-19 protocol less than two hours before game time. Smith was getting another chance at NHL action.

“It was kind of like an immediate feeling of panic and nervousness, followed immediately by extreme excitement and really like, ‘This is happening,’” Smith said.

He rushed the 25 minutes to Bridgestone Arena and signed his amateur tryout agreement. An equipment manager handed him a hastily-arranged jersey with “Big No. 32.”

A good goalie number. That would work.

“I really just tried to stay out of everybody’s way,” Smith said. “Obviously my experience was incredible for me, but these guys had a job to do and I didn’t want to interfere with any of them.

“When I finally did jump in net to take a few shots, I was feeling incredible. I was like, this is so great. The adrenaline was hitting so hard, I felt like I was moving a million miles an hour.”

He got an up-close look at the deliberations before the game. There was an option, according to Avalanche coach Jared Bednar, to postpone after four players including Kuemper were ruled out in less than 48 hours.

“There was a certain fire they had the whole game,” Smith said. “The locker room experience was really cool, too, to see these guys rally together in their situation and go out and play a competitive game.”

Smith’s pair of lower-level tickets provided by Nashville went unused. Usually he has a list of potential cohorts but during the mad dash to the arena there wasn’t time to contact everyone.

His friend Seth Baylis received a screenshot of Smith on the ice for warmups about 20 minutes before puck drop and knew he needed to be there. He and his girlfriend power-walked to Bridgestone Arena, bought standing-room only tickets, strategically inched their way closer to ice level and tried in vain to get Smith’s attention through the noise.

Sitting in the tunnel behind the bench, Smith thought he heard someone yelling his name.

“He finally saw me,” Baylis said. “I could tell he was pretty excited.”

“It was very panicked and frantic and last-minute. But it all worked out,” he said.

The Predators won 5-2 and Francouz was in net for Colorado throughout. Smith left with a hat, his jersey and fond memories.

The Avalanche and Predators paused early for the holiday break amid a COVID-19 outbreak. Once play resumes, it will be time for Smith to trade “big No. 32” for his customary Predators pullover.

He can be found in his usual seats, on his YouTube channel, on Instagram — rooting for the next member of the EBUG network called into action.

“They seem to be very supportive,” Baylis said. “It does seem to be a pretty good group of guys.”

And, of course, hoping for another chance of his own.

“If it was me in those shoes, I think it would slowly chisel away and (I'd) get a little bummed that it hasn’t happened again,” Baylis, who also played goalie, said.

“I’m sure that the wait was very well worth it.”

How do you get this gig?

The Seattle Kraken held tryouts. Sometimes it’s who you know.

According to the team, Colorado has multiple EBUGs who sit away from the Ball Arena stands at ice level.

Smith is one of three, he estimated, in Nashville. He’s established in the role and gets first dibs.

“It's been a pretty loose experience the whole time,” Smith said. “Every year it’s just a text from (goalie coach Vanderklok) saying ‘Hey, do you want to be our EBUG again?’ And it’s like, uh, duh?”

Do you have to borrow gear from the injured goaltender?

Probably not. That was Smith’s personal gear, which is why it was navy blue and gold.

Smith has gotten to know longtime Predators goaltender Pekka Rinne, who announced his retirement in July. Rinne has given Smith some of his own gear, including a chest protector and sticks.

“There was one point years ago, he gave me a full set of pads and gloves,” Smith said.

According to SportsNet, Ayres borrowed Marlies goalie Kasimir Kaskisuo’s mask and pads on his big night. Per ESPN’s, Foster’s gear was his own.

Do you get paid?

The amount varies by team, Smith has heard, and some don’t get paid at all. He gets a flat-rate $50 per game night on top of his Predators tickets and has to clock in and out.

What if you appear in a game?

Game-time EBUGs sign one-day amateur tryout agreements, which according to the collective bargaining agreement, don’t come with a payday.

It was reported that he earned $500, but Ayres clarified that he wasn’t paid. The Hurricanes reportedly gave him gifts afterward, including some of their own money.

Do you actually get to enjoy the games?

The rule, at least in Nashville, is generous.

“I was told, ‘We can’t tell you not to drink, but please don’t get hammered or anything like that,’” Smith recalled.

“I'll go grab a bite to eat here and there. Sometimes if I do want to grab a drink, it’s usually halfway through the third period,” Smith said. “The game’s pretty much over at this point. I think I can go have a shift beer.”

How was Ayres the first EBUG to record a win? Joining a game in progress means the goalie of record may have already been decided.

Foster saved all seven shots he faced for the Blackhawks. But Collin Delia, who was in net for all of the scoring before leaving with an injury, picked up the win.

Per the NHL, "a goaltender receives a win, tie or loss if he is on the ice when either the game-winning or game-tying goal is scored."

Avalanche notebook: Tips from a heavyweight, plus Byram returns to practice Monday

The NHL announced Friday that the Colorado Avalanche's next four games have been postponed.