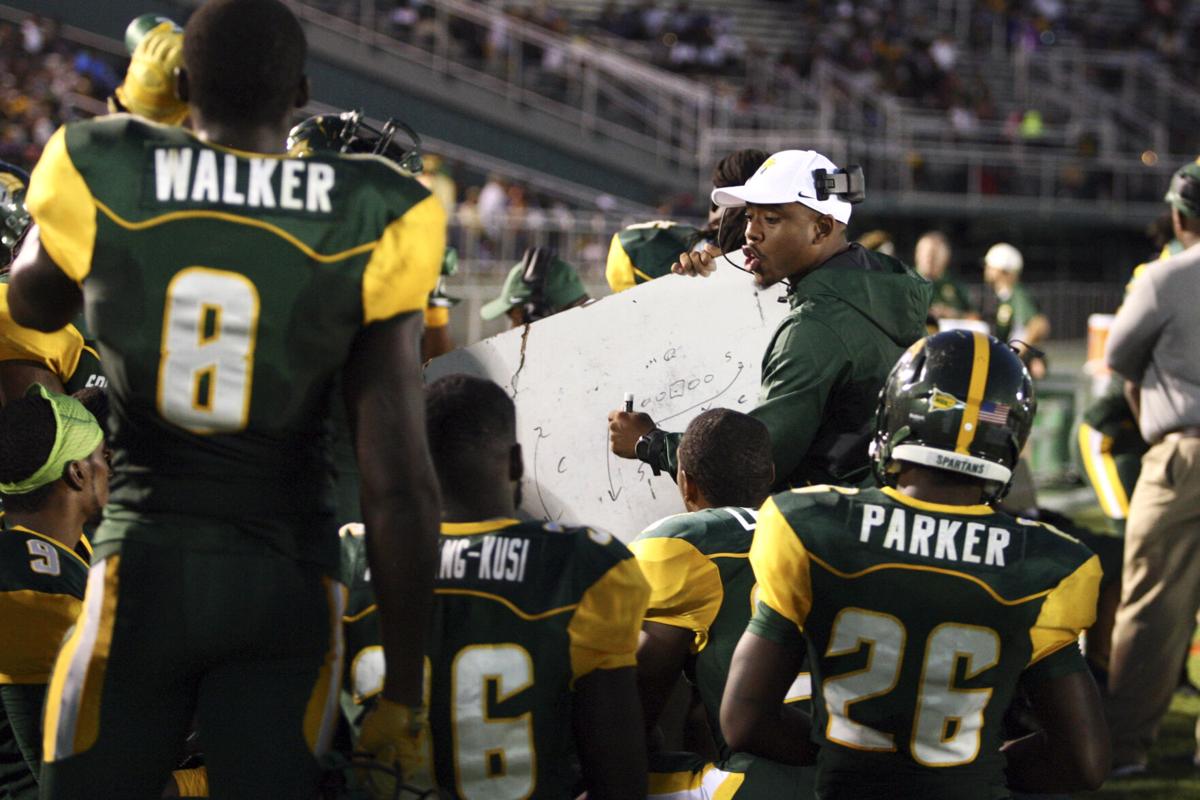 Christian Parker talks to his players during a game at Norfolk State in 2016. 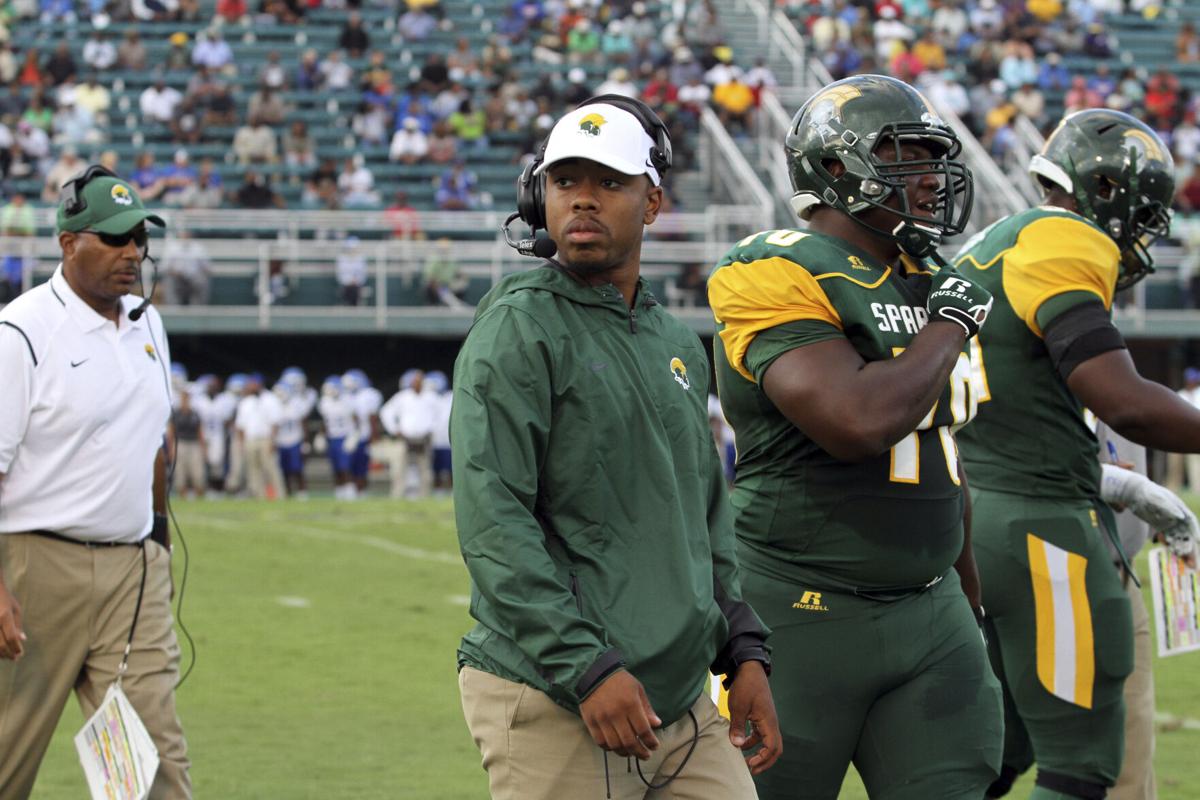 New Broncos DBs coach Christian Parkers roams the sidelines during a game at Norfolk State in 2016. 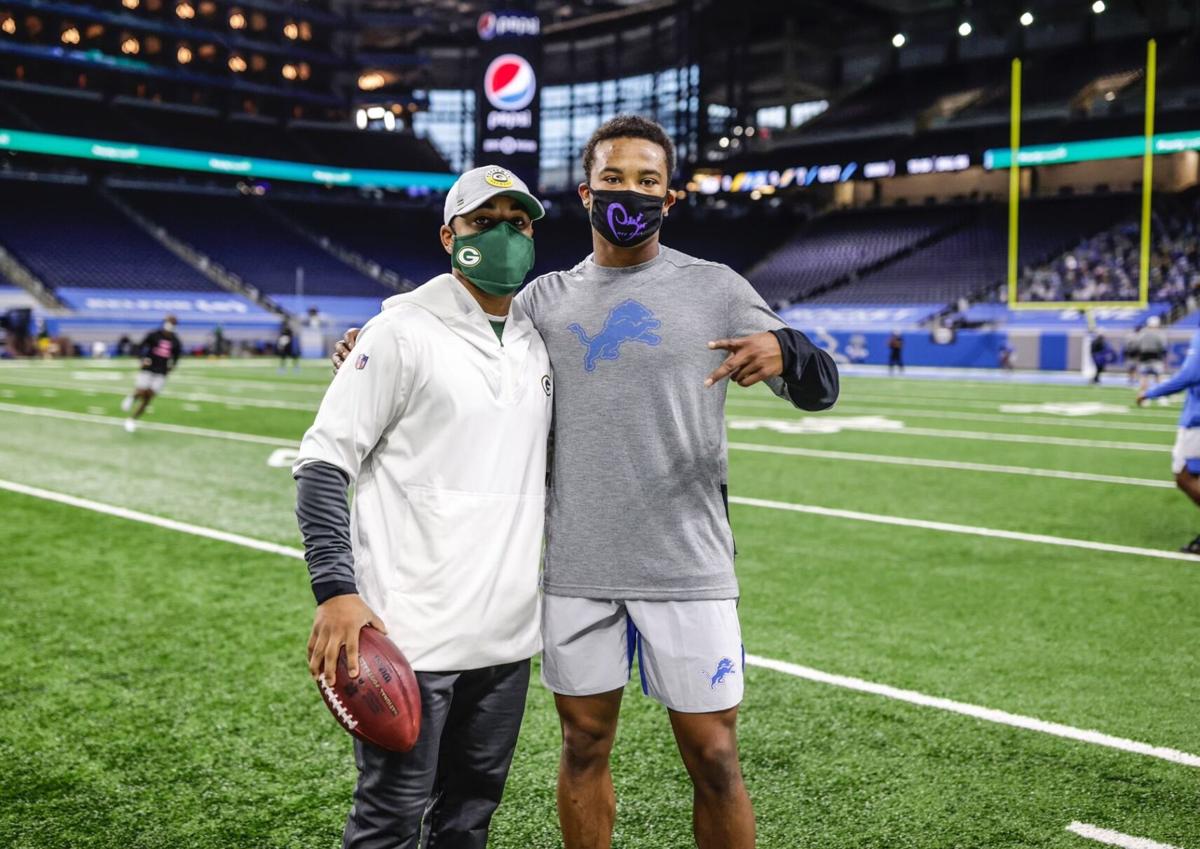 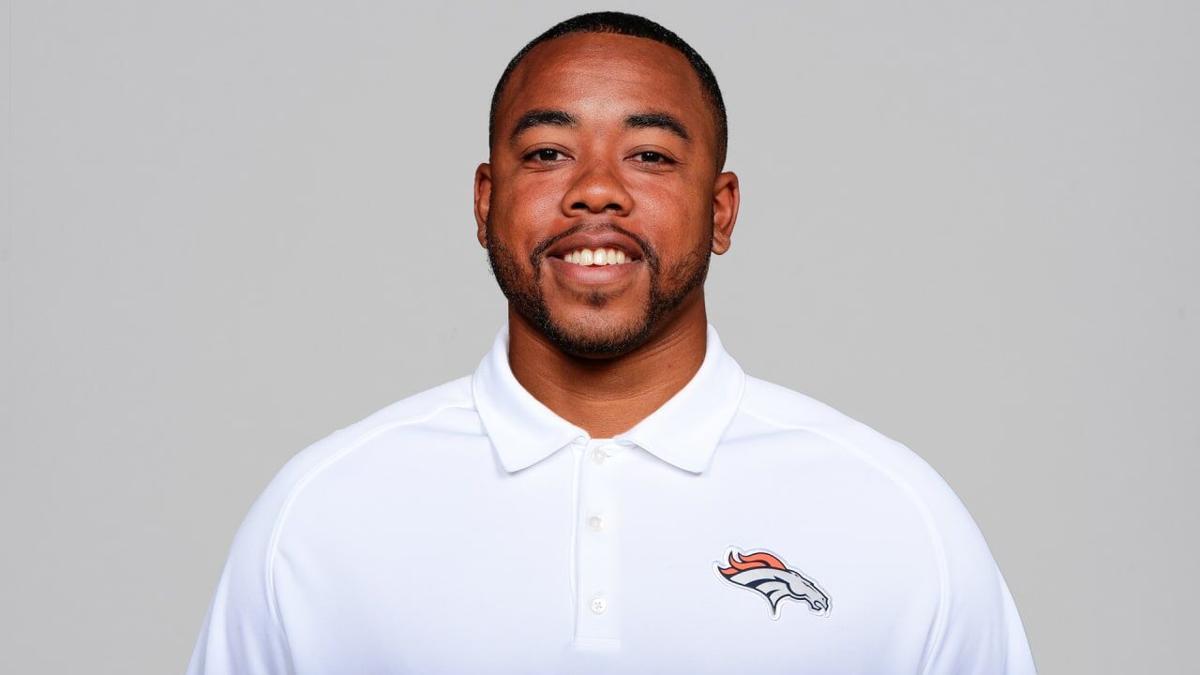 At the time, Davis had recently helped the Broncos to back-to-back Super Bowl wins in 1998 and 1999. Parker, meanwhile, was playing for the Kanawha youth football team in Richmond, Virginia.

“I was a big fan of Terrell Davis back in the day, with the Mile High salute,” Parker told The Gazette. “I actually did (the salute) in rec games and got a flag one time."

Parker, now 29, was named the Broncos’ defensive backs coach Feb. 8, coming from Green Bay where he spent the last two seasons as the Packers defensive quality control coach. He joins the Broncos as the youngest position coach on staff, having risen quickly in the college coaching ranks, spending time at programs such as Notre Dame in 2017 and Texas A&M in 2018.

But it’s his years at Virginia State and Norfolk State — two historically black colleges — that helped ignite his coaching journey. And in many ways, it's the lessons he learned at those schools that have those who know him best believing he will succeed in the NFL.

“I think if you look at what Christian has done in his young career, it proves that if you go in and you do the right things and you coach and you lead, you can end up anywhere — no matter where you start,” said Latrell Scott, who hired Parker at Virginia State and Norfolk State, where he’s still the coach. “The reason a 29-year-old guy is able to manage a situation like this is because he understands people, understands players and I think the players in Denver are getting a very valuable asset.”

What will the Broncos do with Von Miller? Denver's deadline to pick up his $18M option is quickly approaching

Those who have either worked alongside or have been coached by Parker at Virginia State and Norfolk State say he’s more than ready for the tough task ahead, replacing well-respected former DBs coach Renaldo Hill who left to be the Chargers’ new defensive coordinator.

Because whether it’s been walking on at Richmond, coaching at two HBCUs, turning a high school quarterback into a future NFL safety, Parker has always exceeded expectations.

“There was a lot of stuff he did for us that wasn’t usual for the type of school we went to. He was going above and beyond,” said Bobby Price, who Parker coached at Norfolk State and now plays for the Detroit Lions. “To see how far he’s gone, in that little amount of time, just shows you what he’s capable of. He’s elevating each season. Him getting this DBs job, it’s only a matter of time before he gets a defensive coordinator job because he’s able to do it. And then after that, he might even be a head coach.”

Parker says he knew he wanted to be a football coach in middle school. He was never the best athlete growing up, but was always considered one of the most intelligent, football-savvy players.

In high school, he helped Battlefield High (Haymarket, Va.) to its first district championship in school history his senior year. He was a two-time all-district cornerback, while also being an all-district selection on the basketball team. This led him to Richmond — which has an enrollment of around 4,000 and an acceptance rate of only 28 percent, according to U.S. News — where he walked on the football team while earning a degree in political science.

“He was a walk-on and he ended being a scholarship guy by the time he was a senior, so that kind of tells you the type of kid he was,” said Scott, who was the coach at Richmond in 2010. “He was very smart, very driven, very charismatic. And he literally graduated from Richmond one week and the following week he joined our staff as a GA at Virginia State.”

Parker opted out of playing a fifth year at Richmond to follow Scott, who was named coach at Virginia State in 2013. Parker spent his final semester at Richmond driving 40 minutes almost every day after class to make spring practices at Virginia State, despite not being a full-time graduate assistant yet.

He was promoted to secondary coach in 2014. After helping Virginia State to its best season in school history that year, Scott left for Norfolk State and brought Parker with him to be his secondary coach and head recruiting coordinator. It was there that Parker really found his stride, becoming one of the best recruiters in Virginia and one of the many young coaches on Scott’s staff who have gone on to be successful at bigger universities.

“He was always smart as a whistle. He was a really talented, young coach,” said Montario Hardesty, who coached alongside Parker at Norfolk State and is South Carolina’s running backs coach. “I always knew he was going to be a great coach. I think he’s going to be a DC or head coach one of these days because he’s very organized and meticulous at what he does. He puts in the hours and relates with the guys.”

There’s no better example of Parker’s impact and the strong relationships he forged at Norfolk State than Price, who Parker recruited out of high school.

Price was standout quarterback in Virginia, but Parker didn’t recruit him to play offense, instead convincing Price he could be a star at safety — a position Price had never played. Even Scott questioned Parker recruiting Price, but said he knew Parker “had an eye for talent” and trusted Parker's judgment.

Price went on to start all four seasons at safety for Norfolk State, totaling seven interceptions and 30 pass breakups in his career, while earning an all-MEAC second-team selection his senior year. He is the only Norfolk State player on an NFL roster, signing with the Lions last offseason.

“He taught me everything I know about defense,” Price said. “I didn’t know a lick about it. If it wasn’t for him, I wouldn’t know anything about defensive football. He’s a very intelligent man.”

Parker’s time at Norfolk State was short-lived, after accepting a better position at William & Mary following the 2016 season. His time there was even shorter, being hired as a defensive analyst by Notre Dame only months later. In South Bend he met then-defensive coordinator Mike Elko, who left after the 2017 season for Texas A&M and, like Scott, brought Parker with him. Parker found a good amount of success during his two seasons with the Irish and Aggies, which eventually led him to Green Bay, joining longtime NFL coach Mike Pettine’s staff.

Today, when Parker reflects back on his rise in the coaching ranks, he credits a good amount of it to his time at HBCUs, where nothing was easy and he was forced “to be creative” to get the most out of players that some may have not spent the time on.

“I think the No. 1 thing is just being authentic,” Parker said. “When I was at those schools, it was more hard work, really developing strong relationships with the recruits and the families and people in the community. ... So many people have to wear so many hats. As a recruiting coordinator, I ran our one-day camps, I ran all our official visit weekends, obviously I coached the secondary, I was doing things with clients, you're doing things on campus, you're going and talking to the ladies in the dining hall or whatever it is, but you just wear so many different hats.”

Parker likely won’t be doing any recruiting or running camps or talking to the lunch ladies in Denver, but he will have to get creative.

He takes over a secondary group that suffered several major injuries last season and may look entirely different come the season opener. With the release of veteran cornerback A.J. Bouye and safeties Justin Simmons' — who many expect to be back next season — and Kareem Jackson’s future in question, he could also be coaching a relatively young group, especially if the Broncos take a corner at No. 9 in the draft.

Parker also joins a staff that has its back against the wall heading into the 2021-22 season, as coach Vic Fangio enters the final year of his three-year contract. But that’s also the exact reason he left Green Bay, because he believes in Fangio.

For Parker, the opportunity to coach alongside a defensive guru like Fangio was too much to pass up.

“I always had a lot of respect for coach Fangio and (defensive coordinator Ed) Donatell and the scheme they run,” Parker said. “When they were in Chicago, right before I got to Green Bay, just kind of seeing them on cut ups and different things. (Cornerback) Kyle Fuller, who played with him in Chicago is one of my good friends and Adrian Amos, who I coached in Green Bay, played in this scheme as well and just kind of hearing some of the details and adjustments kind of always piqued my interest. So I just decided to study it for myself in the offseason and the opportunity to come in and learn from those guys and work with them and also just a phenomenal organization — just so many players and so much tradition in this organization, there's just a lot of respect for it.”

So far, Parker says he’s had little trouble adjusting to the NFL. There’s things here and there that are different about the game, most notably the amount of resources available to him and learning how to best utilize them.

But at its core, Parker believes coaching at any level — from Virginia State to the Broncos — starts with building trust among players, a lesson he learned early in his coaching career.

“No. 1 is them knowing that it's not just a business transaction, in terms of the coaching,” Parker said. “I think that being able to get on the personal level with your players and understand how they actually learn because some guys they have to walk through it, some guys can see it on film, some guys they need to test, some guys they can just hear you talk about it on the board, but you have to understand how those 15, 20 guys in the room learn differently and reach them all so that they can have success on the field when it's game time.”

Parker moved to Denver earlier this week, a transition that has gone relatively smooth, other than having to move his collection of over 200 shoes — being a sneakerhead is his favorite pastime when he's not coaching. His first day in the Broncos' facilities was also earlier this week, saying he’s excited for what lies ahead for not only the Broncos, but also his career, hoping his time in Denver can be a launching pad to fulfilling his dream of being an NFL coach some day.

For now, though, he’ll settle for a turnaround season in 2021 for the Broncos, starting with his secondary.

“The next step is just the one that's in front of me right now, helping continue the excellence in this secondary, being a top unit in the league, taking the ball away and really limiting explosive plays and doing all those things that great secondary's do,” Parker said. “That's kind of the main thing that's on my mind right now is just being able to kind of take that next step into this and work with these guys. We've already had a bunch of great meetings with the coaches, just getting on the same page with the scheme and everything. But once guys get in here, just being able to put our stamp on things and be one of the top units in the league, that's the goal right now.”

The clock is officially ticking on Broncos safety Justin Simmons' future in Denver.