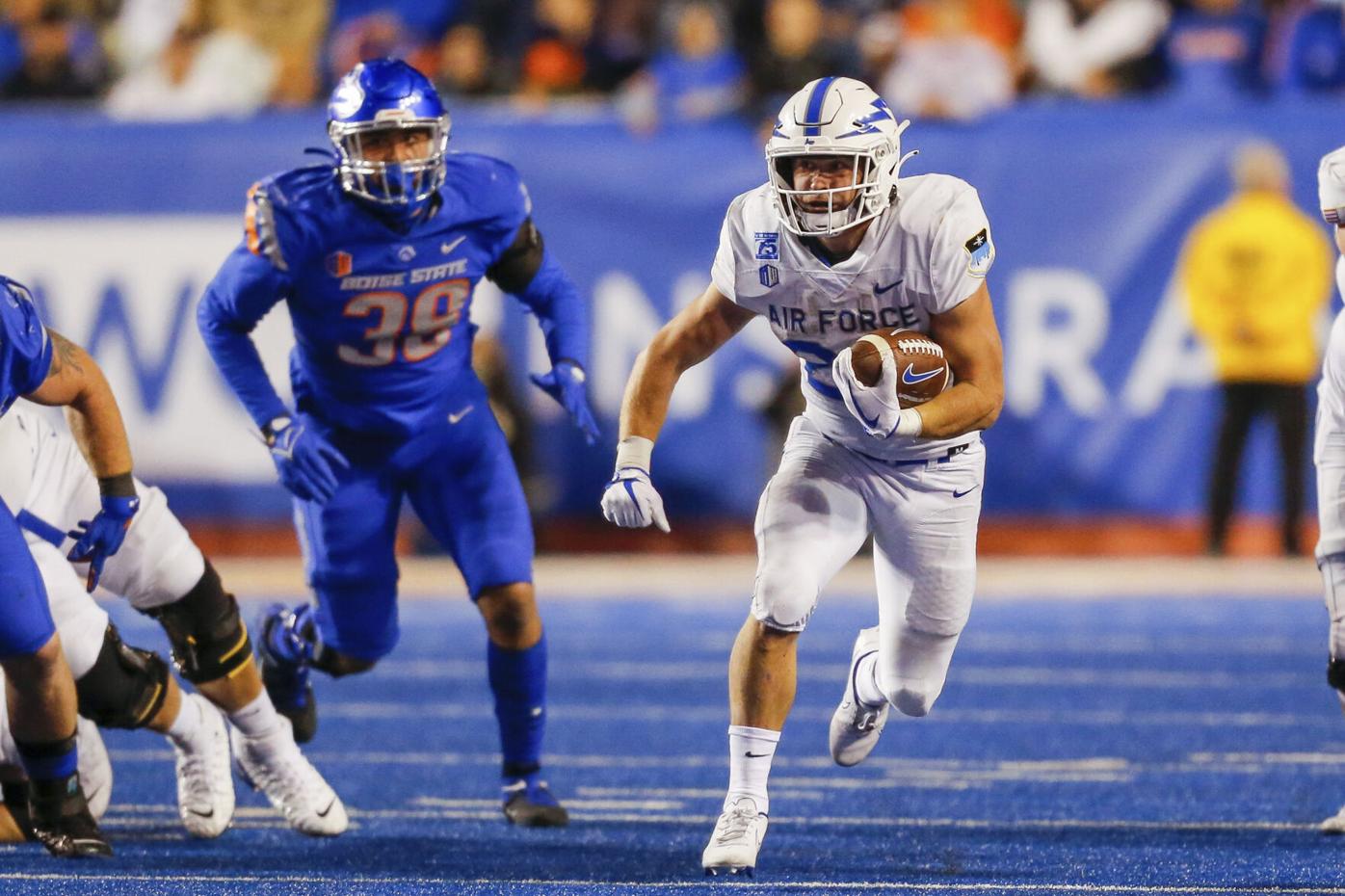 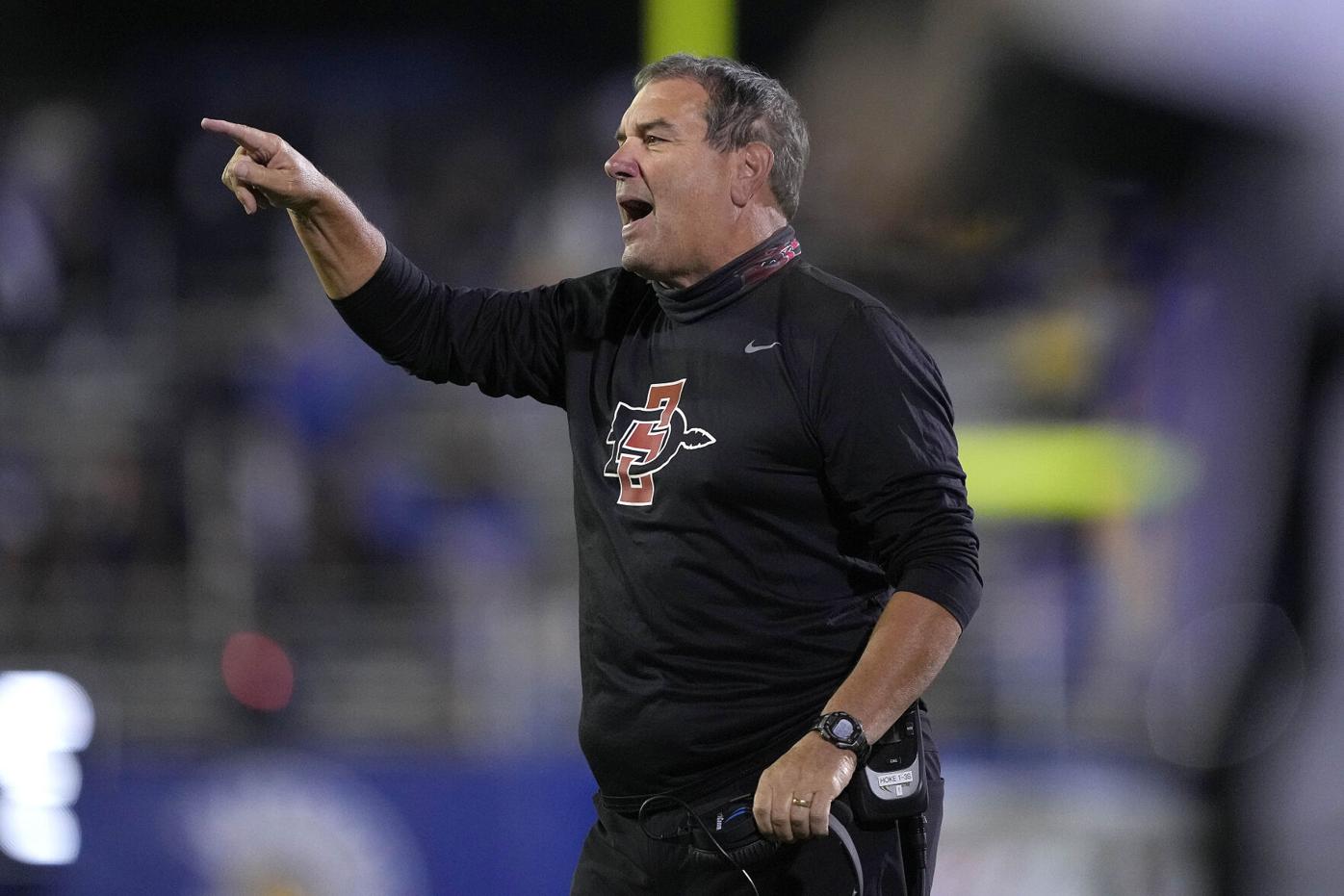 Before he responded with any words, he offered a brief reaction with unmistakable authenticity.

Yep, the idea of stopping the run altogether is laughable. For both sides this week.

What makes this games so intriguing — besides the obvious attraction of conference foes with combined 13-1 records — is that the No. 21 Aztecs are as equipped to defend Air Force as anyone in a matchup that is truly strength vs. strength at the highest level.

“With my background always has been you’ve got to stop the fullback,” Hoke said when trying to explain the multiple elements that go into defending the triple option as Air Force runs it. “That’s the first element.”

Hoke hasn’t seen the Falcons since returning to San Diego State in 2020, replacing Rocky Long. But he has plenty of history. He faced coach Troy Calhoun’s Falcons in 2009-10 in his first run with the Aztecs, then held on to beat Air Force 31-25 in 2012 while at Michigan.

“Went down to almost the last play,” Hoke said. “I didn’t want to play Air Force.”

As conference foes, there’s no avoiding Air Force for San Diego State when the teams play two years on, two years off in the schedule cycle for teams from different divisions. They didn’t play in 2019-20, and San Diego State carries an eight-game series winning streak into Saturday. The past three victories, including the 2015 conference championship game, went to the Aztecs by four points or fewer.

“Air Force is always a dogfight every year when we play them,” cornerback Tayler Hawkins told the Gazette in July. “It’s definitely a different type of game. You’ve got to come with your big-boy pads on when you play Air Force for sure.”

A lot of season remains, but this game could go a long way toward determining division champions and even the location of the Mountain West championship game. The Aztecs are 6-0 for the second time in the past 46 years. Air Force is 6-1 for the first time since 2002.

The Falcons are four-point favorites for the 5 p.m. game at Falcon Stadium on CBSSports Network.

“This is definitely, definitely our biggest challenge of the year,” said Hoke, whose Aztecs have defeated Utah and Arizona from the Pac-12, and last week survived 19-13 against San Jose State in double overtime.

Of course, the challenge runs both ways. The Aztecs’ running game will attack off the tackles, challenging the Falcons to stay in their gaps or risk cutbacks from running backs like Nebraska transfer Greg Bell, who has run for 565 yards.

The Aztecs also utilize their quarterbacks in the running game and announced on Tuesday that senior Lucas Johnson, who is averaging 5.9 yards per carry, will start this week.

“It’s going to be a good test for sure, especially going into Army the week after,” Air Force nose guard Kalawai’a Pescaia said. “So, I’m looking forward to the opportunity of playing a very good team.”

BOISE, Idaho – Tre' Bugg walked off the blue turf at Boise State on Saturday knowing his senior year would include a bowl game and a very spec…