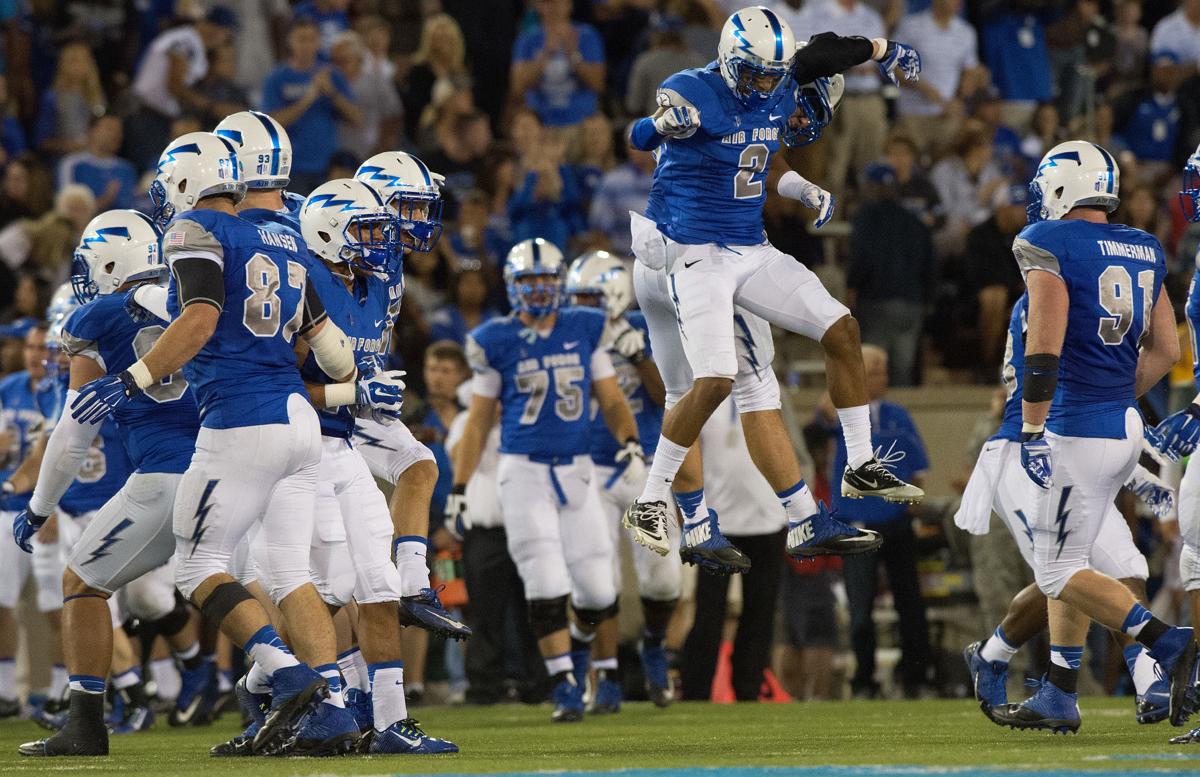 Air Force defensive back Jordan Mays jumps into the air as the Falcon defense celebrates after recovering a Boise State fumble during the third quarter Saturday, Sept. 27, 2014, at Falcon Stadium on the Air Force Academy, Colo. (The Gazette, Christian Murdock) 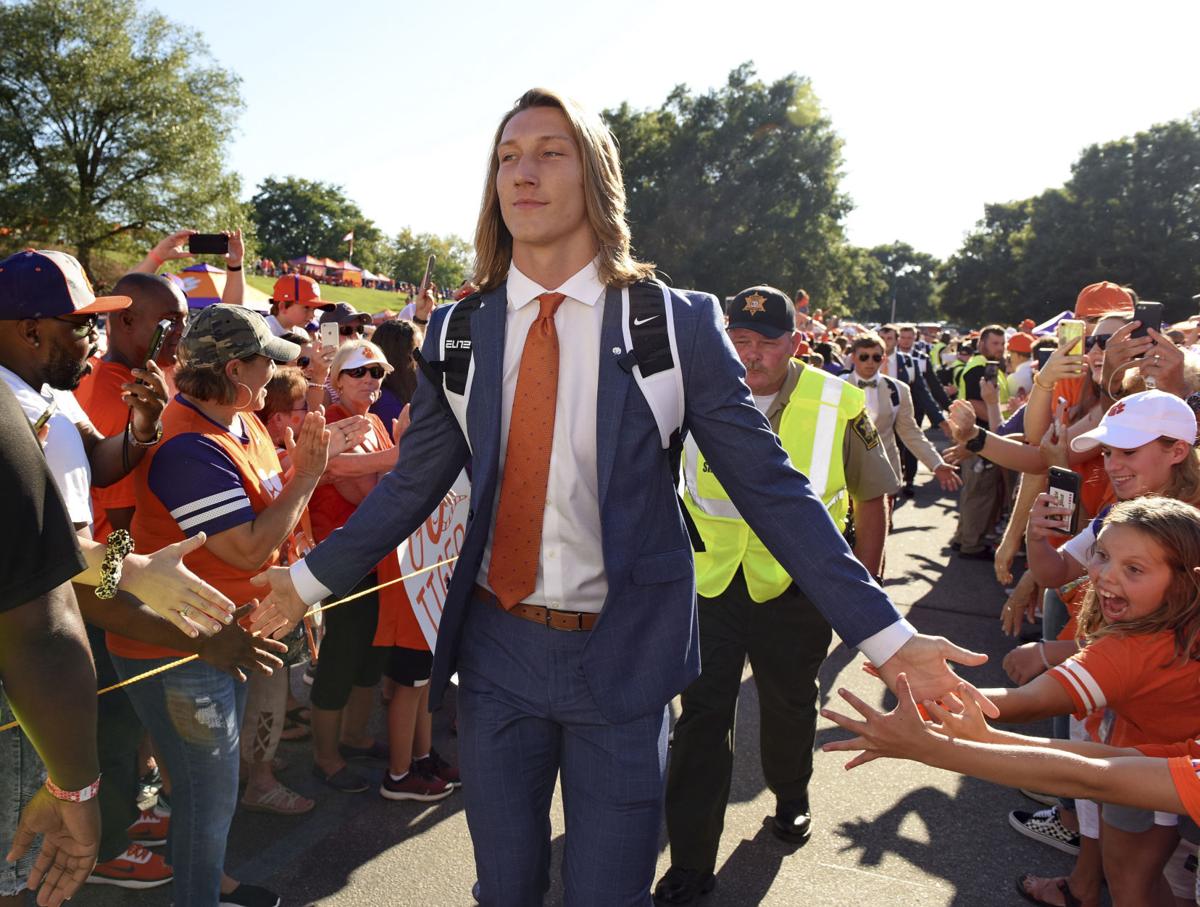 Clemson’s Trevor Lawrence greets fans as he arrives for a Aug. 29, 2019, game against Georgia Tech in Clemson, S.C.

Air Force defensive back Jordan Mays jumps into the air as the Falcon defense celebrates after recovering a Boise State fumble during the third quarter Saturday, Sept. 27, 2014, at Falcon Stadium on the Air Force Academy, Colo. (The Gazette, Christian Murdock)

Clemson’s Trevor Lawrence greets fans as he arrives for a Aug. 29, 2019, game against Georgia Tech in Clemson, S.C.

DENVER — The gap between the Haves and Have Nots in college sports is growing wider.

Just like the rest of a society that continues to postpone life, really.

Under the guise of athlete health and safety, the Mountain West Conference on Monday canceled its fall seasons — not only for Troy Calhoun’s football program, which was set up for another monster campaign, but for cross country, women’s soccer, women’s volleyball as well. The conference said it will explore the possibility of fall sports competing in the spring. Athletic director Nathan Pine said Air Force will “continue to explore competitions against Army and Navy if conditions allow as we have similar physical missions across the service academies.”

Explore away, because this was a crushing development for the athletes who had their seasons stolen away. Crushing for Air Force soccer stud Lexi Romero. Crushing for steeplechase wiz Hunter Boyer. Crushing for golfer Luke Trujillo, the former Discovery Canyon state champ.

Crushing across the Mountain West: "Imagine losing something you have spent thousands of hours working on with actual blood, sweat and tears over a period of years and to be ripped away from you. That’s the loss of football," CSU defensive end and former Palmer Ridge football star Aidan Cullen tweeted.

It was on Wednesday the Mountain West released a revised plan to go forward with fall sports — just five days before the crushing announcement. Why isn’t clear. But that’s quite a leap in a short time from “Let’s do this!” to “Surprise!” at a time when coronavirus numbers seem to be improving. It’s Aug. 11, and the Colorado health department has reported five deaths from the virus this month. We dropped below 200 hospitalizations due to COVID-19 for the first time in over a month.

“Nothing is more important than the health and well-being of our students, student-athletes, coaches, faculty, staff and overall communities,” said Dr. Mary Papazian, San Jose State president and chair of the Mountain West board of directors.

The notion a player would be safer without the health protocols, immense resources and inherent incentive that college football provides must have born in academia. It’s that wacky.

At the Mountain West’s level and above, decisions to nix football seasons were not about player health and safety. They were mostly about cost and liability, if you ask the multiple college coaches I spoke with Monday. Those coronavirus tests the Broncos are getting turned around in less than 24 hours through a lab in Texas? They run over $100 a pop. And the liability of something going wrong with a student-athlete in regards to the coronavirus presents a serious obstacle.

ESPN.com reported the Pac-12 will vote to cancel its fall football season as soon as Tuesday. It will cite player health and safety, but that’s untrue again. It’s untrue unless you can identify a situation — outside of a Power Five football program — where a college student has access to three performance nutrition specialists, four psychological health professionals, nine strength and conditioning coaches and 28 sports medicine experts. That’s the health-and-safety lineup in CU-Boulder’s athletics department. College football players are safer without football? Not a chance.

Coaches are far more concerned with Saturday night house parties than Saturday afternoon games, and the latter is the one going away.

“Look, players are a lot safer with us than they are running around at home,” Alabama coach Nick Saban told ESPN.com.

Plus, they’ll be safer than running around a college campus with far less incentive to maintain their eligibility, avoid virus-spreading bars and generally make the most of a college experience that only comes around once. Speaking from my own experience as a long-ago college athlete, 6 a.m. workouts make for some serious incentive to get some sleep.

Calhoun wasn’t talking Monday, but here’s a hunch he will be on board with a decision to delay the Air Force football season until the spring. The son of a nurse, Calhoun had been cautious about the potential dangers of the coronavirus starting all the way back in March.

“People are at just as much risk, if not more risk, if we don’t play,” Clemson star quarterback Trevor Lawrence tweeted with the hashtag #WeWantToPlay.

And maybe he will play, because Clemson is a Have and the gap between the Haves and Have Nots is growing wider. It's true as the MWC and MAC cancel fall football, even as the SEC and ACC appear ready to charge ahead. It's true outside of the games we play, with Amazon CEO Jeff Bezos adding $13 billion in one day while 300,000 Coloradans hunt for a job. It’s true as a defund-the-police movement hurts our neighbors who need good police the most.

There's a sentiment out there that America does a crummy job of helping the most vulnerable.

Start life again, and maybe we can.

The Mountain West postponed its fall sports season, citing challenges presented by the coronavirus. Football, volleyball and all other sports are on hold, left with only the possibility of competing in the spring.