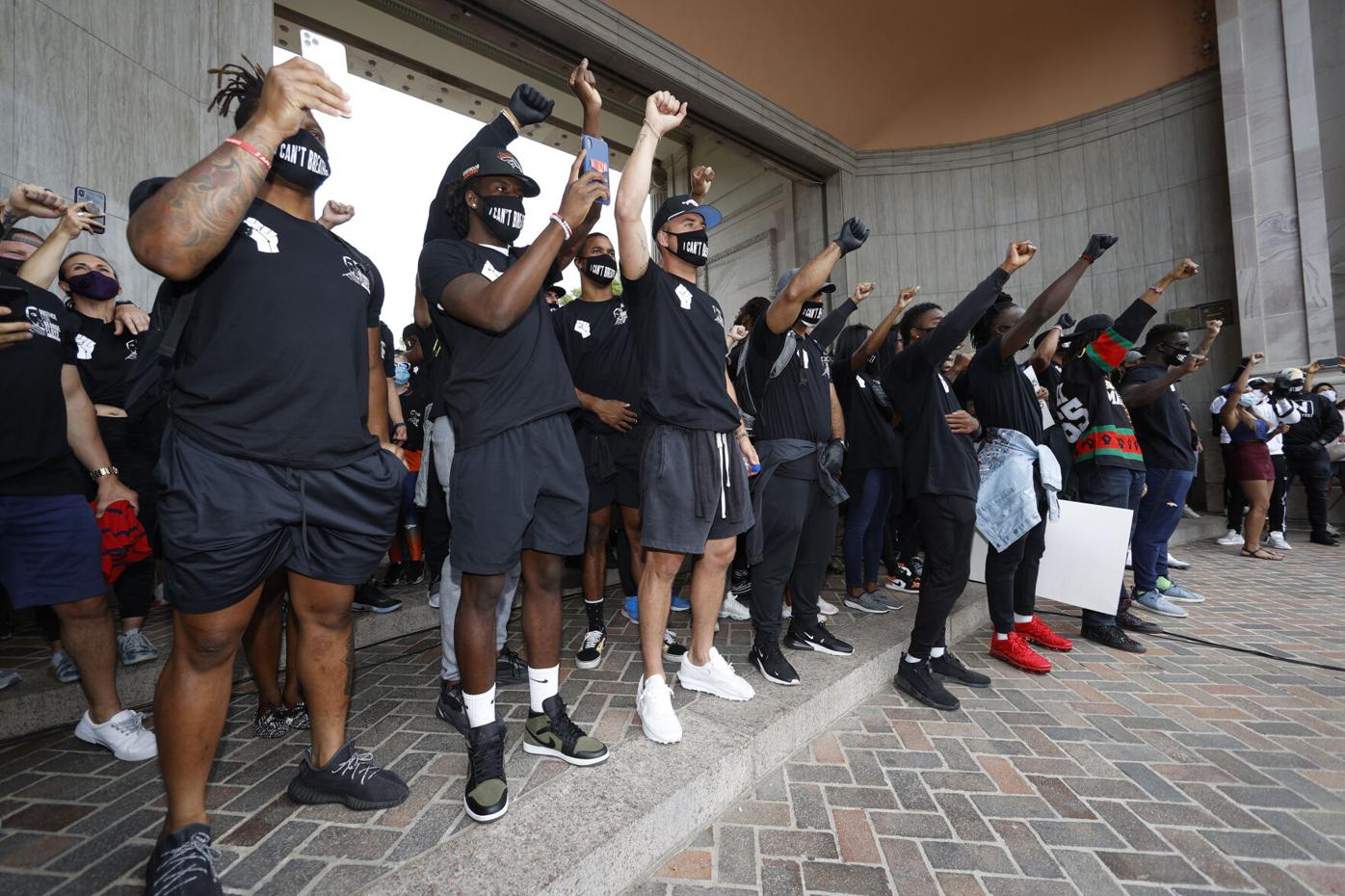 Denver Broncos take part in a rally Saturday over the death of George Floyd, among other issues, in downtown Denver. 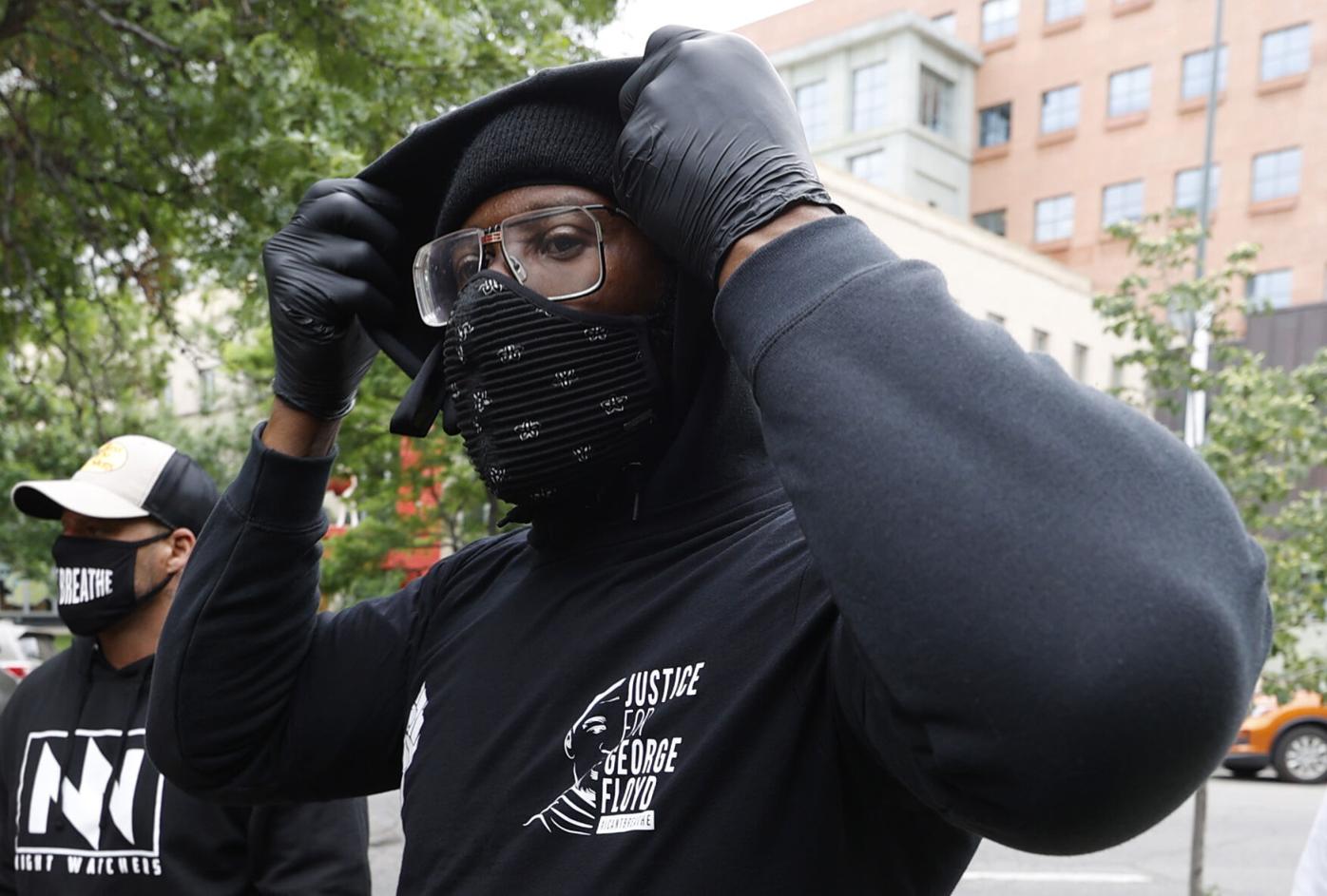 Broncos linebacker Von Miller pulls up the hood on his sweater to take part in a rally with teammates Saturday in the Greek Amphitheatre in Civic Center Park over the death of George Floyd in downtown Denver. 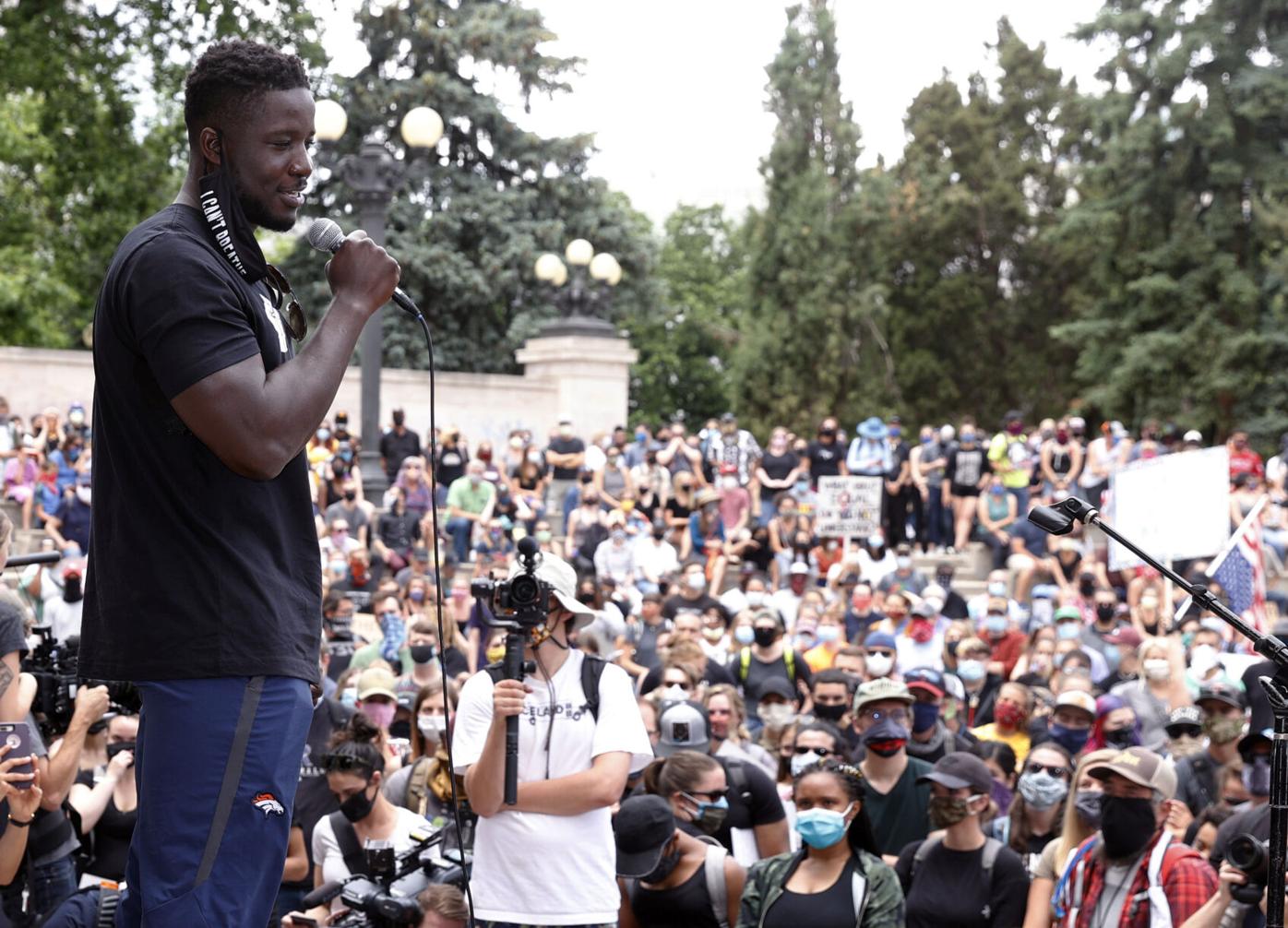 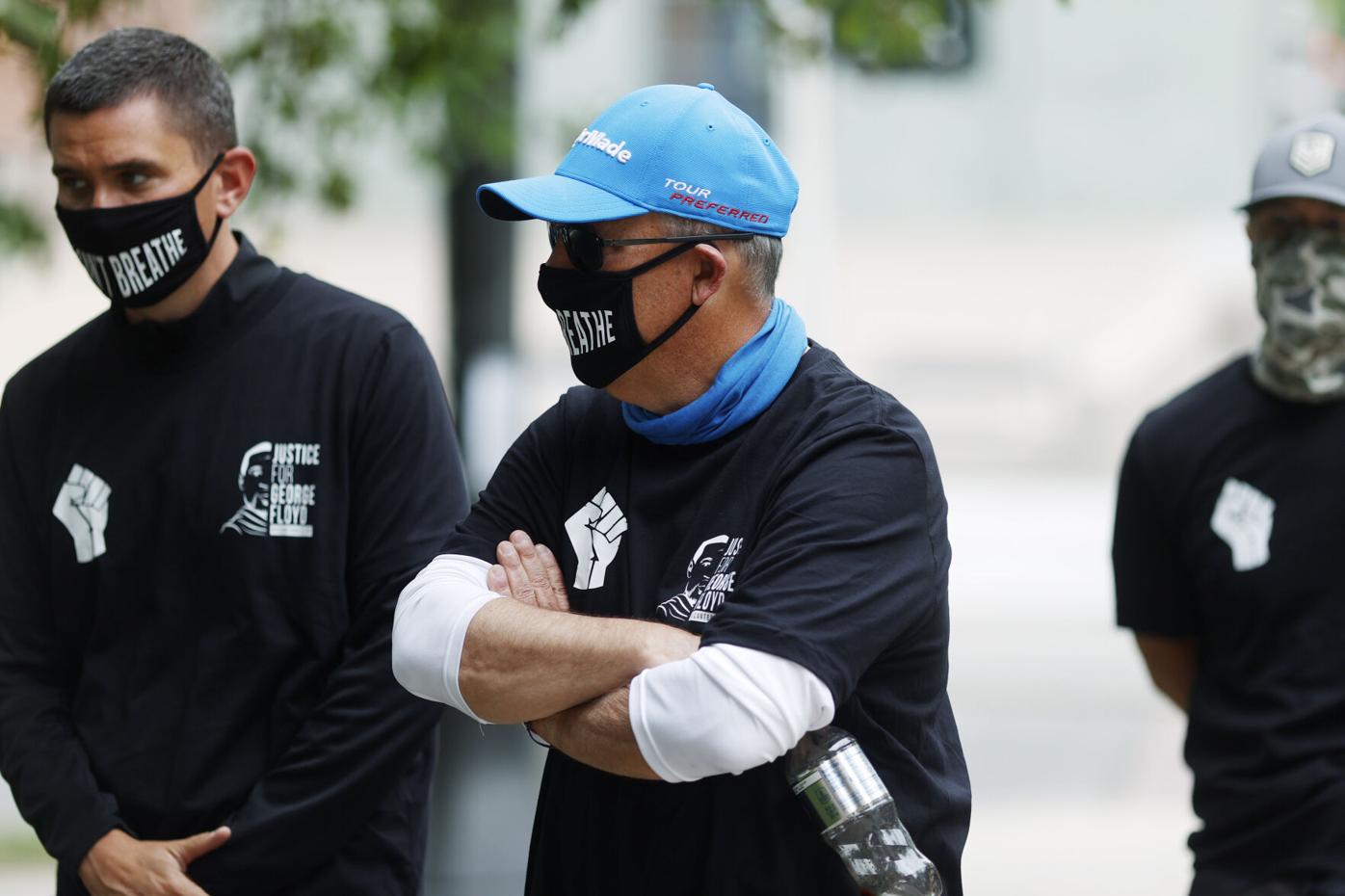 Broncos coach Vic Fangio, center, takes part in a rally with players Saturday in the Greek Amphitheatre in Civic Center Park in Denver in response to the death of George Floyd. 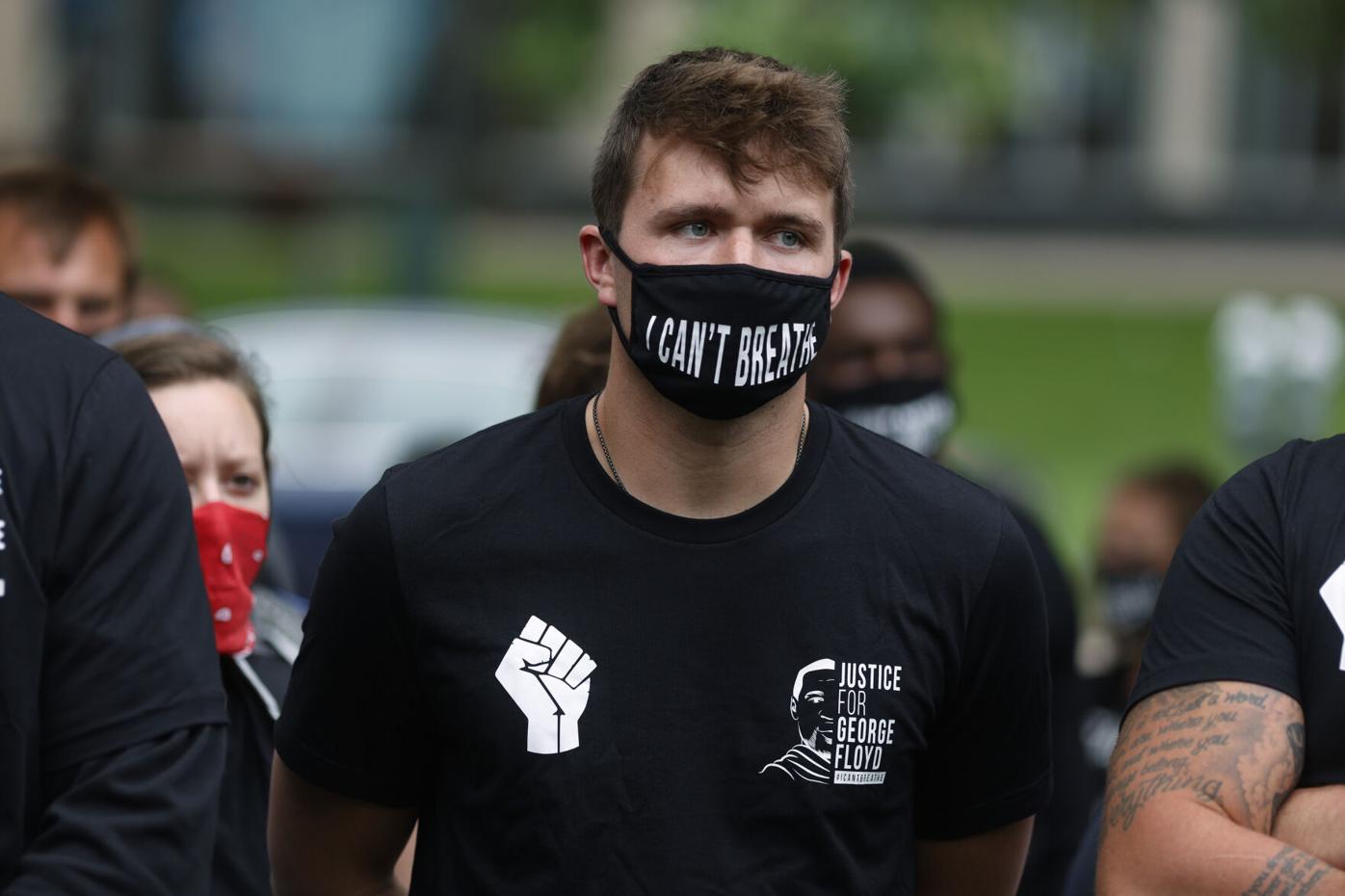 Broncos quarterback Drew Lock wears a face mask as he takes part in a rally with teammates Saturday in Denver.

Denver Broncos take part in a rally Saturday over the death of George Floyd, among other issues, in downtown Denver.

Broncos linebacker Von Miller pulls up the hood on his sweater to take part in a rally with teammates Saturday in the Greek Amphitheatre in Civic Center Park over the death of George Floyd in downtown Denver.

Broncos coach Vic Fangio, center, takes part in a rally with players Saturday in the Greek Amphitheatre in Civic Center Park in Denver in response to the death of George Floyd.

Broncos quarterback Drew Lock wears a face mask as he takes part in a rally with teammates Saturday in Denver.

DENVER — Behind the stage at Civic Center Park, under an old tree, the Broncos met the emcee of the racial justice rally.

He instructed them so: “Be truth. Be real. Be organic.”

Von Miller's eyeglasses bobbed under a black hoodie. Wearing a mask that read “I Can’t Breathe,” Drew Lock nodded in agreement. In a T-shirt that shouted, “If you ain’t with us, you against us,” Courtland Sutton raised his right fist.

“The time is always right to do what is right.”@VonMiller addresses the crowd at today’s protest: pic.twitter.com/vkLvph36aM

The Broncos officially have joined the protests.

Roughly 75 members of the organization put the correct foot forward Sunday in an impressive show of leadership. They gave speeches to explain why they chose to join the millions of protesters across the world. They blended in with the crowd that embraced the NFL franchise and acknowledged the impact one can have.

Goodell says NFL was wrong for not listening to players

Colin Kaepernick: Timeline of a gesture and its echoes

The attendees ranged from 21-year-old rookie Jerry Jeudy to coach Vic Fangio, 61, who wore a shirt with an image of George Floyd, the Minneapolis man killed by a police officer.

“What’s the goal?” linebacker A.J. Johnson said into a microphone. “What everybody else has been doing the last 10 days!”

Broncos players said they were there for different reasons. To protest police brutality. To snuff out racism. To encourage the young crowd to study lawmakers. They asked the world to listen, so here’s what I heard.

The chant echoed down from the stage where the Broncos began their march. It continued throughout the hourlong march. The first two speakers — defenders Jerry Attaochu and Justin Simmons — leaned on Scripture to express their “why.”

“Racism is the result of a fallen man,” Attaochu said. “And we all have sinned.”

If the Broncos continue to attach their fortunes to men like Attaochu and Simmons, they will be in good hands. Attaochu called for "change" in the form of education and school choice after his own experience in inner-city Washington.

“Now it’s time to spotlight the people who are making the laws,” Johnson added.

Simmons has been at the forefront of the movement. His address focused on an explanation to why protesters have an issue with the phrase "all lives matter."

"In order for that to happen, black lives must matter,” Simmons said.

Johnson, the emerging linebacker, also cited the Bible when he took the mic. “Ephesians 6:12,” he summarized, “the devil is trying to cloud our vision.” Johnson said he was there to “make a better world” for his 2-week-old daughter.

“I want her to grow up in a wonderful, peaceful world,” he said.

But the statement that defined the Broncos’ leap into the divisive protests was not made Saturday, or by a current player. It was made Friday night by John Elway, their greatest player.

“What I’ve heard from players in particular — and watching the way they lead during this time of need — has been moving,” Elway said in a statement. “I always thought that since I grew up in a locker room, I knew everything there was to know about understanding teammates from different backgrounds and walks of life. What I’ve realized is that I could not have been more wrong.”

The presence and momentum of these protests figure to continue well into the NFL season. And Elway’s heightened role figures to be under a microscope around these hills and nationally.

“I am not going to stay on the sidelines,” Elway said. “Everyone has a responsibility to help those who are hurting. I am joining with the players, coaches and our organization in speaking up against racism, police brutality and any injustice in the black community.”

This was the third protest I’ve attended since the marches were triggered in Denver. Saturday was, by far, the most tame and constructive. That's a credit to the Broncos, who were led in by veterans Todd Davis and Kareem Jackson. The only hint of trouble arrived at the end of the march, as a Colorado thunderstorm barreled toward the Capitol: “There’s no such thing as a peaceful protest!” a lone marcher shouted.

But the march that included the Broncos was not without an underlying theme of the movement: to oust Trump from the presidency. Ending Trump is a — if not the — goal here.

The motivation has been evident from the spray-painted Capitol building (“Trump is a pedophile”) to a lone chant that closed Saturday’s march ("(Expletive) Donald Trump!”). During the Colin Kaepernick protests in 2016, the NFL attempted to shut down the activism in what amounted to a business decision. This time it has gone the other way, with commissioner Roger Goodell issuing a show of solidarity with the protesters.

The Broncos spoke Saturday, loud and clear. The spirited nature of their protest sounded more like a demand than a conversation. They've taken a firm stance that Colorado and beyond will be, must be, forced to listen.

Woody Paige: Crying or not, everyone is a loser in baseball money mess