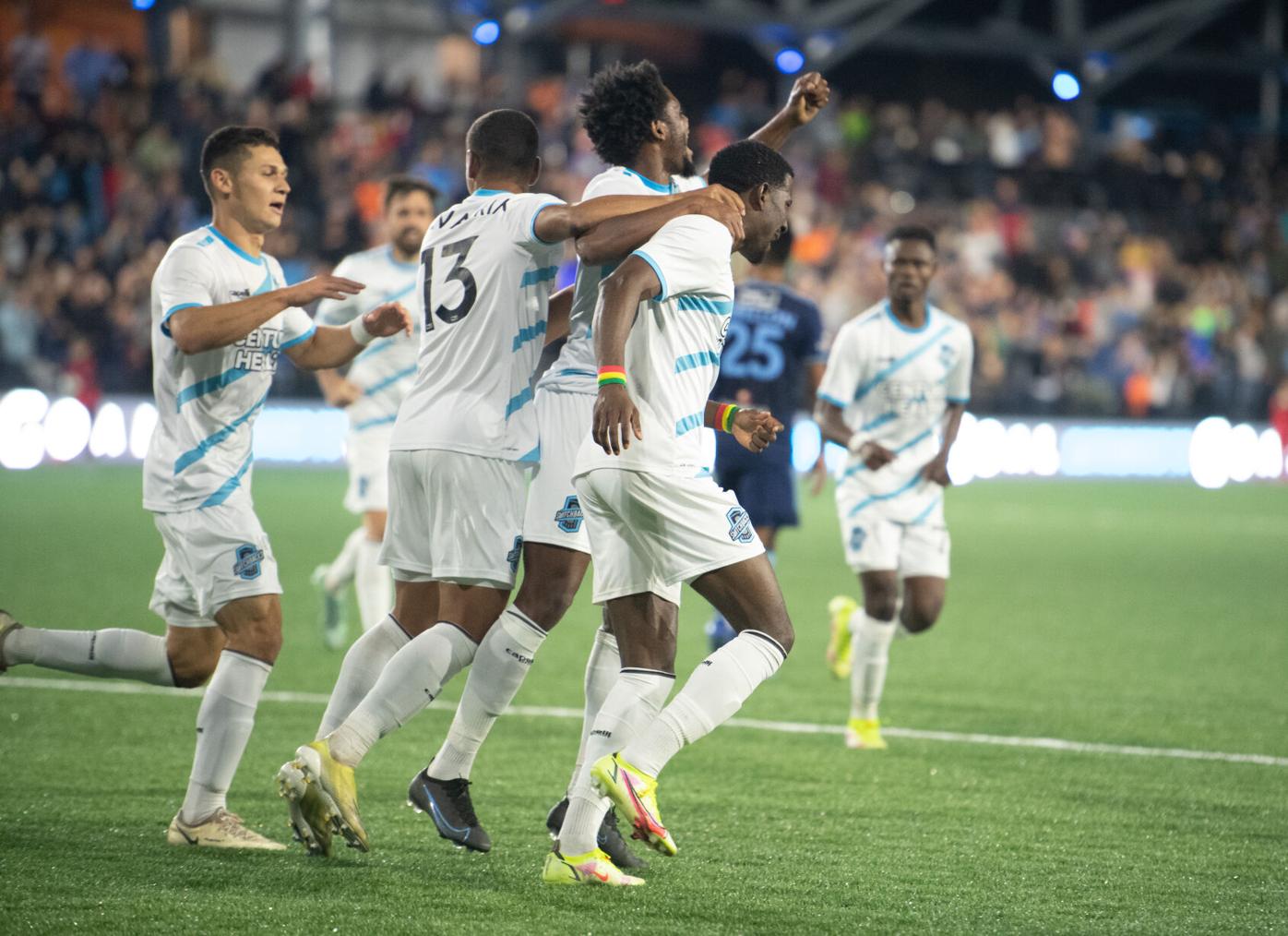 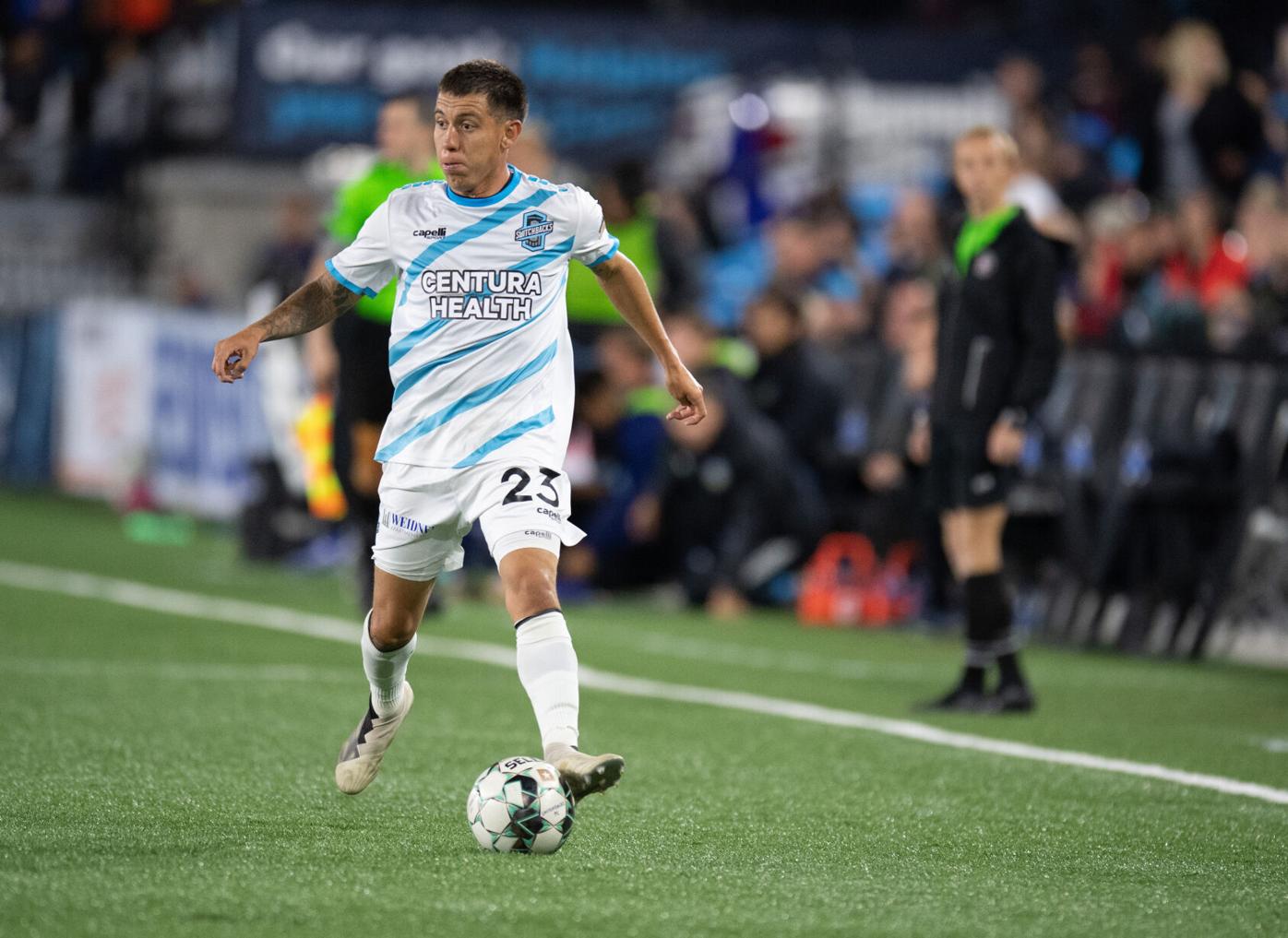 The goal that would tie the United Soccer League Championship’s single-season record was right in front of Hadji Barry for the second straight week Saturday at Weidner Field, but the big celebration will have to wait at least another week.

With the Switchbacks trailing El Paso Locomotive by a goal in second-half stoppage time, Barry found the ball at his foot inside the El Paso box. A hectic sequence in a crowded box saw the ball end up in the back of the net, securing a 1-1 draw for Colorado Springs. The Switchbacks mobbed Barry, who has 24 goals on the season, but it officially went down as an El Paso own goal.

“I would have liked it to have gone in off Hadj, you know, just so he can get there, but there’s really no question in my mind that he is going to get there,” Switchbacks coach Brendan Burke said. “I just don’t want him to force it. We have five games. He needs two goals. Those are going to come.”

El Paso scored the opening goal in the 81st minute when a ball bounced past a Switchbacks defender and right to Locomotive forward Leandro Carrijo, who had an easy finish to beat Colorado Springs keeper Sean Melvin.

“It’s tough,” midfielder Jose Torres said. “You’re dominating the game; you’re having possession. Obviously, they’re the No. 1 team. They have great players, great experienced players. You figure they would come out and play, but they sat back and waited for that one chance to get there, and it did.”

Despite a scoreless first half, the Switchbacks had plenty of chances. Barry played a couple of dangerous passes, but neither Andre Lewis nor Zach Zandi could redirect the ball toward goal. Barry also had a chance to score the opening goal when he flicked the ball over a defender and volleyed a powerful shot right at the El Paso keeper. Barry had another chance in the second half, but his shot went high, while Lewis saw a shot ricochet off the post just before El Paso’s goal.

“You see those guys up front just running. Every chance they almost have, they bury it. Tonight was unfortunate,” Torres said. “If Zach had a little bit longer legs – Andre, too – but we had a good game. The good thing is we didn’t lose it. We got a tie out of it, so we’ve got to keep positive.”

“I think next game, hopefully, I’ll get a little bit more and just keep progressing.”

Serna - while still not fully fit, according to his coach - managed to impress his coach who sees the former Colorado Rapid as a key piece down the stretch.

“He managed the game really well tonight. That was his experience showing through,” Burke said. “He knew when he could get involved, when he couldn’t, but when you’ve played 110 in MLS by 26 years old, you have that experience.”

Colorado Springs was without attacking players Deshane Beckford and Thomas Amang with hamstring strains Burke called “minor.” The Switchbacks were also without midfielder Philip Mayaka, who was called up to the Kenyan national team.

“We performed really well,” Burke said. “I’m not upset with anyone that played in our group tonight at all.”

The Switchbacks return to action Friday at Real Monarchs, the only Mountain Division squad already eliminated from the playoffs. Colorado Springs will enter the match seven points back of El Paso, while San Antonio and New Mexico have chances to get close the gap to second place on Sunday.

“From now on, every game is going to be a playoff game, and we have to take it serious,” Torres said. “We have to win most of the games to stay in second place.”

Colorado Rapids went down a goal early, went down a man later and scored a trio of late goals in a 3-1 win Sunday at Minnesota United.