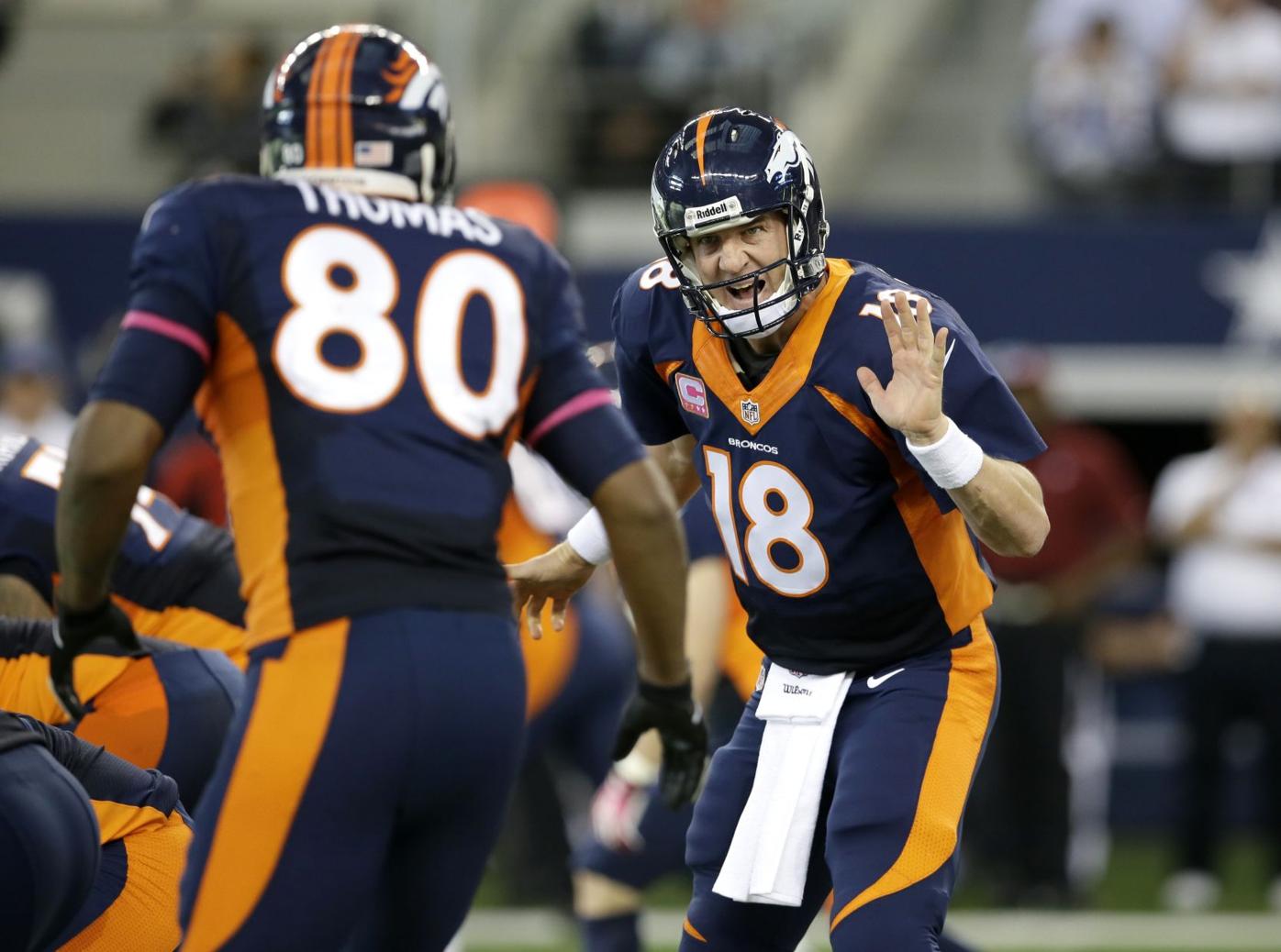 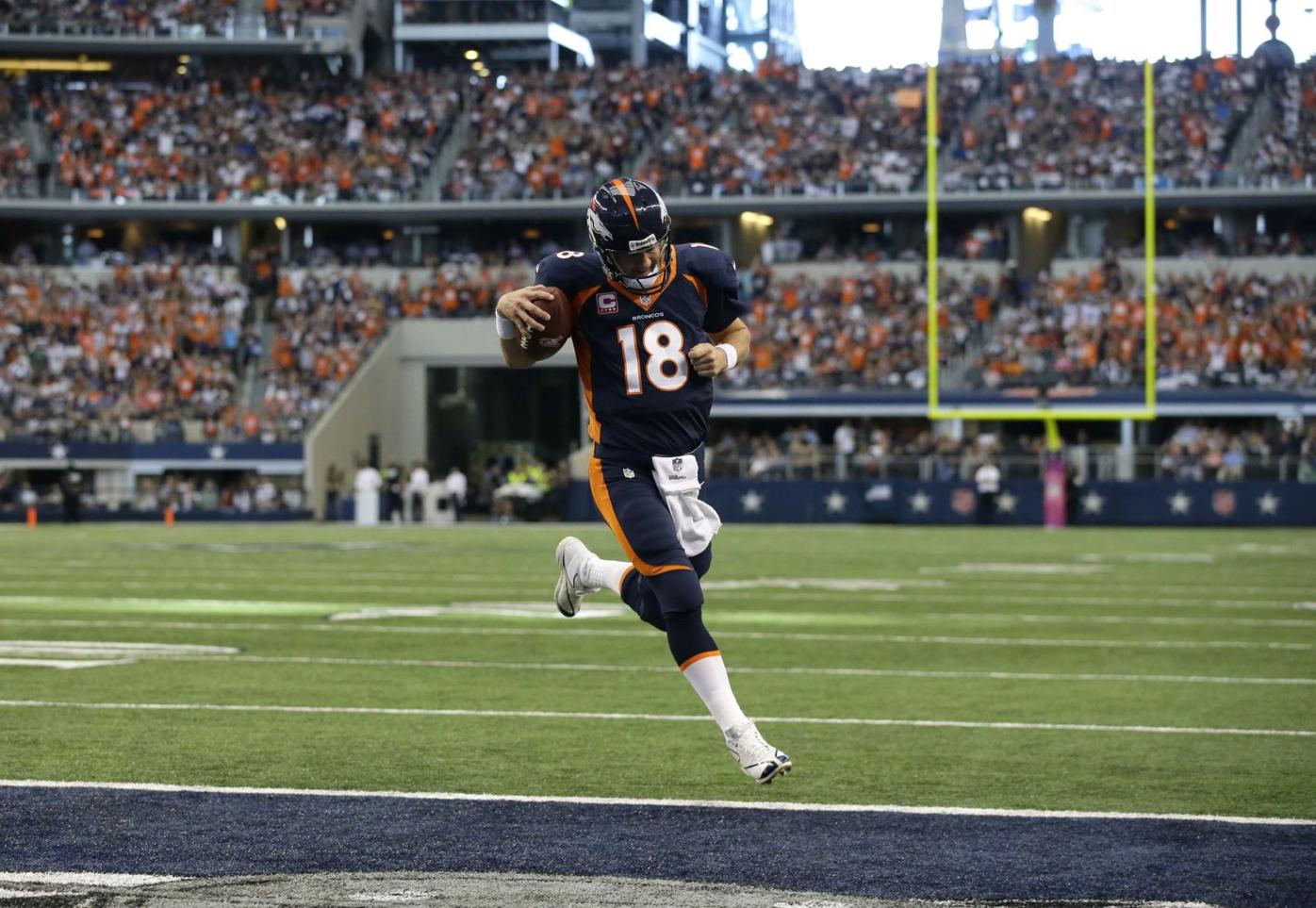 Denver Broncos quarterback Peyton Manning (18) tosses the football after running in for a touchdown on a quarterback keep play late in the second quarter of an NFL football game against the Dallas Cowboys Sunday, Oct. 6,2013, in Arlington, Texas. (AP Photo/Tony Gutierrez) 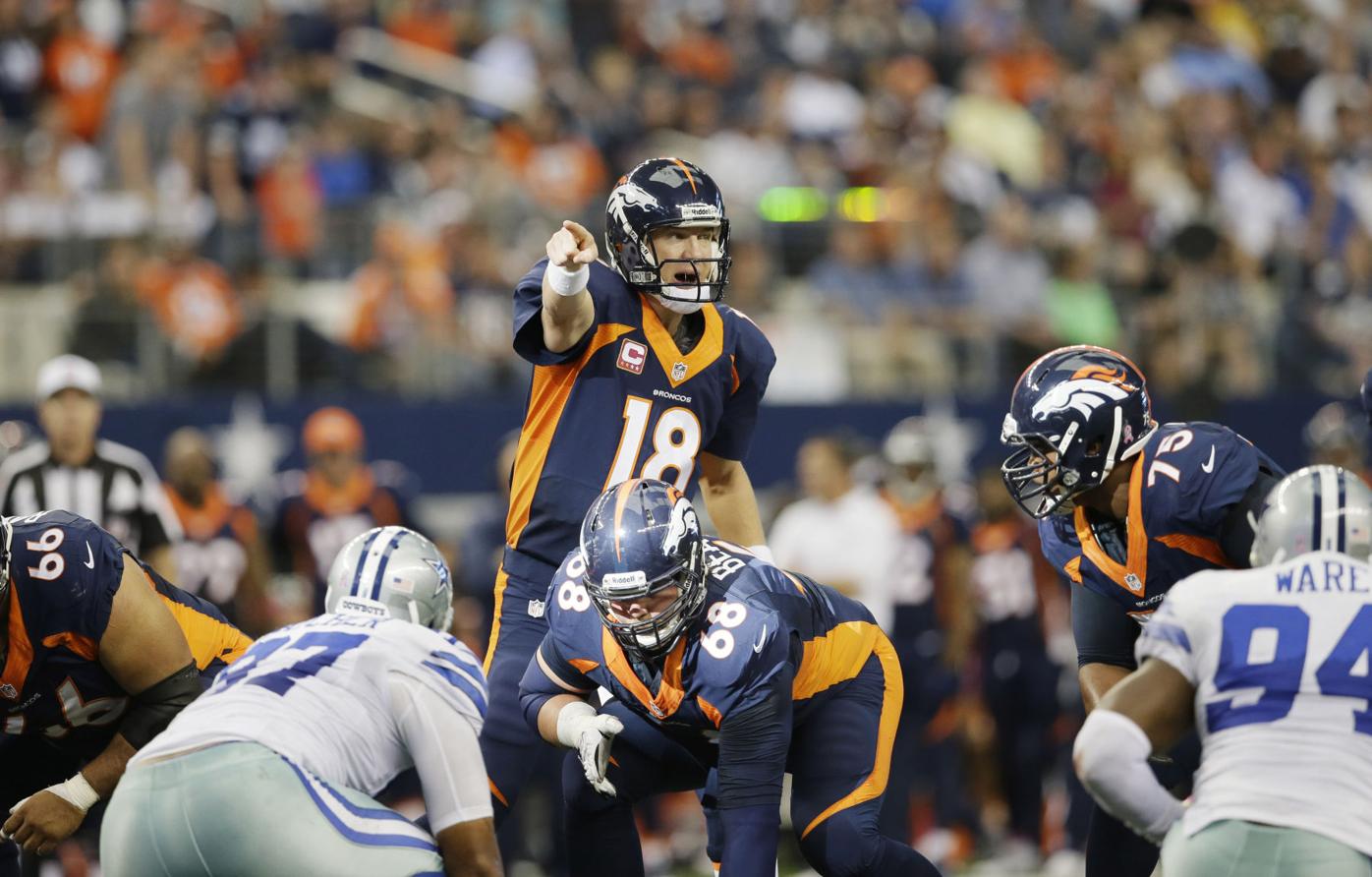 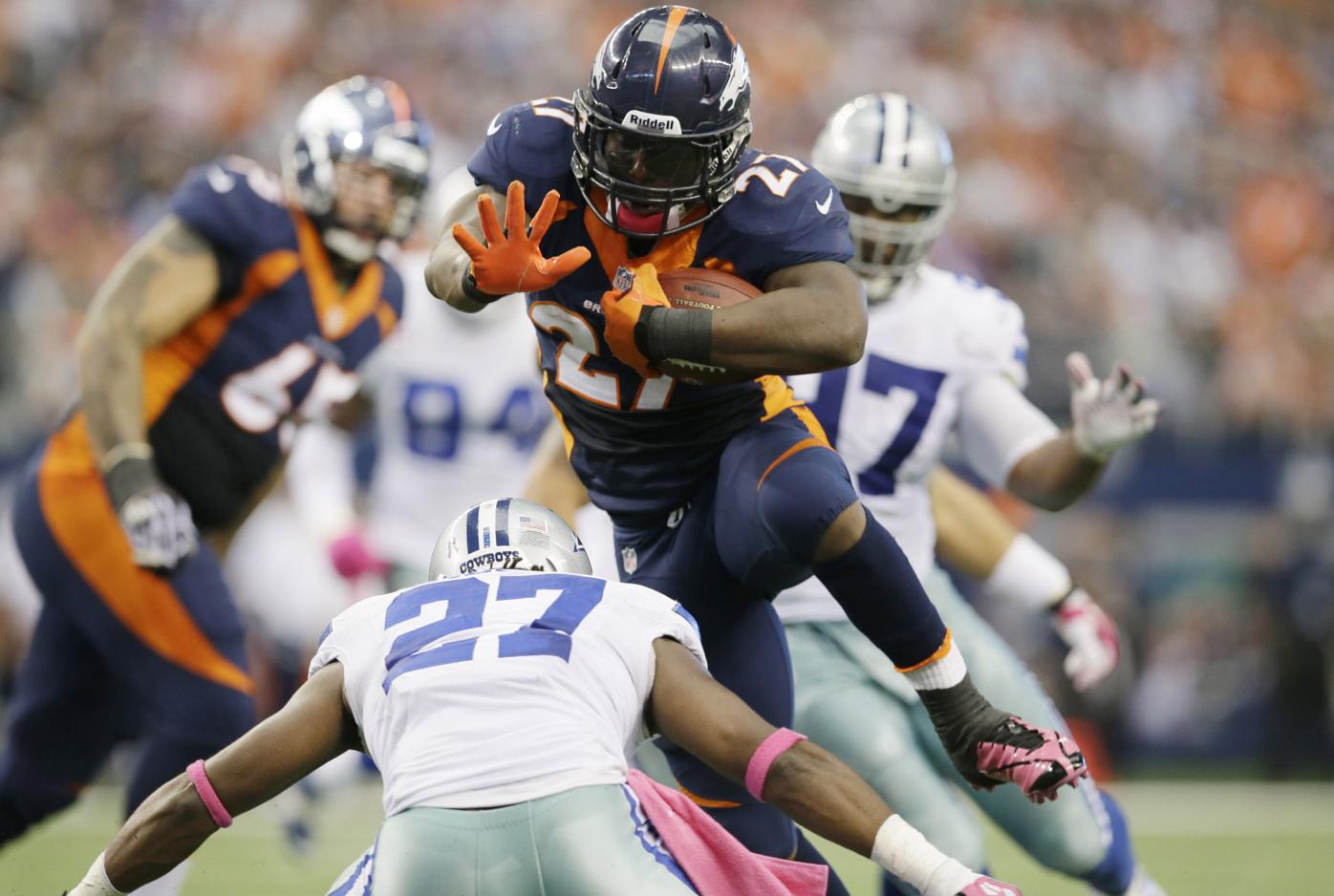 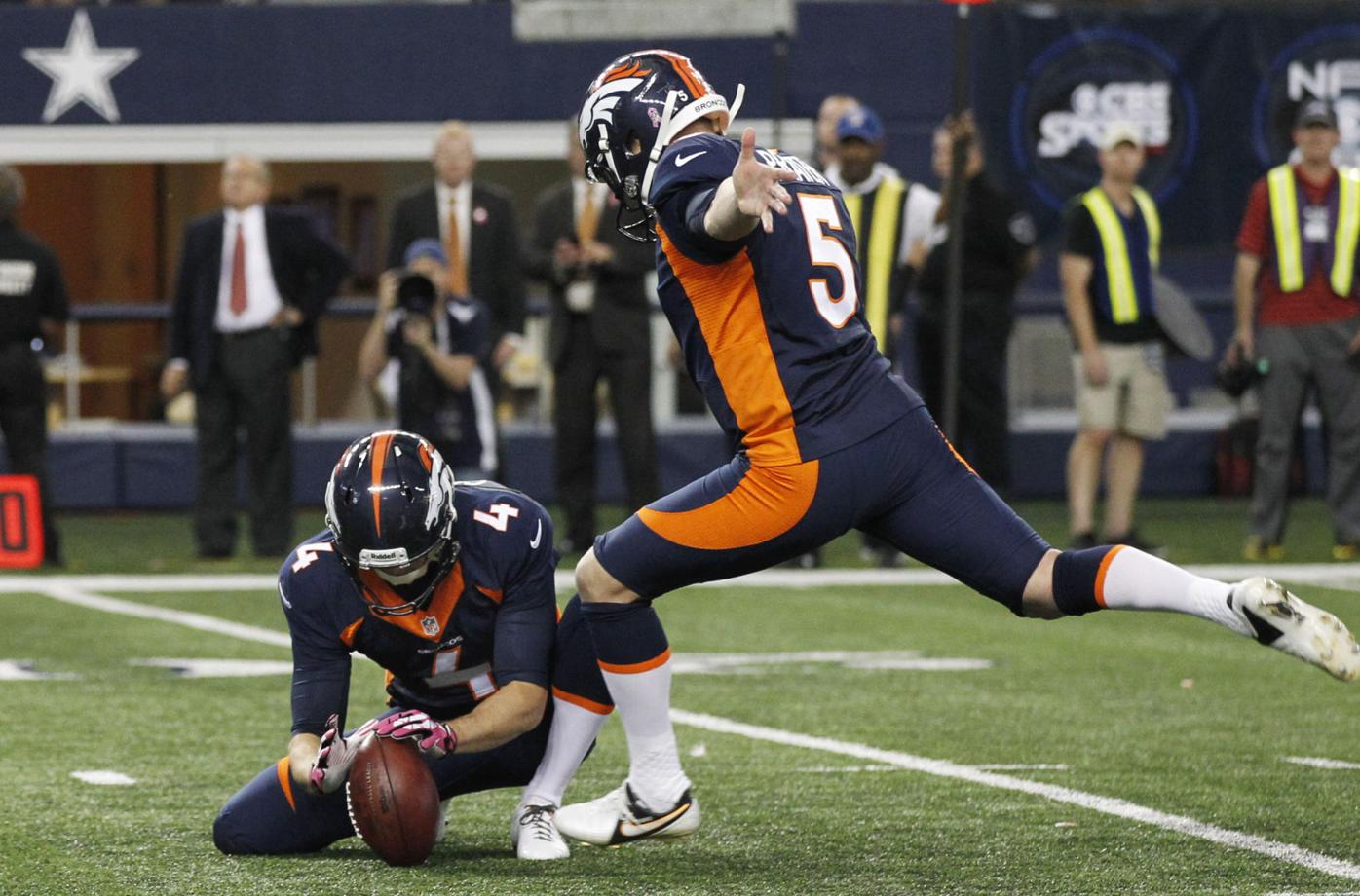 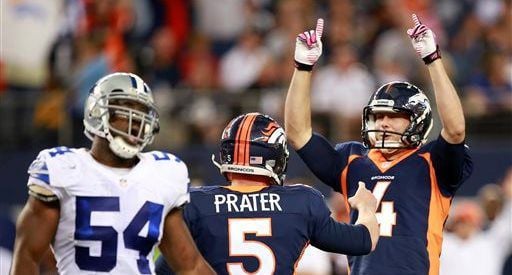 Denver Broncos quarterback Peyton Manning (18) tosses the football after running in for a touchdown on a quarterback keep play late in the second quarter of an NFL football game against the Dallas Cowboys Sunday, Oct. 6,2013, in Arlington, Texas. (AP Photo/Tony Gutierrez)

ARLINGTON, Texas - Have you heard the one about the NFL quarterback who told his running back to NOT score?

Yes, that's a thing. It was a thing in a game that had everything, in a football stadium that has everything, with a quarterback who, it seems, can do anything.

"I was like, 'How?'" Moreno said after the wildiest, craziest, Texas-iest, dadgum game you'll ever see. "I was confused on how to do it."

How, after the Broncos and Cowboys had piled up and piled on 1,048 yards of offense, did Peyton expect Knowshon to run 36 inches but not 72 inches?

The score was tied at 48 and 100 seconds were on the clock at AT&T Stadium. Officially, the Broncos were 2 yards from a touchdown and 1 yard from a first down.

What Peyton wants, Peyton gets. And Peyton wanted only the latter - a first down, not a touchdown - because a touchdown would give the ball to the Cowboys for a chance to tie, or even win.

"I've never been in a situation quite like that, where you need to get the first down but we didn't need to score. That difference was about half a yard," Manning said.

Matt Prater smoked a 28-yard field goal for the 'W.'

"Knowshon and I were arguing," Manning said. "He basically said, 'How am I supposed to do that? How can I get half a yard but not get a yard and half?'"

With games of 49, 41, 37, 52 and 51 points, the Broncos scored a record for the most points through five games in NFL history. How good is Peyton's offense?

It won, perhaps, by not scoring four more.

How can the second-highest scoring game since the AFL/NFL merger, in 1970, be decided by a defensive player?

"Romo threw it and I felt like, 'Man, hopefully I don't drop the ball when I get in the end zone this time," said Trevathan, who, against the Ravens in Week 1, dropped the ball before getting into the end zone.

If ever there was a good time to beat these Broncos, the Cowboys had their time.

The quarterbacks combined for $212 million in contract money, 920 passing yards, 10 touchdowns and two interceptions, including Manning's first this season.

How did the naked bootleg work so well that the closest person to Manning was a dolled-up Cowboys cheerleader? He didn't tell anyone the playcall. Not his coaches or his teammates.

"The key is, you only want to do it every five years or so," Manning joked. "If you do it every game, they're going to be playing it."

How will a tight, crazy game help the Broncos, who had won their previous 15 regular-season games by seven points or more?

"I've always believed in prior seasons you can refer to an earlier game late in the season: 'Hey, remember in Dallas we were down? We can come back,'" Manning said.

How do you beat these Broncos? Remove five defensive starters from their lineup and race up and down for 522 yards of offense. Then, in the final two minutes, let the Broncos score.

"I thought that's what they were going to do," Moreno said.

"And I was like, 'Well, let's see how close I can get without going into the end zone," he added.

On a wild day, How was more like Wow.