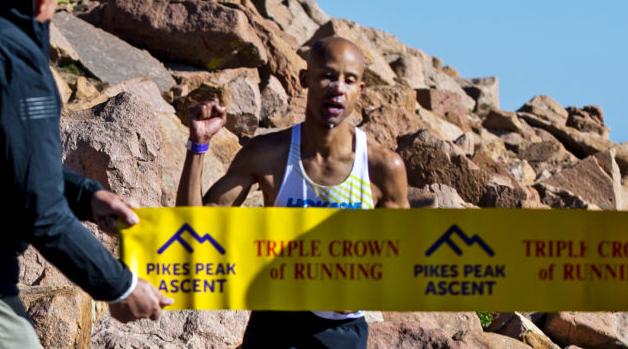 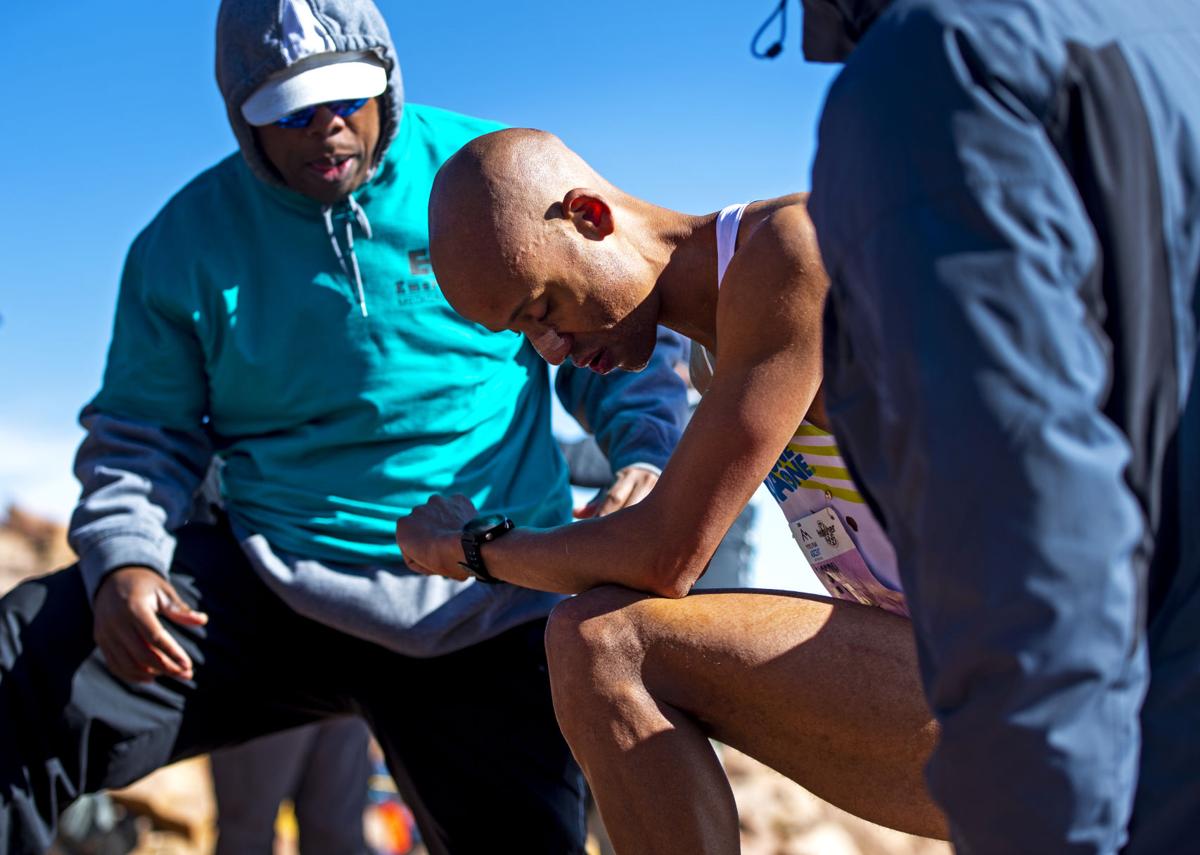 Returning champion Joseph Gray leans on his knee as he regains composure Saturday after crossing the finish line of the Pikes Peak Ascent. Gray also won in 2016 and 2017 before missing last year’s event to race in Europe. 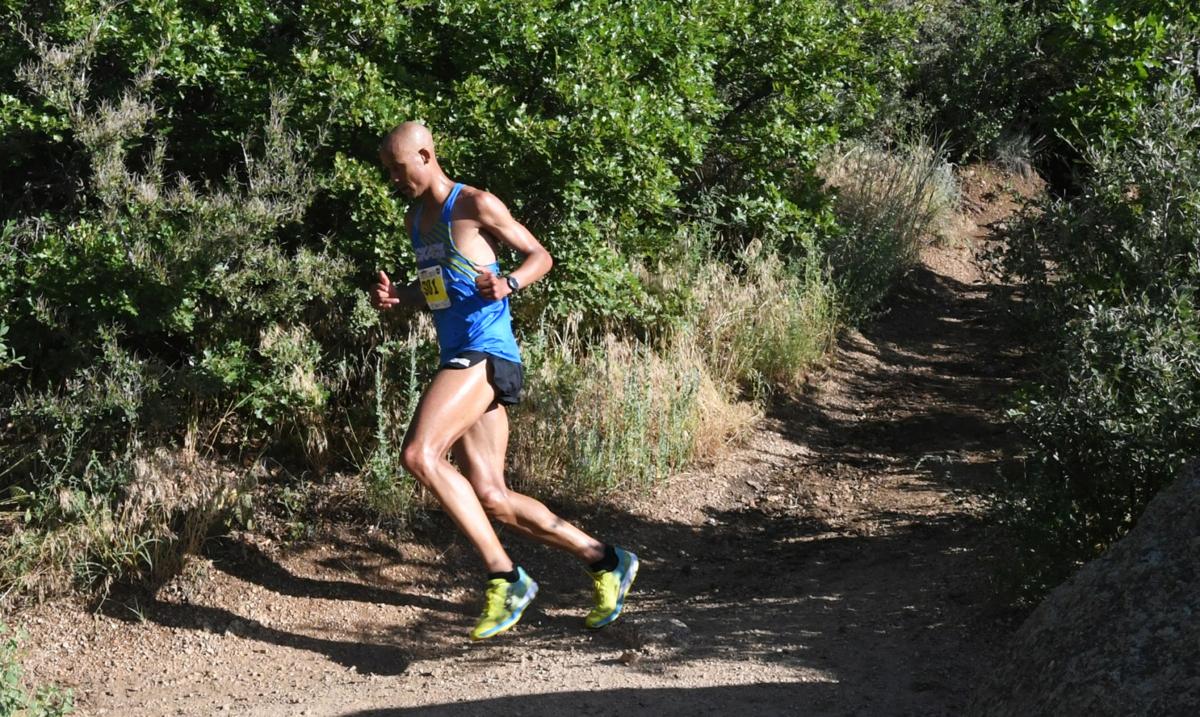 Joseph Gray finished first place for men with a time of 1:31.35 in the Barr Trail Mountain Race in July. The 12.6-mile race started at the Cog Railway to Barr Camp and back. 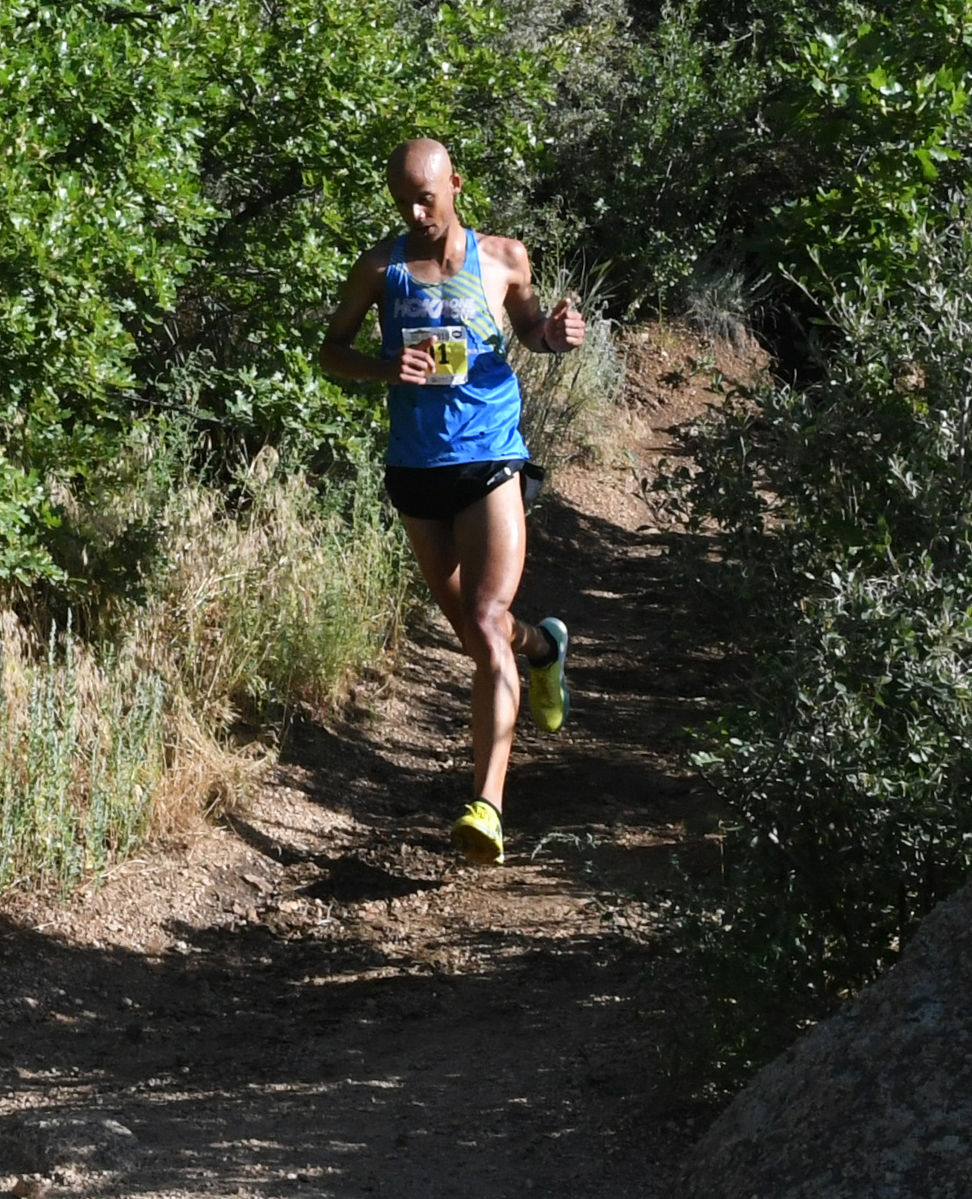 Returning champion Joseph Gray leans on his knee as he regains composure Saturday after crossing the finish line of the Pikes Peak Ascent. Gray also won in 2016 and 2017 before missing last year’s event to race in Europe.

Joseph Gray finished first place for men with a time of 1:31.35 in the Barr Trail Mountain Race in July. The 12.6-mile race started at the Cog Railway to Barr Camp and back.

“Obviously, my focus has shifted,” Gray said Saturday, the original Ascent date before the race was canceled due to the COVID-19 pandemic. “I have an addition to the family, so I’m just enjoying the family time and preparing for racing.”

Outside of fatherhood, Gray is also working to make trail running a more inclusive sport with his Project Inspire Diversity, something for which he’s uniquely qualified. He was the first Black American on Team USA’s mountain running squad and the first Black American to win the USA National Mountain Running Championships and the World Mountain Running Championships. He owns the fastest recorded ascent of the Manitou Incline, a blistering 17 minutes, 45 seconds.

Despite his success, Gray has experienced racism throughout his career. He feels like average Black runners don’t get the same press or sponsorships as white counterparts, which perpetuates the sport’s lack of diversity.

“You have to be great before you’re going to get the same opportunities in this sport. I hate to say that. It’s an ugly truth, but it is a truth, and we’ve seen it play out many times,” Gray said. “I’ve been in this sport a long time, and I’ve seen it happen many, many times, and it will continue to happen. I feel like that’s why I started to speak on it, because I knew me being a coward and not talking about my experiences or me not talking about this issue is only going to allow the issue to kind of keep growing and still exist.”

Gray has gone beyond speaking on the issue and paired with some of his sponsors to drop in on local athletes of color and provide them with gear and inspiration. One of Gray’s Instagram posts shows him with a young Black runner at Discovery Canyon High School holding a couple of Hoka One One shoe boxes and other supplements.

Seth DeMoor (@SethJamesDeMoor) is first to the summit in a little over 2 hours, 10 minutes. @CSGazetteSports pic.twitter.com/7x1h4HiMqc

“There’s this piece that there is no diversity, and I want to improve that. And the other part of it is I want to find these athletes of color and provide them with free products to keep them motivated and inspire them to continue their journey because someone gave me free stuff at one point in my early career, and I found that to be very beneficial moving forward just because it kept me motivated and I was so excited,” Gray said, remembering a gifted pair of $90 shoes .

“I just remember the impact that had on my journey. I want to have that same impact on these other kids and help me kind of push them to keep doing what they’re doing in the sport.”

Gray got an unfortunate reminder of racism’s ugly presence at the 2019 Ascent, which he won in 2 hours, 8 minutes and 59 seconds, nearly four minutes faster than the runner-up. After his third win in four years, Gray remembers hitting the streets of Manitou Springs for a cool-down run when a car rolled up and someone shouted the N-word at him.

“It did kind of ruin the day for me because it kind of became center stage for me for a while, and I hate that it was, but I just couldn’t shake how I felt about it after it happened,” Gray said.

Gray turned the hate to fuel and said he had two of his best races of the year in the following months. He was set to defend his throne atop Pikes Peak in 2020 until the pandemic hit.

“It would’ve been nice to just get another victory and keep the winners local,” he said.

With the World Mountain Running Championships and a trip to Lanzarote, Spain, still on the calendar for November, Gray won’t be toeing the line at 7 a.m. Sunday with other elites for the Pikes Peak Marathon, which will be run because the out-and-back, or up-and-down, nature of the race won’t result in groups of finishers gathering at the summit. He will be missed at America’s Mountain.

Gray can instead spend more time with his young family and plan Project Inspire Diversity’s next step.

“Next year, we’re hoping to put on a mountain running camp for Black youth in the community,” Gray said. “We hope that will be very impactful.”

Even in a year without the race that’s synonymous with his success, Gray found a way to take another step toward his goals.

Two familiar faces added to their Ascent win totals Saturday on a day where a windy finish slowed even the elite runners.