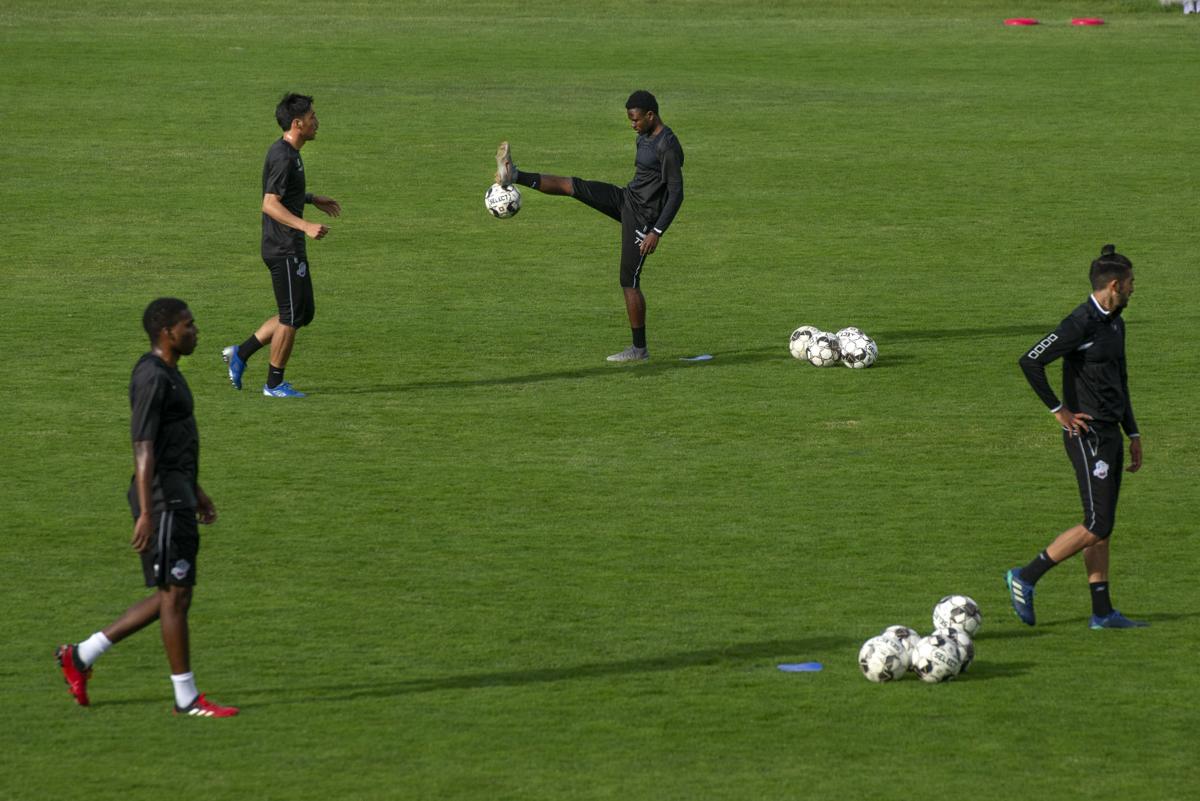 The Switchbacks practiced in groups of 10 on Wednesday, June 24, 2020 at Weidner Field in Colorado Springs, Colorado. (Photo by Katie Klann, The Gazette) 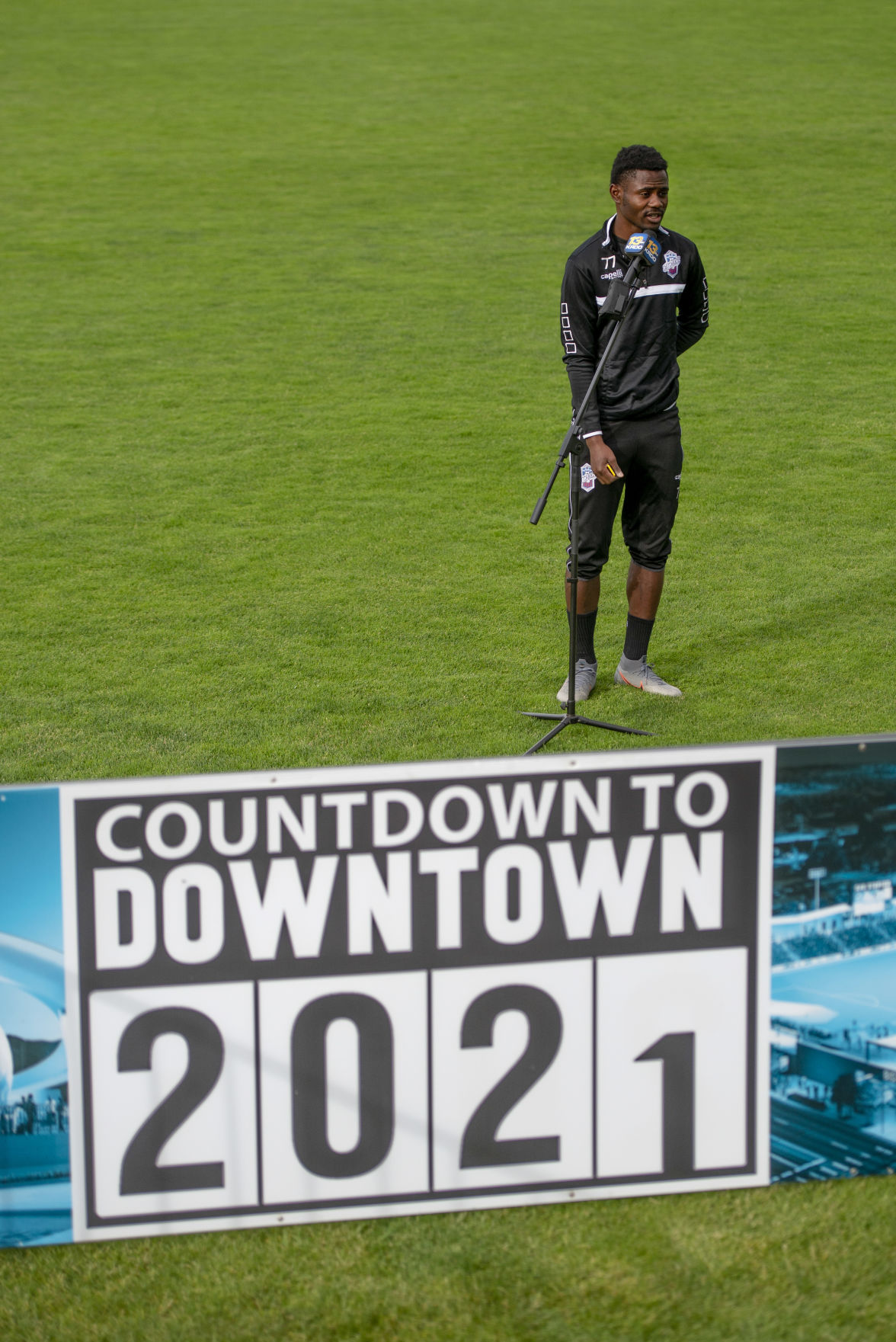 Andre Lewis, midfielder for the Switchbacks, talks with the press on Wednesday, June 24, 2020 at Weidner Field in Colorado Springs, Colorado. (Photo by Katie Klann, The Gazette)

The Switchbacks practiced in groups of 10 on Wednesday, June 24, 2020 at Weidner Field in Colorado Springs, Colorado. (Photo by Katie Klann, The Gazette)

Andre Lewis, midfielder for the Switchbacks, talks with the press on Wednesday, June 24, 2020 at Weidner Field in Colorado Springs, Colorado. (Photo by Katie Klann, The Gazette)

Switchbacks FC jumped to the top of its group as soon as the United Soccer League announced pairings for its modified season Thursday.

With the USL Championship season suspended roughly four months due to the coronavirus pandemic, the league announced a new format Wednesday that will divide the league’s 35 teams into eight regionalized groups of four or five teams with the top two teams from each group advancing to the playoffs.

Thursday, the Colorado Springs club found out it will be grouped with New Mexico United, El Paso Locomotive and Real Monarchs. Since the Switchbacks won their opener at Oklahoma City back in March, while El Paso earned a draw and New Mexico and Real Monarchs lost, the Switchbacks will top the group when play resumes, hopefully July 11th. It’s a relief to coach Alan Koch, who was a little concerned the result would be wiped out.

“There was some concern to be brutally honest because everything was on the table,” Koch said Wednesday. “They were looking at all these different permutations in terms of how things were going to transpire.”

Now that the club knows most of its travel destinations — intergroup games are expected to make up 12 of the Switchbacks’ 15 remaining regular-season matches — it’s time to figure out how they will get there. According to The Athletic, league protocols mandate any trip shorter than 500 miles must be taken via bus. The Switchbacks' only trip that short is to New Mexico.

“For us in Colorado Springs, it’s pretty unique because there’s nobody very close to us,” Koch said.

“For us, when the schedule does come out, we’re going to be very busy trying to figure out what’s the best way to get to these different places.”

Though it’s not the season most hoped for, there is a potential positive, an increased rivalry between teams in the same group as the expected four games against each group opponent doubles the previous number of regular-season meetings.

“That’s going to obviously create something,” goalkeeper Abraham Rodriguez said. “But we’re going to go out there and compete like we always do.”

To some fans, Oklahoma City was the club’s first rival thanks in part to a 2015 playoff meeting, but the Energy have a natural in-state feud with Tulsa. Matches against New Mexico, Real Salt Lake and Phoenix Rising have taken on a little more importance among fans as supporters groups representing each club created the Four Corners Cup ahead of the 2019 season. A match against Phoenix remains a possibility as it is one of the closer teams that is not in Group C, something that would make midfielder Andre Lewis happy.

“I did want to play against Phoenix because they are the giant in the league, and as I said I like pressure, I like big games. Big games is what I’m known for back home,” Lewis said. “I heard they’re not going to be in the group, but whoever we play, we’re going to try our best to be a rival.”

The Switchbacks' group should feature no shortage of competition. New Mexico, El Paso and Real Monarchs all qualified for the 2019 postseason, which was won by Real Monarchs, in addition to being regional foes.

“I think those rivalries will truly be accentuated this year, and it’ll carry over to future years,” Koch said. “I think that’s probably going to be a positive byproduct of how we go play regionally. You’re going to go against play teams that are close, and it’s going to give people the opportunity to develop that kind of rivalry."

Switchbacks continue to train in waves

Though the USL announced teams would be able to return to full-side training as soon as Wednesday, the Switchbacks continued to train in smaller groups through Thursday, as the club waits for its coronavirus test results.

The Switchbacks trained in waves of 10 or fewer players Wednesday and Thursday but hope to quickly get to full-side training with potential matches just a few weeks away. Midfielder Andre Lewis said he needs physical training sessions to feel ready for the season to resume.

Coach Alan Koch said that really goes for the whole team after weeks of no-contact practices.

“To go into four-man workouts, there’s (only) so much you can do. The 10-man, we’ve been able to progress a little bit, try to work on a little bit more than just technique and conditioning, because those are the two main things you can work on when you’re in these groups, but it’s very artificial,” Koch said. “We’ve got players trying to work at a certain level of intensity, and it’s not the same. When you’re being kicked and pulled and scratched, that’s the reality of this game.”