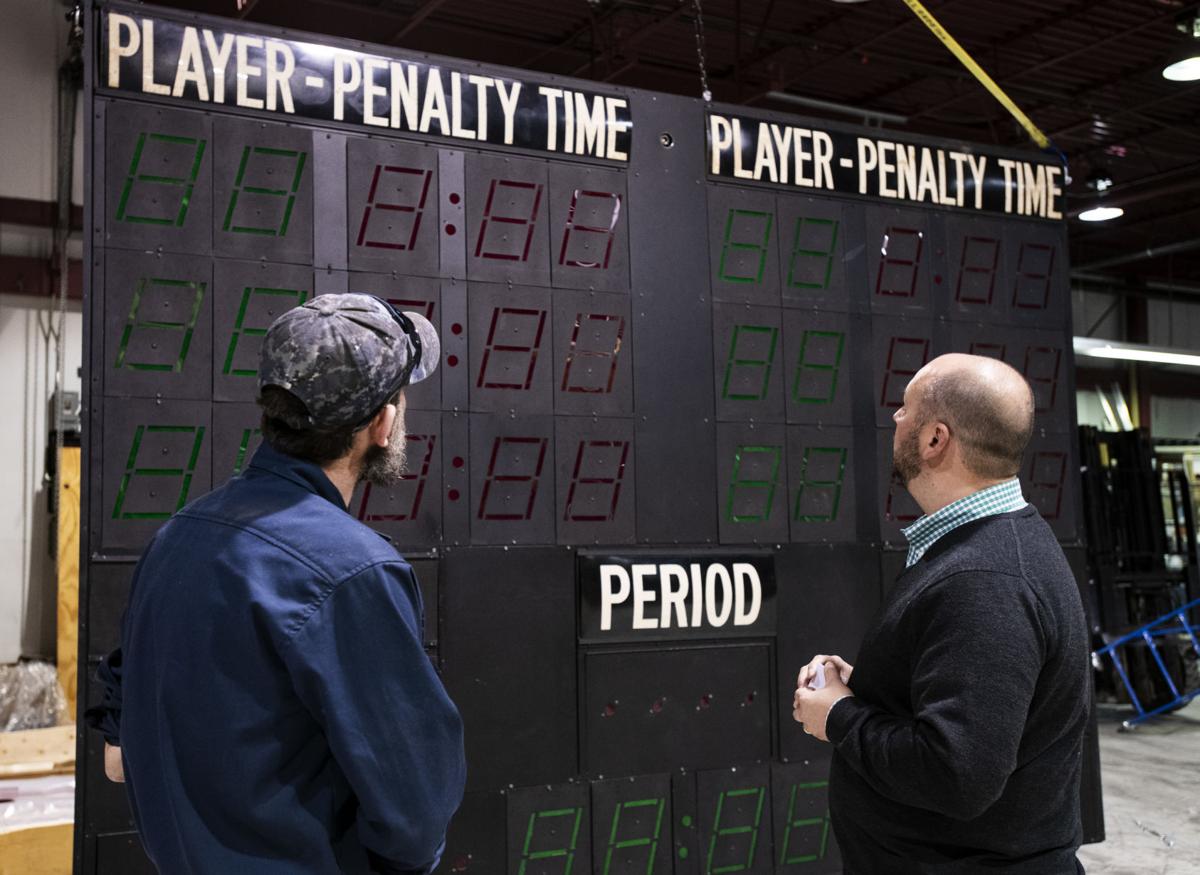 Chris Capps, left, and Peter Maiurro look up at the “Miracle on Ice” scoreboard in Colorado Springs on April 16, 2019.

The scoreboard has been in Lake Placid for almost 40 forty years, since the U.S.A hockey team defeated the Soviet Union during the 1980 Winter Games. The scoreboard will become a fixture in the new U.S. Olympic and Paralympic Museum. 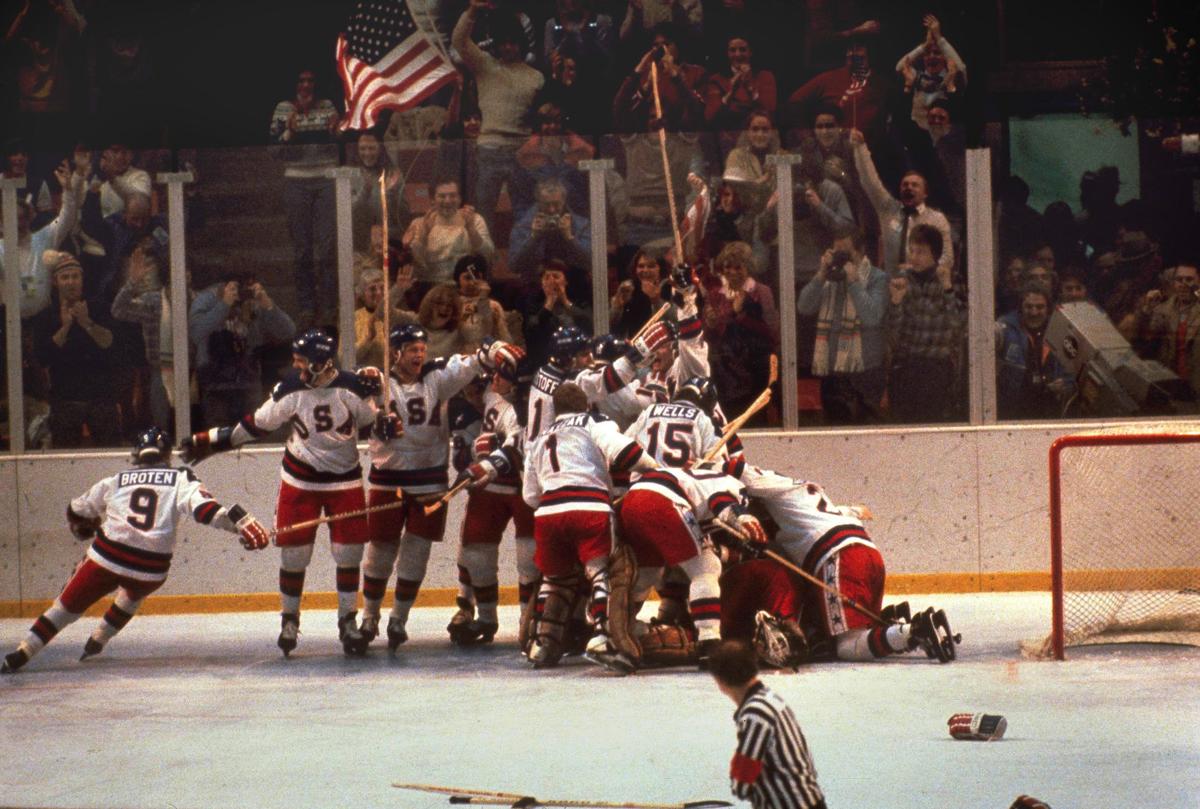 The U.S. hockey team pounces on goalie Jim Craig after a 4-3 victory against the Soviets in the 1980 Olympics on Feb. 22, 1980. It’s been four decades since his landmark goal area became the centerpiece of the U.S. Olympic hockey team’s Miracle on Ice celebration. 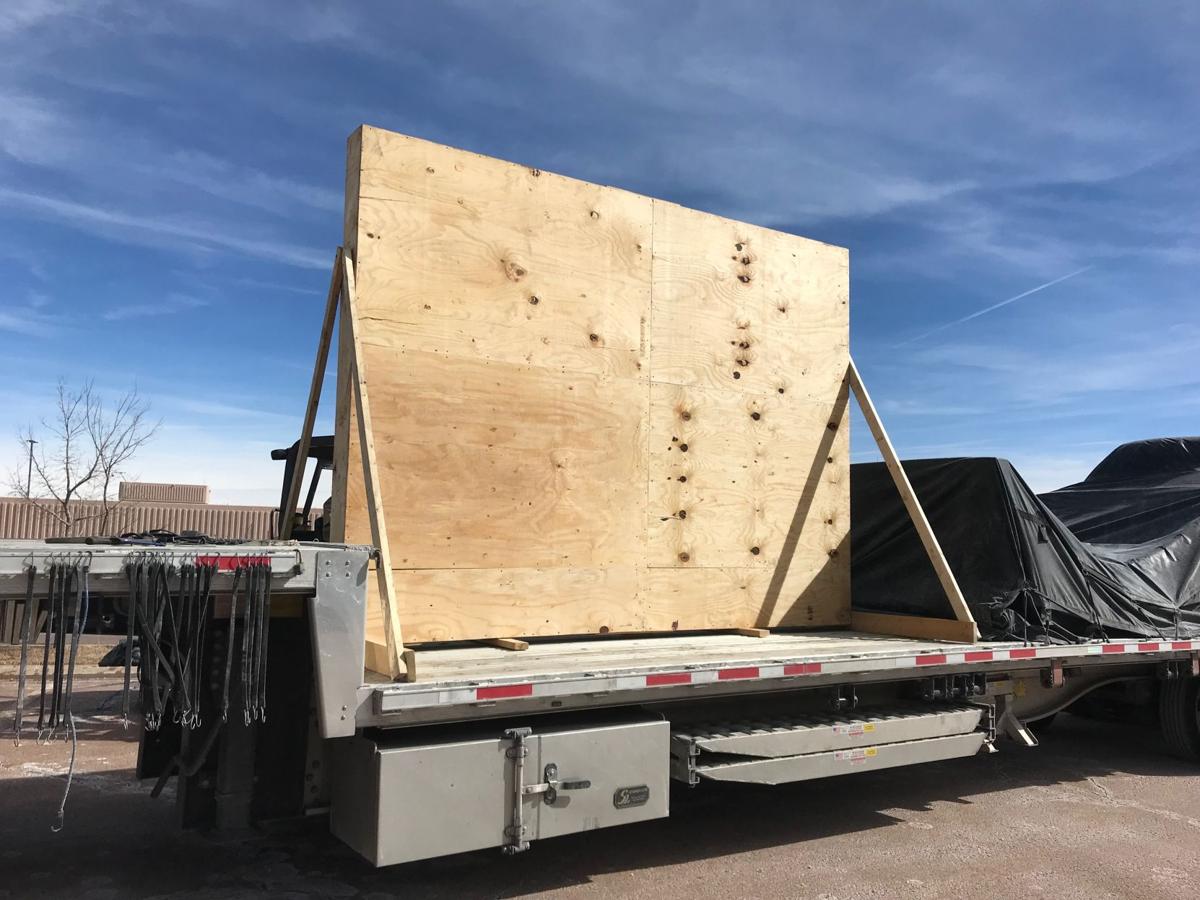 Chris Capps, left, and Peter Maiurro look up at the “Miracle on Ice” scoreboard in Colorado Springs on April 16, 2019.

The scoreboard has been in Lake Placid for almost 40 forty years, since the U.S.A hockey team defeated the Soviet Union during the 1980 Winter Games. The scoreboard will become a fixture in the new U.S. Olympic and Paralympic Museum.

The U.S. hockey team pounces on goalie Jim Craig after a 4-3 victory against the Soviets in the 1980 Olympics on Feb. 22, 1980. It’s been four decades since his landmark goal area became the centerpiece of the U.S. Olympic hockey team’s Miracle on Ice celebration.

The moment lingers. The United States Olympic hockey team had somehow beaten the unbeatable Soviet Union and broadcaster Al Michaels was asking, in a glorious shout, “Do you believe in miracles?” and across America women and men were struggling to answer yes.

United States 4, Soviet Union 3. An improbable score from the 1980 Winter Olympics that retains its ability to thrill and inspire.

After a long journey, a section of the scoreboard has arrived in Colorado Springs. On the west side of the U.S. Olympic and Paralympic Museum on the edge of downtown, the scoreboard dominates a big room.

Throngs of museum visitors soon will be stopping here for selfies. Count on that.

The journey began in late 2017 when New York state announced a $100 million modernization of Lake Placid Olympic Center, where the “Miracle on Ice” somehow happened. The renovation swept the past from the arena, home of Olympic competition in 1932 and 1980. This sweeping meant a new scoreboard.

Dave Ogrean, a resident of Colorado Springs, immediately reached out to friends in upstate New York. He asked Denny Allen, longtime manager of Lake Placid’s ice arena, to save one of the scoreboard’s four sections for the Olympic Museum. Ogrean, retired executive director of USA Hockey, was working at the arena the night the United States toppled the Soviets, who had won five of the last six gold medals and would win the next three.

Leaders of the Lake Placid Olympic Center agreed to donate the section to the Olympic museum.

Next, Ogrean pursued funds for the complicated move from Lake Placid to Colorado Springs. He asked Bill Hybl of El Pomar Foundation to donate the money required to move the scoreboard.

Hybl quickly arranged the donation. He clearly remembers the night of Feb. 22, 1980, which he spent in his car listening to a radio broadcast of the victory.

“We were on our way to go somewhere,” Hybl says, “and I was certainly excited like everybody else. This was an upset of upsets and a great feeling for all of us.”

A special crate was constructed to protect the scoreboard panel, and a truck was secured to drive from Lake Placid to the Olympic Museum. The cost was $6,000.

The museum, still under construction, did not have a place for the scoreboard when it arrived in January 2019. The scoreboard was placed in storage at the Space Foundation.

Technicians worked to preserve and update the scoreboard. When the section arrived, it retained its original lighting and electronic hardware. During the restoration, the original acrylic and metal panels on the surface were kept intact, but the insides were brought into 2020 with original 1978-79 lights replaced by state-of-the-art LED lights.

Peter Maiurro works as chief communications and business affairs officer for the museum, and he oversaw much of the detail of the scoreboard’s move and restoration.

“It was a moment in America’s history when people really rallied around a group of underdogs,” he says. “At the height of the Cold War, beating the Soviet hockey team was such a powerful geopolitical moment. It was a moment to rally against what so many people thought was a global enemy.”

The victory was so unlikely. On Feb. 9, 1980, the Soviets trampled the United States, 10-3, in an exhibition at New York’s Madison Square Garden and after the game Soviet coach Viklor Tikhonov shrugged off the victory, calling it a “practice game.” When a reporter asked if the Soviets had not bothered to give their best effort, Tikhonov smiled and answered, “You are quite correct.”

In the Olympic lead-in to The Miracle, the Soviets destroyed Japan, the Netherlands and Poland by a combined 41-5.

But the Americans shocked the hockey world, and maybe themselves, with a miracle comeback victory in the tournament semifinals. Two nights later, the Americans edged Finland, 4-2, for gold while the Soviets crushed Sweden, 9-2 for the silver. Many of the Soviets didn’t bother to bring their silver medals home, choosing to toss them in the trash or the lake.

On Jan. 7, 2020, the scoreboard that recognizes The Miracle was installed on the top floor of the Olympic museum. A crane was used to carefully put the scoreboard through an opening on the west face of the museum.

Ogrean, who first imagined the scoreboard in Colorado Springs, enjoys seeing the reaction of those who examine that 4-3 score in lights. He knows thousands soon will be looking at the scoreboard in a freshly opened museum on the northwest edge of downtown.

“It’s from the most iconic sporting event in my life,” he says. “I see on their faces the impact it had on their lives. It’s the reaction that I observe from everyone else who sees it, and I’m reminded of how big this was.”

Yes, it was big then.

And it’s a rare sports moment that remains forever big.

- Tickets to the U.S. Olympic and Paralympic Museum, located at 200 S. Sierra Madre St. in Colorado Springs, are available at usopm.org.

- Guests are strongly encouraged to purchase tickets online in advance. Admission is timed to maintain social distancing in the museum.

A look inside the U.S. Olympic & Paralympic Museum during a soft launch for media on Tuesday. The museum will open to the public on Thursd…