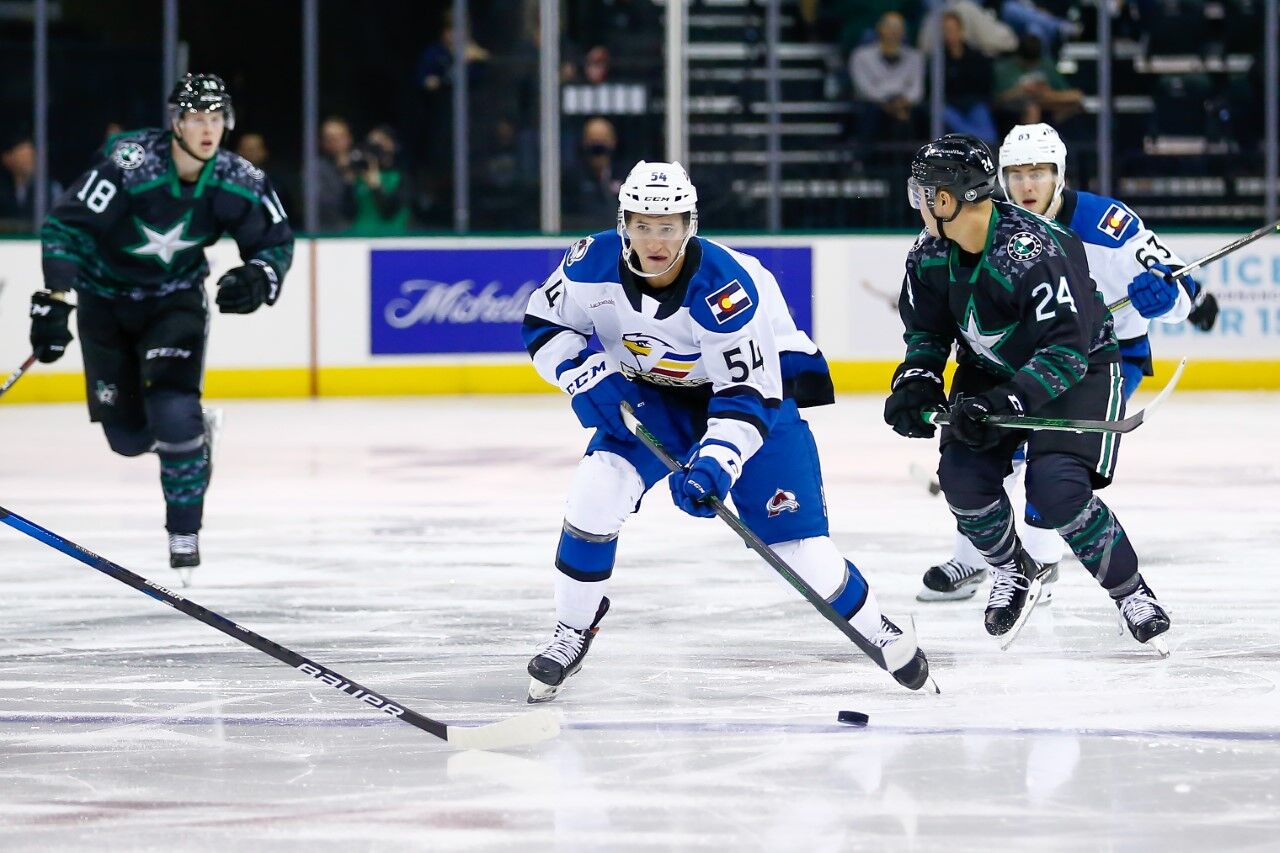 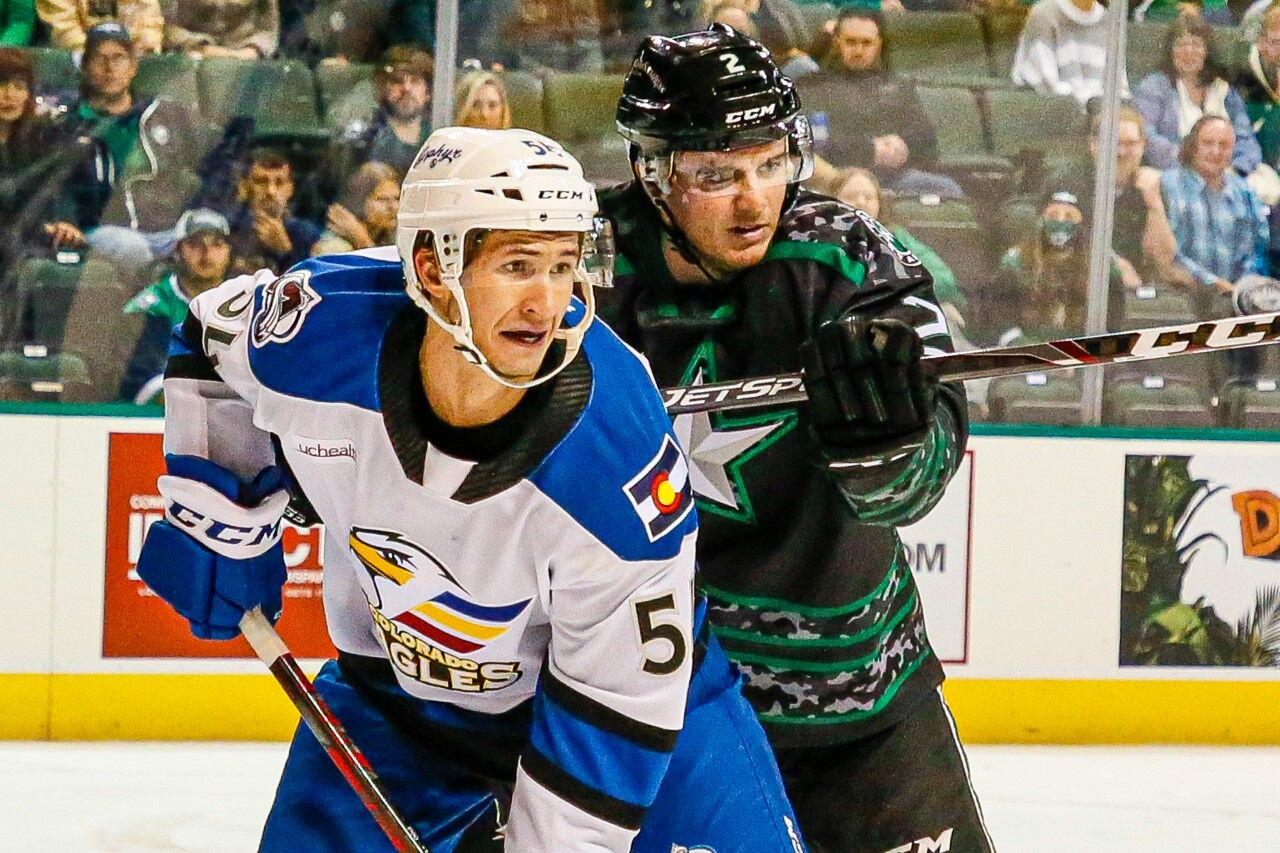 If Trey Bradley runs out of clean shirts, that’s a great sign.

The four-year Colorado College hockey player earned his first call-up to the Colorado Eagles of the American Hockey League on Nov. 9. He brought a carry-on and a backpack. His car, TV, even the Xbox are back in Utah, where he spent the previous season with the Grizzlies (ECHL).

He’s on an AHL two-way contract and playing one level below the NHL in Loveland. Sticking around long enough to do laundry many times over is the goal.

“It’s just nice to see your career moving forward again after a couple of years of it being in the same spot,” Bradley, 25, said.

He had several scoring chances and earned an assist in his first Eagles game. He now has three helpers in four games and is plus-1.

“I just told myself, I don’t know how long I’m going to be up here. I was just going to try and be the hardest worker on the ice,” Bradley said. “Have the details and the habits of my game be the best on the ice as well.”

Bradley followed father Brian, the Tampa Bay Lightning’s first All-Star, into hockey and brother Cody to Colorado College. There he totaled 31 goals and 56 assists in 120 games. He moved the Tigers’ offense his last two seasons and led the team in goals (15) and points (34) as a senior.

There the Tampa, Fla. native was climbing out of windows to get some fresh air after days of being trapped inside by 25-foot snow drifts. And the job, of course — 14 goals with 20 assists in 48 games. He was hoping for a late-season call-up but it didn't come.

“I think that just playing there for a year definitely helped me develop a lot,” Bradley said. “I think I needed some time to adjust to professional hockey. It’s just a little different than college.”

Five-foot-11, 158-pound Bradley said he’s learned to use his speed, so useful in going end-to-end during his CC days, in other ways.

“He’s not a big kid, so he had to really learn how to put himself in situations where he wouldn’t have to use his physical strength to win a battle,” Eagles assistant coach Tim Branham said. “It's more use his skill, use his speed, be on the defensive side of pucks."

Bradley said his coaches told him they were pushing for a two-way contract. He got lucky when Branham moved up. After eight years as head coach and general manager of the Grizzlies, Branham was named to the Eagles’ staff on Sept. 13.

“I can tell the other coaches what I know of him, what his strengths are. We can put him in situations to be successful. But at the end of the day, the player has to do something with it. He's definitely doing that.”

Back in Colorado, Bradley made it to CC’s exhibition game against Air Force and was blown away. When he says brand-new Ed Robson Arena is nicer than many pro facilities beneath the NHL level, he’d know.

“Just walking up those stairs and you take a left and the whole rink’s done and fans are in there — it was really cool,” Bradley said. “It kind of made me upset in that I wish I was born five years later so I could have experienced it.”

The start of the ECHL season arrived. While he never even wore an ‘A’ in college, he was named the Grizzlies’ captain, something of a surprise. He had a goal and 10 assists through the first eight games.

Then the Avalanche lost several forwards to injury and set the wheels in motion.

“When you are on two-way contract you definitely watch closely to how the Avalanche are doing, because it all trickles down,” Bradley said. “You're definitely more attentive to how the ladder’s moving.”

Bradley is playing alongside former college guys like Shane Bowers and Sampo Ranta as well as players who have seen significant NHL action, like Jacob MacDonald and Dylan Sikura.

“When I first got here, I was just kind of like, ‘How am I going to hold up against them?’ Now that I've been here a week and a bit, they’re just normal guys,” Bradley said. “Obviously they’re very talented on the ice.

Even as the last line of defense was having a string of highly unusual technical difficulties, the Colorado Avalanche blue line held up and th…