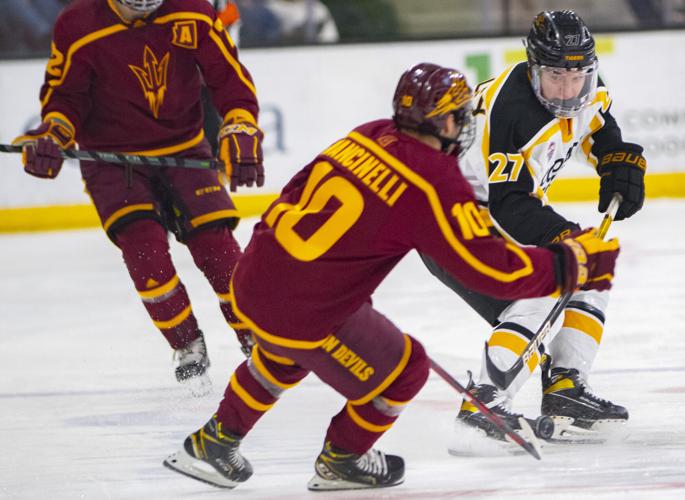 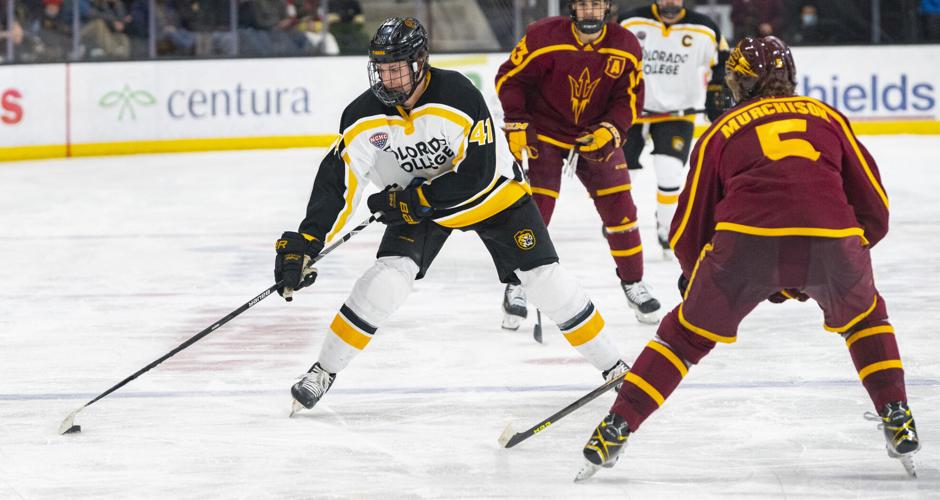 Brian Hawkinson positioned himself in front of ASU’s goalie, Ben Kraws, ready for the pass. When it came, the senior connected stick to puck, and turned around to see what happened.

The CC student section saw a goal, and erupted in cheers. Arizona State saw a miss. And the officials weren’t quite sure, so they went to the monitor.

The replay left no doubt: The puck slid nearly parallel to the goal line, in front of the net. Then, at the last possible second, it crossed. Barely, but it was enough.

And no matter how close, a goal was what the Tigers desperately needed after giving up a turnover score to open the game, for the second night in a row.

It was also the second time they gave up a shorthanded goal. But unlike Friday’s game, this time the Tigers recovered, and secured a 4-2 win, Saturday at Ed Robson Arena.

With barely a minute gone by, CC went on a power play as Sean Dhooghe was called for tripping. The teams met for a faceoff, and CC immediately lost possession. What followed was Colin Theisen skating for a one-on-one with Dominic Basse in the net. Theisen finished the goal, giving ASU the early lead.

But CC responded, something Mannino emphasized after Friday’s loss. He was at the helm for the second time, as coach Kris Mayotte traveled to Detroit as an assistant coach for Team USA at the 2022 International Ice Hockey Federation World Junior Championships.

Theisen's goal was nearly identical to the one Ty Murchison scored to open Friday's contest.

"We went over that this morning, and obviously we didn't want it to happen again," Hunter McKown said. "But it did, and we knew how to respond."

Hawkinson’s goal turned out to be more than an equalizer. It changed to momentum.

The next two scores came off the sticks of Tigers, and CC took a 3-1 lead with 4:14 gone by in the second.

Tyler Coffey was responsible for the first. The sophomore skated with the puck past the blue line where two ASU defenders where waiting. Neither applied pressure, allowing Coffey to thread a shot between them, that sailed into the net.

Just a minute later, McKown skated up the right side of the ice, launching a powerful shot past Kraws.

"The puck kind of hit the stanchion, and took a fortunate bounce," McKown said of his goal. "I was able to get in on that two-on-one, and I saw a little bit of net on that far side and let it go."

ASU’s Benji Eckerle cut the CC lead down to 3-2 with 7:04 left in the second period. CC was able to retain its lead going into the intermission. The Tigers even staved off a five-minute power play from ASU after Tommy Middleton went airborne, launching himself into Jacob Wilson, who went headfirst into the boards. The play resulted in a scuffle behind the net, and after a review, Middleton was assessed a major.

"We trusted our preparation," Mannino said of how the team killed the penalty. "We practice those moments. We've been looking to get into those moments and to have success is outstanding. We feel good about that. We know we can do it and get those winning results."

ASU couldn’t get the equalizer, and CC was able to secure a victory with 1:41 left as the Sun Devils pulled their goalie.

Stanley Cooley recorded the goal, as he chased down a puck, and off-balance, sent a shot toward the net. Cooley was taken down in the process, and his stick slid after the puck into the net, as he crashed into the boards.

The Tigers don’t play again until Jan. 7, when they head to Miami for an NCHC matchup.

Colorado College drops second game to No. 7 North Dakota, keeps it close until empty net goals at the end