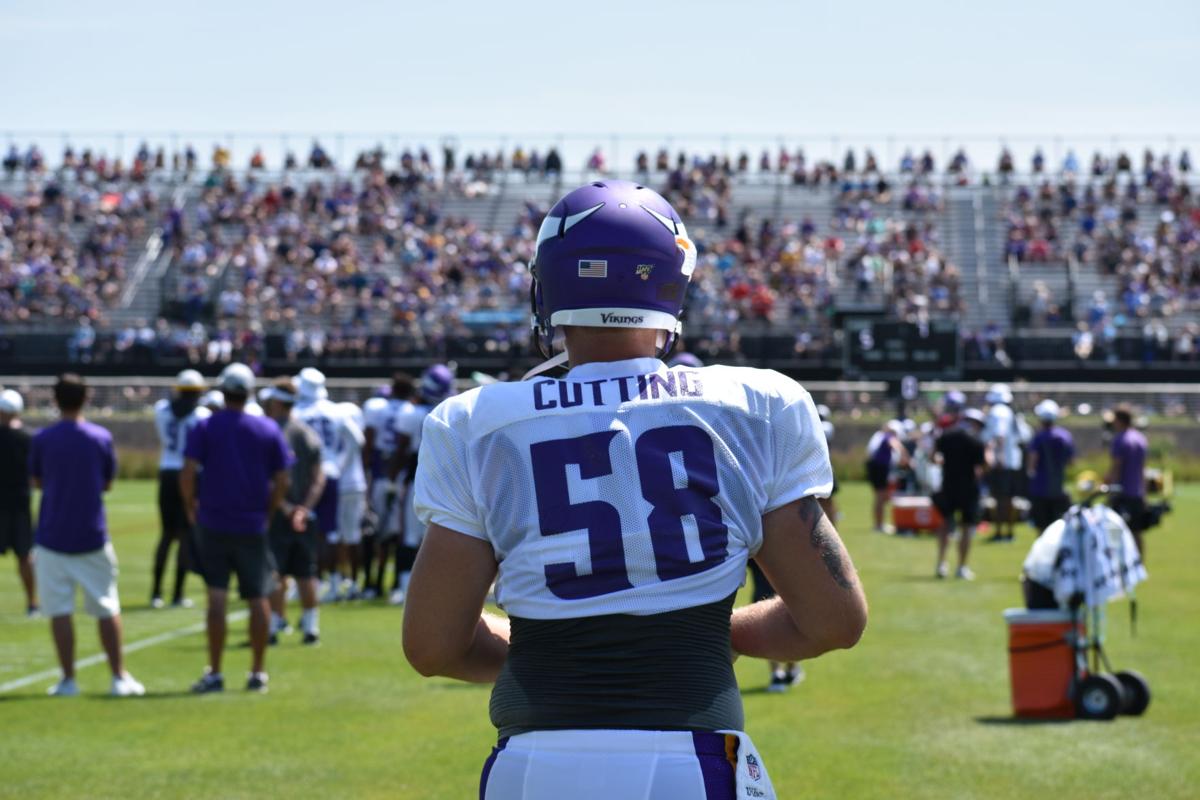 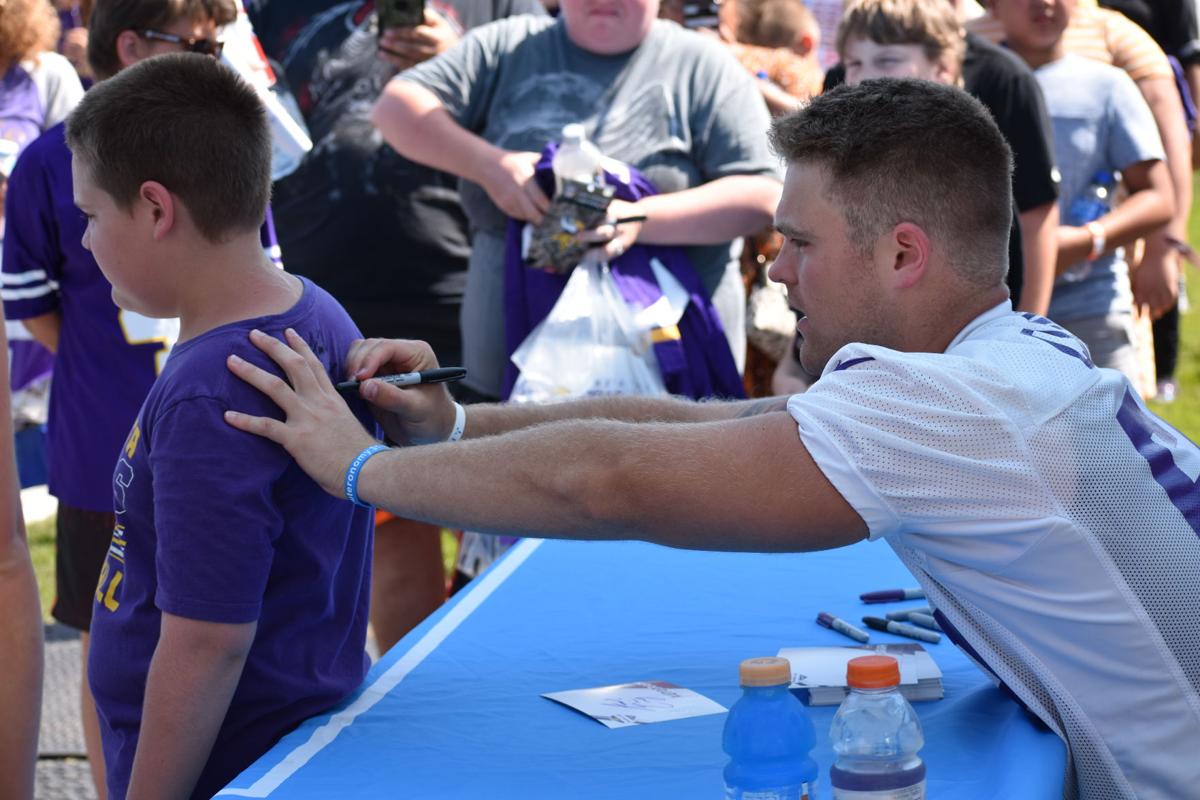 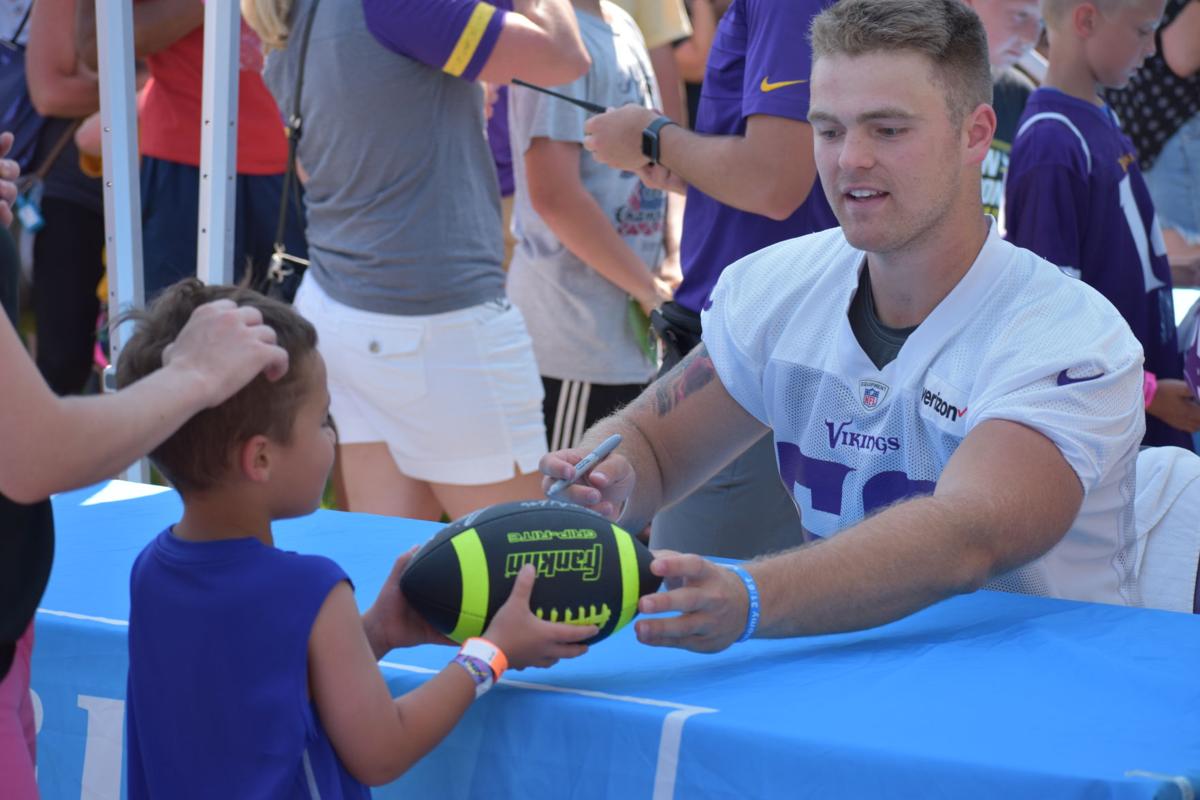 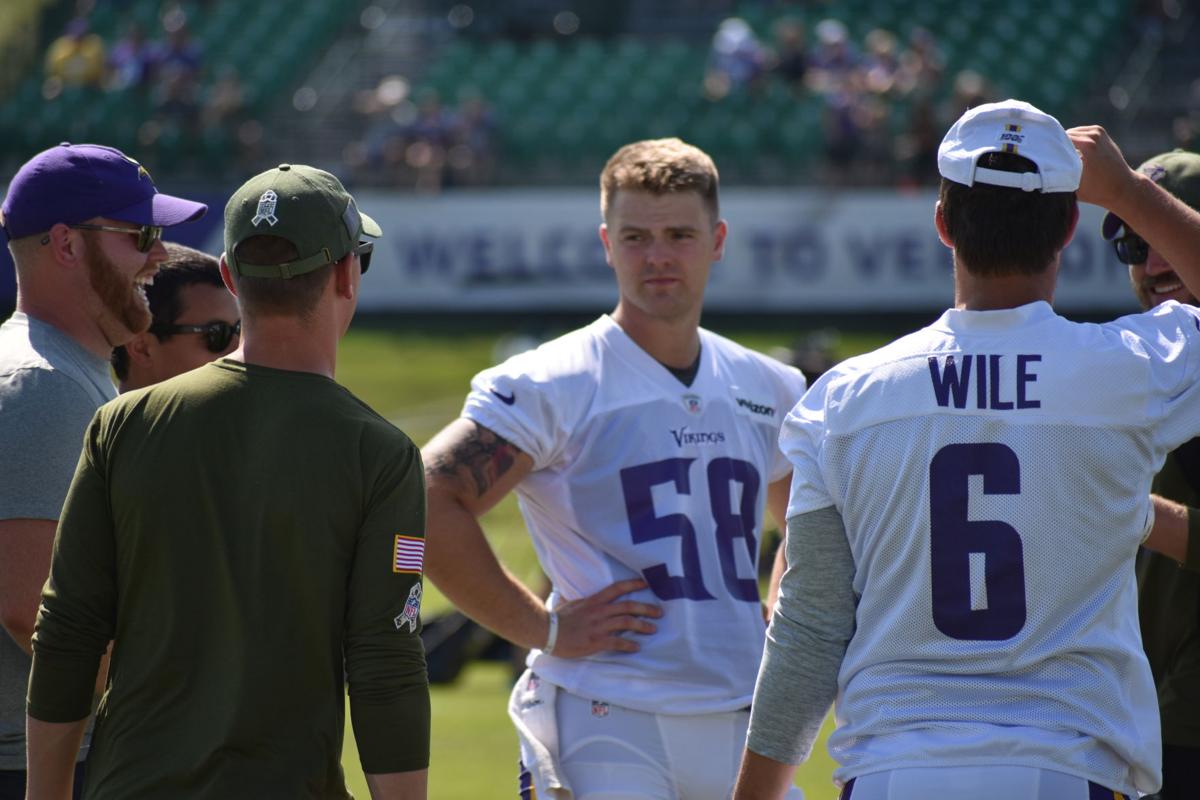 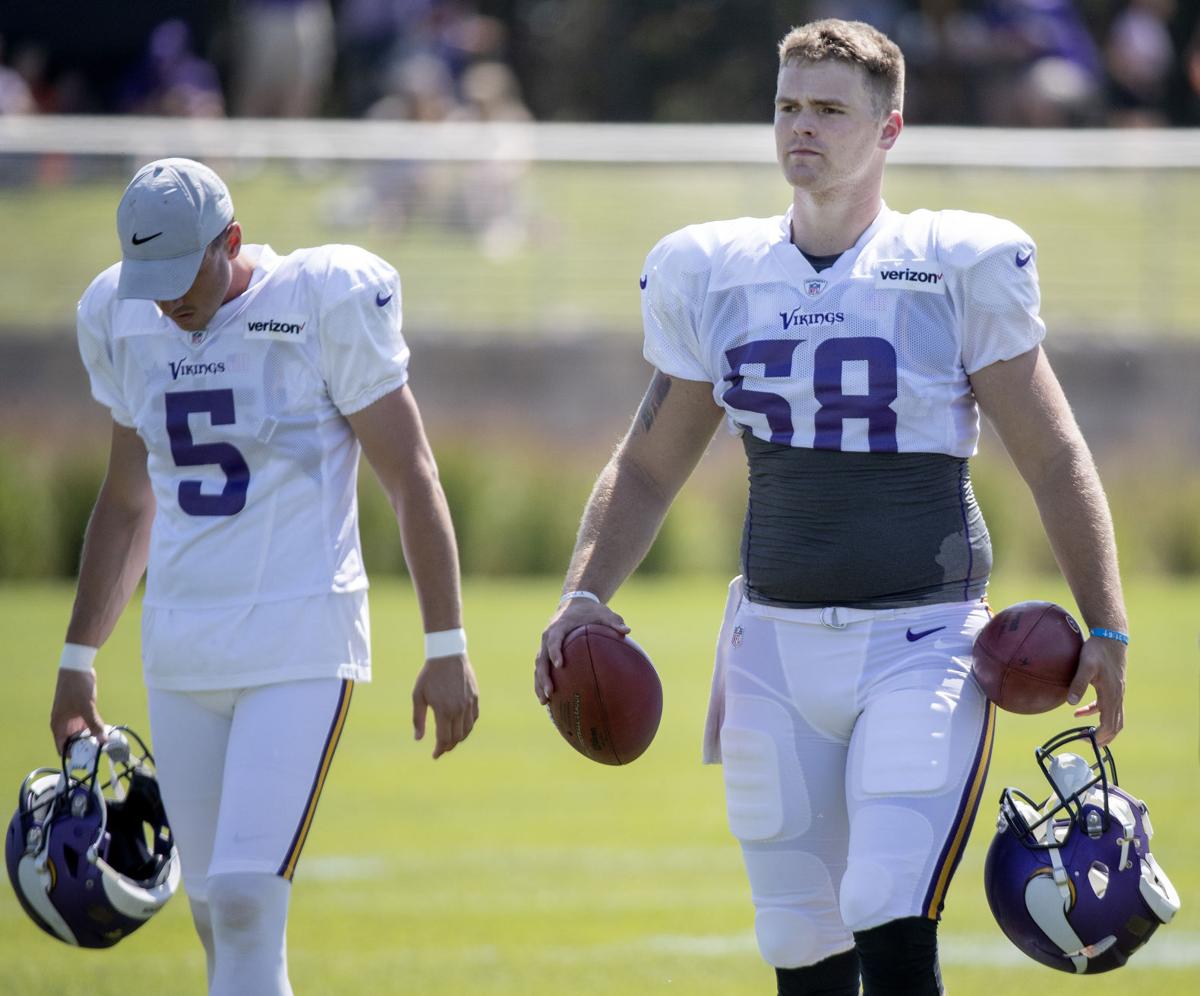 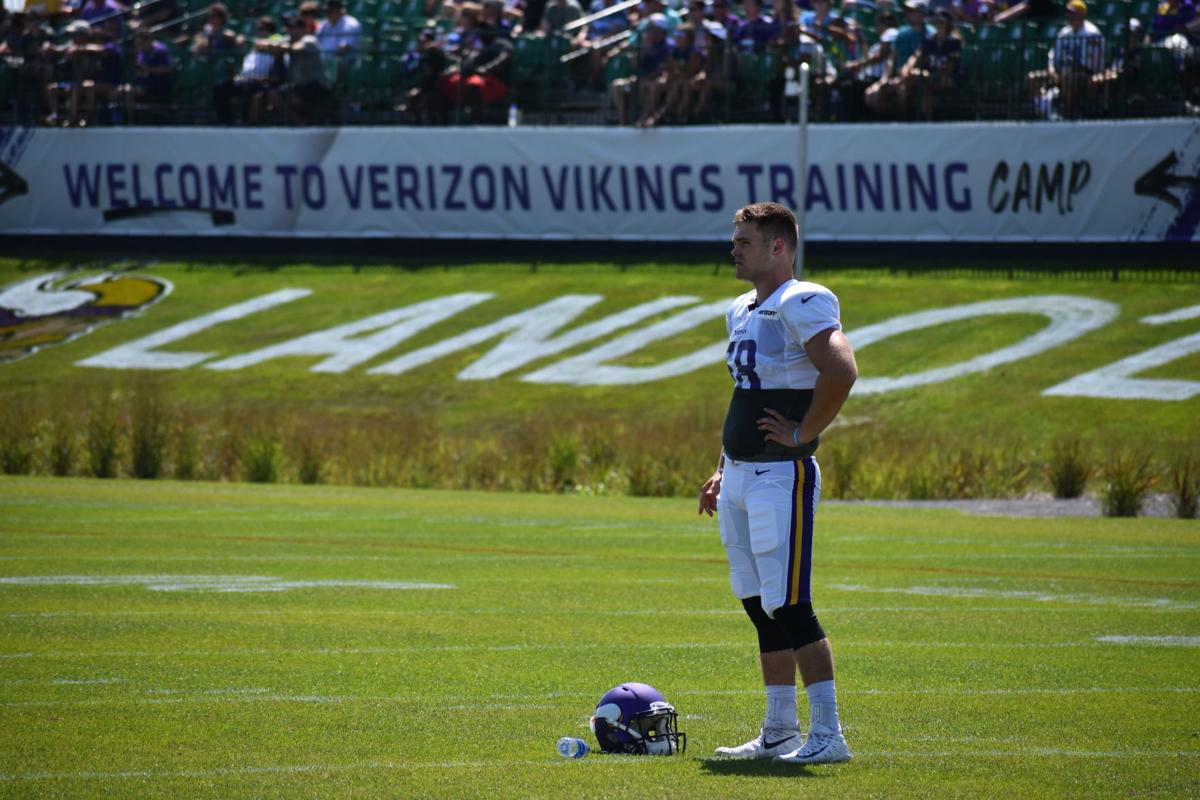 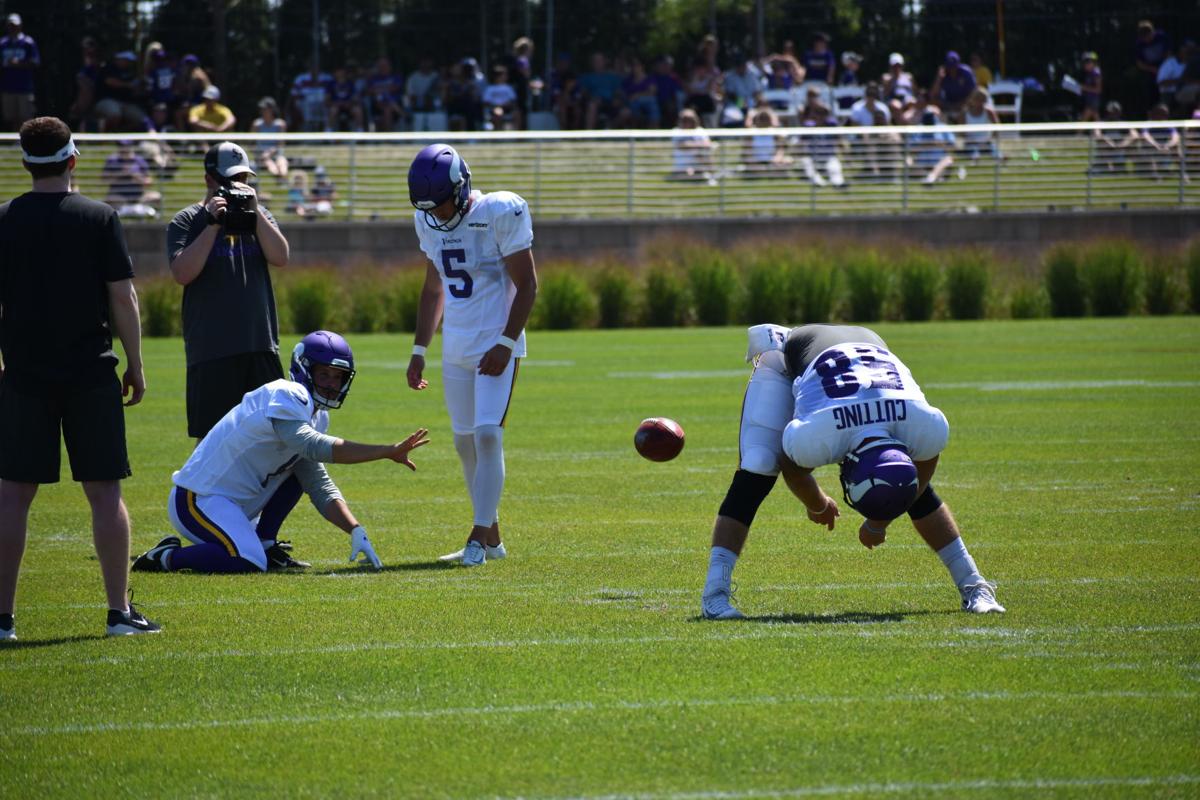 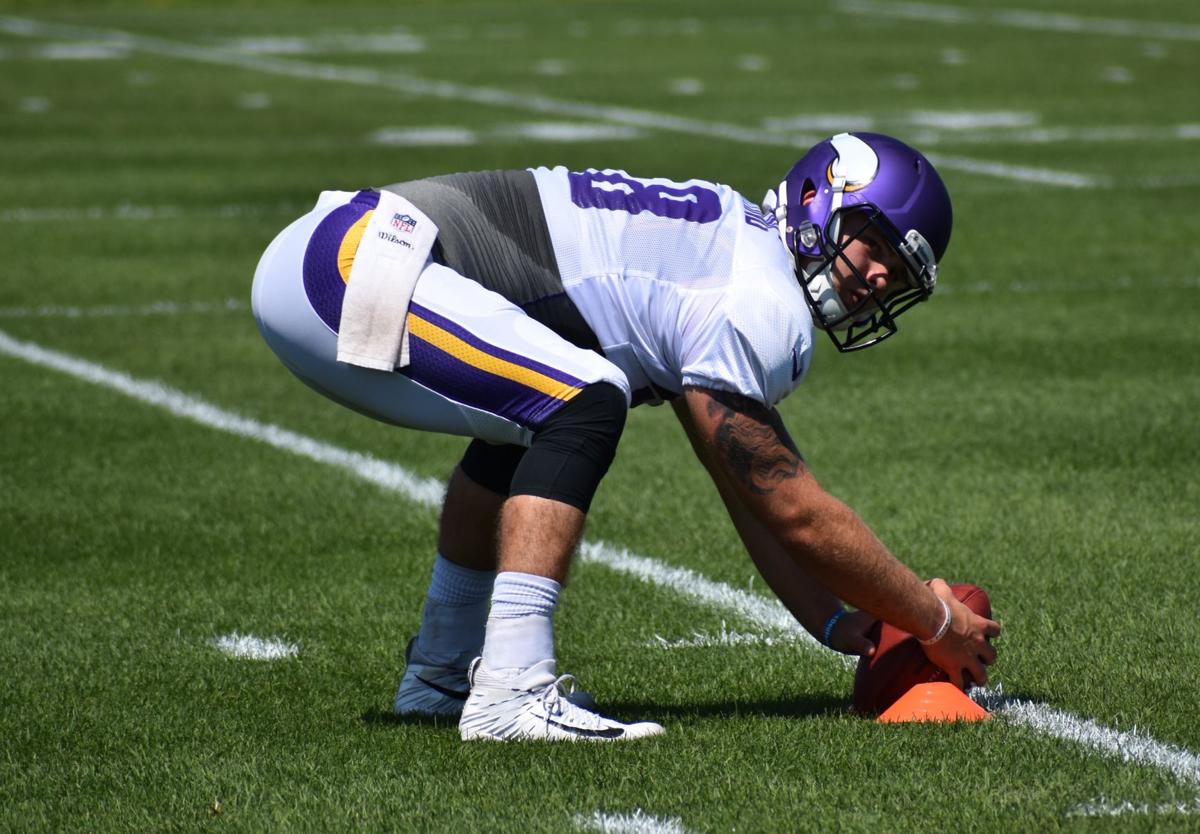 MINNEAPOLIS • Amid the excitement of a potentially trailblazing situation, Austin Cutting issued a warning to his mother.

The long snapper who graduated from the Air Force Academy in May is one position battle away from earning an NFL roster spot with the Minnesota Vikings while serving on active duty. He would be the first from Air Force to do that. Others, like Chad Hennings and Ben Garland, have played in the NFL, but only after being released from active duty to serve on Reserves.

Cutting will be officially stationed at the academy, but will be allowed to play in Minnesota (or with any other NFL team) and serve as a recruiter.

With that, he knows, will come criticism and scrutiny. The government, after all, paid for his education. Not everyone will find the return on that investment to be adequate.

Cutting felt his mother needed to brace for that.

“You’re going to see some stuff on social media that’s not good,” Lisa Cutting was cautioned. “Mom, don’t pay attention to it.”

She’s not worried. She knows her son.

All eyes at Mountain West Media Days shot in the direction of Troy Calhoun.

The Air Force coach had been asked about Austin Cutting, and within moments the typically buttoned-up Calhoun had jumped to the side of his table and was squatting in the position of a long snapper.

Nothing excites Calhoun quite like talking about a player’s work ethic, and he positively lit up when discussing Cutting.

It wasn’t enough for Calhoun to explain the long hours of individual video study Cutting had logged in the Falcons football offices, so he jumped to the side of his table to crouch down and demonstrate the subtleties Cutting was mastering.

“If it’s possible to be a self-made person as a player, he’s that,” Falcons coach Troy Calhoun said. “There’s no way a person could be more committed to a craft than Austin Cutting has to his development as a deep snapper. I promise you nobody’s snapped more balls and nobody’s watched more film.”

“He’s always been real focused,” said Lisa of Austin, the youngest of her three sons. “If there was something he wanted, he would find a way to get it.”

She remembers when he was a child and wanted a particular mini-bike, and he wouldn’t let the topic die until one appeared under the Christmas tree. When he reached high school, and the focus turned to sports, he avoided parties and kept his friends to a small, tight circle to sidestep the perils that could derail his athletic path. He worked out with enough gusto that he began competing in powerlifting meets and setting school records in the weight room.

When he realized long snapping would provide his ticket to college athletics, he honed in on that. He attended camps. He’d use pool time to toss the ball overhead with perfect form to anyone willing to catch it. Once he was at the academy he hired a personal snapping coach from Special Teams U in Wisconsin.

Cutting’s work resulted in a flawless three-year run as Air Force’s snapper for punts, PATs and field goals. He was then invited to the NFLPA Senior Bowl in California, then worked out for several NFL teams.

The feedback that reached Air Force was glowing. Cutting’s spirals were tight, the laces placed perfectly and his size and athleticism were ideal. At 6-foot-3, 245 pounds he was recruited by Kansas State to play center, which speaks to his ability as a football player aside from the ability to snap the ball.

The Vikings already had seven-year veteran Kevin McDermott entrenched at long snapper, but they picked Cutting in the seventh round in April’s draft. It was the first time the organization had used a draft pick at that position, and Cutting was the only long snapper picked this year.

“I give a lot of credit to (special teams coordinator) Marwan (Maalouf) and (special teams assistant) Ryan Ficken,” Vikings general manager Rick Spielman said. “Those guys went out and did a lot of personal workouts with all these specialists and the long snappers, and felt when they came back that he was the best long snapper out there.”

That was the goal. And Cutting achieved it. But he still has to earn the job.

Vikings punter Matt Wile has seen enough in a few weeks with Cutting to be convinced he can do the job.

Wile has also paid close attention to Cutting away from the field. Knowing their positions will leave them attached at the hip if Cutting makes the team, Wile wanted to get a feel for his personality and has noticed many signs of the rookie’s academy background.

“He’s always on time, but that’s pretty normal,” Wile said. “But he’s always there significantly before he needs to be. I have a feeling there’s some carryover from the military there.”

When it comes to competition on the Vikings, Cutting doesn’t have a strong sense of where things stand. He knows everything is being evaluated and said everything has been handled fairly in terms of repetitions.

When Cutting and McDermott stand next to each other, it appears the Air Force graduate is larger than his 5-pound weight advantage would suggest.

“Any time you bring somebody in to compete with somebody, all of a sudden, their game steps up big time,” said Maalouf, the special teams coordinator.

The Vikings, like every other team, will carry just one long snapper. Cutting hasn’t been told when the team hopes to decide on one.

On Friday, Cutting presided over a swearing-in ceremony of newly enlisted Minneapolis-area service men and women. He utilized an off day from Vikings camp to meet with TAPS organization families.

When autograph seekers were herded into a tent holding Vikings special teams players on a military appreciation day, Cutting’s line was far longer than that of the team’s punter, place-kicker and other long snapper.

The unique situation with Cutting’s military obligations has led to extensive coverage from Vikings media. A Lyft driver who drove The Gazette’s reporter to training camp knew all the details of his position battle and Air Force assignment.

“I’ve done more interviews, signed more things in a few weeks than I did in four years in school,” Cutting said.

Vikings media personnel have been surprised at how much traction the story has gained from a position that is usually cloaked in anonymity. But that’s the whole point of this experiment — to promote awareness of the academy by using an NFL roster spot to amplify the message.

“I want to set the best example that I can for the Air Force Academy and the Air Force,” said Cutting, who said most people he’s met in Minnesota have little more than a peripheral understand of the academy. “I’m very, very fortunate to be in the situation that I am.”

Arriving at this point took several months of working with the Air Force to ensure this unique arrangement would work. Cutting nervously declined most interview requests along the way, worried the wrong statement could hurt his cause.

With that path officially cleared, all that is left for Cutting is to win the job, overcome his naturally quiet tendencies to be an effective recruiter and ambassador and heed his own warnings about blocking out the naysayers.

“Everyone that is within the organization knows and understands what is going on,” Cutting said.

“I am active duty and I am in the Air Force. That’s what I went to the academy for and that’s what I’m doing. I’m fortunate to be able to do both.”

Palmer Ridge graduate Isaiah Sanders has collected accolades for his community work, but now he turns his focus on competing for the starting quarterback role.