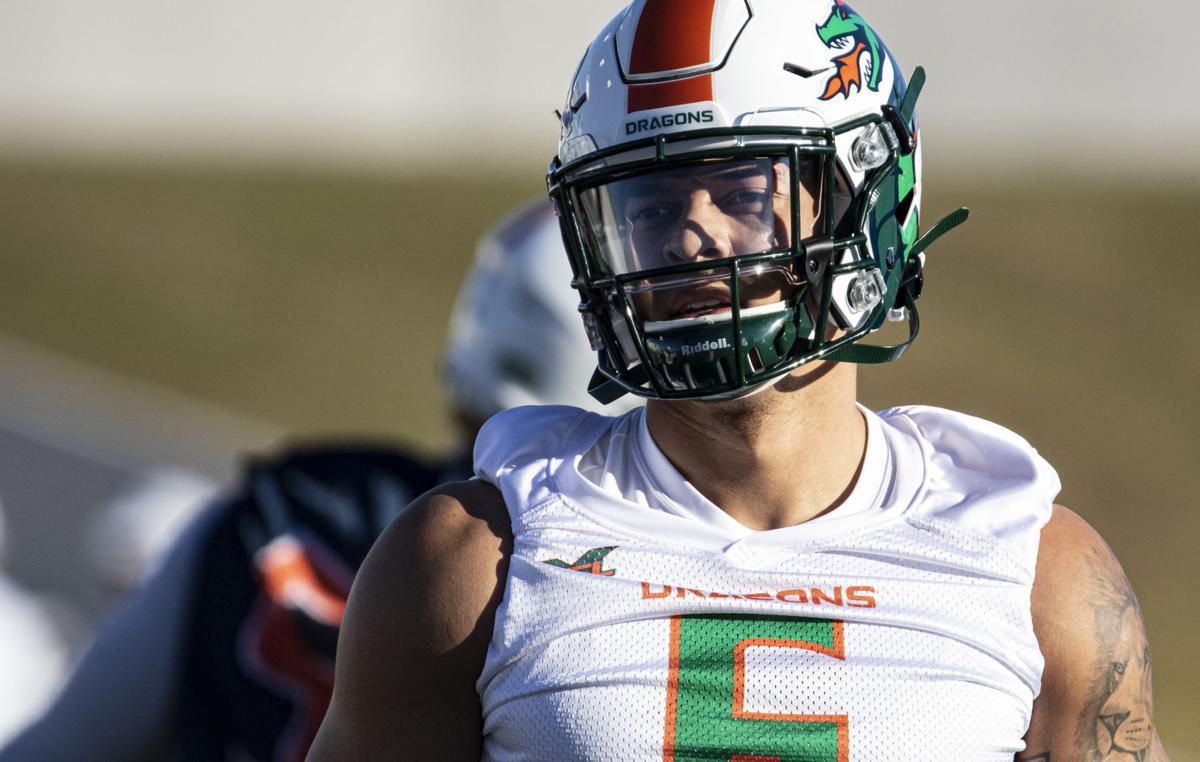 Seattle Dragons receiver Jalen Rowell, known as Jalen Robinette when he played at Air Force, works out Friday at XFL training camp in Houston. (PHOTO COURTESY OF THE SEATTLE DRAGONS) 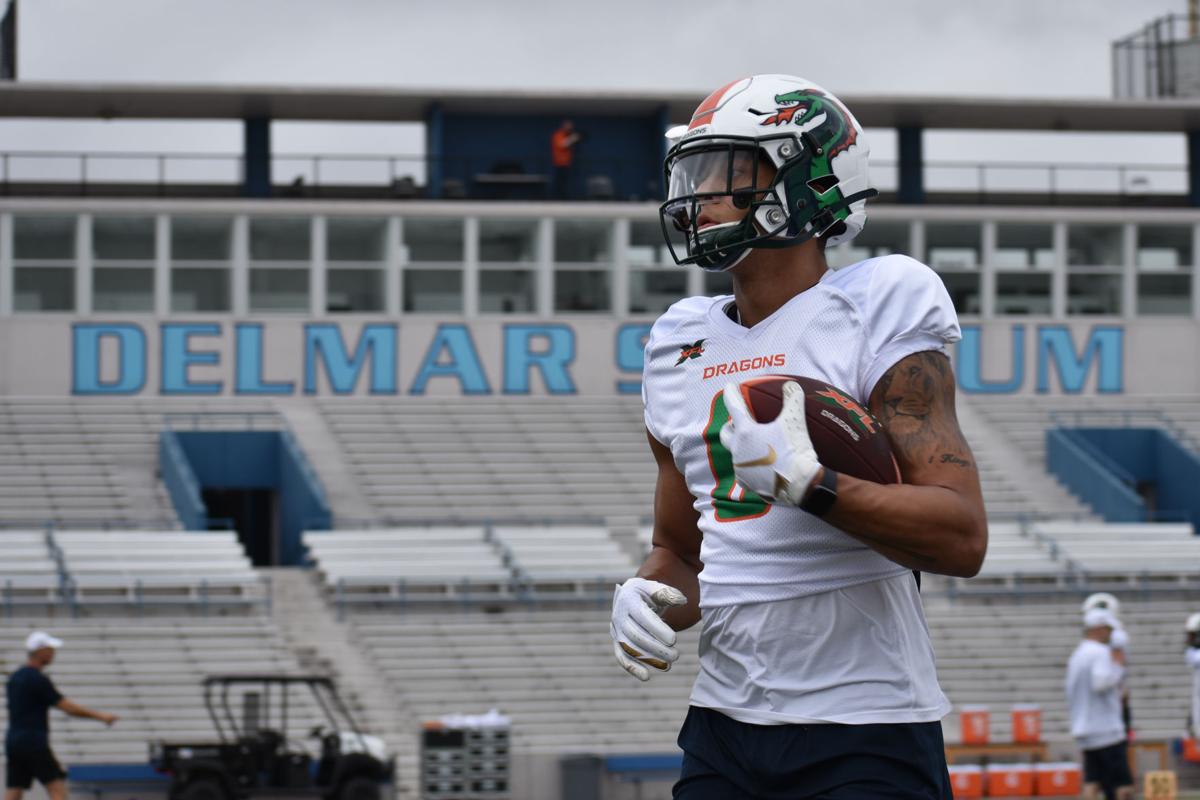 Seattle Dragons receiver Jalen Rowell (known as Jalen Robinette when he played at Air Force) works out at XFL training camp in Houston on Friday, Jan. 10, 2019. (BRENT BRIGGEMAN, THE GAZETTE) 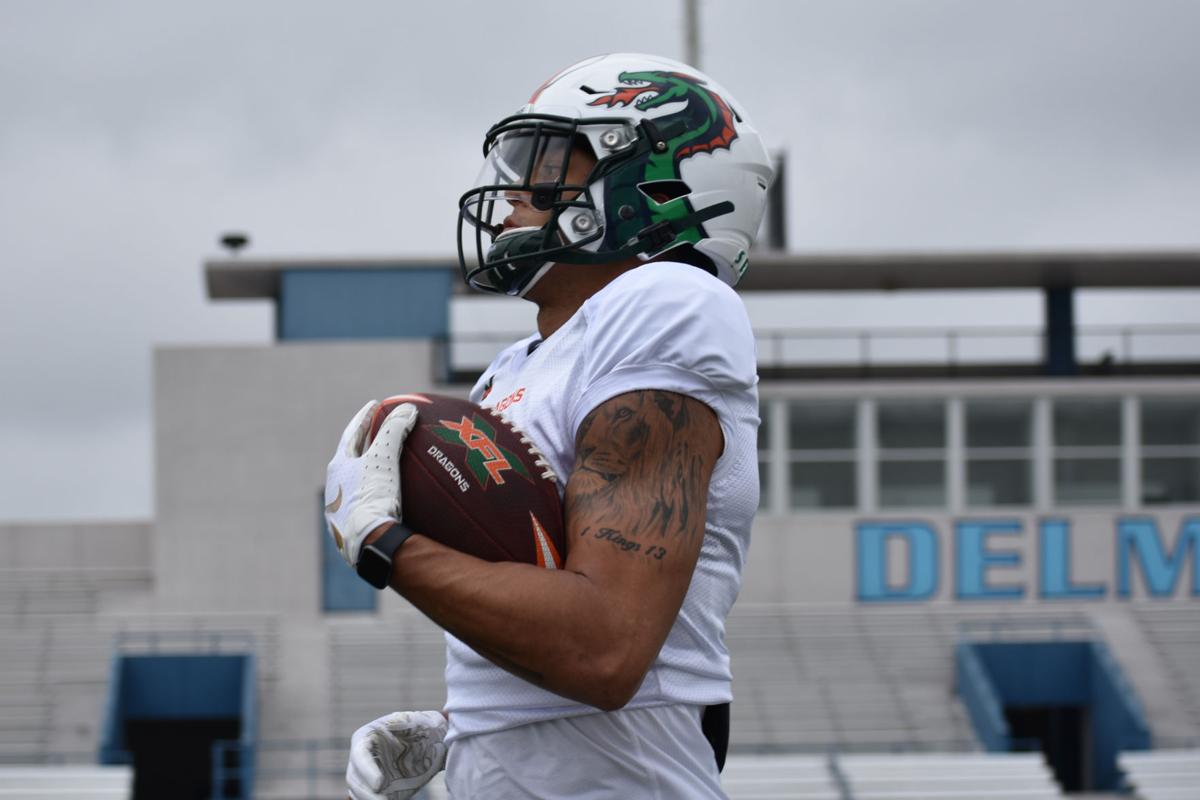 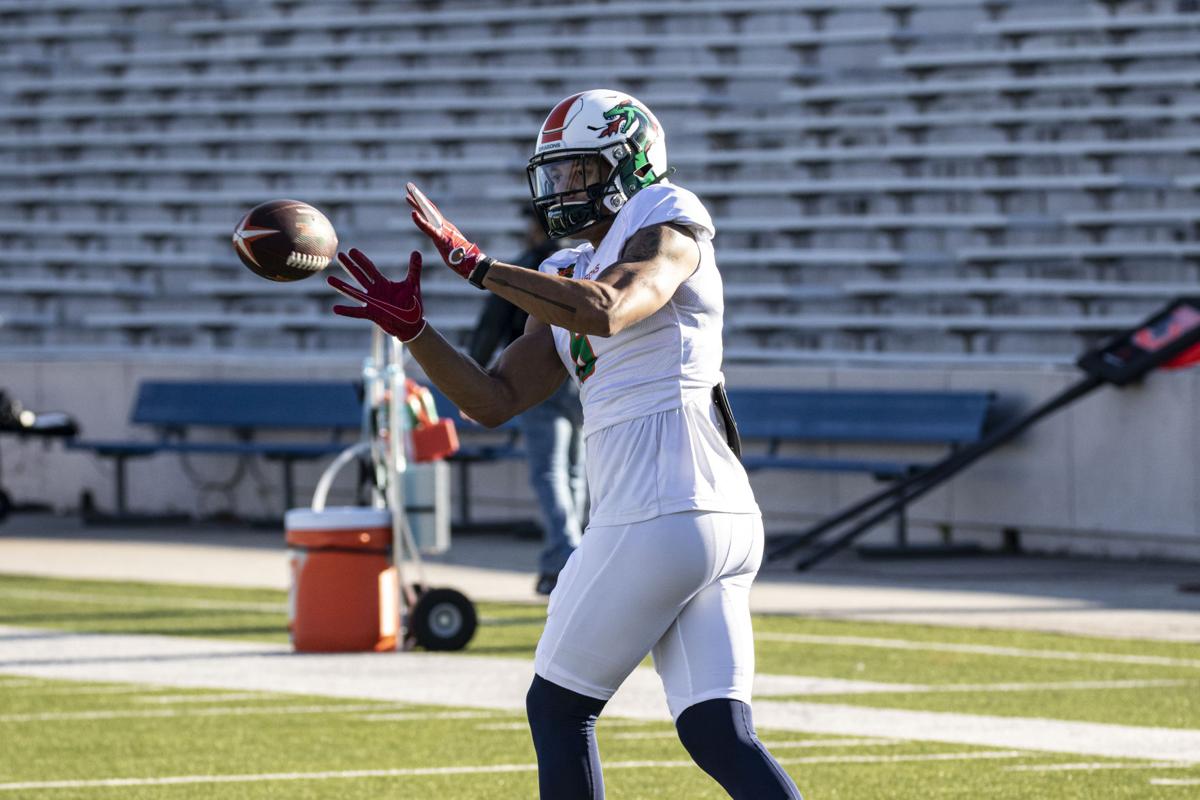 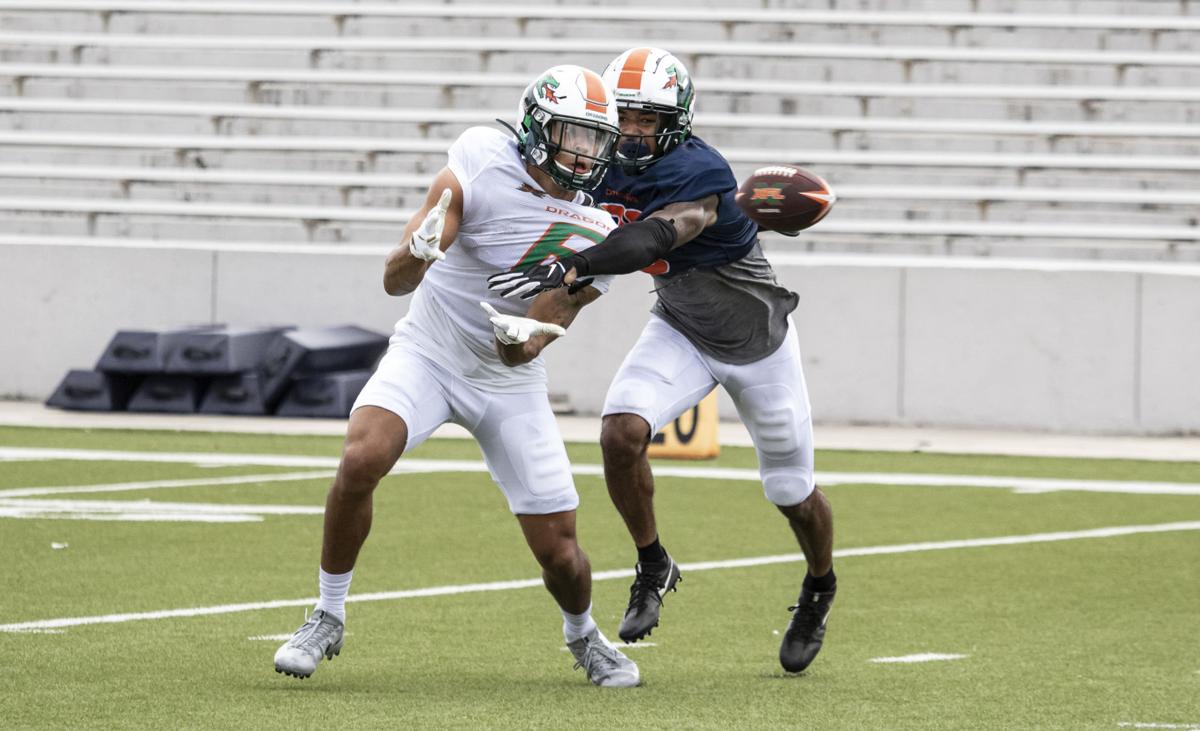 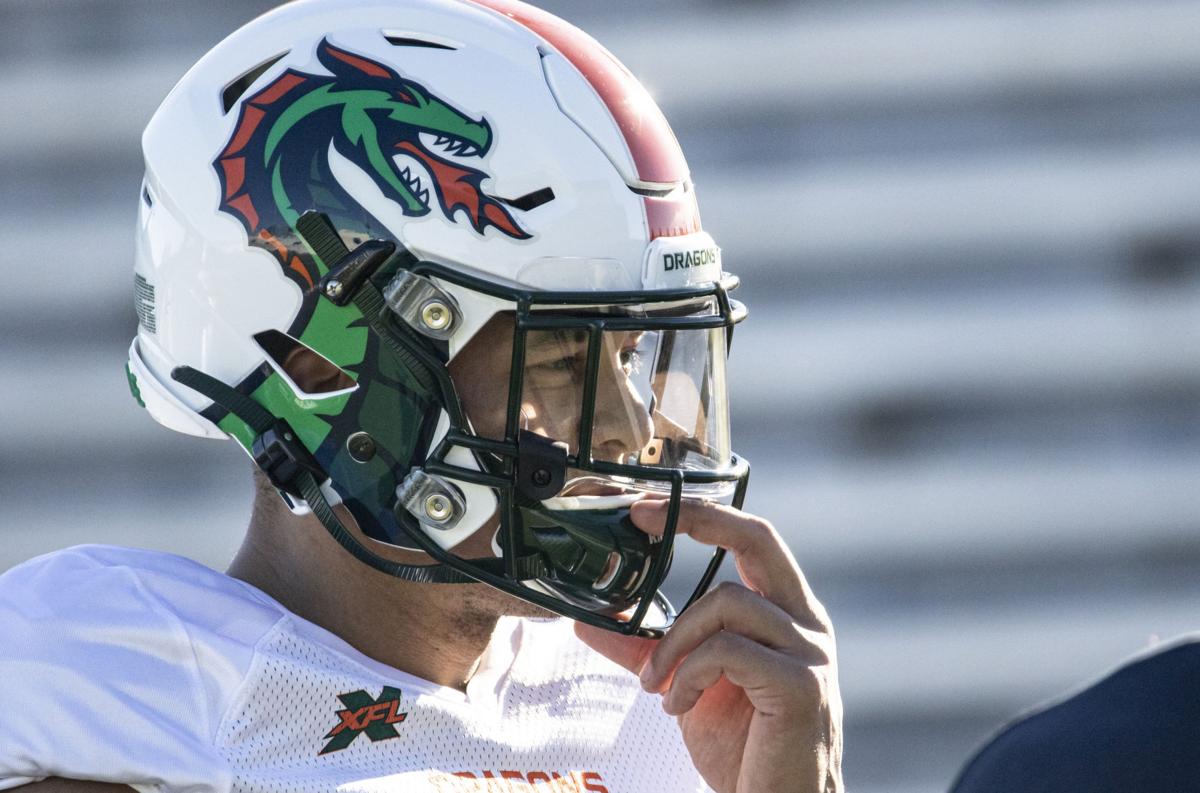 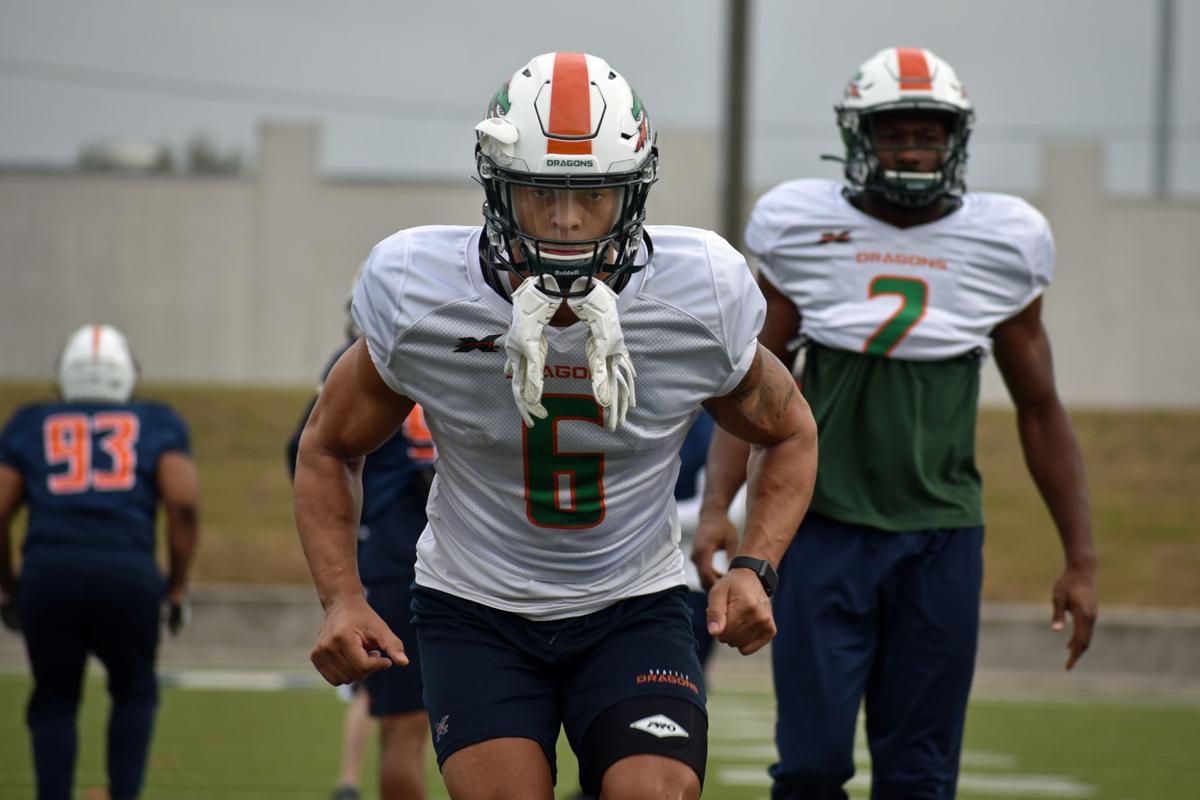 Seattle Dragons receiver Jalen Rowell (known as Jalen Robinette when he played at Air Force) works out at XFL training camp in Houston on Friday, Jan. 10, 2019. (BRENT BRIGGEMAN, THE GAZETTE)

Seattle Dragons receiver Jalen Rowell, known as Jalen Robinette when he played at Air Force, works out Friday at XFL training camp in Houston. (PHOTO COURTESY OF THE SEATTLE DRAGONS)

HOUSTON | Jalen Rowell is only a week into his return to football, the wide receiver’s career and his new league mere budding experiments facing long odds.

But amid the whirlwind of renewed chaos, he’ll be darned if he’ll let the details slide.

“After a meeting he straightened up the chairs and put them back into place,” dumbfounded Seattle Dragons receivers coach Larry Kirksey said.

Not that this surprised Kirksey or Dragons head coach Jim Zorn, who took the Air Force receiver — formerly known as Jalen Robinette — in the XFL’s inaugural draft in October. Kirksey was on the Denver Broncos staff with Air Force coach Troy Calhoun in 2004 and received a glowing recommendation for Rowell from Calhoun.

First Lt. Rowell, serving in the Air Force Reserves, blushed when asked about straightening the chairs.

“It’s just a thing that’s instilled in you at school,” he said. “It’s just the little things, taking a couple extra to make sure the room is clean. I’m sure any other guy would do that … if there weren’t snacks in the next meeting room.”

The Dragons don’t have Rowell in Houston, where the eight XFL franchises have converged for the first half of training camp, to organize chairs. And Rowell could still be working logistics in Las Vegas on active duty, if he hadn’t felt he logged enough time sitting in a chair.

This isn’t an after-school-special, give-you-all-the-feels story of a guy in a cross-your-fingers league, not in the eyes of Rowell and the collection of NFL veteran players who have spent the past week colliding at Delmar Stadium, a high school shrine to the sport located west of downtown Houston.

This is a fight for life for players and a league, and Rowell just wants — finally, two years later — a fair shot in that fight.

Rowell is a top-two all-time receiver in Air Force history, a 1A or 1B with All-American Ernie Jennings.

But pro coaches see more of a project in him.

To Zorn — the former Washington Redskins coach and Seattle Seahawks quarterback — and Kirksey, the 6-foot-4, 220-pound Rowell is a player with all the physical tools but one who has never benefited from time in a traditional offense. He caught 120 passes for a program-record 2,697 yards and 18 touchdowns in Air Force’s run-heavy version of a triple-option.

“Playing in that offense, he’s going to have a lot of route concepts and things of that nature to pick up,” Kirksey said. “But he does have the skills to play the position.”

Kirksey has molded similar clay. As the San Francisco 49ers receivers coach from 1994-99, he helped Terrell Owens blossom when he arrived from Tennessee-Chattanooga into the NFL’s No. 3 all-time leading receiver.

“He didn’t have a lot of route concepts either,” Kirksey said of Owens, whom he coached for the Hall of Famer’s first four years in the NFL. “He had the skill set and he worked at it. I’m not saying Jalen is that type of player yet, but, hopefully, because of his mindset and his maturity and mentality and things of that nature, hopefully, we can put all of that together.”

Rowell welcomes the change, as would any receiver in his position.

“For a guy like me coming from an option offense into a team that likes to spread it out and chuck the ball, I’m very happy about that,” he said. “No offense to the triple option. I’m learning a lot, especially from the guys around me. I’m very excited about that.”

Rowell’s teammates have been impressed with him through the start of camp.

“Honestly, he seems just like any other receiver,” said Kasen Williams, who has spent time in the NFL with Cincinnati, Seattle, Cleveland and Indianapolis, though never on an active roster. “I don’t see anything different in his game because he played in a triple option. He just seems like a guy who’s been doing it and he knows how to play the position.”

New league is an X-factor

This was certainly not NFL training camp.

On Friday, when The Gazette’s reporter caught up with Rowell and the Dragons, there wasn’t a fan in sight. For a while, a kicker held the yardage marker as part of the chain gang.

The players are clear that they see the league as a steppingstone to the top level.

This is a league beginning in the shadow of the recently failed Alliance of American Football, which suffered an embarrassing collapse during its first season in April 2019.

The XFL has the advantage of WWE creator Vince McMahon’s backing and Oliver Luck’s football expertise. Big-name coaches like Zorn, Bob Stoops, June Jones and Kevin Gilbride lend instant credibility. The upstart league offers innovations, but not the extreme versions of its first failed incarnation from 2001, perhaps best remembered for a player wearing He Hate Me as the name on his jersey.

The rules will allow two forward passes if the first one remains behind the line of scrimmage. Punts that go out of bounds between the 35-yard line and end zone will come back to the 35-yard line as a “major” touchback, encouraging more returns. There will be no kicking PATs, as teams will instead line up from the 2-, 5- or 10-yard line for plays worth 1, 2 or 3 points, respectively. Overtime will take on the style of soccer shootouts, with teams alternating five attempts from the 2-yard line. The play clock will be shortened to 25 seconds to create faster play.

“This will be a game where you need to play attention, and you might need to save that trip to the concession stand because we’re going to be rolling,” Rowell said.

The league’s study found 40 million fans hunger for more football after the Super Bowl, so this will try to fill that void — with Rowell’s Dragons opening at the DC Defenders in the first game on the second weekend of February.

Potential face of the league

One of the first videos the XFL pushed on social media was of Rowell telling his story of serving on active duty and seeking to revive his football career.

It’s apparent the league is banking on Rowell, just as he is banking on it providing him a stage to recreate the momentum he had in his career. He was rumored to be pegged for a mid-round NFL draft selection in April 2017 before the Department of Defense abruptly changed the rules to again require service academy graduates to serve two years on active duty before pursuing professional sports. That rule has been altered again recently, allowing graduates to defer their service time to play.

“It was a huge honor,” Rowell said of the XFL including him in its early marketing. “Being able to take what I was doing in active duty in the Air Force and how I was training and using those lessons I learned serving as an officer to my preparation here as a football player and as a leader and as a teammate coming to the XFL, they definitely did a good job pushing it and I felt very welcomed in that sense.”

Zorn said Rowell “graded very high” in evaluations and has a chance to be a strong player.

Rowell pulled his left quadriceps muscle during a December minicamp, so that has slowed his progress. On Friday he was running largely with the second team, but took as many snaps as any other receiver during a prolonged 11-on-11 session.

“He’s a big, tall kid that probably didn’t get enough accolades from a receiver standpoint because everybody wants 4.29 (speed in the 40-yard dash),” Zorn said. “But he has a real presence on the field and he’s smart.

“The sky’s the limit for him.”

Rowell changed the subject quickly when asked for a reaction to the rules change that will allow grads from Air Force, Army and Navy a clearer path to professional sports, saying only that he’s happy to serve as a mentor to current Falcons like receiver Geraud Sanders.

He said he holds no ill will, and he remains proud to wear a large Air Force bolt tattooed on the inside of his left arm as a reminder of his background. He was not a touted recruit, growing up as a basketball player and mostly playing wildcat quarterback at a small school in Ohio and hasn’t forgotten the program that saw his potential.

“Air Force took a shot on me,” said Rowell, who now goes by his mother’s last name. “They were what helped mold me into the man I am today and the player, so I’m always going to be a Bolt. Coach Calhoun, him and I text and we keep in touch. Special place in my heart — Colorado Springs and the Air Force Academy.”

Perhaps it’s ironic that the military, which initially provided the roadblocks to Rowell’s pro career, is now seen as a strength because of the traits it developed at the academy and on active duty.

“I just think they’re steady and they have some leadership skills,” Zorn said of Rowell and Seattle teammate Keenan Reynolds, who scored an NCAA-record 88 rushing touchdowns as Navy’s quarterback. “What I love about both of those kids, especially Jalen, is they seem to have poise around situations.”

Rowell may remain a project in a league with an unknown future, but everyone around him sees that he has the tools to make it work if he can perfect the little things. And Rowell couldn’t ignore the little things — perfecting routes, reading defensive backs, even straightening chairs after meetings — if he tried.

“He has earned the right to be here, and he’s not expecting anything to be given to him,” Zorn said. “What I really love about him is he’s willing to earn everything that the future might hold for him.”

Broncos bringing in Pat Shurmur as offensive coordinator after firing Rich Scangarello, according to report

After taking a deep dive into arguably the worst offense in the NFL this season, Broncos head coach Vic Fangio has decided to fire offensive coordinator Rich Scangarello, 9News reports