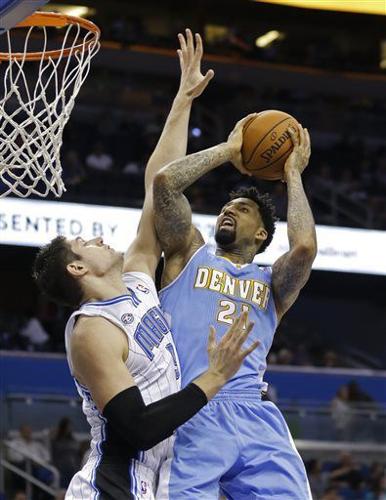 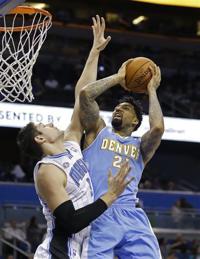 Orlando Magic's Nikola Vucevic, left, fouls Denver Nuggets's Wilson Chandler, right, as he goes up for a shot during the first half of an NBA basketball game in Orlando, Fla., Wednesday, March 12, 2014. (AP Photo/John Raoux) 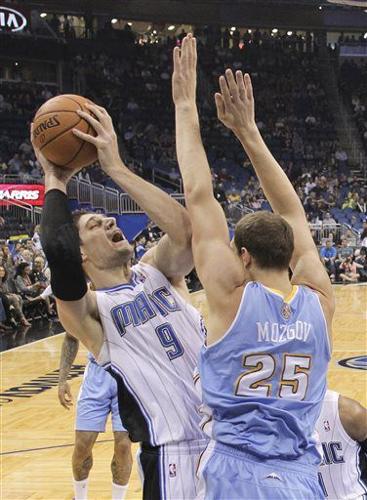 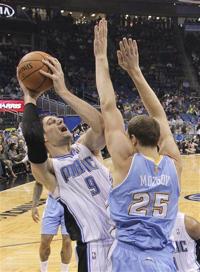 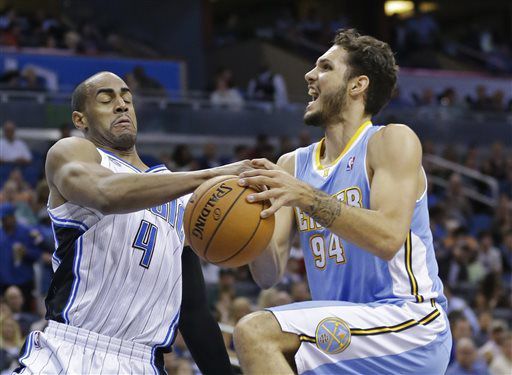 Orlando Magic's Arron Afflalo (4) knocks the ball out of the hands of Denver Nuggets's Evan Fournier (94) as he goes up for a shot during the first half of an NBA basketball game in Orlando, Fla., Wednesday, March 12, 2014. (AP Photo/John Raoux)

Orlando Magic's Nikola Vucevic, left, fouls Denver Nuggets's Wilson Chandler, right, as he goes up for a shot during the first half of an NBA basketball game in Orlando, Fla., Wednesday, March 12, 2014. (AP Photo/John Raoux)

Orlando Magic's Arron Afflalo (4) knocks the ball out of the hands of Denver Nuggets's Evan Fournier (94) as he goes up for a shot during the first half of an NBA basketball game in Orlando, Fla., Wednesday, March 12, 2014. (AP Photo/John Raoux)

ORLANDO, Fla. — Among the many things the struggling Denver Nuggets are finding out this season is that they need at least 100 points to beat most NBA teams.

The Nuggets got there with plenty to spare and needed all of it to rally past the Orlando Magic 120-112.

The Nuggets, who are 2-24 this season when scoring less than 100 points, got 26 points from Kenneth Faried, 21 from Wilson Chandler and 20 from JJ Hickson to overcome a 13-point deficit against Orlando. Denver shot 51.1 from the field and hit 10 of 22 3-point attempts.

"We didn't miss too many shots in that second half," said point guard Ty Lawson, who had 17 points and 12 of his team's 30 assists. "In this league, when you get everybody touching the ball and scoring, you're going to give that extra effort at the defensive end. Everybody had it going for us in the second half."

That included the Nuggets reserves, who outscored Orlando's bench 34-20 in the final two periods. Hickson had 13 of his 20 in the second half and backup point guard Aaron Brooks added nine points and five assists to help Denver expand on its 52-50 halftime lead.

"Early in the season, we had the No. 1 bench in the league so this is no surprise," said Hickson, who also had nine rebounds. "We know our identity. We're an up-and-down team, but we played some good defense, made them take some tough shots and had fun out there."

It was anything but fun for the Magic, who have lost five of their last six. They led 40-27 in the middle of the second quarter, but lost their rhythm at both ends of the floor.

Arron Afflalo led Orlando with 24 points, Nikola Vucevic added 20 points and 16 rebounds, and Jameer Nelson had 19 points and nine assists, but none of them could provide enough spark in the second half when the Magic needed a lift.

"In the past couple of games, we got up early and took our foot off the gas," said rookie Victor Oladipo, who had 15 points and three assists, but struggled to keep up with Lawson and Brooks at the defensive end. "They came in and played harder than us. We've got to learn how to play with a lead."

They've also got to learn that Vucevic can't do all the rebounding. Denver beat Orlando 52-38 on the boards. Only Kyle O'Quinn, who contributed 10 points and eight rebounds, had more than four boards in support of Vucevic.

"A big part of why we were on the losing end tonight was their bigs (Faried, Hickson, Chandler) were really effective at getting in the paint and scoring the basketball," Magic coach Jacque Vaughn said. "This is another situation we've got to learn from."

After trailing by as many as 13 points in the first half, Denver took an 85-74 lead into the fourth quarter. A fast-break layup by Hickson gave the Nuggets a 105-92 lead with 4:49 to play.

The Magic trimmed the deficit to five on two occasions, but couldn't get any closer. Afflalo's two free throws made it 115-110 with 1:26 to play, but the late rally died when O'Quinn couldn't run down a pass on a fast-break and turned the ball over.

Brooks converted a layup on the ensuing possession to give Denver a 117-110 lead with 1:03 to play and the Nuggets coasted home with the win.

Vucevic had 12 points and seven rebounds in the first eight minutes to help the Magic build a 23-15 lead, but Denver cut it back to 27-23 by the end of the period.

Lawson made a 3-point play to give Denver its first lead of the game at 51-50 with 4 seconds left, then stole the inbounds pass and fed Faried, who was fouled on a dunk attempt. He made one free throw to give Denver a slim halftime advantage.

NOTES: Denver outrebounded Orlando 52-38. The Magic are 0-31 when being outrebounded this season. ... Denver had a .388 winning percentage against Orlando (19-30), the second-worst winning percentage against any franchise in the NBA. ... Lawson is averaging 22.9 points and 11.1 assists his last six games. ... Magic reserve G Doron Lamb made only his second basket in his last five games. He is 2 for 17 (11.8 percent) in that stretch.