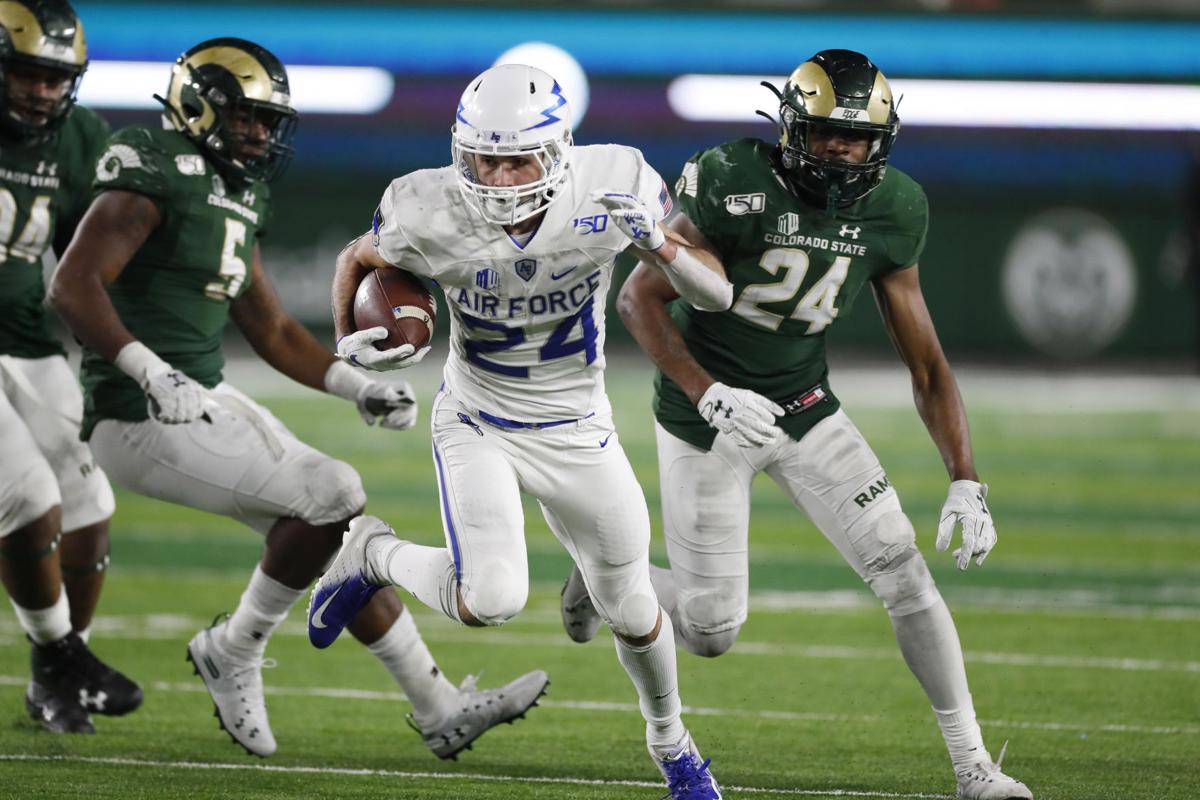 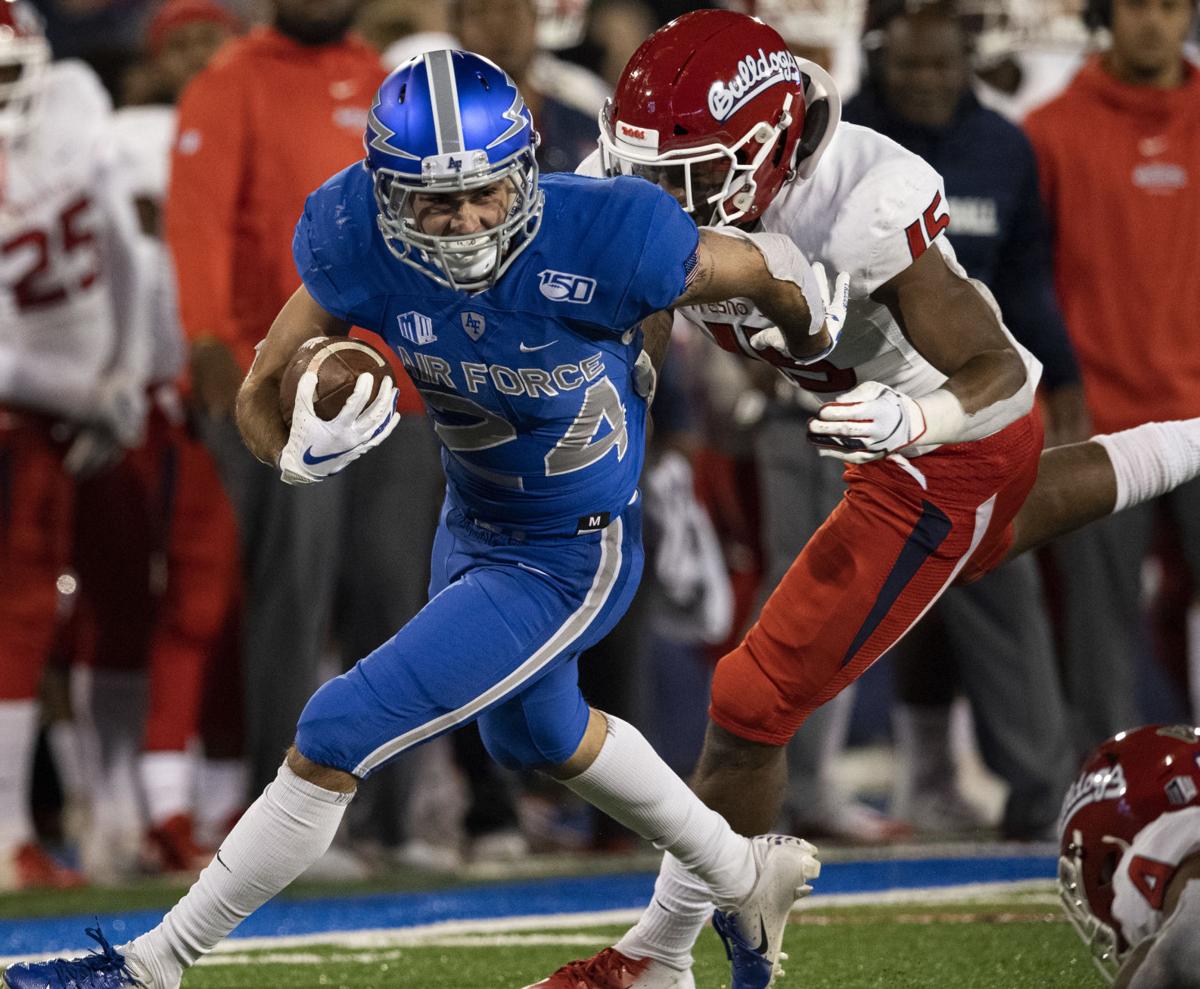 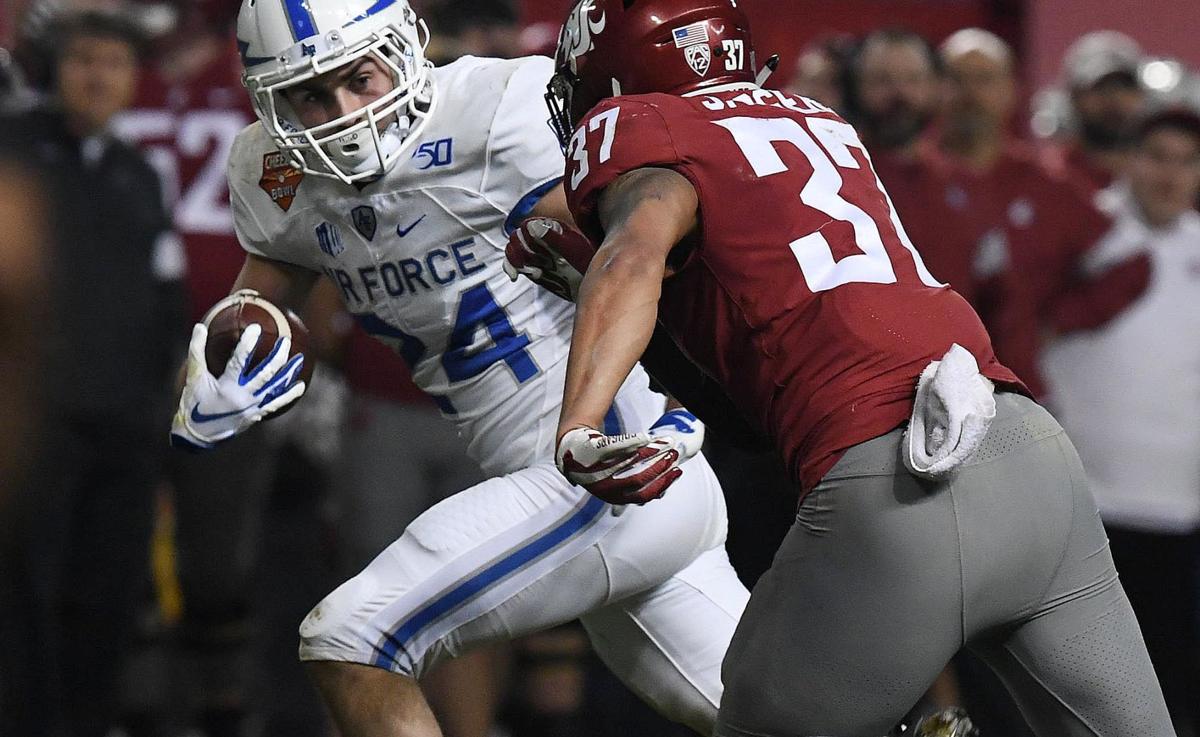 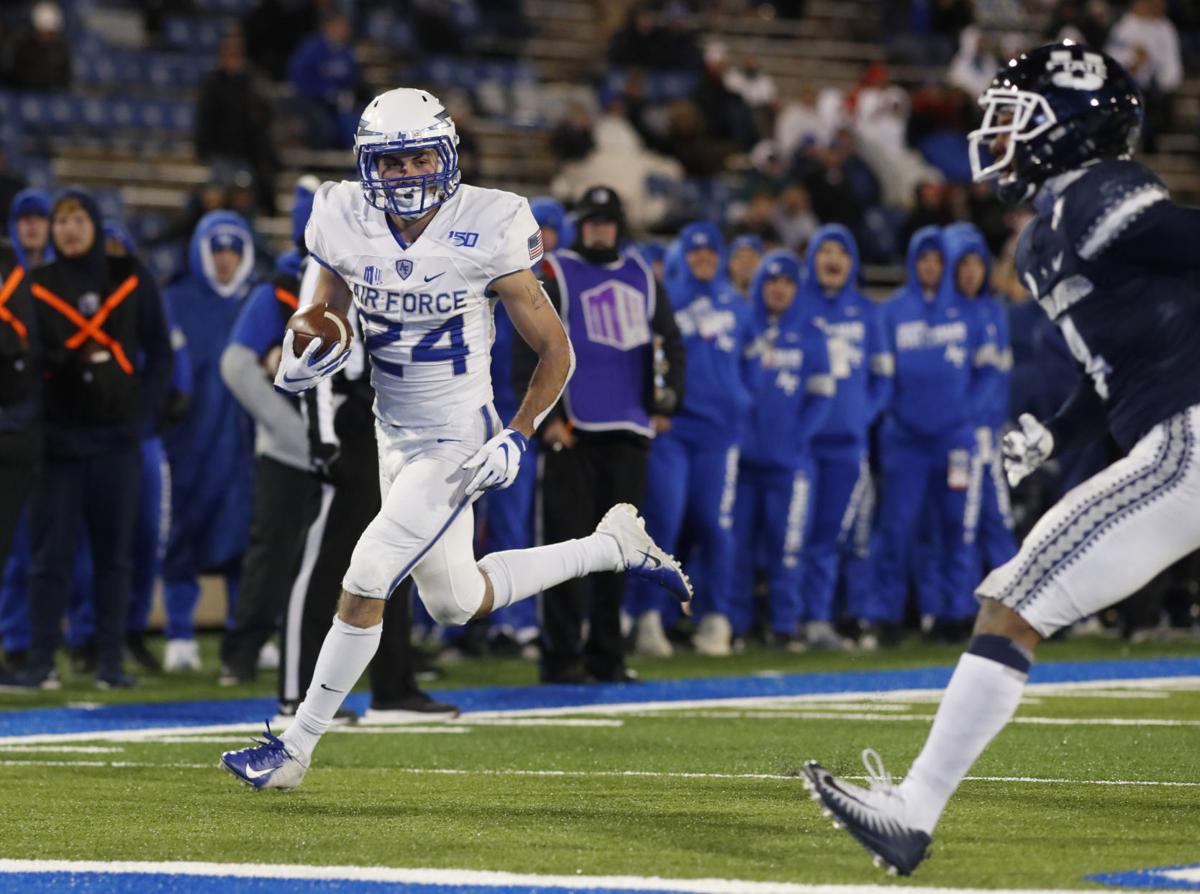 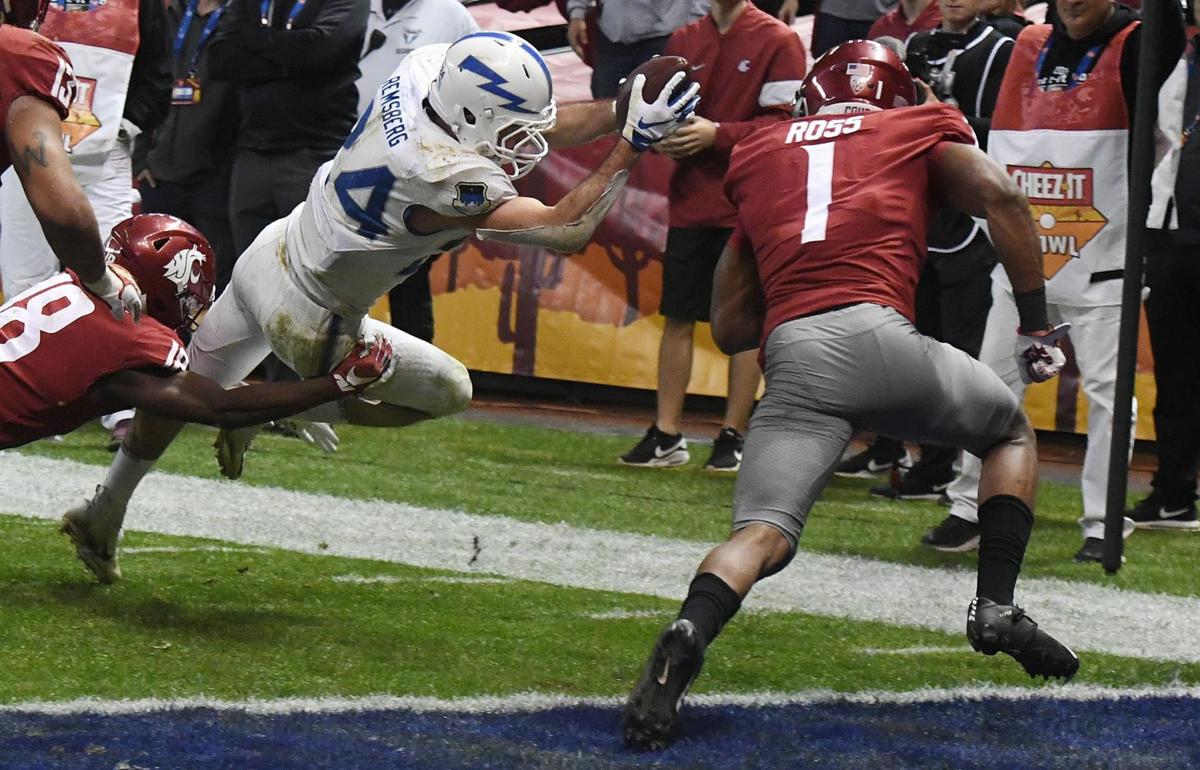 Air Force running back Kade Remsberg dives for a touchdown while being tackled by Washington State cornerback George Hicks III in the fourth quarter Friday. The score put away the game at the Cheez-It Bowl in Phoenix.

Air Force running back Kade Remsberg dives for a touchdown while being tackled by Washington State cornerback George Hicks III in the fourth quarter Friday. The score put away the game at the Cheez-It Bowl in Phoenix.

The most surprising statistic of Kade Remsberg’s 1,050-yard junior season provides the most hope for improvement in his senior campaign.

The tailback had three 100-yard games. He averaged 5.8 yards per carry, fourth-best among Air Force tailbacks to reach 1,000 yards. He was the Cheez-It Bowl offensive MVP. He scored the difference-making touchdown in a pair of victories over Pac-12 teams, games where he ran for a combined 324 yards.

“Of course I want to break the long ones, get the big TDs, but as long as we’re winning games I’m happy, to be completely honest with you,” the Kansas native said during a recent spring practice after the Falcons’ 11-2 season that wrapped with a No. 22 national ranking. “Last season was just phenomenal. If we can replicate that, get even a few more wins, that’s just all I can hope for, all I can ask for.”

The Air Force junior tailback ran for 178 yards in the Cheez-It Bowl and scored a key touchdown on fourth down with 3:50 remaining.

Running backs coach Jake Campbell, one of many names Remsberg passed last year on Air Force’s all-time rushing list, said the focus for Remsberg during the offseason would be finishing runs. Because his speed allows the Falcons to scheme differently, often trusting him to work past an unblocked defender, Remsberg sometimes finds himself in position where he has to make one person miss. Then another. Sometimes a third.

Telling him to “trust your speed,” Campbell wants to see Remsberg develop a feel for getting upfield quicker after that initial move rather than trying to continue to dodge tacklers. Most of the time that will only result in 1 or 2 extra yards. Sometimes, he’ll take it to the house.

“We anticipate him breaking quite a few next year,” Campbell said. “He’s learning. He’s extremely coachable. He wants to be better. Listening to guys like coach (Ben) Miller and myself, who have played the position, it’s helping him. Small little tweaks. He enjoys it. He loves that grind.”

Remsberg, who broke a career-long 54-yard run in a victory over New Mexico as a sophomore, played a key role in Air Force’s explosive offensive last season. His ever-present threat on the edges presented room on the inside, where Taven Birdow and Timothy (Duval) Jackson ran for a combined 1,584 yards — including bursts of 64, 41, 40 and 40 yards. And in the passing game, the Falcons routinely capitalized on safeties creeping forward to hit seven throwing scores of 50-plus yards.

Offensive coordinator Mike Thiessen offered a holistic explanation for the big plays the offense was able to create. Eight players had gains from scrimmage of 30 or more yards, just not the workhorse tailback, whose longest reception also went for 29 yards.

“And when you run the ball as well as we did last year, with some of the guys up front and the fullback game, it’s going to make defenses want to creep up closer to the line of scrimmage a little bit, which creates opportunities on the back half. We’ve kind of always said here that the teams that are going to be really good are when you can run the ball really well, which we always seem to do, but when you can hit the big play actions over the top when teams are daring you to.

So, there’s nothing broken here — and Hammond, Remsberg, Jackson return, along with seemingly worthy replacements for Sanders and Waters in David Cormier and Brandon Lewis.

“It’s very fun putting your hand in the dirt and knowing you’ve got guys like that behind you who can make plays,” offensive tackle Parker Ferguson said.

If a lab attempted to produce the perfect parental influences for an Air Force running back, it would look a lot like those that combined to r…

Still, there’s an opportunity for Remsberg to add bigger numbers to his total if he can throw in a few big numbers. As it is, he’s tied with quarterback Terry Isaacson (1961-63) for No. 21 on the program’s all-time rushing list with 1,633 yards.

Coach Troy Calhoun would prefer to focus on the controllables, of course.

“He made really, really good improvement, gained good confidence,” Calhoun said of Remsberg’s junior season. “Adding a little more strength will help him, he knows that. I think he’ll do that. The way he works over the next five months in the weight room will be a key part of that. I think more than anything, just good consistency.”

Remsberg said his status as the program’s 16th player — and 10th nonquarterback — to post a 1,000-yard season does nothing to change his desire to improve.

“I feel like it doesn’t really change anything,” he said. “I’ve got something to prove every single year. I’ve got to work my butt off. Just like all my teammates, we’re working side by side. I’m still here to work.”

Kade Remsberg became the 10th Air Force running back to post a 1,000-yard rushing season in 2019 (six quarterbacks have also done it). Here's the full list with rushing yards and yards per carry.

Kade Remsberg had envisioned this moment since eighth grade.