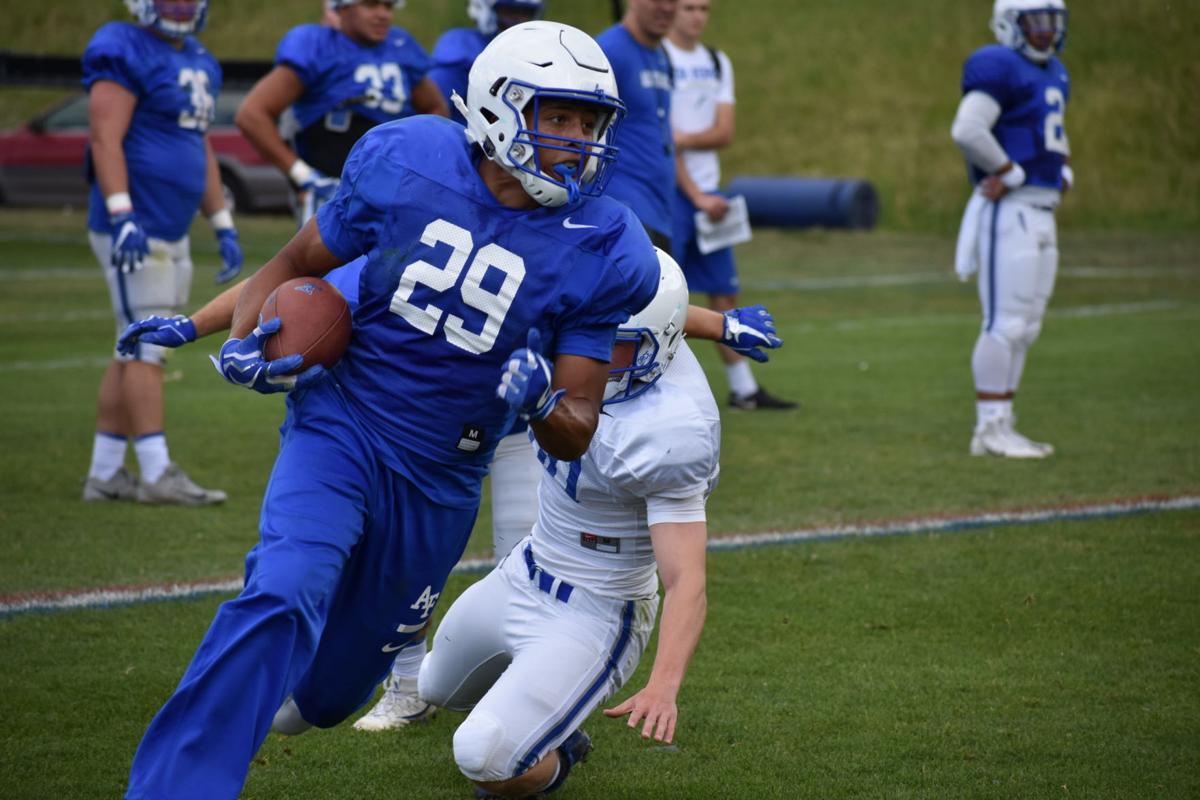 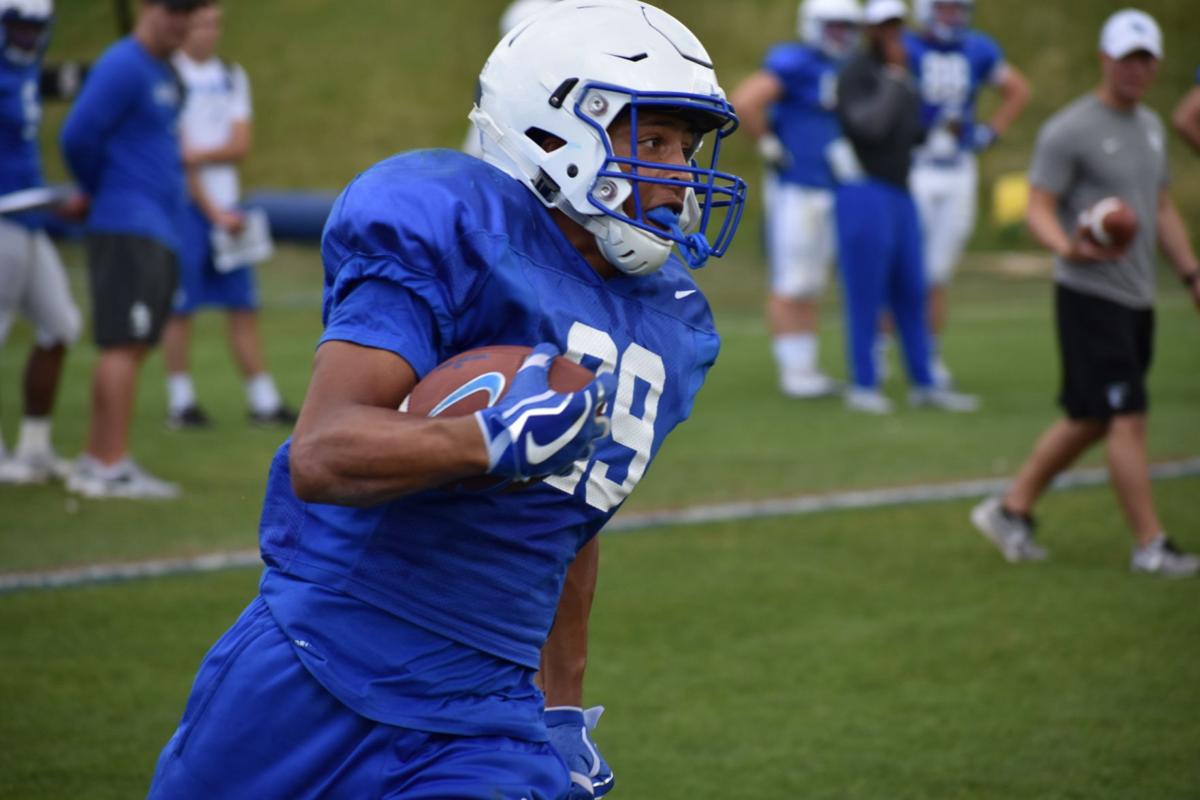 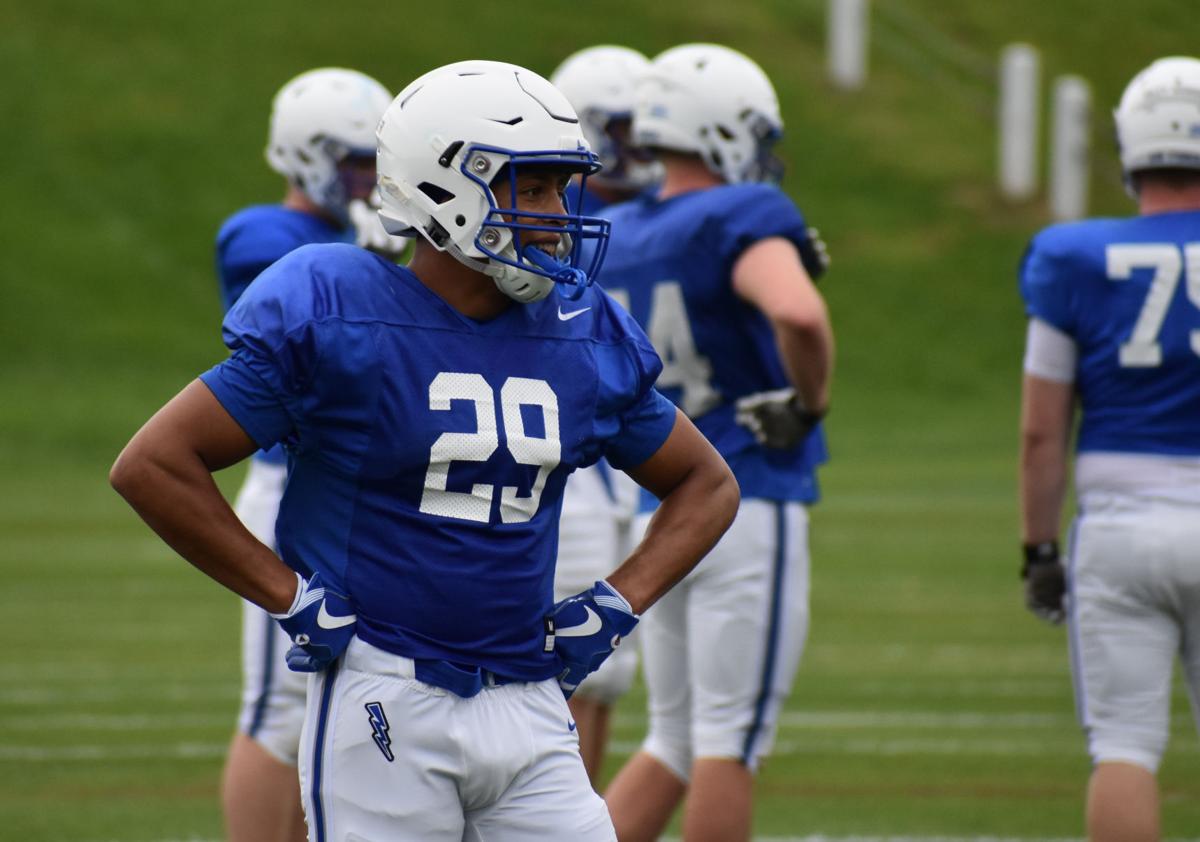 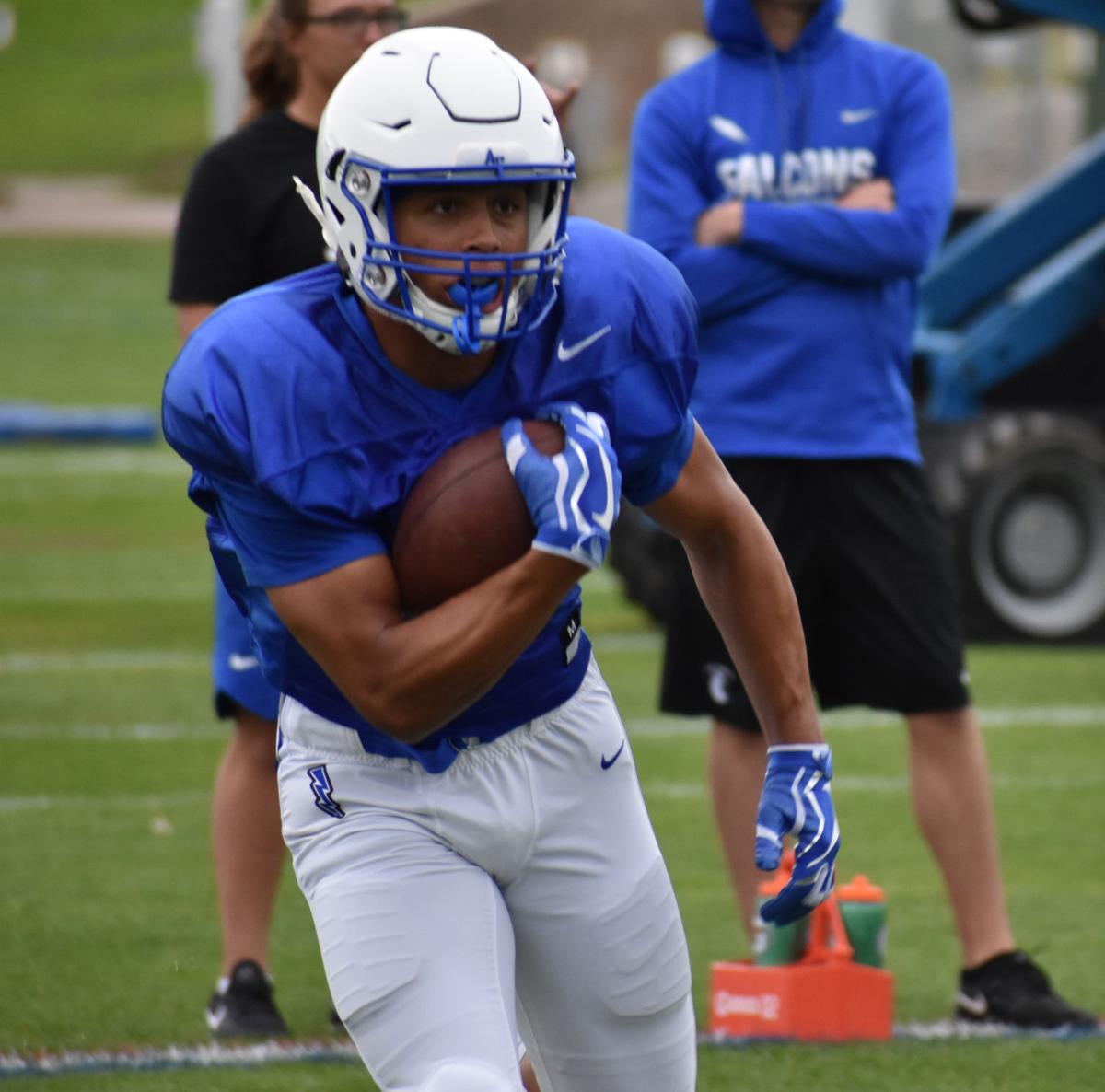 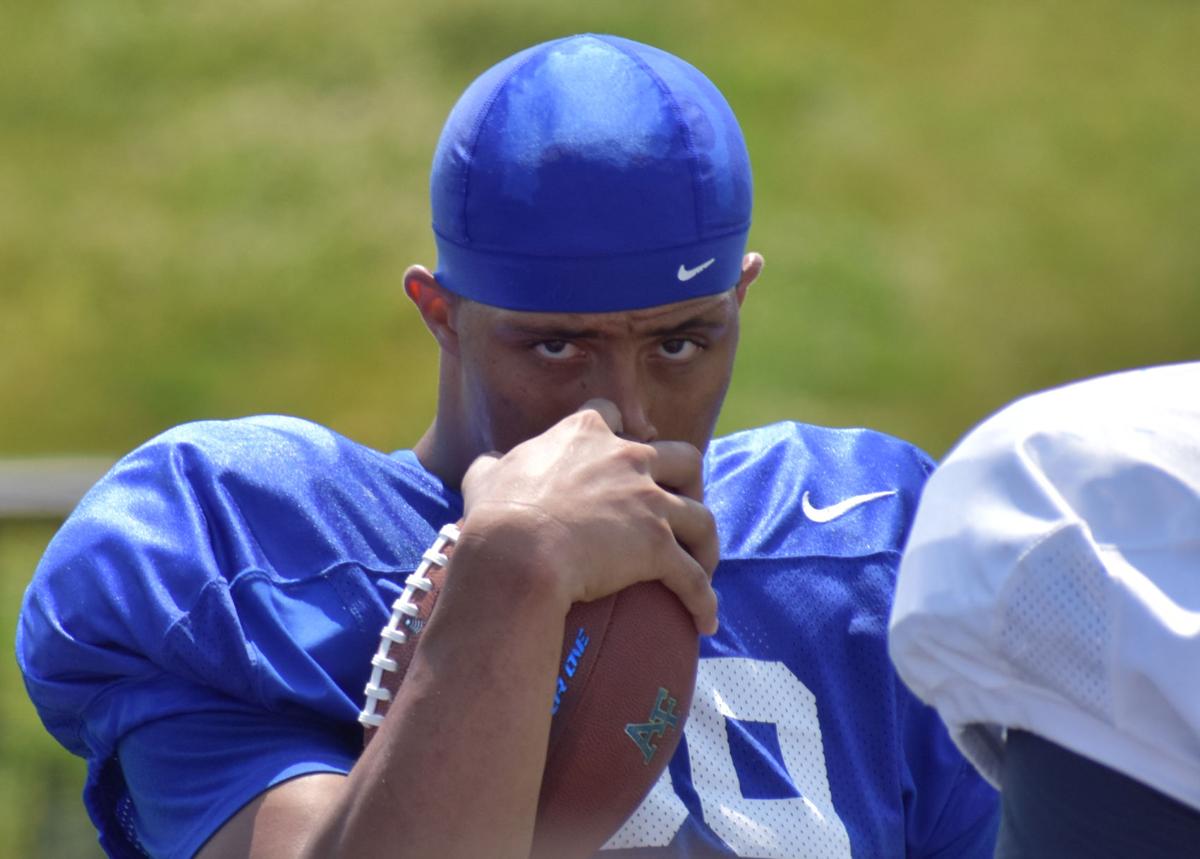 No, not in that way. Nothing is ever what you’d expect when it comes to the eccentric and endlessly interesting junior.

You see, he played the role of the Beast in a production of “Beauty and the Beast” in high school. He’s a self-described “English major at a techie school.” He holds Hollywood aspirations. He has planned his military career path, in part, as a revenge plot against the public affairs officers who nixed his plan to shoot a short film while at Air Force’s prep school.

“It should have gotten approved,” said the current front-runner to take over at tailback for the Falcons.

Saucier’s plan after graduation? Go into public affairs. Fix the thinking that led to his rejection. Serve long enough to get transferred to the Air Force’s office in Los Angeles. Build film industry connections. Eventually retire from the military and transition to producing movies.

“I’ve got scripts and stuff,” he said.

And then his speech pattern quickens. He talks about his taste in movies, which runs the gamut from fantasy (“I love ‘Harry Potter’”) to “realistic fiction” (“You haven’t seen the old Japanese film ‘Old Boy?’ Look it up. Not the remake, but the original.”).

“I like mind-boggling,” he said. “Things that will make you think.”

His scripts have touched controversial topics that include suicide.

“I’ll talk about whatever,” he said. “I like sparking the viewer’s emotions. I do dramas. A lot of the stuff I do is dark, but that also helps me with my comedy.”

Oh yes, football. A conversation with Saucier veers off in so many directions you might forget that he’s not only on the team, but has monopolized first-team reps over the first week of practice at tailback — a position that has churned out 1,000-yard rushers in five of the past eight years under coach Troy Calhoun.

Saucier doesn’t forget the football part of things, and will say as much in a way so honest it is not often encountered at the academy.

“I came here to play football,” Saucier said. “I didn’t come here to be a cadet. Sometimes I have to remind myself that being a cadet will help me be a better football player.”

He was the first member of his “biological” family to attend college. And he chose a demanding one. The decision came back to bite him as he was academically ineligible each of the past two years. Last season he said he missed the cut by one tenth of a GPA point.

“Horrible, absolutely horrible,” he said, explaining the academic transition from his Arkansas high school to Air Force. “I had opportunities where I could have left after the prep school and freshman year, but the decision I made to come here was a long-term decision. I knew it was going to set me up long term in my life. Being here and all the bull---- I had to go through, like, that was all short term. I didn’t want to leave on a short-term problem when I came here on long-term thinking.

“And a big thing is the friends you make here. You make friends for life. I could name like 15 people that I could bring to my wedding and be my best man. That’s the way you make friends here.”

Those 15 would be added to the three close friends from high school who shared his passion for drama and film. Their plan is to reunite one day and “work on some cool (stuff).”

And by the way, it’s Saucier — pronounced “sauce-ee-ay. Again, something you wouldn’t necessarily expect.

Here’s another twist — Saucier didn’t grow up watching sports and knew nothing about football prior to suiting up for a game in fifth grade. The first time he carried the ball and he figured the only objective was to avoid being tackled. So he juked back and forth laterally and backward to evade defenders, winding up in his team’s end zone.

Even when he learned the game, he said missed the point. He was always the fastest on the field but developed little nuance to his style. It wasn’t until his senior year when a hamstring injury knocked him out of two games and sapped him of his speed that he had to adjust.

“Instead of just being the fastest guy and running straight and getting past people, I actually had to start thinking about things,” he said. “I had to actually plan out my moves and where I was going to go and actually watch what the defense was doing. That’s when I started getting some of the basic fundamentals of football.”

His abilities attracted then-Air Force assistant Blane Morgan, who made recruiting visits. Saucier accepted an invitation to a camp and impressed, earning a spot at the prep school.

“You’ve seen him mature the past two years when he had to sit out and be on the scout team last year,” Miller said. “He’s matured in the weight room. He’s a really strong, powerful kid and he’s got great speed. He’s just got a motor to him.”

It’s a motor that runs, well, differently. Even his running style is unique, producing more glide than sprint.

“Coaches call it laziness,” he said. “They want to see me struggle when I run.”

They’ve seen him struggle plenty, now they want him to thrive. And isn’t that ultimately what happened to the Beast? Wasn’t his true potential unlocked when he was seen in a different light?

A fairy tale ending is a possibility for this dark dramatist, and maybe that in itself would be the latest twist no one expected.

How much did New England Patriots pay to train at Air Force Academy?