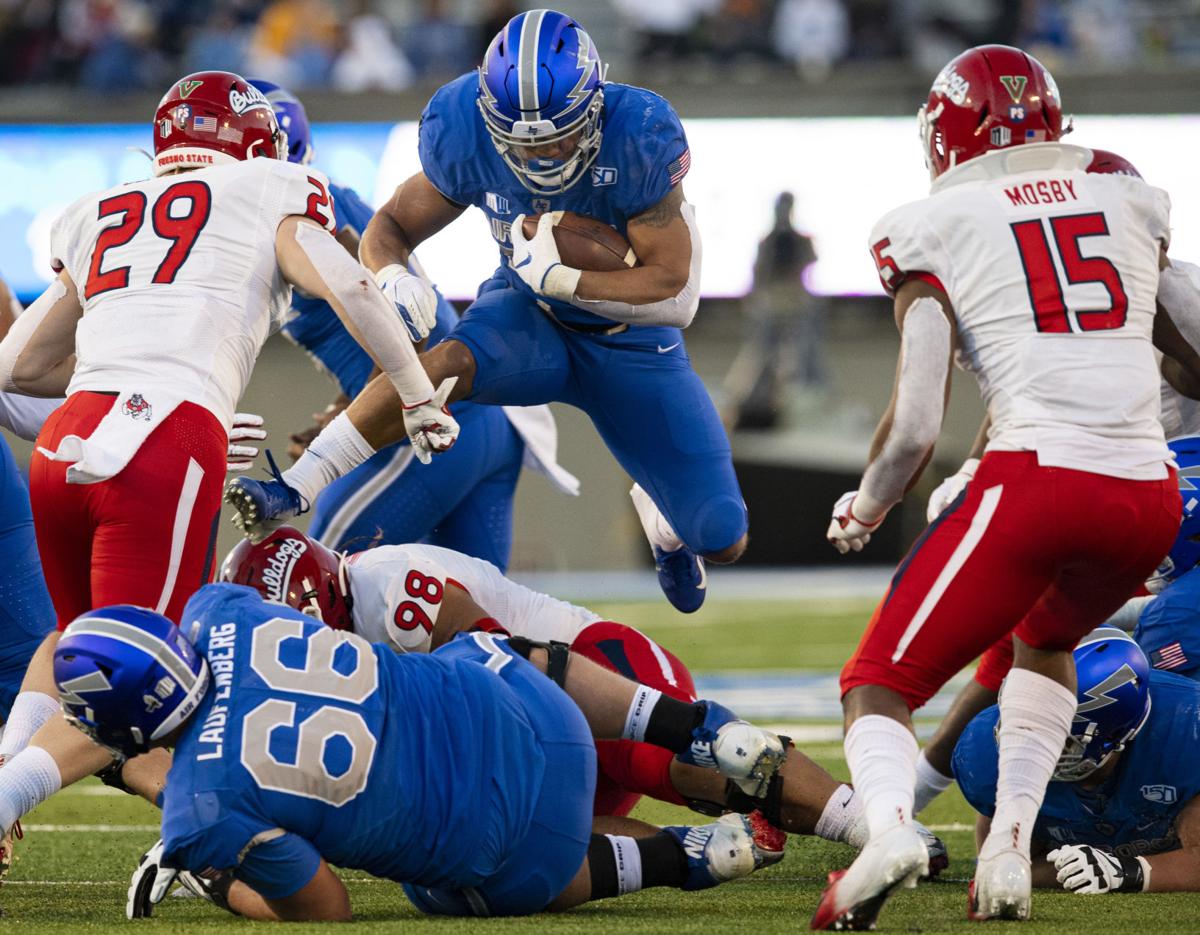 Air Force Falcons fullback Taven Birdow (33) leaps in the air before being tackles for a 5-yard gain by Fresno State Bulldogs linebackers Justin Rice (29) and Arron Mosby (15) during the second quarter at Falcon Field Saturday, Oct. 12, 2019. (The Gazette, Christian Murdock) 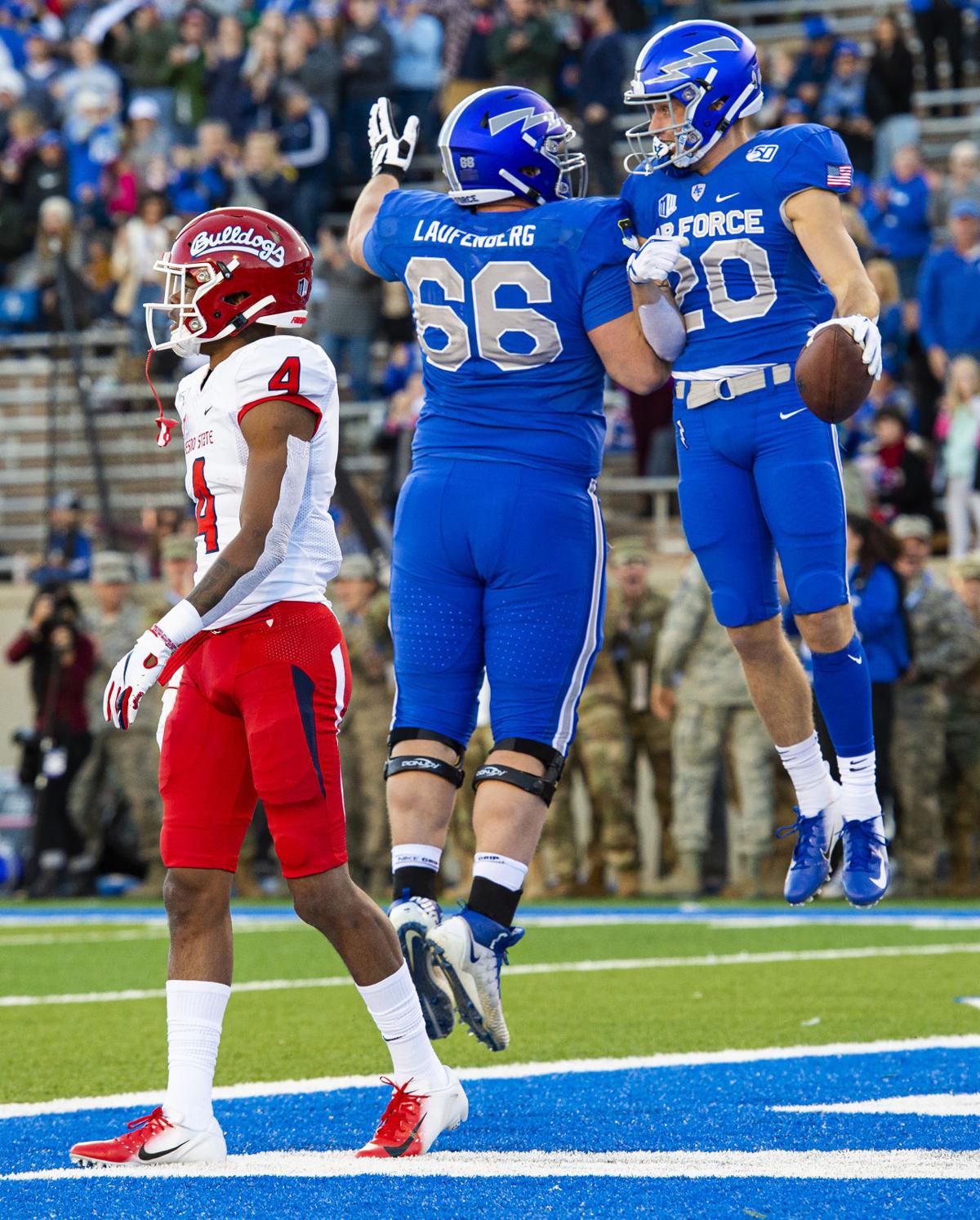 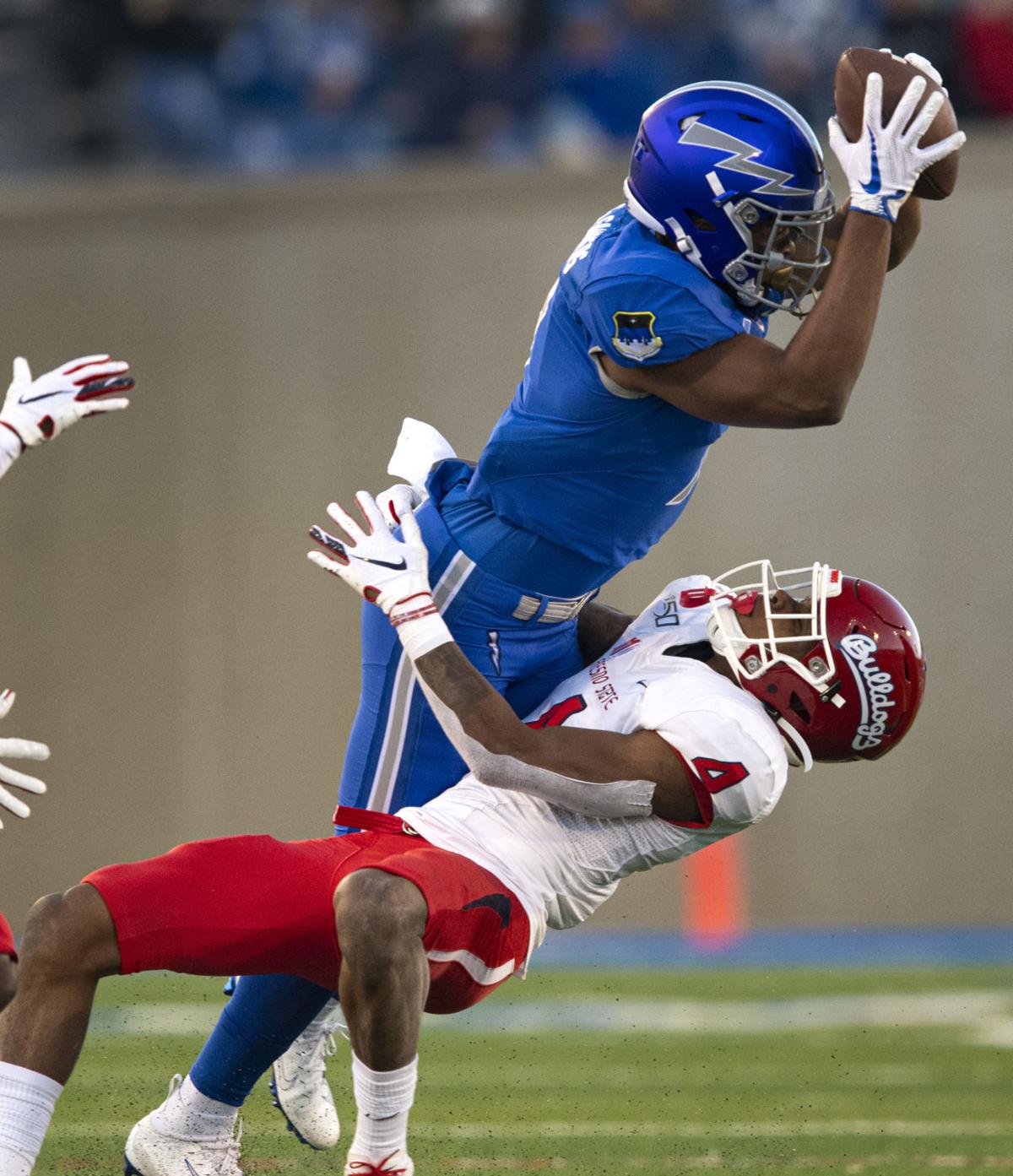 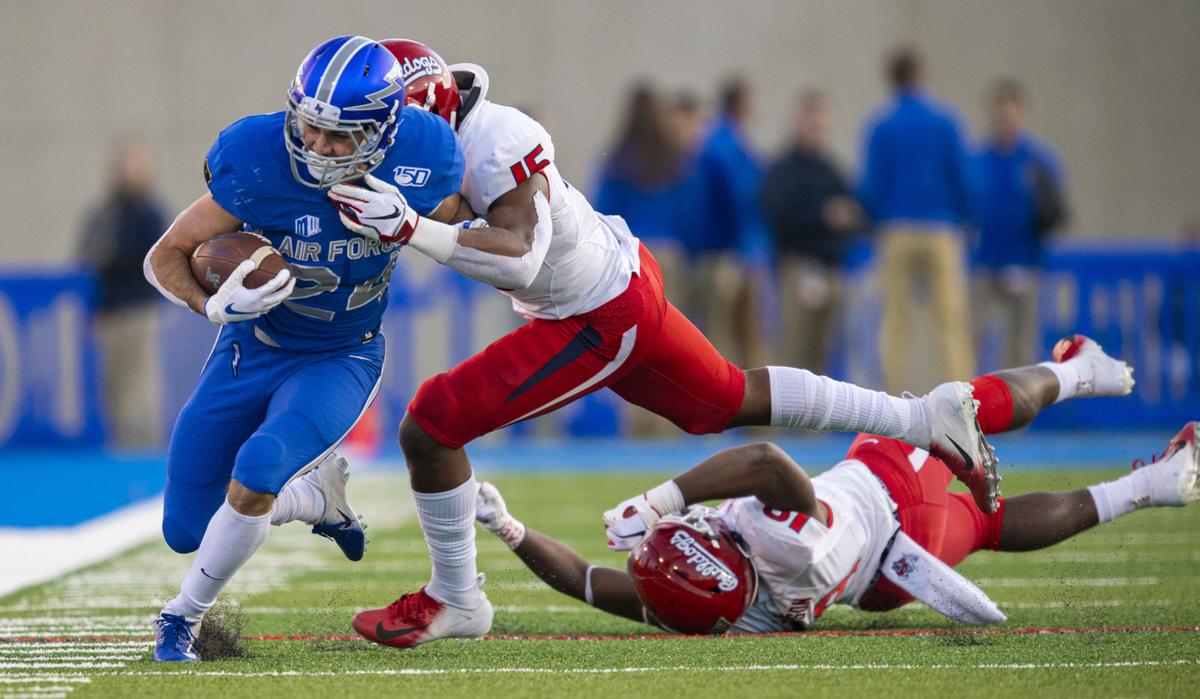 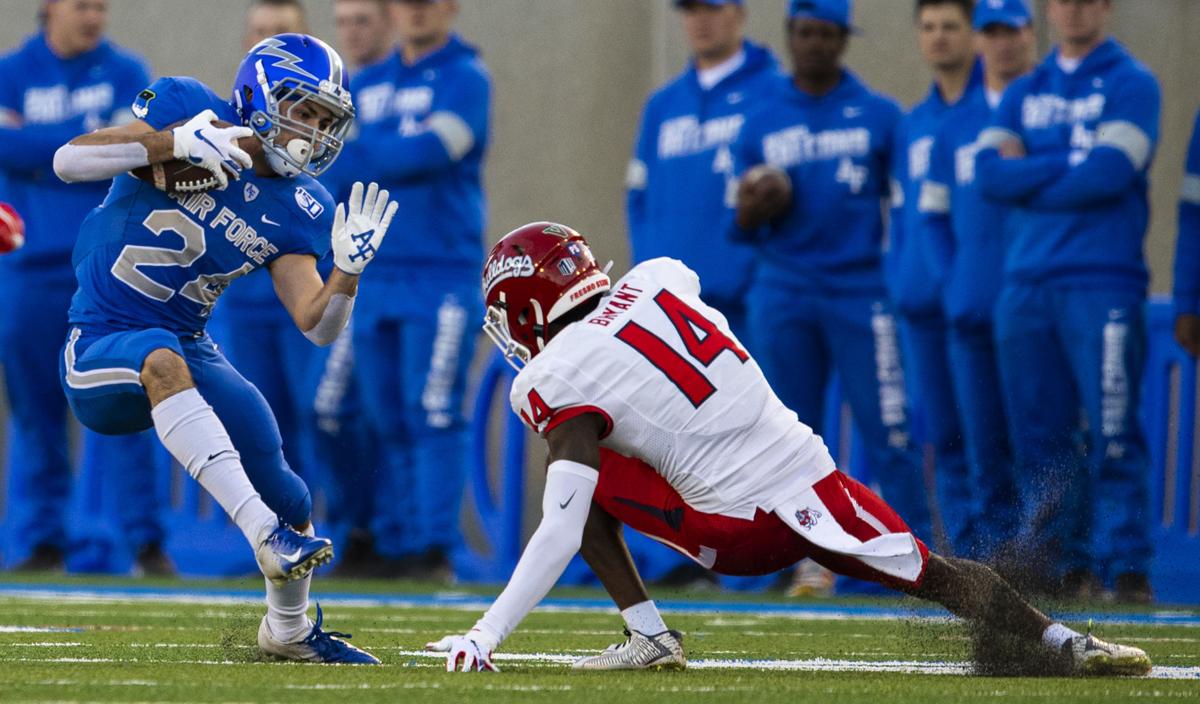 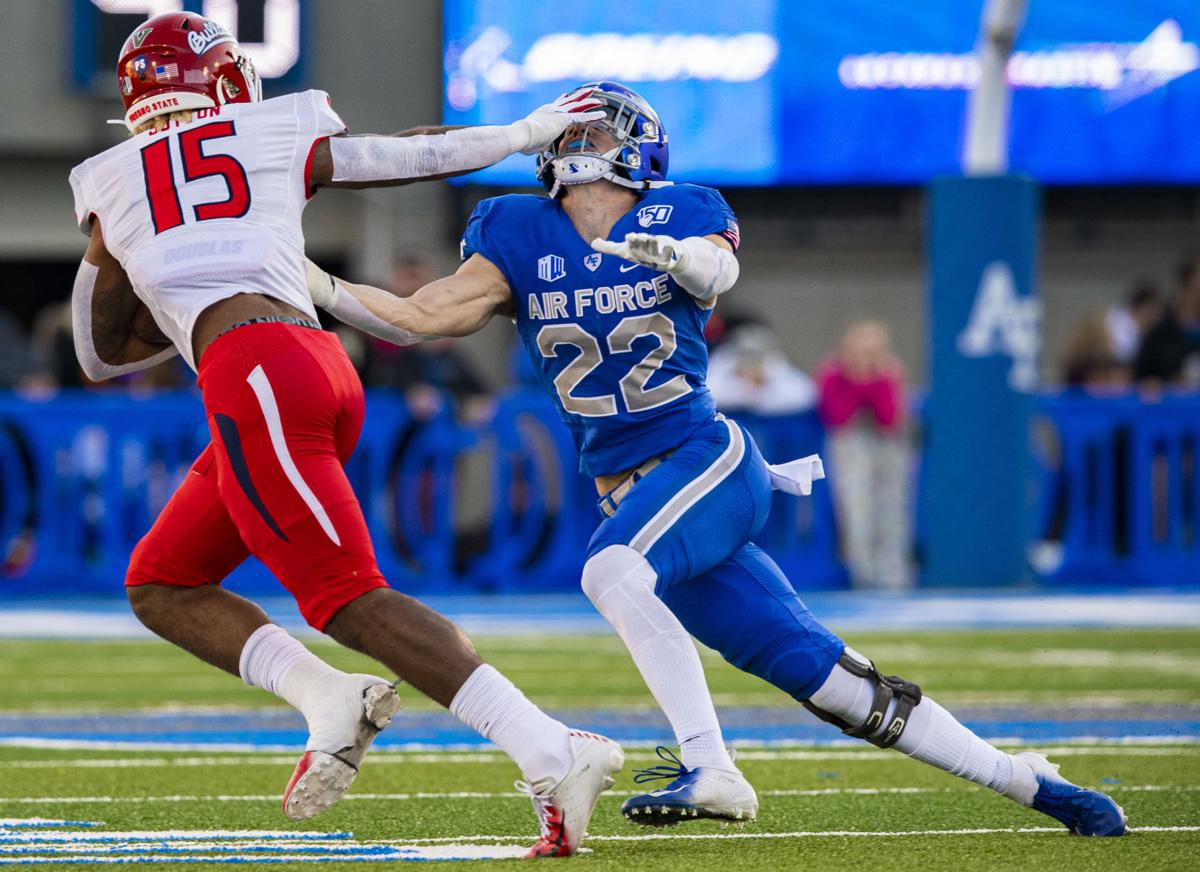 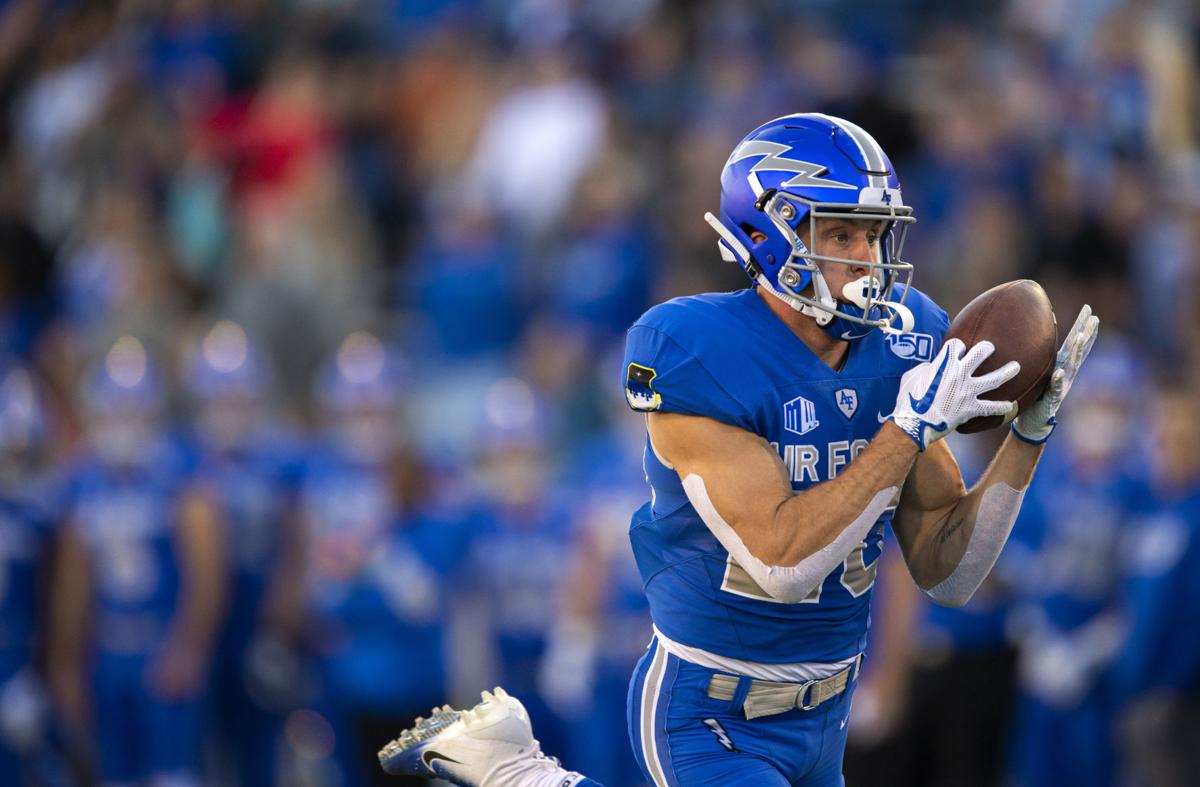 Air Force Falcons fullback Taven Birdow (33) leaps in the air before being tackles for a 5-yard gain by Fresno State Bulldogs linebackers Justin Rice (29) and Arron Mosby (15) during the second quarter at Falcon Field Saturday, Oct. 12, 2019. (The Gazette, Christian Murdock)

The opinions varied on what made the difference for Air Force’s defense in the second half on Saturday.

And, of course, they all pointed out that the offense put up long, clock-eating drives.

Whatever it was, the turnaround that led to Air Force’s 43-24 victory over Fresno State in an evening game at Falcon Stadium was nothing short of stunning.

The Bulldogs scored on all four of their first-half possessions, including touchdown-scoring drives of 85, 75 and 73 yards.

In the second half, the Falcons not only held the two-time defending West Division champions in the Mountain West scoreless, but they didn’t even allow them to cross midfield.

“Golly, it was the tale of two halves,” Calhoun said.

For Air Force’s offense, it was the tale of two weeks.

Last week, the Falcons uncharacteristically struggled in the running game in losing a heartbreaker at Navy – their second loss in three games.

This week, the run game returned to the tune 340 yards – including 198 in the second half. Sophomore fullback Duval Jackson came back after missing a week with a concussion and ran for 117 yards and a touchdown. Tailback Kade Remsberg ran 11 times for 89 yards and quarterback Donald Hammond III scored a pair of touchdowns, ran for a 2-point conversion and picked up four first downs on fourth-down plays.

“The push that (the offensive line) had was amazing,” Hammond said of the fourth-down plays.

Hammond completed 2-of-3 passes for 81 yards, including a 53-yard touchdown to Ben Waters on the opening possession.

At that point, it looked like Air Force couldn’t afford a possession that didn’t end in the end zone.

Fresno State quarterback Jorge Reyna went 17-for-18 passing in the first half for 190 yards and two touchdowns and the Bulldogs jumped to a 21-14 lead.

That it would ultimately end like their last visit to Falcon Stadium – where Fresno State led 14-0, only to lose 42-14 in 2015 – came down to Air Force’s ability to keep the pace and the Bulldogs’ inability to do so.

The play that seemed to change it was a sack from linebacker Kyle Johnson late in the second quarter. Fresno State had taken possession at the Air Force 40-yard line after the Falcons tried an onside kick. But Johnson’s sack stymied the drive and forced the Bulldogs to settle for a 47-yard field goal that put them in front 24-22 at halftime.

“It was the first time we did something good,” said Johnson, who later added an interception that he returned 24 yards for a touchdown early in the fourth quarter.

“I thought that was a huge stop,” Calhoun said.

Air Force possessed the ball for 24 minutes, 25 seconds of the 30-minute second half.

“I don’t think we changed too much other than our mentality,” Kauppila said. “Trust the guy next to us.”

Numbers that tell more of the story of Air Force's victory over Fresno State.