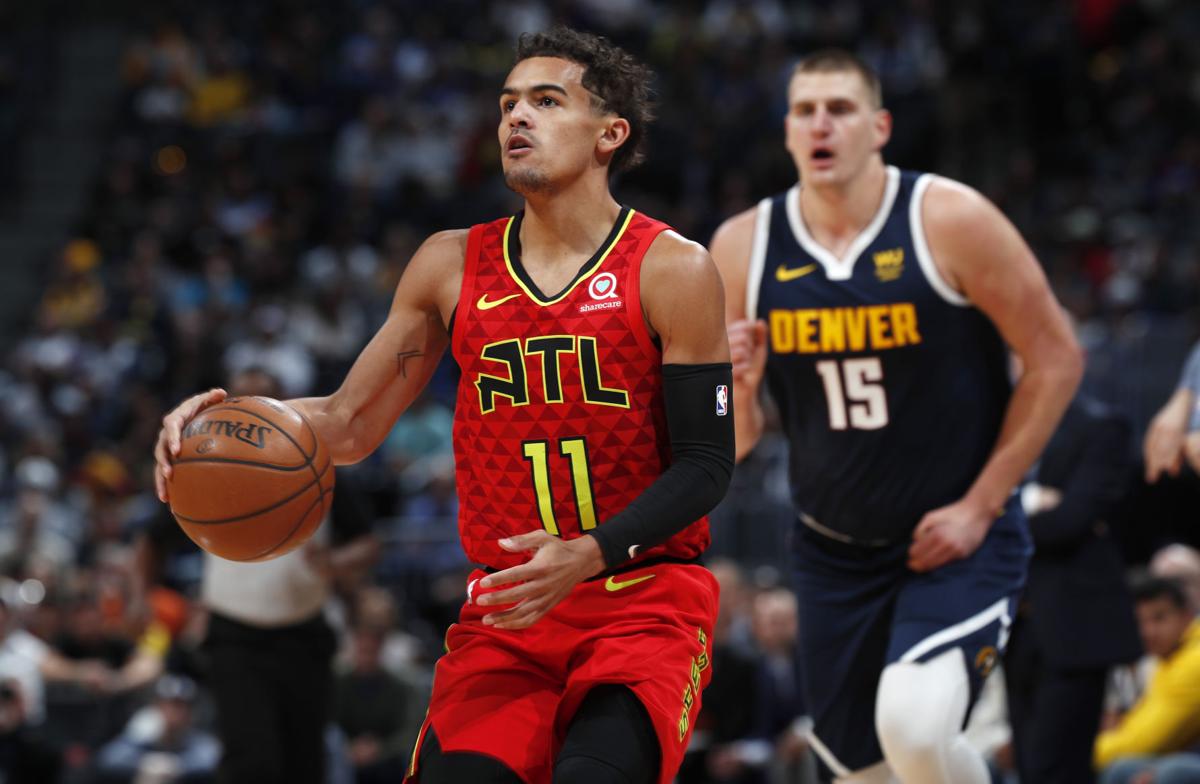 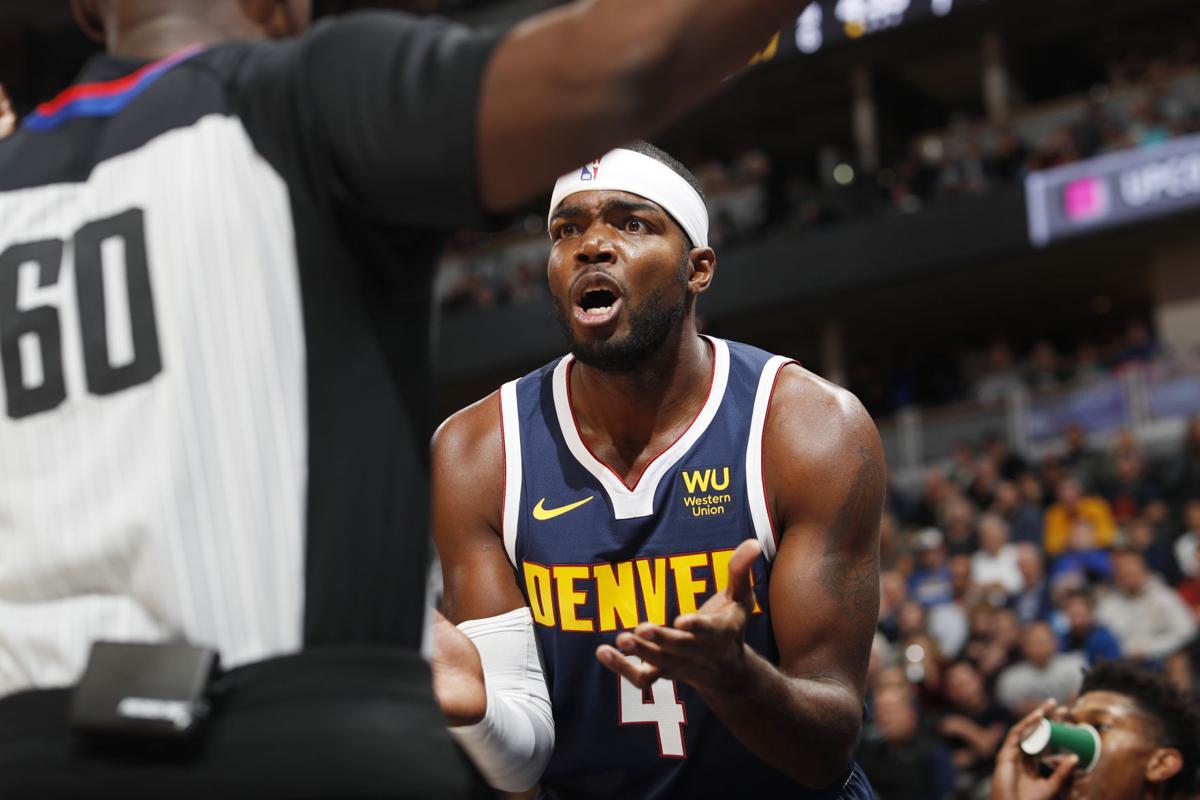 Denver Nuggets forward Paul Millsap, back, argues with referee James Williams, who had called Millsap for a foul during the first half of the team's NBA basketball game against the Atlanta Hawks on Tuesday, Nov. 12, 2019, in Denver. (AP Photo/David Zalubowski)

Denver Nuggets forward Paul Millsap, back, argues with referee James Williams, who had called Millsap for a foul during the first half of the team's NBA basketball game against the Atlanta Hawks on Tuesday, Nov. 12, 2019, in Denver. (AP Photo/David Zalubowski)

DENVER — Around the third quarter on Tuesday night, during the climactic scenes of the Trae Young Show, as Michael Malone called it, I glanced up to the rafters overhead at Pepsi Center.

Ah, there’s that timeless Fat Lever No. 12. And next to it, Doug Moe’s 432 (wins). Couldn’t spot the championship banner these Nuggets raised, though. Dang, did we all miss the ceremony?

“Maybe we thought it was going to be an easy night,” Malone said after the baby-faced Atlanta Hawks wiped the floor with Colorado's first NBA champs, the Nuggets, 125-121.

What’s that you say? The Nuggets haven’t won anything yet? Shoot, they’re sure playing like they're too cool for school, like last season’s 54 wins and playoff run to the West semifinals was enough.

It’s too heavy and too unfair to the Hawks to label the Nuggets’ performance as embarrassing. So Malone didn’t, and I won’t. The coach didn’t unload with one of his trademark — and far too common — postgame rants where he lights the tunnel at Pepsi Center on fire in a blaze of furor. Perhaps he’s only allowed one rant per 10 games, and he already shot his shot after a loss to the lowly Pelicans.

Malone kept this one pretty cool, pretty clean, so we’ll do the dirty work for him: When was the parade, fellas? These Nuggets look like they spent the offseason designing diamond-studded championship rings.

“I don’t know if our guys are coming to home games just expecting, hey, we’re going to win because we’re at home? Our fans are going to carry us? I don’t know what it is,” Malone said. “Tonight obviously wasn’t good enough.”

That net you heard was Hawks point guard Young swishing another 3. The NBA’s official player survey lists Young at 6-foot-1, and Young makes Allen Iverson look like a fullback. Then he bruised the Nuggets with 42 points and 11 assists to follow Michael Jordan and LeBron James as the third player with 40 and 10 before he turns 22. What a player. What a show. What were the Nuggets doing treating him like he was Julius Hodge or something? Denver’s defenders finally crept up to Young on his seventh and eighth 3-pointers, but the damage was done.

“He hit a couple shots tonight and our guys were surprised,” Malone said. “I don’t know what the hell they were surprised about.”

Oh, right. The Nuggets are 7-3. We’re complaining about free food here, and Hawks coach Lloyd Pierce offered solid perspective on the weird state of the Nuggets, who still rank among the top third of the NBA's youngest teams.

"It’s not about instant success. It’s about long-term success," Pierce told me. "I think the second and third year (of being a playoff team) is more and more difficult. Now you’re the guy being game-planned and schemed against.”

Still, despite the arrow pointing up, there's no joy in Nuggetsville. All-Star center Nikola Jokic smiled once that I saw on Tuesday, when a tiny girl reached out to give him a low-5 during halftime. Big fella needs a big hug.

Not yet worried about Jokic. He gets mopey sometimes, but his back-to-back game-winners to sink the Timberwolves and 76ers showed the world a few extra pounds is a beautiful thing. Plus, Jokic is not getting the overdue All-Star whistle yet. That should kick in soon. You hope.

But Jokic is not himself. Maybe it’s already having played 70 games this calendar year — NBA and the FIBA World Cup — that has the Joker going as Eeyore for Halloween. Maybe it’s his brother’s legal trouble hanging over his head, and who could blame him for that? Maybe it’s just one of those times when Jokic goes into a shell. Men are supposed to be more sensitive nowadays. Maybe he’s ahead of the curve.

“I don’t know,” Malone said when he was asked when the Nuggets plan on snapping out of this funk. “I guess we’ll have to wait and see. I don’t know. I just don’t know.”

The Hawks were 3-6 and thinking lottery coming in. They’re not the concern here. The concern here is how the Nuggets went from the sixth-best offensive rating last season to the seventh-worst rating this season. That’s no way to host a parade.

Good thing the Nuggets already held theirs. Invite the rest of us next time. We'd love to join.

It's not time for Drew Lock. But you can see Drew Lock's time from here, Paul Klee writes.