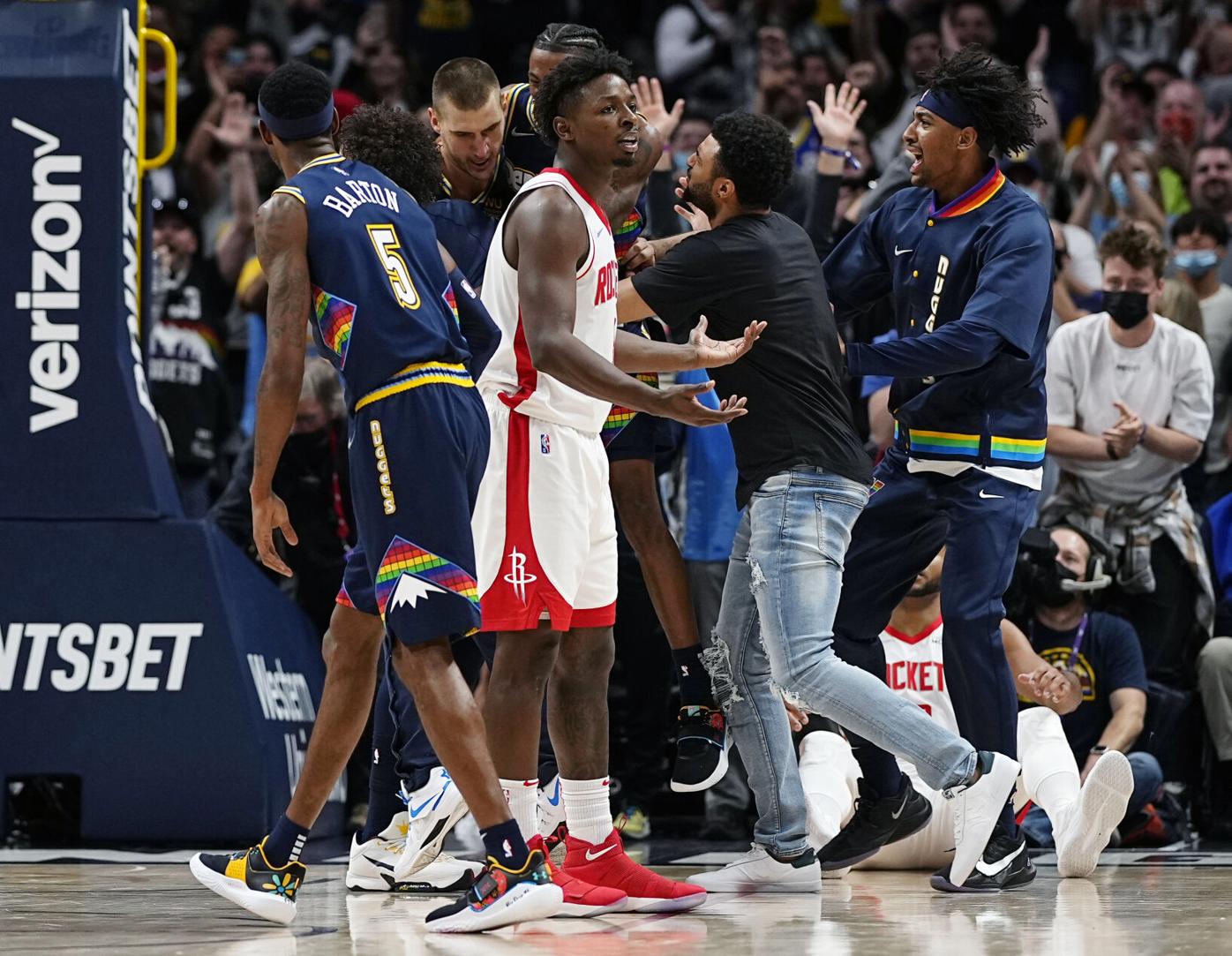 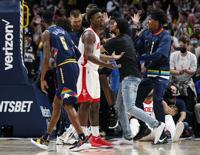 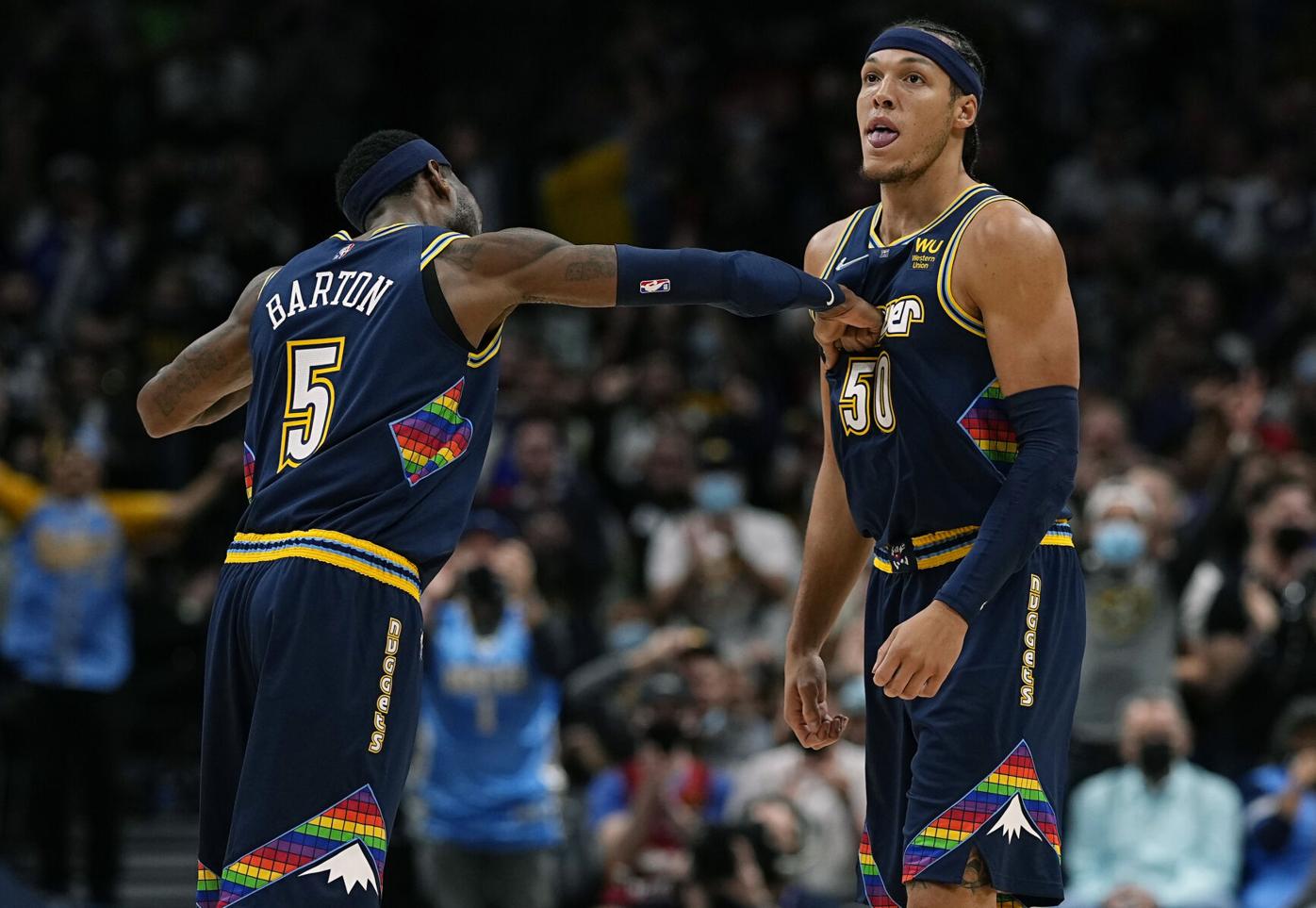 Denver Nuggets forward Aaron Gordon (50 is congratulated by teammate Will Barton (5) after a three point basket against the Houston Rockets during the fourth quarter of an NBA basketball game Saturday, Nov. 6, 2021, in Denver. (AP Photo/Jack Dempsey)

Denver Nuggets forward Aaron Gordon (50 is congratulated by teammate Will Barton (5) after a three point basket against the Houston Rockets during the fourth quarter of an NBA basketball game Saturday, Nov. 6, 2021, in Denver. (AP Photo/Jack Dempsey)

DENVER – A self-described average defender made a big play to secure the Denver Nuggets’ 95-94 win over the Houston Rockets on Saturday at Ball Arena.

“I know the system. I know the principles. I know the rules. I think at that point I’m really good,” Nikola Jokic said. “But the moving and the running and the jumping, I’m not as good.”

Jokic didn’t need to jump to make a defensive impact in the final seconds. After Christian Wood grabbed a defensive rebound with 9.7 seconds left, the Rockets raced up the court and opted not to call a timeout with the Nuggets’ defense adjusting on the fly.

“Just scrambling, trying to find men and make sure they don’t score a basket,” Will Barton III said of the final sequence.

Jokic and Aaron Gordon forced a driving Eric Gordon to pass to Jae’Sean Tate, who cut from the corner toward the hoop, in the final seconds. Tate went up, but Jokic poked the ball out on Tate’s way up to secure the win.

“I didn’t even jump. I think actually, if you see the block, it went up. I didn’t even block it,” Jokic said.

It worked all the same, allowing the Nuggets to win after trailing by five with less than three minutes to play. Aaron Gordon made it a two-point game with a 3-pointer from the right corner with 1:54 left.

“He’s been more aggressive, playing more confident and just giving us anything we need, whether it’s tough defense, whether it’s rebounding, whether it’s big shots like tonight,” Barton said. “He’s just doing a little bit of everything.”

Roughly a minute later, Gordon hit his second clutch 3 in the final minutes, a heavily contested look right in front of the Houston bench that put the Nuggets up a point with 51.4 seconds left.

“Those two back-to-back corner 3s really kind of saved the game for us,” Malone said.

The Nuggets and Rockets exchanged stops on the two following possessions, giving Houston the ball down one with 9.7 seconds left.

Jokic finished with a game-high 28 points to go with 14 rebounds, two assists, two steals and the game-winning block. Barton added 15 points for the Nuggets, while Aaron Gordon added 9.

Michael Porter Jr. played just over seven minutes for Denver. He appeared to tweak something when he went up for an uncontested layup early in the first quarter. He stayed in the game in the immediate aftermath but did not return once he left the court and headed to the locker room. He was initially deemed questionable to return with what was called “lower back soreness” before it was announced he would not return. Malone didn’t have much of an update postgame.

“Hopefully, it’s nothing serious and we can get him back, hopefully, next game,” Malone said. “I’ll have to wait and see what our trainers say.”

The Nuggets continue a five-game homestand, which started with Saturday’s win, when the Miami Heat visit Ball Arena on Monday. Denver will take a 5-4 record into their first matchup with the Heat thanks to an above-average defensive play from a player known for his offense.

“I think I’m average,” Jokic said of his defensive ability. “I’m not crazy good. I’m not really bad at it.”

Some members of the NBA fraternity have spoken out against the NBA’s updated interpretation of the rules when it comes to drawing shooting fouls.