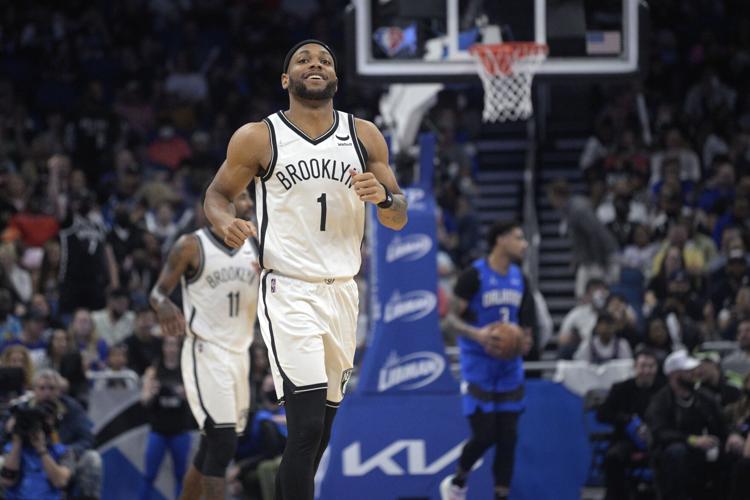 Brooklyn Nets forward Bruce Brown (1) runs up the court during the first half of an NBA basketball game against the Orlando Magic, Tuesday, March 15, 2022, in Orlando, Fla. (AP Photo/Phelan M. Ebenhack) 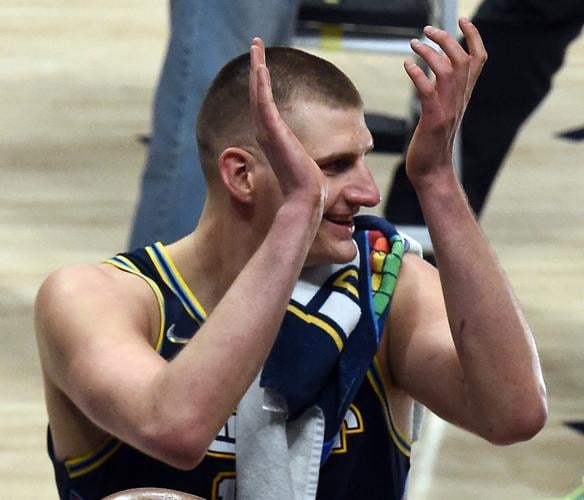 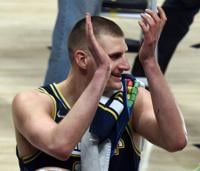 Nuggets’ Nikola Jokic applauds the crowd as he leaves the arena, but with a big smile this time, because the Nuggets were able to stay alive in the first round of the NBA playoffs.

Brooklyn Nets forward Bruce Brown (1) runs up the court during the first half of an NBA basketball game against the Orlando Magic, Tuesday, March 15, 2022, in Orlando, Fla. (AP Photo/Phelan M. Ebenhack)

Nuggets’ Nikola Jokic applauds the crowd as he leaves the arena, but with a big smile this time, because the Nuggets were able to stay alive in the first round of the NBA playoffs.

DENVER • The Nuggets roster next season is nearly complete a day into free agency.

The addition of 25-year-old wing Bruce Brown on Friday morning brought the Nuggets up to 14 players under contract next season. The 6-foot-4 Brown spent the first two years of his career with the Pistons before averaging 8.9 points and 5.1 rebounds over the last two seasons with Brooklyn. He reportedly signed the taxpayer midlevel exception, which is available to teams above the luxury tax.

Denver’s 15th and final spot could be spoken for.

Since free agency opened Thursday afternoon, the Nuggets also locked down Nikola Jokic for the foreseeable future with a five-year supermax reportedly worth up to $270 million. That would be the richest contract in NBA history. Denver also signed veteran center DeAndre Jordan and converted Davon Reed’s contract to a standard deal after he played last season on a two-way contract.

The 33-year-old Jordan averaged 4.6 points and 5.8 rebounds in 16 games for Philadelphia last season after we was waived by the Lakers.

Austin Rivers, Facundo Campazzo, DeMarcus Cousins and Markus Howard remain unrestricted free agents after spending last season with the Nuggets. Bryn Forbes is reuniting with Tim Connelly, Denver's former president of basketball operations, in Minnesota, according to The Athletic. Connelly acquired Forbes in a trade midway through the season. Forbes averaged 8.6 points in 35 games with the Nuggets.

The addition of Brown brings the Nuggets projected team salary to roughly $160 million, which is $10 million more than the reported luxury-tax figure. Contracts cannot formally be signed until the moratorium period ends on July 6.

First-round draft picks Christian Braun and Peyton Watson are listed since their salary number is mostly set, but Ismael Kamagate is not given the non-guaranteed nature of second-round contracts.

Here’s how the 15 players under contract for next season break down by position.

Jamal Murray. Next season will be the third since Murray signed a five-year extension worth $158 million. He’ll make $31.6 million in 2022-23, according to spotrac.com.

Bones Hyland. After earning All-Rookie honors last season, Hyland will make $2.2 million in his second NBA campaign. The Nuggets have team options to keep the fan favorite in Denver for his third and fourth professional seasons.

Ish Smith. The veteran guard’s contract worth $4.7 million for next season becomes fully guaranteed on Friday. The expectation was that the Nuggets intended to keep Smith around after Wednesday’s trade. He’s set to be an unrestricted free agent next offseason.

Collin Gillespie. The undrafted rookie out of Villanova agreed to a two-way contract with the Nuggets for next season. He attended the introductory press conference of the three draft picks and posed for photos with his Nuggets jersey but will spend a good chunk of his rookie season with the Grand Rapids Gold.

Kentavious Caldwell-Pope. The upcoming season is the final one of a three-year contract with $39.1 million the experienced shooting guard originally signed with the Lakers. He’ll play 2022-23 on an expiring contract worth just over $14 million.

Christian Braun. The rookie will make in the neighborhood of $2.8 million in line with the NBA’s rookie pay scale for the 21st overall pick. The Nuggets will have team options to keep the rookie in Denver through the 2025-26 season.

After joining the Nuggets last year on a two-way contract, Reed agreed Thursday to a two-year contract to stay in Denver.

Aaron Gordon. Arguably Denver’s most important defensive piece, Gordon signed a four-year extension with the Nuggets before last season. He’s set to make just under $20 million next year before getting incremental raises the two following seasosn. The final year of his contract is a player option worth $22.8 million in 2025-26.

Peyton Watson. The difference between the 21st and 30th pick is worth about $600,000 for Denver’s rookies next season. The Nuggets can offer Watson contract anywhere between 20% more or 20% less than his pay-scale value of $2.2 million.

Michael Porter Jr. The first year after he signed a rookie maximum extension did not go how Porter or the Nuggets would have hoped. After missing much of last season and undergoing a third back surgery, Porter is set to make $30.1 million next season. His salary jumps as high as $40.8 million for the final season of his current deal in 2026-27.

Jeff Green. The Nuggets lured the veteran to Denver with a multiyear contract, something that’s been a rarity in recent years for the veteran forward. The two-year deal he signed for $9 million last year expires after this season.

Zeke Nnaji. The Nuggets exercised their first team option on the stretch four before last season. He’ll make $2.6 million this season, and Denver’s front office will again have the option to retain Nnaji for $4.3 million next season.

Nikola Jokic. The upcoming season, the last of his five-year rookie maximum extension, will see the back-to-back Most Valuable Player make $32.5. Members of the Nuggets’ front office have planned to make a trip to Serbia in the coming days to formally offer the superstar the supermax extension.

Jordan signed a one-year veteran's minimum with Denver, which is expected to be worth roughly $3 million. He played last season under a $2.6 million contract with the Lakers before he was waived, eventually signing with the 76ers.

Nuggets to trade Will Barton, Monte Morris to Washington Wizards

Calvin Booth's not messing around.