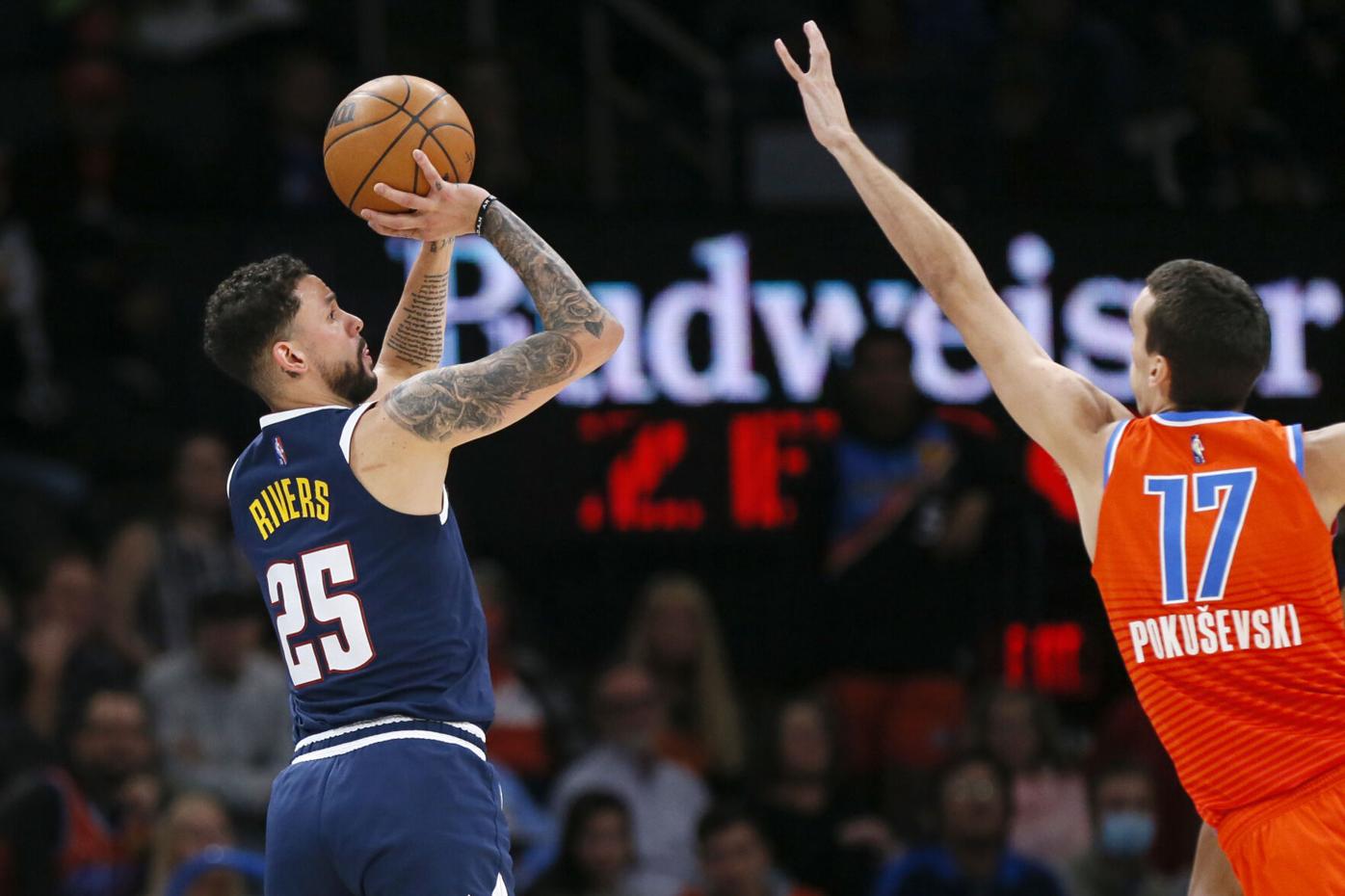 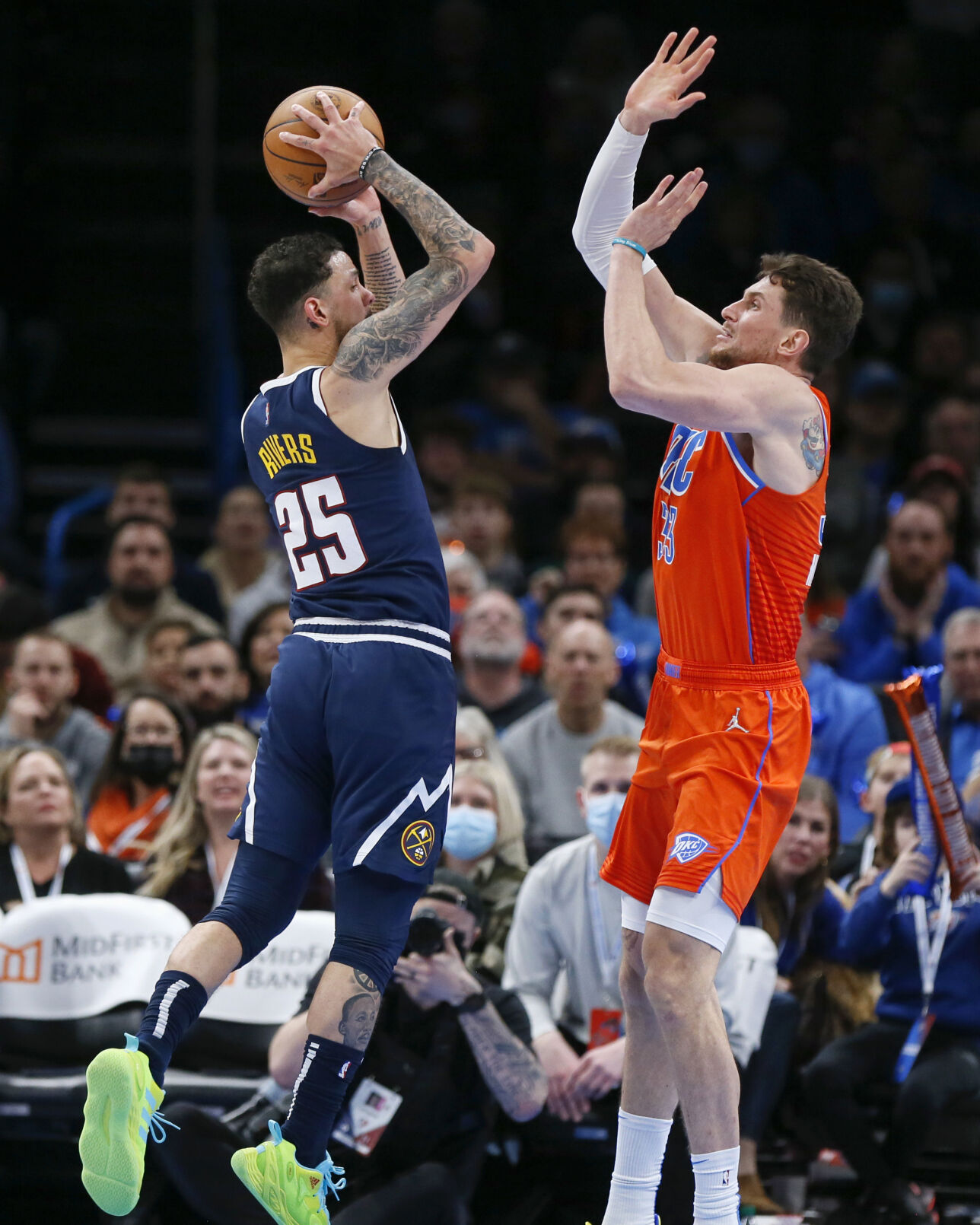 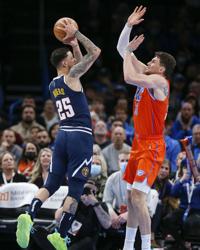 The six 3-pointers served as the foundation of Austin Rivers’ best night of the season, but one last layup served as a nice finishing touch on the Denver Nuggets’ 99-95 win Sunday in Oklahoma City.

With the Nuggets and Thunder tied at 93 thanks to the veteran guard’s final 3-pointer with 2:59 left to decide a winner, Rivers caught the ball in front of the Thunder bench. Instead of hoisting his 10th attempt from deep, Rivers attacked Josh Giddey’s close out with two dribbles to his right and an up-and-under layup that he spun off the backboard and in, giving the Nuggets a two-point lead with 2:22 remaining.

“I love being in the game (at the) end of the game,” Rivers said after playing 32 minutes in the win. “It’s my favorite thing to do just when the pressure is on … every play matters. It’s fun to be in.”

Denver led the rest of the way and improved to 20-18 behind free throws from Nikola Jokic and Will Barton III in the final 40 seconds. Jokic and Rivers led the Nuggets with 22 points apiece, while Jeff Green and Barton added 16 and 14 points, respectively.

Luguentz Dort led the Thunder with 14 points, while Rivers helped the Nuggets hold Oklahoma City star Shai Gilgeous-Alexander to eight points, four of which came from the free throw line.

“He was really good defensively, too,” Jokic said. “It was not just an offensive night.”

The Thunder were the latest team to send aggressive double teams whenever Jokic got the ball in the post, but he still added 18 rebounds, eight on the offensive glass, and six assists.

“He does it every game,” Rivers said. “Double team, triple team, I just don’t know if anybody can stop him.”

Jokic’s final assist led to Rivers’ tying 3, while the layup was a product of Monte Morris making an extra pass after Jokic passed the ball out of the post.

“They’re basically daring us to make shots,” Malone said. “Tonight, it was great that we made 13 3s to try to keep them honest.”

Barton hit his first two 3-pointers and added a layup, scoring eight of his points as the Nuggets opened the game on a 22-4 run. The Thunder trimmed Denver’s lead to 13 by the end of the first quarter and closed within eight in the second quarter. The Nuggets led 61-49 at halftime with Rivers scoring 14 of his points and hitting four of his 3-pointers in the first two quarters.

“We did a good job of generating really good 3s. A lot of drive-and-kick examples where we got in, collapsed the defense, we moved off penetration, and we made an on-time, on-target pass that led to an uncontested 3,” Malone said of the first half. “That’s good basketball. In the second half, we started holding the ball. We didn’t move. We didn’t drive, collapse and kick, and that led to poor possessions.”

Oklahoma City surged early in the third and eventually took its first lead in the final minutes of the quarter. Rivers’ fifth-consecutive made 3 gave the Nuggets a four-point lead to start the fourth. The Nuggets quickly increased the lead to eight behind consecutive buckets from Jeff Green, but the Thunder defense held the Nuggets without a point for nearly four minutes. Oklahoma City regained the lead and had a five-point advantage inside the final four minutes before Rivers erased the deficit with his final 3 and the last layup.

“I think the big thing with Austin is sometimes you’ve just got to catch and shoot instead of holding and sometimes dancing with the ball,” Malone said. “He did that tonight. When he was open, he shot the ball, and he shot it extremely efficiently for us.”

The six made 3s on nine attempts helped Rivers finish with his best scoring night of the season and second-most in a Nuggets uniform. Rivers dropped 25 points on the Knicks late last season when injuries decimated Denver’s backcourt and allowed him to go from free agent to a big part of Malone’s playoff rotation. His role has varied this season with Denver again dealing with rashes of injuries and illness, but Rivers showed Sunday he’s capable of contributing in crunch time.

“It feels good, obviously, when it works out and you go out there and you help your team, because we’ve got a deep team, man," Rivers said. "We’ve got a lot of guys that can finish games. That’s just the reality of the situation. I just got to be ready.”

The Denver Nuggets shook up their roster before Sunday's game in Oklahoma City.