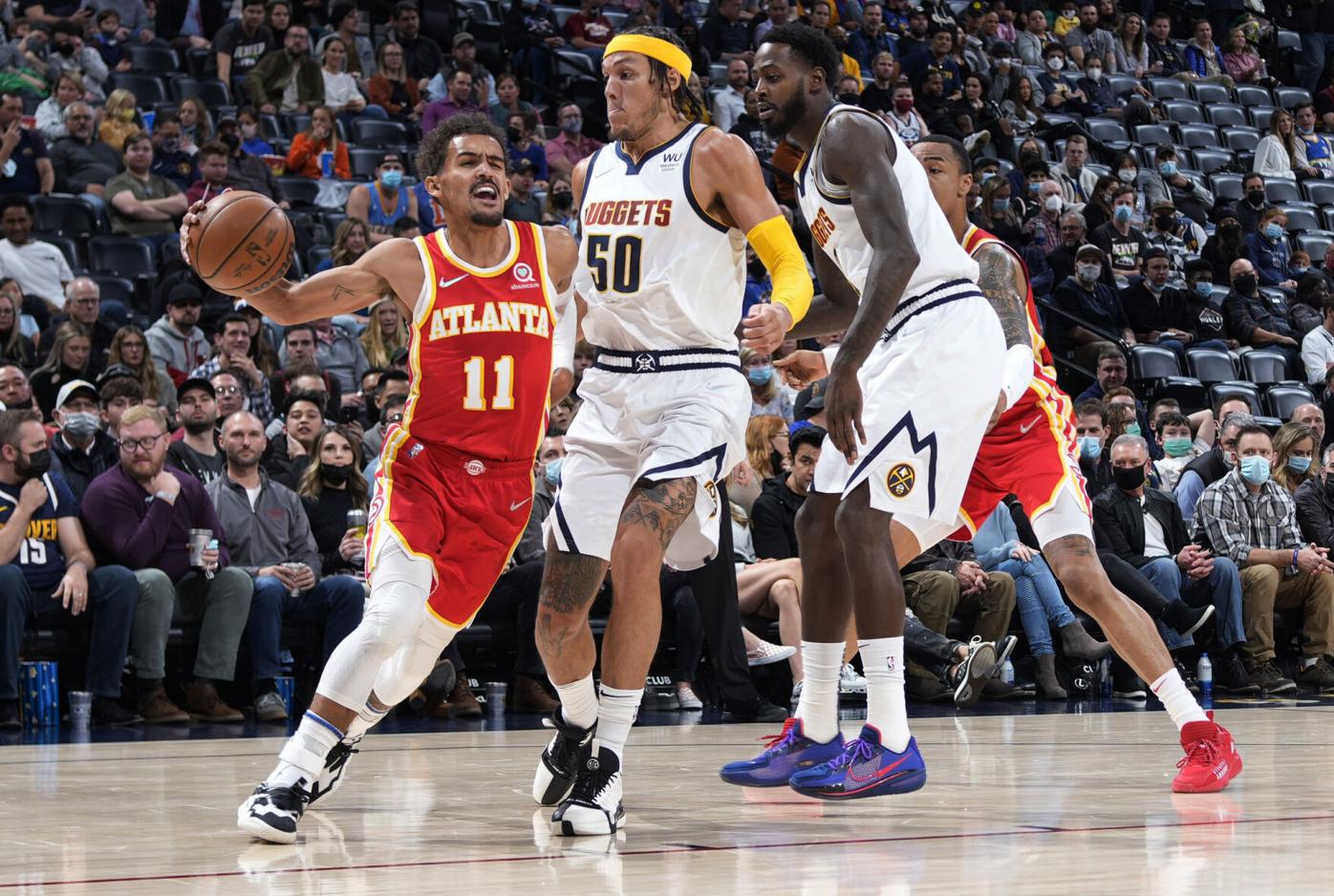 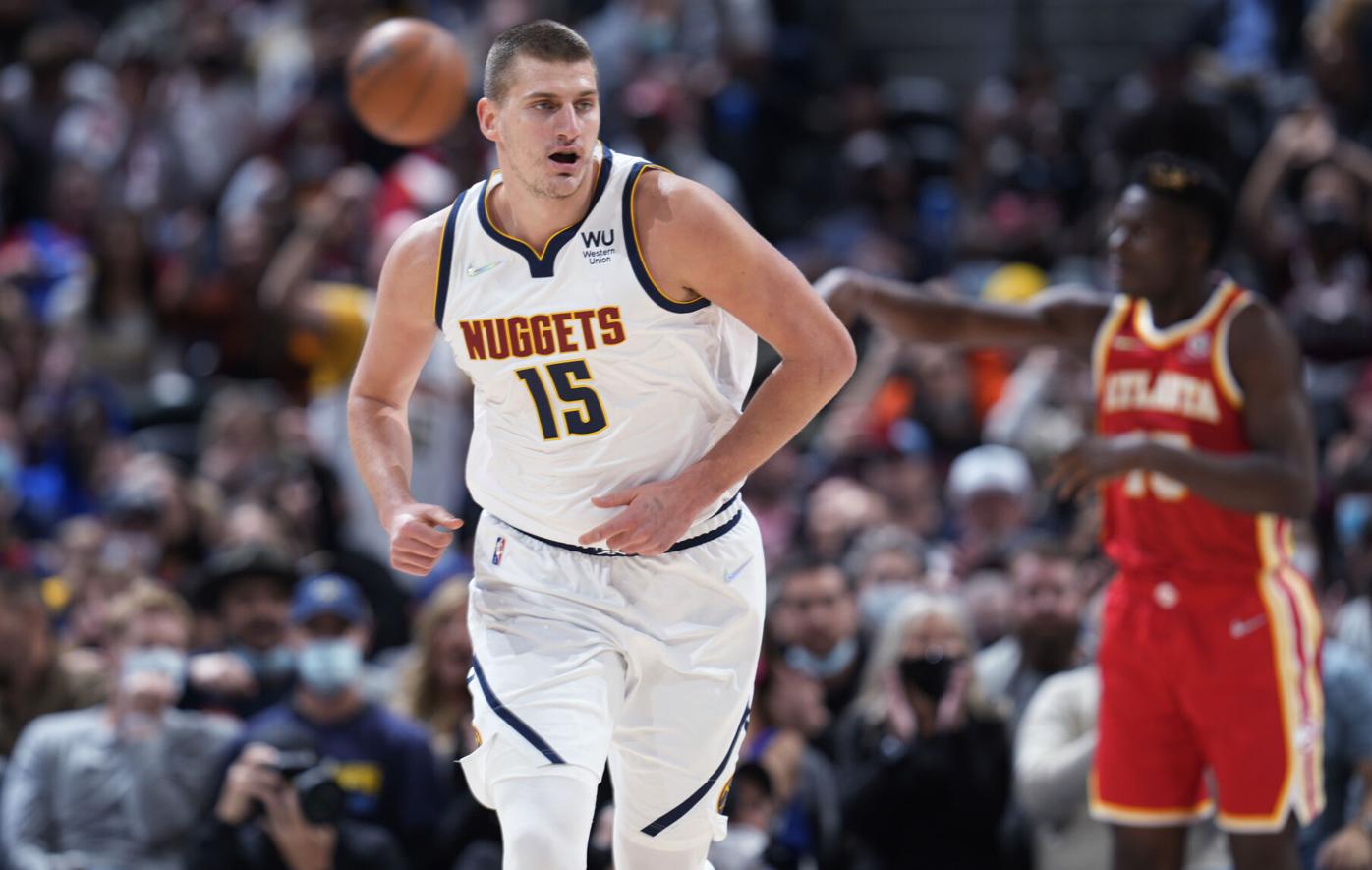 Denver Nuggets center Nikola Jokic heads to the other end of the court after hitting a basket against the Atlanta Hawks during the first half on Nov. 12 in Denver. (AP Photo/David Zalubowski)

Denver Nuggets center Nikola Jokic heads to the other end of the court after hitting a basket against the Atlanta Hawks during the first half on Nov. 12 in Denver. (AP Photo/David Zalubowski)

DENVER – Aaron Gordon got it done on both ends Friday at Ball Arena.

Gordon scored a team-high 23 points, making 7 of 11 shots from the field, 3 of 5 from 3-point range and all six of his free throws.

“You look at the stat sheet, and Aaron Gordon was just incredible across the board,” Malone said before running down Gordon’s shooting numbers.

“That’s after guarding Trae Young all over the place. That’s not easy to do. When you’ve got a guard at that level, that takes a lot out of you, so that’s even more impressive, what he was able to do on the offensive end.”

Malone wasn’t the only one to notice Gordon’s importance to the second-ranked defense in the NBA.

“He is guarding every best player on the other team,” Nuggets star Nikola Jokic said. “That’s a tough job, especially the guys who are handling the ball a lot in the pick-and-roll. He’s going to get screened all night, but he’s doing a great job.”

“I learned early that you need to find a niche to be in this league,” Gordon said. “Defense was my niche.”

Jokic recorded his second triple-double in as many games played, finishing with 22 points, 19 rebounds and 10 assists.

“It just makes your life so much easier – point blank, period. Man, that guy is special, man,” Nuggets rookie Bones Hyland said. “He just makes the game so easy. He finds you at the right time. He finishes so easy. He shoots the ball so easy. … Just to play alongside him, I feel very blessed, for sure.”

It was the 59th triple-double of Jokic’s career, which tied him with Larry Bird for eighth all-time.

“My name being next to him means a lot, of course, but I’m just trying to be the best I can be. I have a couple of years left.”

Jeff Green added 16 points, while Hyland and PJ Dozier led Denver’s bench with 15 and 12 points, respectively. It was the second consecutive game Hyland set a new career-high after scoring 12 points on Wednesday.

“Bones has extreme confidence,” Malone said. “He shoots into a big basket, and he’s not afraid. I think that’s what the veteran players love about him is that he’s talented, he’s young, he’s still a work in progress, but he competes.”

After Atlanta closed within nine points early in the fourth quarter, Hyland hit consecutive 3-pointers, prompting an Atlanta timeout. The rookie took his time getting back to the huddle, as he engaged an energetic crowd.

“It was so fun tonight,” Hyland said. “I had a blast out there.”

The Nuggets scored the first seven points of the second half to create a 10-point lead, an advantage they took to the fourth quarter. Hyland’s surge, coupled with late buckets from Gordon and Jokic finalized the Nuggets’ fourth consecutive win.

The 8-4 Nuggets will look to go undefeated over a five-game homestand Sunday against the Portland Trail Blazers.

“We would not be where we’re at if Aaron Gordon was not playing defense at the level he’s played at against the quality opponent he’s had to guard,” Malone said.