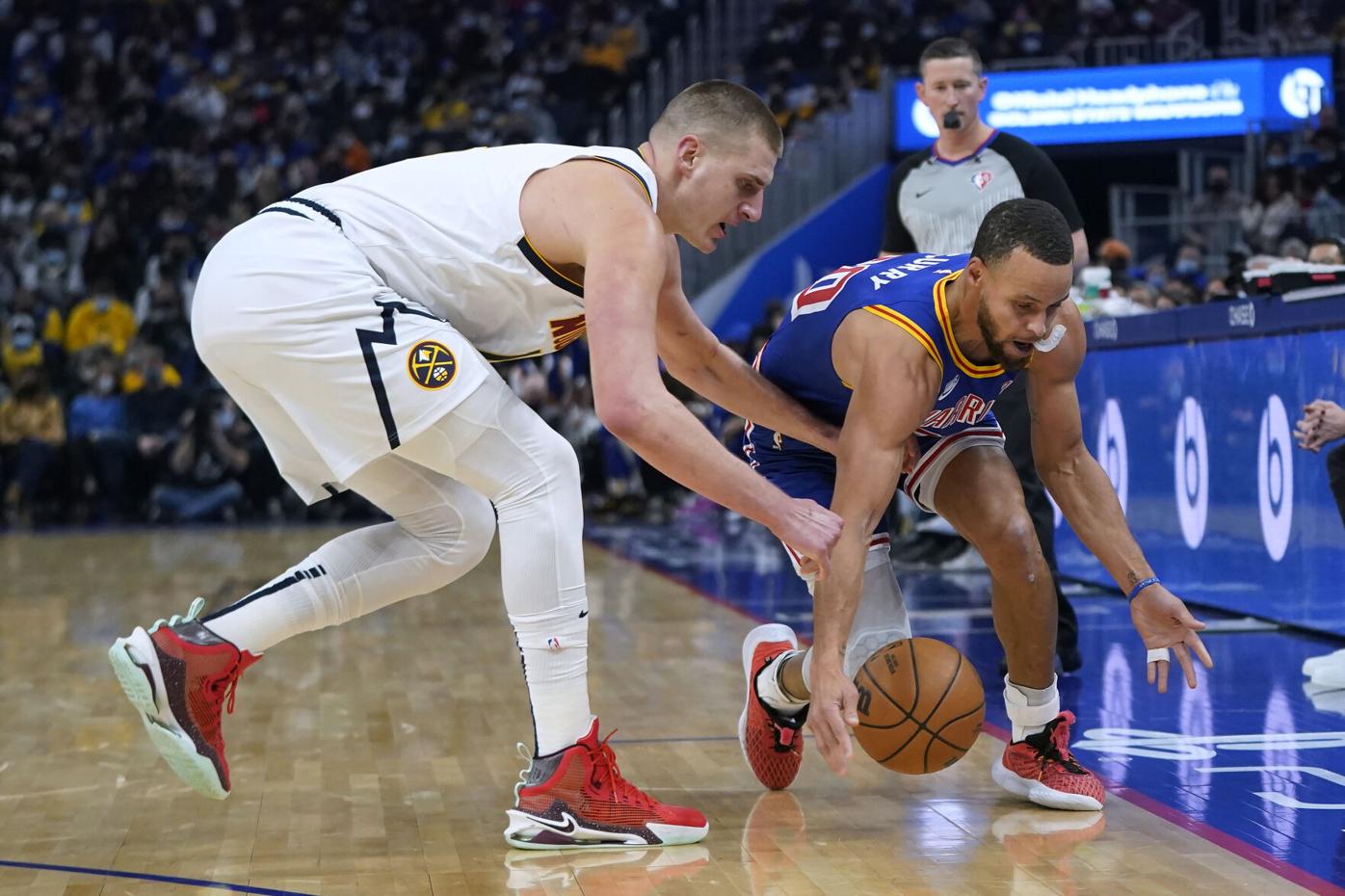 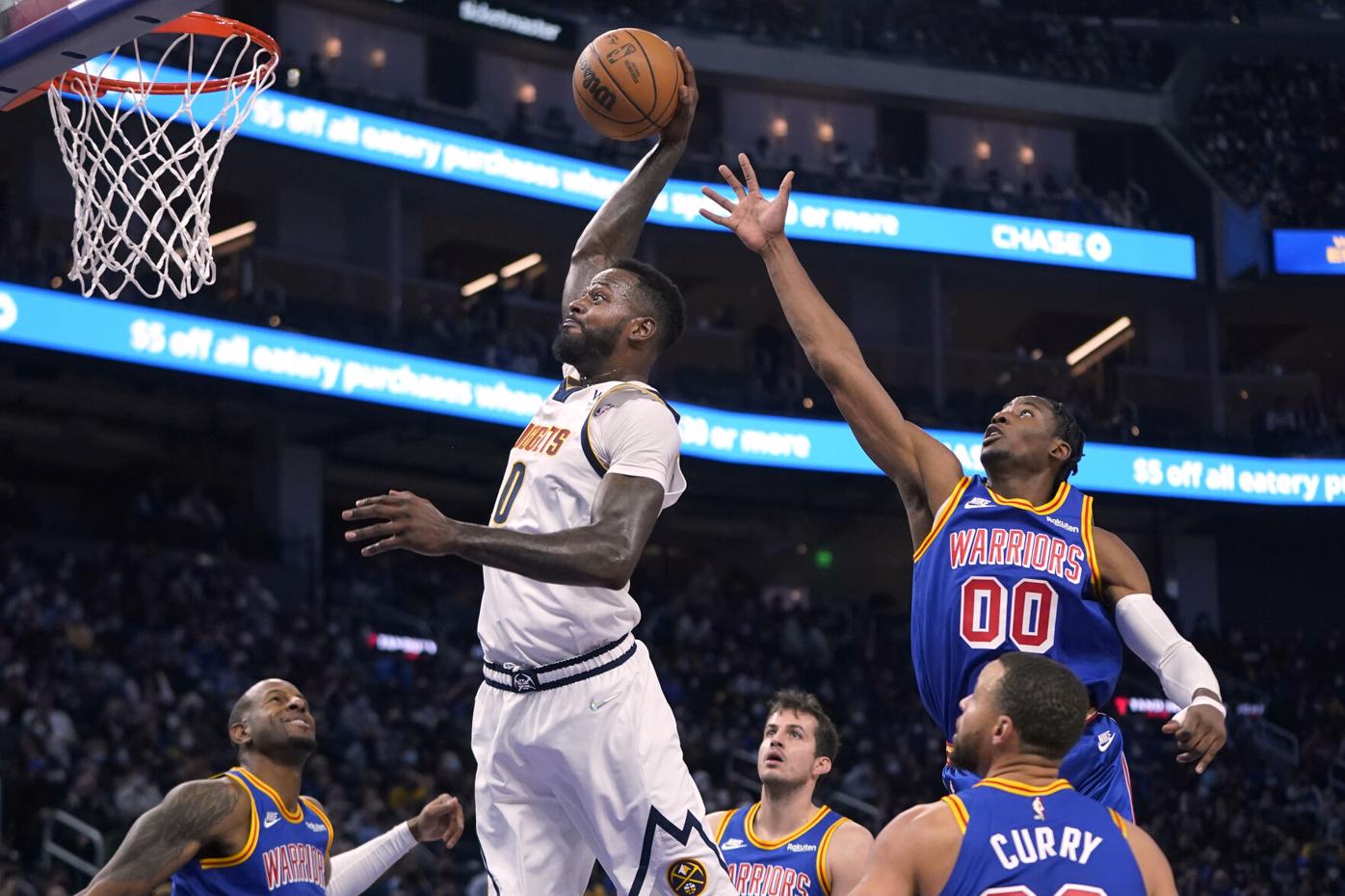 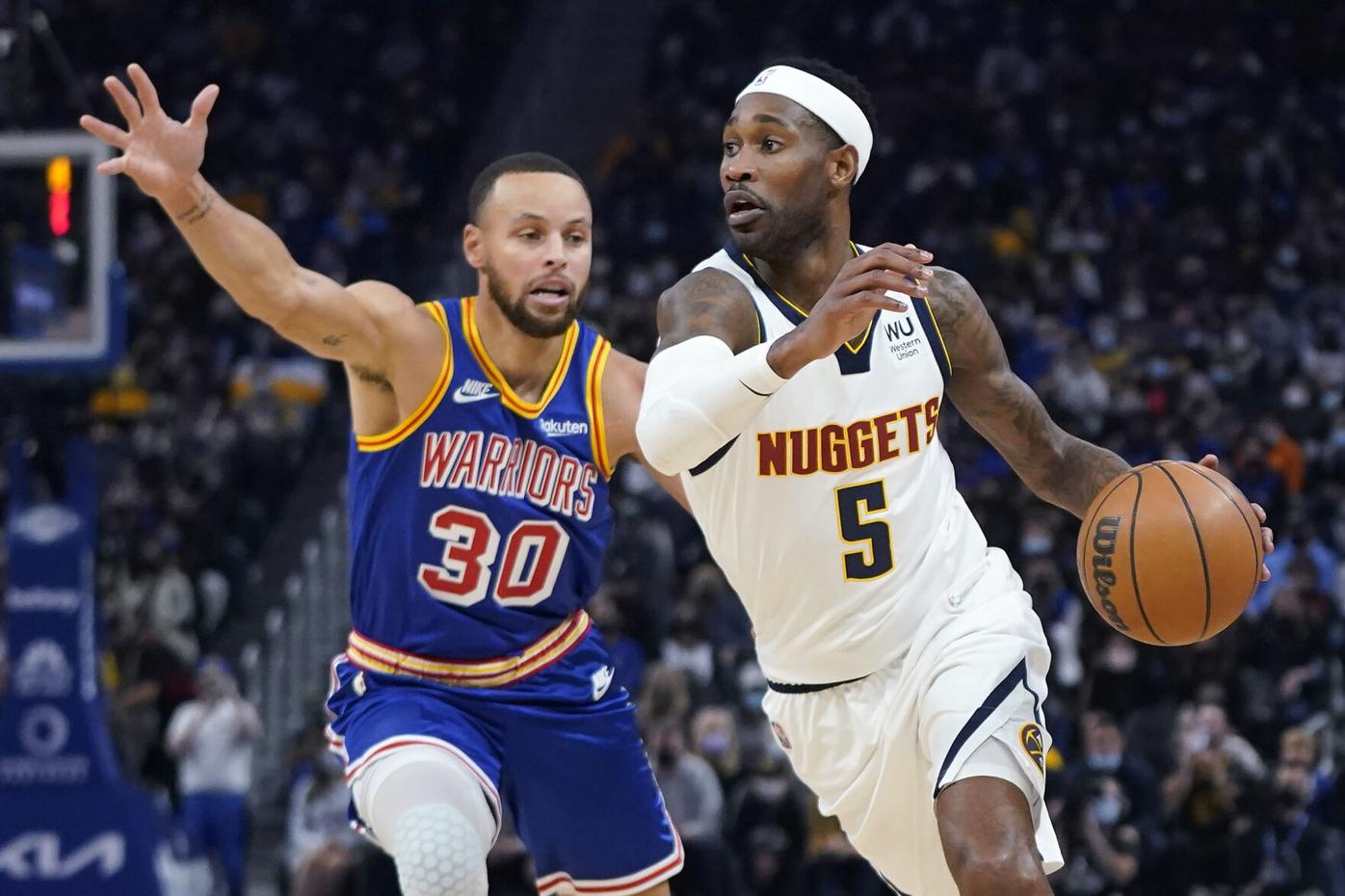 Denver Nuggets forward Will Barton (5) drives to the basket against Golden State Warriors guard Stephen Curry (30) during the first half of an NBA basketball game in San Francisco, Tuesday, Dec. 28, 2021. (AP Photo/Jeff Chiu)

Denver Nuggets forward Will Barton (5) drives to the basket against Golden State Warriors guard Stephen Curry (30) during the first half of an NBA basketball game in San Francisco, Tuesday, Dec. 28, 2021. (AP Photo/Jeff Chiu)

Three quarters of dialed-in defense coupled with one final example of game-plan discipline delivered the Denver Nuggets an 89-86 win over the Golden State Warriors on Tuesday in San Francisco.

After stingy defense on Warriors star Stephen Curry helped the Nuggets lead by 24 in the second quarter, the Nuggets needed four points from Will Barton III in the final minute, a block from Nikola Jokic with 3.7 seconds left and one final denial of Curry to hold off the Warriors.

Jokic’s block on Golden State rookie Jonathan Kuminga was scooped up by Facundo Campazzo, who was fouled and split a pair of free throws to put the Nuggets up 3 with 2.4 seconds left. When Curry cut toward the 3-point line after a Warriors timeout, he found himself sandwiched between Campazzo and Barton, who drifted off Andre Iguodala. Iguodala’s in-bound pass went to Kevon Looney on the verge of the 3-point line. Looney, who missed the only 3 he’s taken this season, flipped it right back to Iguodala, a 22% 3-point shooter, who air-balled the tying shot.

“(We) took away Steph coming to the ball, which was the plan,” Nuggets coach Michael Malone said. “Iguodala broke loose, found a crack in that and obviously got off almost a desperation 3 at the buzzer. Our guys executed the defensive coverage on that last play very well.”

Curry led all scorers with 23 points despite a slow start, and Andrew Wiggins chipped in 21 points.

Jokic led the Nuggets with 22 points to go with 18 rebounds, five assists, four steals and one big block. Barton finished with 21 points.

With Monte Morris among Denver’s eight inactive players and Barton moved to small forward in Aaron Gordon’s absence, Campazzo and Austin Rivers started in Denver’s backcourt opposite of Curry. The Nuggets held Curry, who was tasked with carrying Golden State with Draymond Green and Klay Thompson among a handful of Warriors unavailable, without a bucket until  2:08 left in the second quarter.

“Whoever was guarding him was doing a really good job. We were really locked in, especially the first half I think we were phenomenal,” Jokic said.

Curry turned it over three times in the first three minutes, helping the Nuggets jump out to an early 10-0 advantage. Denver used a 13-0 run to close the quarter to lead 31-16 to start the second. Barton made his first three 3-point attempts, including a four-point play, and scored 14 of his points in the first quarter.

The Nuggets stretched the lead to 20 in the second quarter behind seven quick points from Bones Hyland and a Jeff Green 3-pointer and led 60-36 at halftime. Curry had just two points and four turnovers to start the third quarter.

“It’s never one person with a great player, and obviously Steph is one of the greatest to ever do it,” Malone said, crediting Campazzo, Rivers, Davon Reed and Barton credit for their individual work on Curry.

“It’s five guys really defending as one. We went over some things at shoot around today, some things that we normally don’t do, but as I told our players, when you’re guarding against a great team and a great player, you have to alter your defense. You can’t play him with the regular defense that we use most nights. … (For) three quarters, it worked fairly well. It’s tough to keep Steph down for four quarters.”

“I don’t know what happened. He just woke up,” Jokic said.

“He doesn’t need much time to get going. That’s why he’s a great player.”

The Nuggets and Warriors are schedule for a rematch Thursday in Denver.

“I give our players a tremendous amount of credit for buying in and executing the game plan,” Malone said. “We know in two more days when they come back to our place, we’ll have to be even better to have a chance to beat them again.”