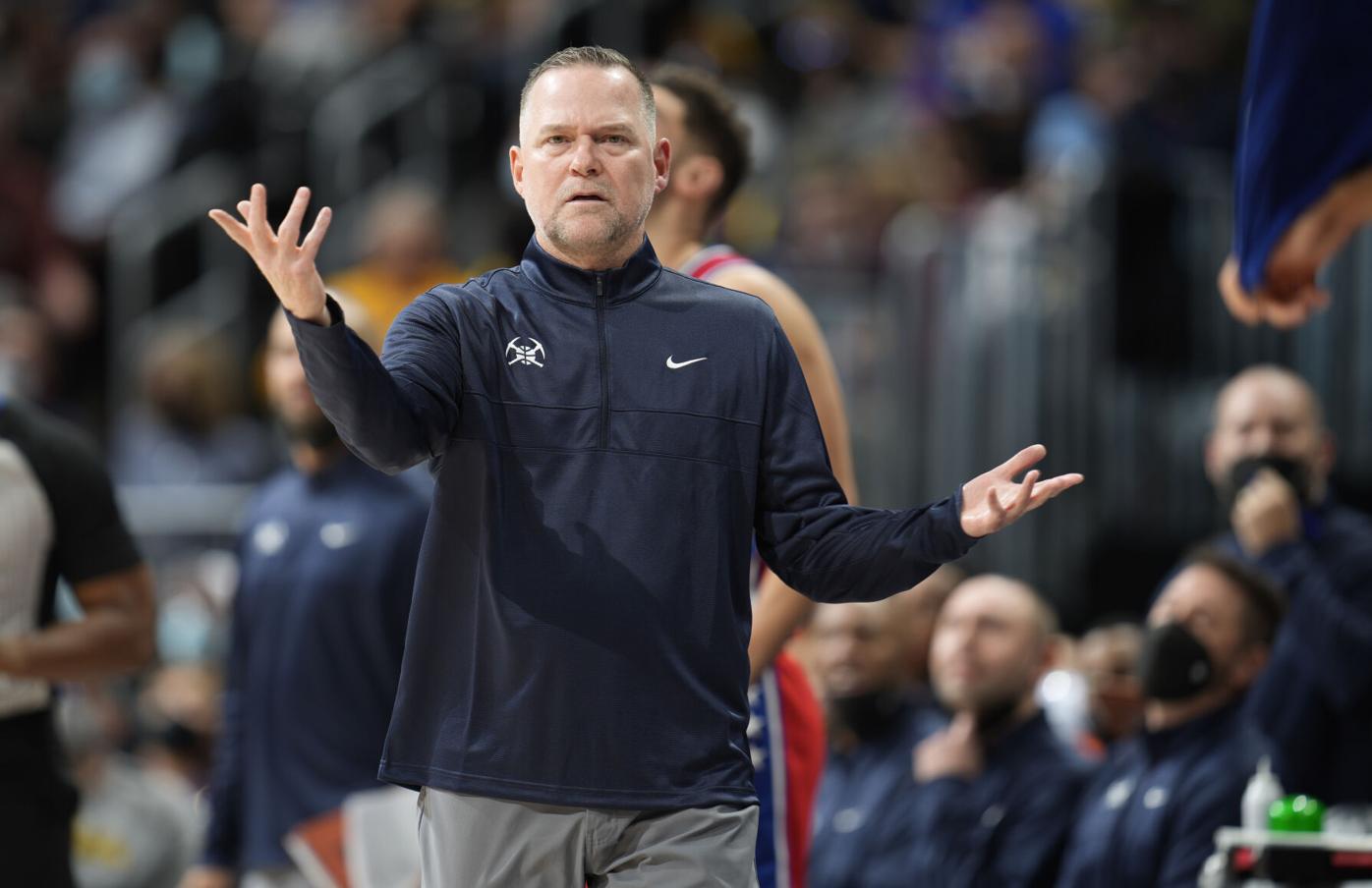 Denver Nuggets head coach Michael Malone argues for a call in the first half of an NBA basketball game against the Philadelphia 76ers, Thursday, Nov. 18, 2021, in Denver. (AP Photo/David Zalubowski) 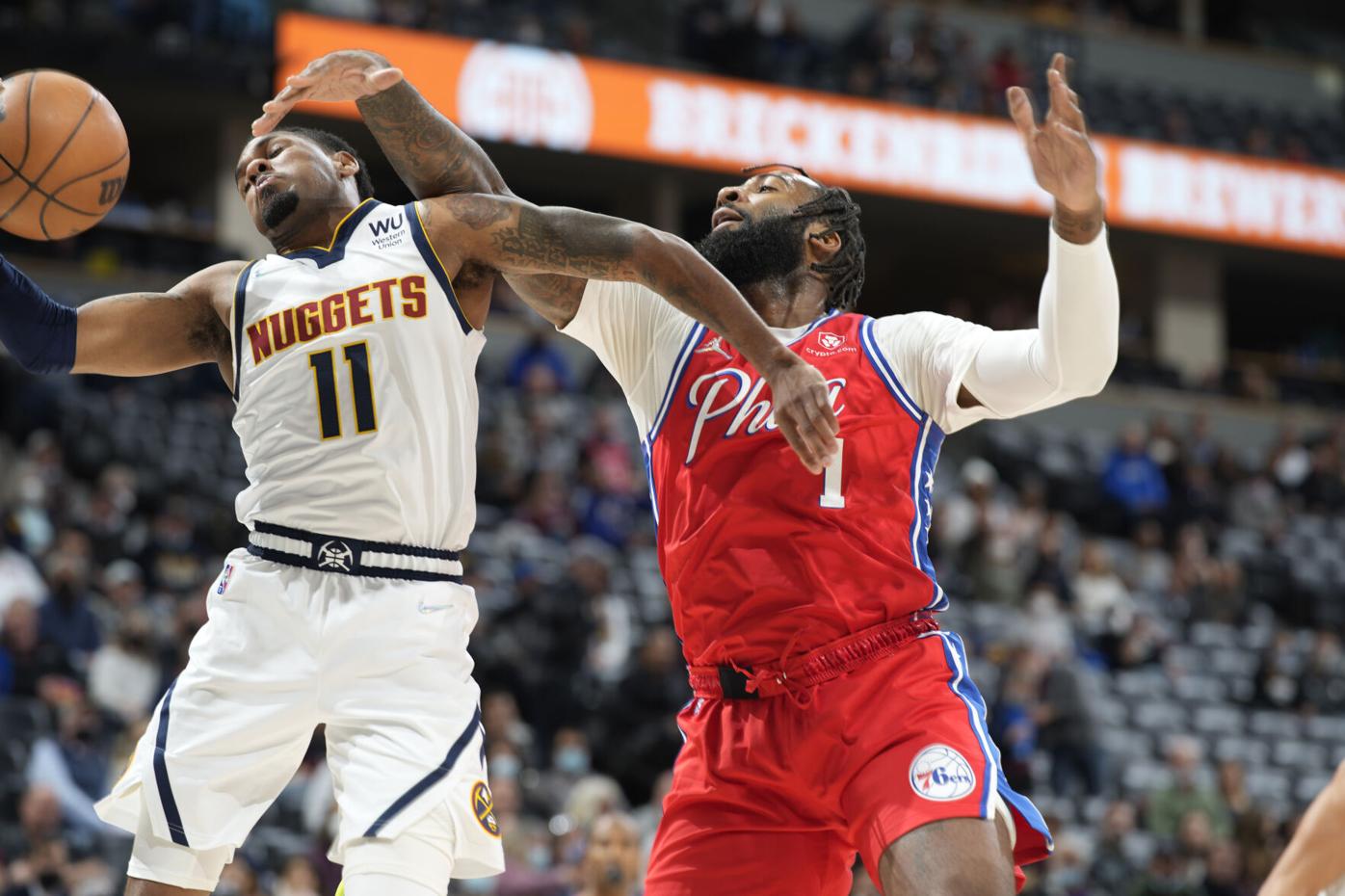 Denver Nuggets head coach Michael Malone argues for a call in the first half of an NBA basketball game against the Philadelphia 76ers, Thursday, Nov. 18, 2021, in Denver. (AP Photo/David Zalubowski)

DENVER – The final three quarters of a 103-89 loss to the shorthanded Philadelphia 76ers were an exercise in frustration for Michael Malone and the Denver Nuggets.

Playing against a 76ers team without star center Joel Embiid, Matisse Thybulle, Danny Green and Ben Simmons, the Nuggets coach was ejected before Nikola Jokic headed to the locker room a few minutes before the final buzzer.

“I just wanted to check on coach,” Jokic said.

Malone said he wasn’t trying to get tossed and was not aware of any injury to Jokic, who finished with a game-high 30 points to go with 10 rebounds and seven assists.

“As far as I know … there’s nothing wrong with Nikola,” Malone said.

Will Barton III added 19 points, nine rebounds and eight assists in his return after missing two games with back pain. Barton played more than 34 minutes. Malone said that was probably too many, but the veteran wing said he told his coach to use him however he normally would even though he’s not sure what exactly went wrong with his back.

“I don’t know. Maybe some spasms, because going into that game, I felt pretty good. I worked out that morning,” Barton said.

“Right before I did my activations to get myself loose before they call the starting lineups, it just kind of tightened up on me. I think it was some freak accident.”

Monte Morris was the only other Nugget in double figures, finishing with 11, while JaMychal Green led Denver’s bench unit, which was outscored by the 76ers’ reserves 29-20, with six points.

“It’s lack of containment. Tyrese Maxey is a very aggressive, head-down driver. He’s been doing that all season long,” Malone said before moving on to Curry. “You have to respect his 3-point shooting, so you’re running him off the 3-point line, which allows him to get downhill.”

Barton and Jokic led the Nuggets to an early 11-4 lead, their biggest of the night, but didn’t get enough help to hold onto the lead. The Nuggets didn’t have a third player record a point until the final minute of the first quarter, and there was 4:44 left in the second when Aaron Gordon became the fourth. By that point, the 76ers led 48-37.

After Curry hit a pair of free throws in the wake of Malone’s ejection, Philadelphia led by 11 midway through the third quarter.

Malone was assessed his first technical foul for arguing Curry should have been called for an offensive foul on a drive to the basket midway through the third quarter. After receiving the first technical, Malone ran onto the court and was quickly ejected. Assistant coach David Adelman took over for the final quarter and a half.

“I wasn’t trying to get tossed, but I just didn’t understand a lot of things that were going on on the floor,” Malone said. “I feel like I left David in a tough spot tonight.”

Jokic appreciated his coach fighting for the team, even if it led to a couple of free throws.

“He’s really emotional,” Jokic said. “He’s into the game, and I love that.”

The Nuggets don’t have much time to fix what led to Thursday’s frustration with the 10-5 Chicago Bulls visiting Ball Arena on Friday.

“That team came in here and had us on our heels the whole night. Whether it was Maxey, whether it was Seth Curry, whether it was Tobias Harris, they came in and beat our a--,” Malone said. “The best thing about the NBA … is that tomorrow night against a very talented Chicago team, we have a chance to get back to playing our brand of basketball. I’m anxious to see after tonight’s disappointing performance how we react. We’ll find out tomorrow.”

Michael Malone's ejection is the first of many if depleted Nuggets repeat loss to 76ers, Paul Klee writes.