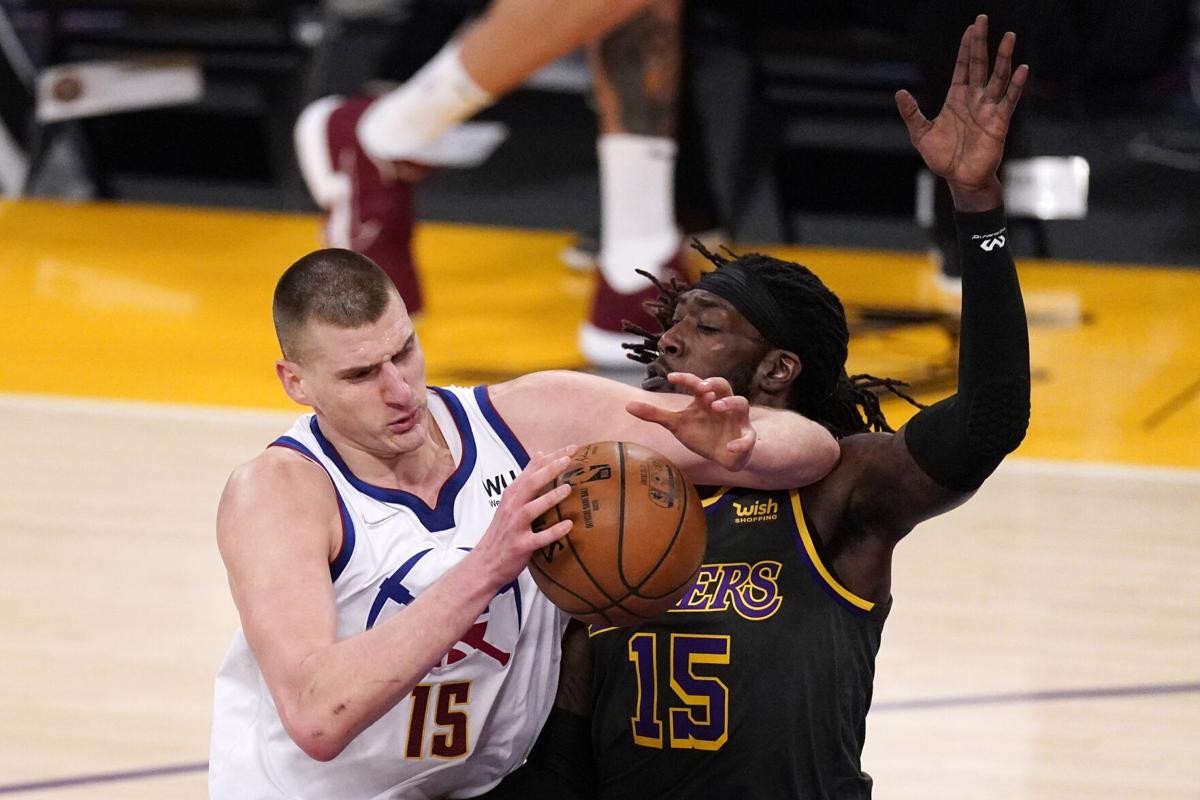 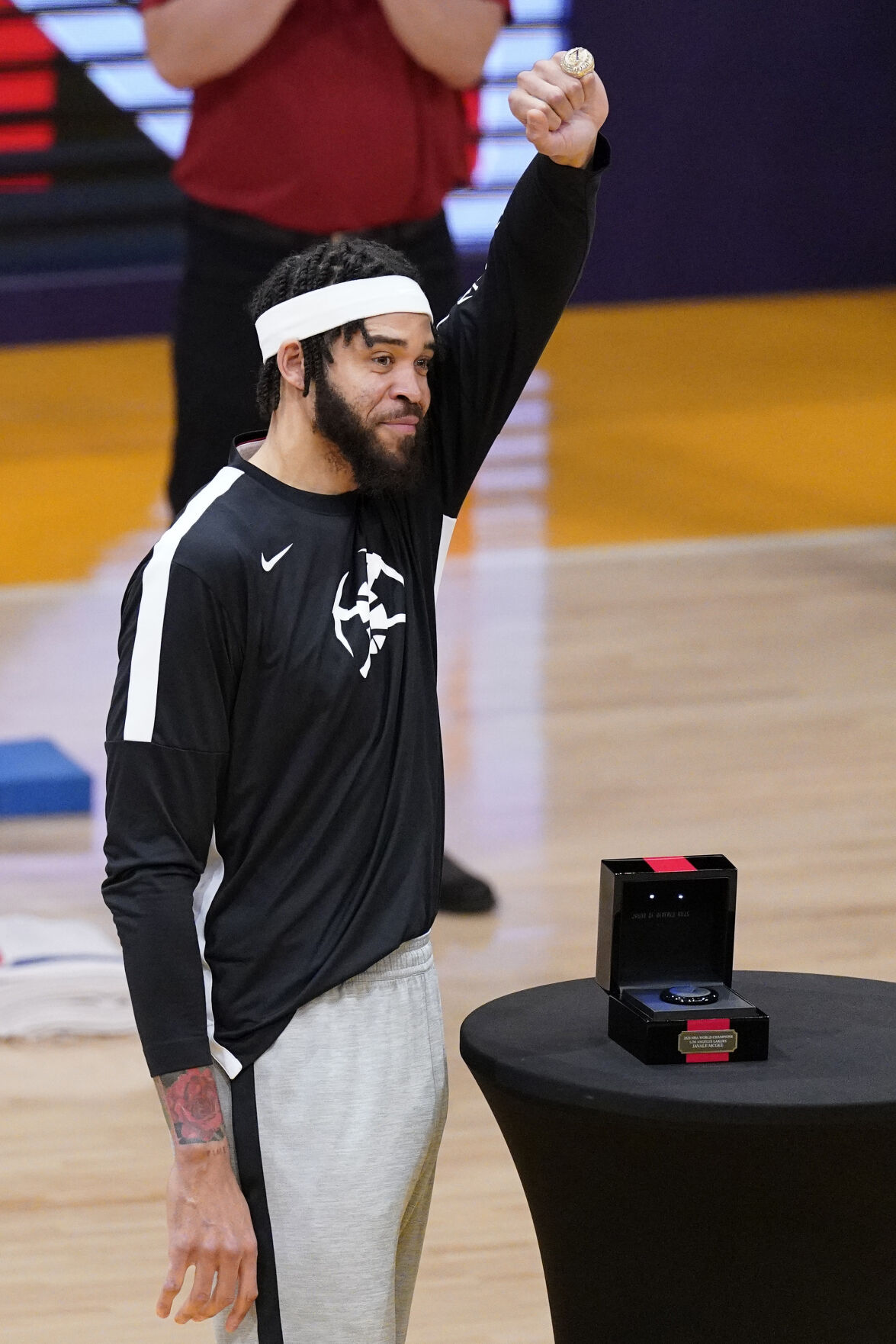 Denver Nuggets center JaVale McGee holds up his championship ring after receiving it prior to their NBA basketball game against the Los Angeles Lakers Monday, May 3, 2021, in Los Angeles. McGee was a member of the Lakers when they won the NBA Championship in 2020. (AP Photo/Mark J. Terrill)

Denver Nuggets center JaVale McGee holds up his championship ring after receiving it prior to their NBA basketball game against the Los Angeles Lakers Monday, May 3, 2021, in Los Angeles. McGee was a member of the Lakers when they won the NBA Championship in 2020. (AP Photo/Mark J. Terrill)

Denver's JaVale McGee picked up his third championship ring and had his bid for a fourth secured before the Nuggets lost their five-game win streak in a 93-89 defeat against the Lakers on Monday in Los Angeles.

Nikola Jokic led the Nuggets with 32 points, nine rebounds and five assists, while Michael Porter Jr. added 19 points thanks to a big second half. The Nuggets finished the game shooting 43.9% from the field and made just 6 of their 24 attempts from 3-point range.

“I think the main problem (was) we didn’t shoot well,” Jokic said after an uncharacteristic 12 for 28 night from the field. “Me, first. They did a good job, of course, but I kind of think I missed a couple of layups. But, it is what it is. They’re a really good team. It’s not a shame to lose to a good team."

With LeBron James again out of the lineup, Anthony Davis carried the Lakers with 25 points, grabbed seven rebounds and blocked a late shot to secure the win.

The short-handed Nuggets may have lost another player to injury, as PJ Dozier, who has replaced Will Barton III in the starting lineup, left the game early in the fourth quarter with an upper-leg injury and did not return.

“I haven’t gotten an update," coach Michael Malone said. "I talked to him back in the training room right after the game. He’s in decent spirits. I don’t know if this team is cursed, (if) we’ve got to bring in some sort of high priest to rid the team of any bad omens, but I could see right away he was grabbing, I think, his groin."

McGee, the only other Nuggets player in double figures, finished with 10 points on the night he received his championship ring from last year’s run with the Lakers.

“A tremendous honor,” Malone said pregame. “It will be great for all of our young players to kind of see that, because that’s what we aspire to be, is world champions.”

The Nuggets will officially have that chance thanks to Atlanta’s win over Portland. The Trail Blazers’ loss secured a top-six finish in the Western Conference for Denver, which means the Nuggets officially avoid the NBA’s new expanded play-in games.

One of McGee’s better stretches of his second stint with the Nuggets came when he scored the team’s first eight points of the second quarter, putting Denver up six. The Lakers used a surge late in the second quarter to take a three-point halftime lead. McGee added a big block and another bucket in the third, but Denver would fall behind by as many as 14 points early in the fourth.

Porter and Jokic carried the Nuggets back within four points late in the fourth before Porter had a made 3-pointer negated by an off-ball foul called on Facundo Campazzo. Malone weighed challenging the call but said his assistants who advise him on such decisions said it wasn’t worth it.

“Definitely considered it, but I talked to our coaches behind the bench, and they said what the official said, you know, that Facu kind of took him out,” Malone said, adding he hasn’t seen a replay but trusted his assistants.

“They felt from their perspective and watching it that it wouldn’t have been overturned, so big play. We come down, get a stop and get a big shot that’s taken off the board. So, those are the breaks.”

“It was definitely exciting, and it’s always exciting playing a team you used to play for. I was locked in from the jump, though. It didn’t matter about the ring. I was just locked in on the task at hand,” McGee said. “Unfortunately, we didn’t come up with the win.”

DENVER – Another new starting lineup proved to be no problem for Nikola Jokic on Wednesday at Ball Arena.