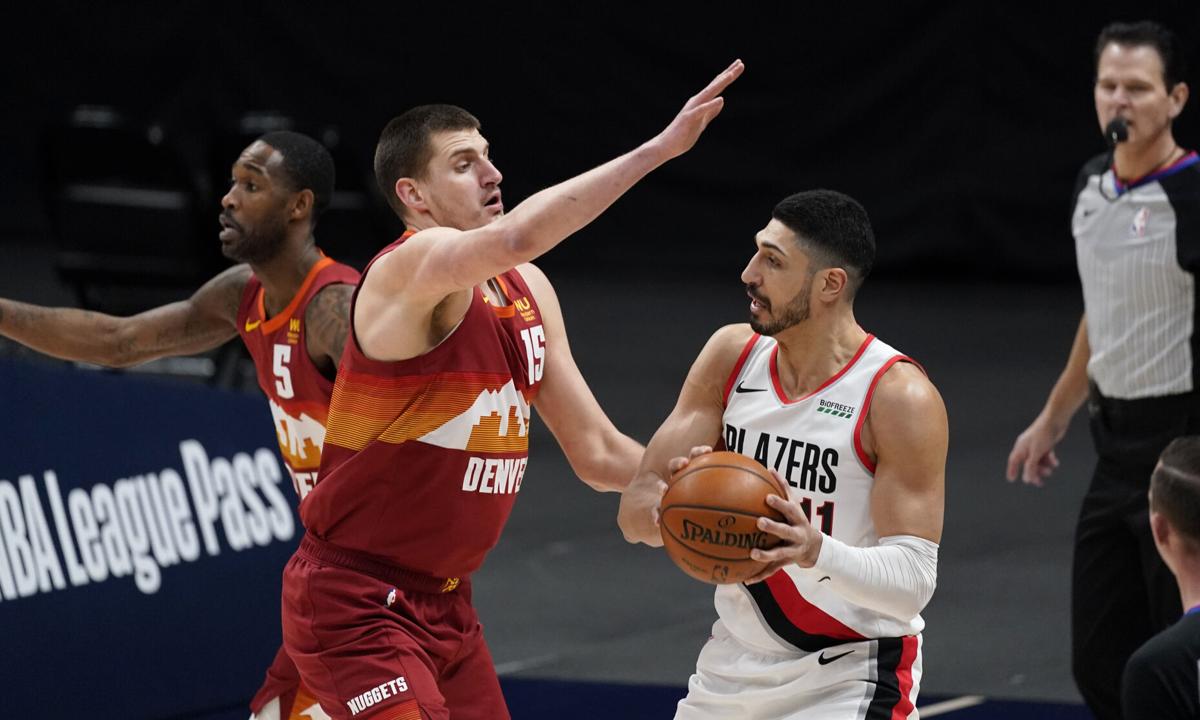 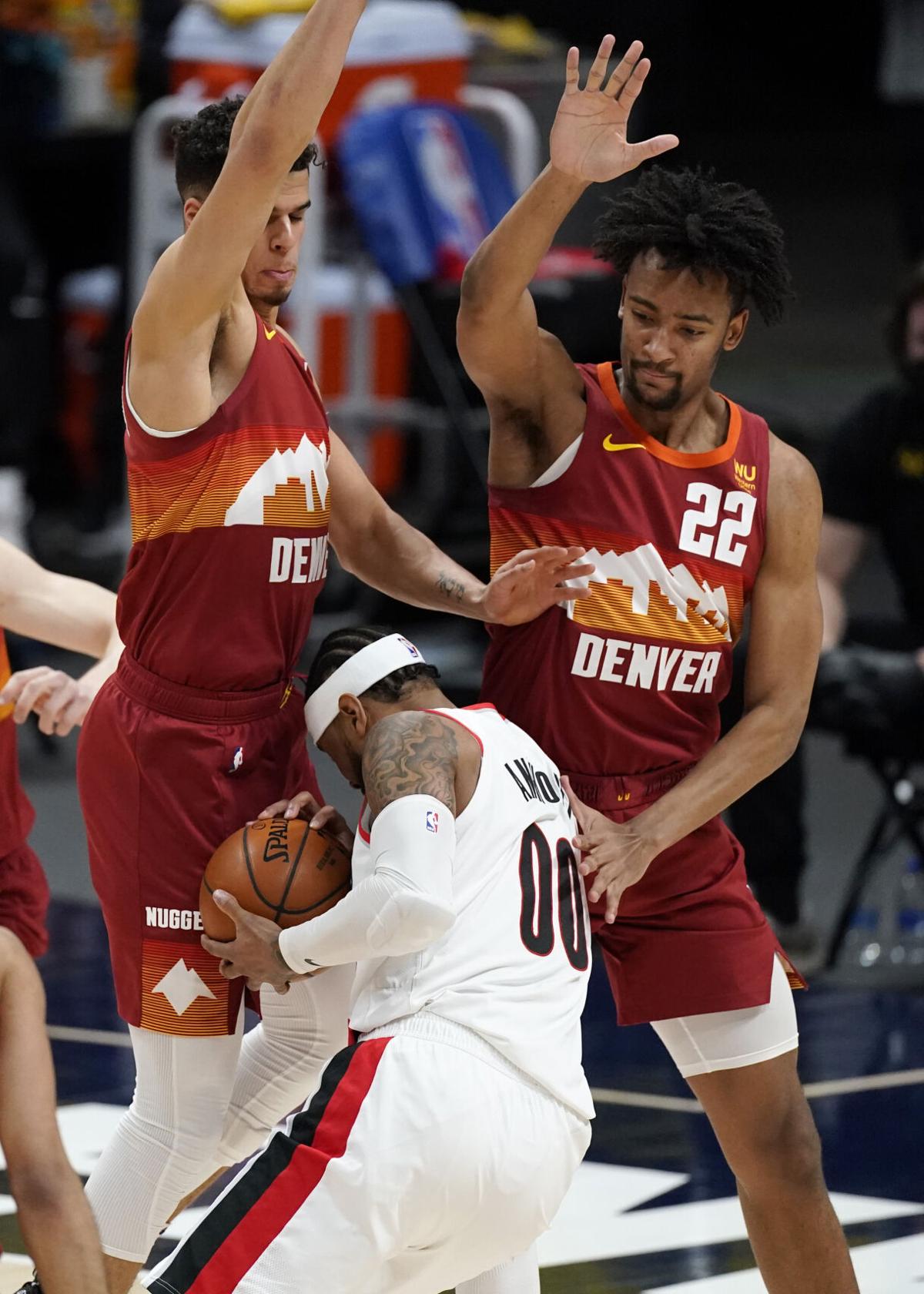 Portland Trail Blazers forward Carmelo Anthony, center, is fouled as he drives the lane as Denver Nuggets forwards Michael Porter Jr., back left, and Zeke Nnaji defend in the first half of an NBA basketball game on Tuesday, Feb. 23, 2021, in Denver. (AP Photo/David Zalubowski)

Portland Trail Blazers forward Carmelo Anthony, center, is fouled as he drives the lane as Denver Nuggets forwards Michael Porter Jr., back left, and Zeke Nnaji defend in the first half of an NBA basketball game on Tuesday, Feb. 23, 2021, in Denver. (AP Photo/David Zalubowski)

The Nuggets’ next All-Star Game starter squared off with the franchise’s last player to earn that honor in the first half of Tuesday’s game against Portland at Denver’s Ball Arena before Jamal Murray made his case for inclusion.

Murray missed out on an All-Star reserve spot earlier Tuesday, his 24th birthday, but scored 19 of his 24 points in the fourth quarter, leading the Nuggets (17-14) to a 111-106 win over the Trail Blazers. He didn’t seem too bothered by the news but said it does provide some motivation afterward.

“It carries on for the whole season,”  Murray said. “I feel like I was banged up all season — still trying to fight through and play through it and did OK. It’s not my first time not making it, so I’ll always come back next year. I’ll come back better.”

Nikola Jokic, recently named a starter for the Western Conference, scored 23 of Denver’s 57 first-half points and finished with a game-high 41 on 17 of 32 shooting.

“If the shot is there, he’s taking it. Myself, the coaches and all of his teammates are urging him to take it. He’s an MVP candidate for a reason, man,” Nuggets coach Michael Malone said.

“He’s going to get great looks, and tonight was one of those nights. I love, absolutely love, an aggressive Nikola Jokic.”

Carmelo Anthony, who started the 2011 All-Star Game as a member of the Nuggets scored 19 of Portland’s 57 points in the first half.

The game remained tied after three quarters and was deadlocked again at 90 with 6:24 to play before Murray hit one of his three fourth-quarter 3-pointers, giving the Nuggets the lead for good.

“Has he been up-and-down this year, of course. I agree with that 1,000%. He would agree with that. Has he been phenomenal as of late, yes he has. This is historically accurate. This is who Jamal has been in five years,” Malone said, mentioning what comes after the slow

starts to a season is an increased level of play, especially when it counts most in the postseason.

“Once he hits his stride, watch out.”

Portland’s Damian Lillard got the nod as a reserve Tuesday and finished with a team-high 25 points.

“It was no surprise that he made the All-Star team, I think that was kind of a foregone conclusion since he's in the MVP conversation and by all accounts, he should've been a starter,” Portland coach Terry Stotts said pregame. “He's durable; he's carrying us since CJ (McCollum) and (Jusuf) Nurkic have been out.”

Beyond Jokic’s start and Murray’s finish, Malone seemed most pleased with a couple of numbers. First, the Nuggets committed just one turnover, a new NBA record, and had 25 assists.

“That was an amazing stat for us to get this win,” Malone said.

Murray finished with a team-high eight assists but was not so pleased when he found out he committed the lone giveaway.

Another couple of numbers that put a smile on Malone’s face: Michael Porter Jr. grabbed a team-high 10 rebounds, contested more shots than any other Nugget with 12 and finished with a dozen points.

“We need him to make shots, but we also need him to defend and to rebound,” Malone said. “Tonight, I thought it was an all-around game for him.”

“I just want to help my team on that end, because I think I’m very capable of it,”  Porter added.

Thanks to Murray’s strong close the Nuggets will take a 17-14 record into Thursday’s game against Washington.

“I was able to hit more than one (shot) in the fourth and get going and take the pressure off Joker and all the other guys and pick up the win,” Murray said.

“There’s a lot more to achieve this season than just being an All-Star.”