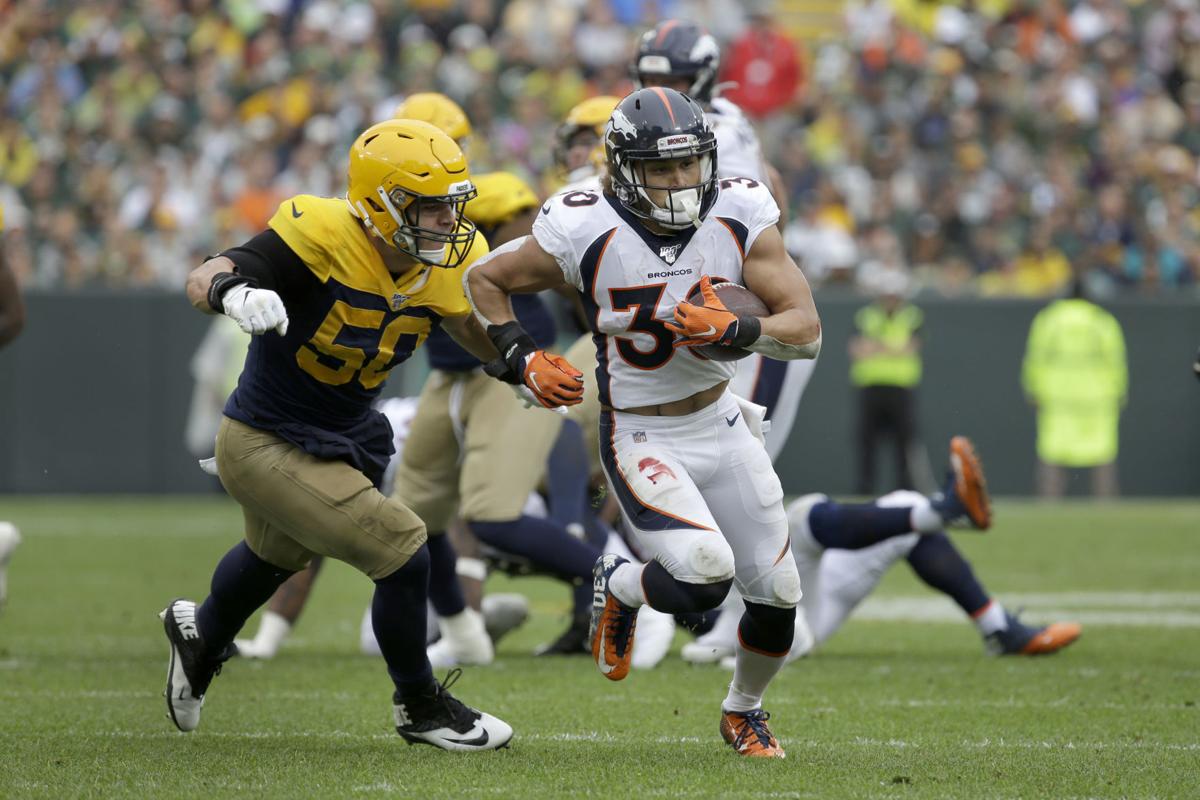 Broncos running back Phillip Lindsay, right, runs with the ball as Green Bay inside linebacker Blake Martinez defends during the first half Sunday in Green Bay, Wis. 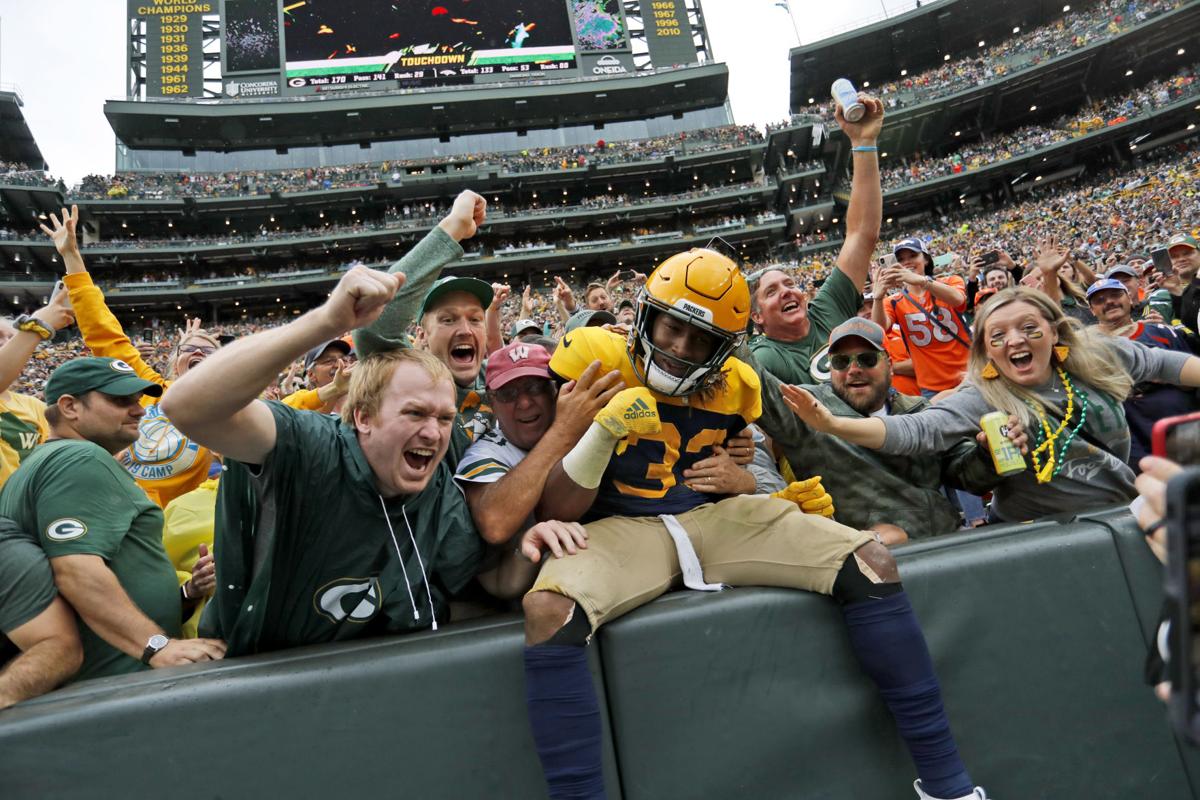 Green Bay Packers running back Aaron Jones is congratulated by fans after scoring during the first half Sunday against the Broncos in Green Bay, Wis. 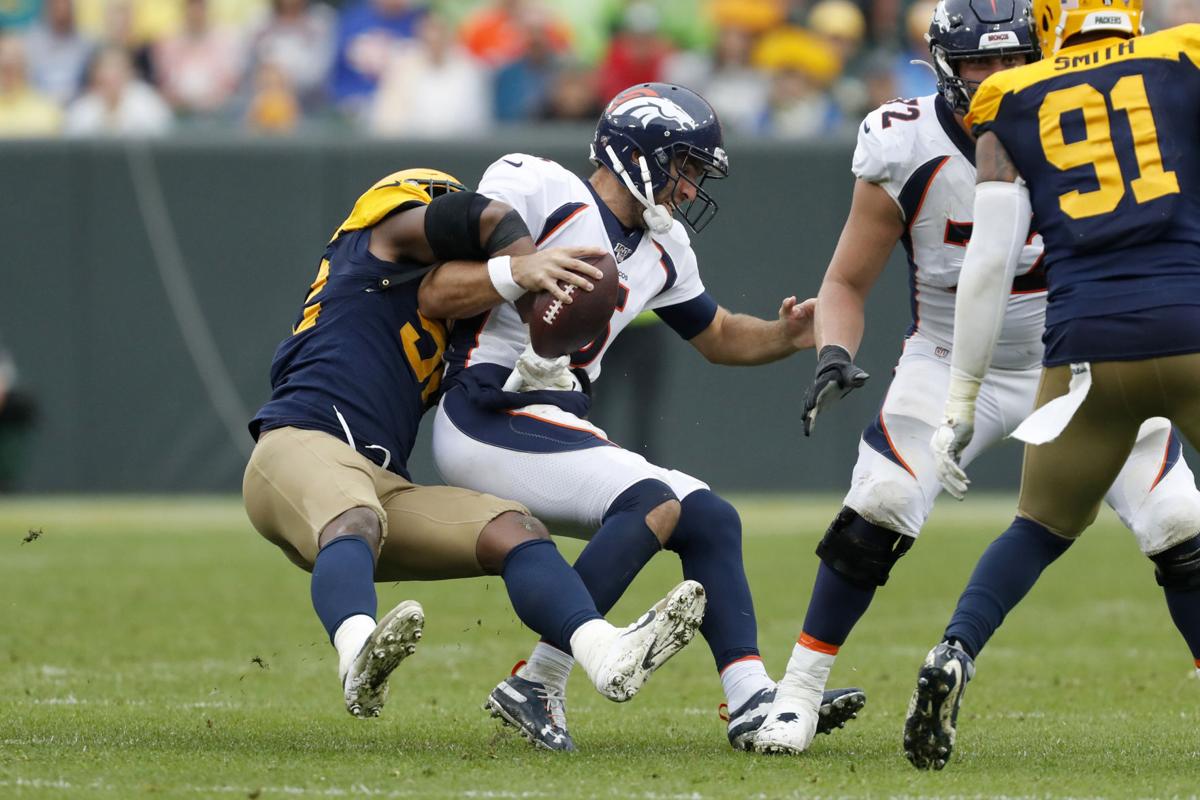 Broncos running back Phillip Lindsay, right, runs with the ball as Green Bay inside linebacker Blake Martinez defends during the first half Sunday in Green Bay, Wis.

Green Bay Packers running back Aaron Jones is congratulated by fans after scoring during the first half Sunday against the Broncos in Green Bay, Wis.

GREEN BAY, Wis. • It was sickly fitting this happened here, home of the mighty Green Bay Packers and their four Super Bowl titles. Fitting, because titles once were the Broncos’ objective.

The Broncos are “living in a world of suck,” as dejected star wide receiver Emmanuel Sanders said at his locker after Green Bay shoved the Broncos aside, 27-16, here at Lambeau Field on Sunday.

Even when it’s dumping rain buckets in lieu of snow drifts, the Frozen Tundra is no place to get right. Shoot, the Broncos can’t do nearly enough right. No sacks. No forced turnovers. No smiles in Broncos Country — seven straight losses, each more damning and painful than the last. Sad.

“Things are rough around here. Obviously, the past few years have been tough,” Sanders went on as teammates yanked their rolling bags toward the team bus. “Right now (we’re) 0-3, living in a world of suck. Football’s still fun, but it’s not so much fun when you’re losing.”

Winning? What’s that? The Broncos haven’t won in 294 days. You know how many cheeseheads shipped out to Colorado since Sanders, Von Miller and Chris Harris Jr. left a happy locker room? Enough to fill Lambeau, wipe Kroll’s out of butter-burgers and pack the sledding hill constructed of Astroturf across the street.

Sad. Sad, because what the Packers are all about is what the Broncos used to be all about. They are two proud, successful franchises who combined for 47 years of Elway, Manning, Favre and now Aaron Rodgers. They’ve hosted seven Super Bowl parades between them and a waiting list for season tickets at Lambeau and Mile High that stretches from here to Appleton.

Woody Paige: Denver Broncos and their fans should salute contributions of John Ralston

These days, one does not look the other. One looks like a Super Bowl contender — the one in blue-and-gold throwbacks from the Don Hutson era. One’s left wanting those 294 days back.

“You got the solutions?” coach Vic Fangio asked after the Broncos remained winless at Lambeau.

Wish I did, coach. Because what I hear from family and friends after they suffer through another Broncos loss is sad. Frustration’s given way to despair. Slumped shoulders have taken the place of raised voices. They don’t throw the remote anymore; they grab another cold one to dull the pain. Sunday’s loss marked the second seven-game losing streak in the past 31 games. The Broncos are 8-23 in those games, a record fit for the old Browns. That makes all the youngest Broncos fans wonder what all the fuss is about, since losing games now is the norm.

Don’t take this the wrong way. These Broncos — the ones who’ve opened 0-3 for the first time in 20 years — haven’t cracked yet. They haven’t accepted moral victories as the means to an end. They haven’t thrown teammates under the team bus. The next three games — all of which are profoundly winnable — figure to test Fangio in a way he’s never been tested. Beating Jacksonville, Los Angeles (the Chargers, on the road) and Tennessee may not shove Denver back into the playoff picture. But wins would go a long way toward ensuring their faith in Fangio’s program. They still believe.

“Got to come to work,” linebacker Todd Davis said. “It’s your job.”

The Packers sacked Joe Flacco six times. The miracle of miracles was not that left tackle Garett Bolles played an entire game without a holding penalty. It was how Flacco hits the turf so often, yet never has a hair out of place.

The Broncos sacked Aaron Rodgers zero times. Follow the money. Has there been a worse return on investment in all of sports than Denver’s defense? With big-money stars Von Miller and Chris Harris Jr., the Broncos’ ‘D’ checks in at $87 million, according to Spotrac.com. Only Minnesota’s defense costs more. Now the Broncos are up to 12 quarters of game action without a sack, without a fumble, without an answer to what’s going wrong.

“That’s three games in a row. That’s no good, obviously,” Fangio said. “It is the circumstances of the game, to a degree.

This game, in some ways, was very similar to our first two. Until we can stop people more decisively and score more points, teams are going to be more content playing these types of (patient, safe) games.”

It’s sad, really. It’s sad, because Broncos fans who spend their hard-earned bucks to fly to these faraway road games now exchange punchlines instead of fist pounds. It’s sad, because the prime of Miller’s career is being wasted on an offense that’s scored 14, 16, 14, 9, 14, 16 and 16 points during the losing streak. Von’s not off the hook, either, which he said.

They do football correctly up here. They plan weekends around the Packers’ and Badgers’ schedules. They miss a game only when locked up or knocked up. They began tailgating on Friday, across Lombardi Avenue, where the backyards all feature beer-friendly rooftops.

As a packed house of 78,000 fanatics left Lambeau in a sea of gold and green, they all chanted in unison “Go, Pack, go!” All I could think of? Go home, Broncos, go home. This is not your company anymore.

GREEN BAY, Wis. • Maybe there’s another way out of this hole. Maybe this is the one, single, only time that following the money is not how you…