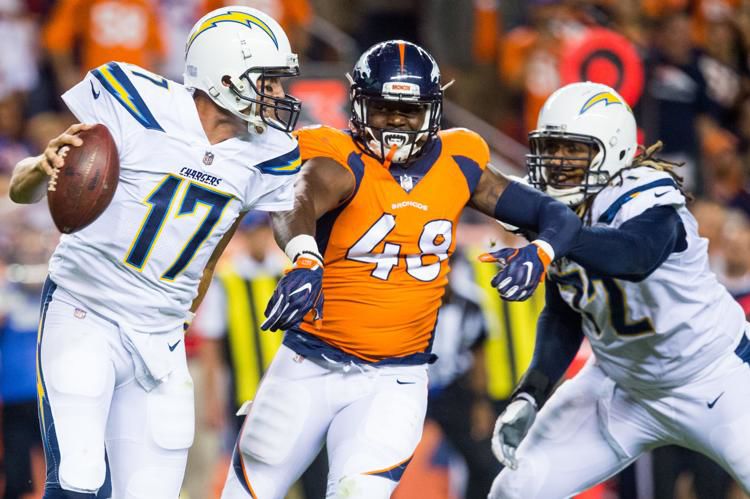 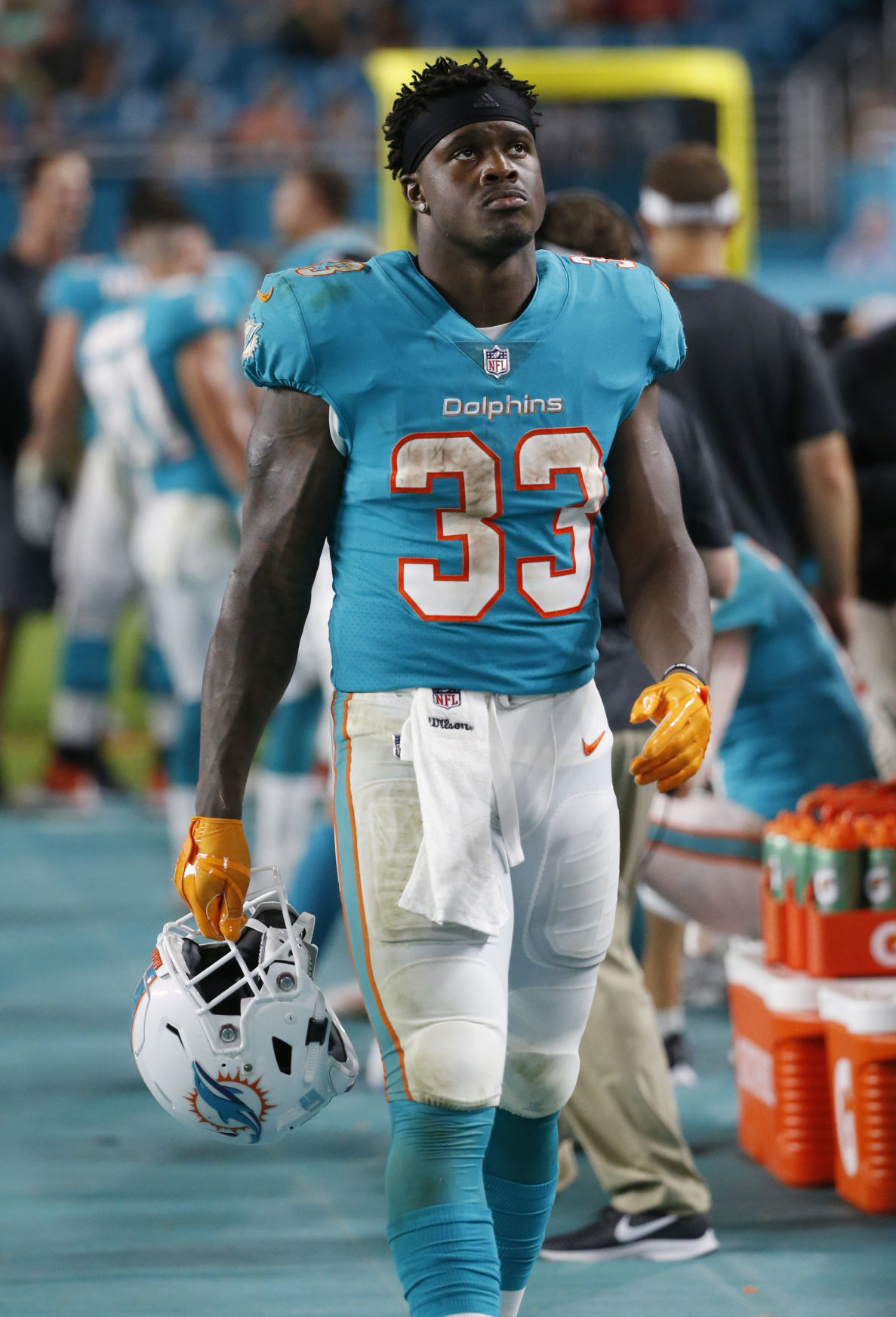 Miami Dolphins running back Kalen Ballage (33) walks the sidelines, during the second half of an NFL preseason football game against the Tampa Bay Buccaneers, Thursday, Aug. 9, 2018, in Miami Gardens, Fla. The Buccaneers defeated the Dolphins 26-24. (AP Photo/Wilfredo Lee)

Miami Dolphins running back Kalen Ballage (33) walks the sidelines, during the second half of an NFL preseason football game against the Tampa Bay Buccaneers, Thursday, Aug. 9, 2018, in Miami Gardens, Fla. The Buccaneers defeated the Dolphins 26-24. (AP Photo/Wilfredo Lee)

Valor Christian’s Christian McCaffrey, NFC offensive player of the month. Eaton’s Austin Ekeler, six touchdowns in September. Denver South’s Phillip Lindsay, 1,000-plus yards as a Broncos rookie. Falcon’s Kalen Ballage, Dolphins starter to open the season. Is Colorado the cradle of young running backs? The Broncos’ focus is Ekeler, who’s the kind of swift, shifty tailback that gives them trouble. Oh, and Melvin Gordon will make his season debut Sunday. Time to make some changes on Denver’s defensive line. “He’ll continue to be a weapon for us,” Philip Rivers said of Ekeler, the real deal, who played his college ball at Western Colorado University in Gunnison. “It’s not like we’re going to put him on the back burner now.”

Broncos veteran players are letting them down

If the Broncos are to turn this lemon of a season into lemonade, the likes of Chris Harris Jr. and Emmanuel Sanders must improve their standing in the leadership department. Too many vets are showing they are in it for themselves. When talk turns to the defense’s struggles, Harris is quick to reference his own statistics: “I probably gave up the least amount of yards in the league, no touchdowns, probably two catches,” Harris said. Problem is, no one cares here when the Broncos are 0-4. Sanders throwing his helmet, and a fit, during a loss at Green Bay drew the ire of ex-Bronco Ryan Harris on Altitude Sports Radio. “He quit on his team,” Harris said. Yikes.

Ding, dong: Shaq Barrett was a no-go for Broncos

When it comes to the Broncos’ fall from grace, there are more than enough dings to go around. Ding John Elway and the front office for taking Paxton Lynch in the first round. Ding ‘em twice for taking Shane Ray in the same spot after the Missouri product raised the “character issues” flag prior to the draft. Ding ‘em for the Vance Joseph hire, or thinking the Super Bowl 50 blueprint was sustainable. But we can’t ding ‘em for losing NFL defensive player of the year front-runner Shaq Barrett to the Bucs in free agency. CSU’s finest wasn’t going to stay in Denver, not with Von Miller and Bradley Chubb hogging snaps. “I want to be a starter. That’s my goal,” Barrett told me at the end of last season. “If it’s here or somewhere else, that’s my goal.”

Woody Paige: Nearly time for a change for John Elway with the winless Broncos?

Columnist Woody Paige says John Elway should relinquish his GM position, and stay as president of football operations, if the Denver Broncos don't improve the rest of this season.