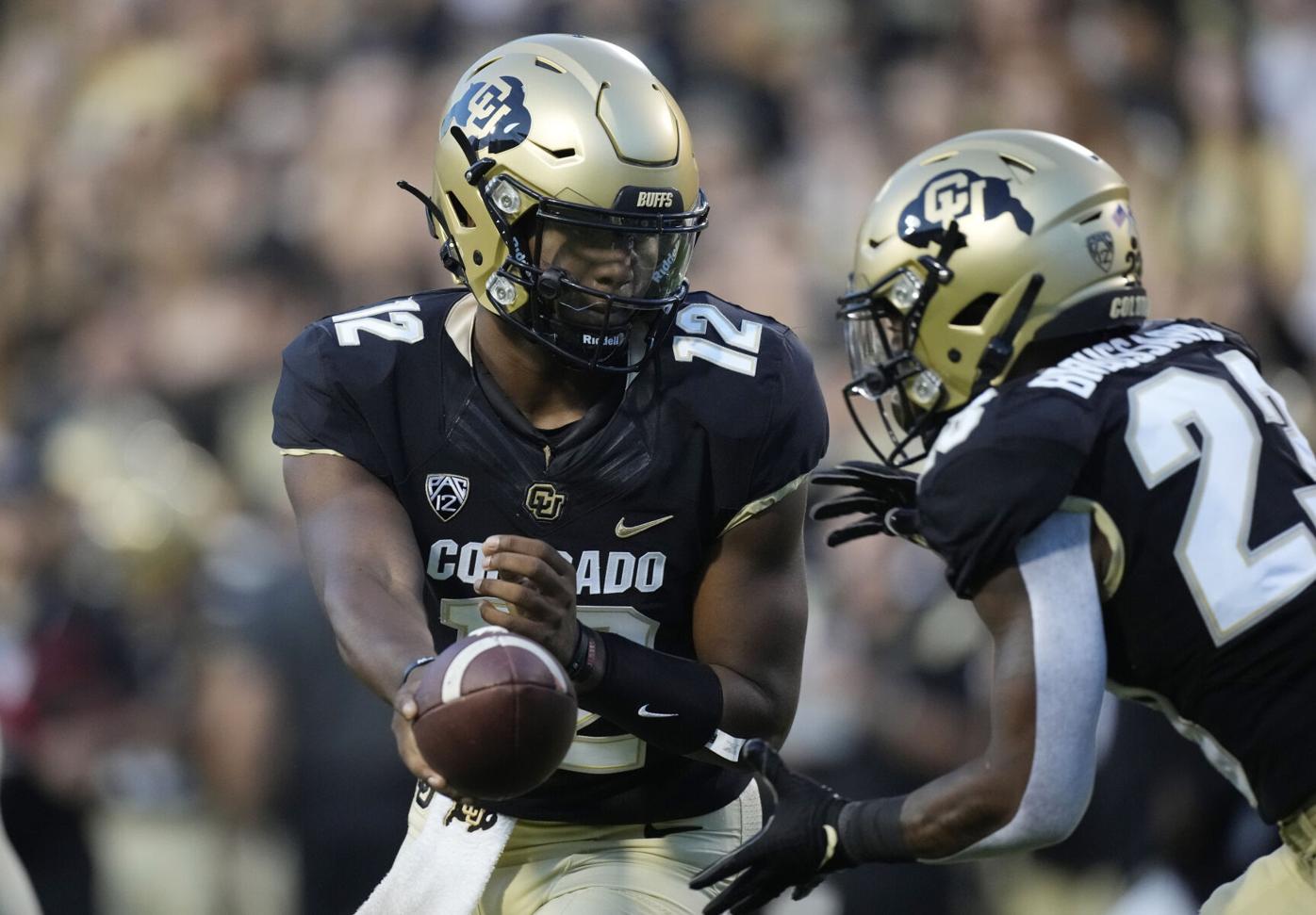 Colorado quarterback Brendon Lewis, left, hands off the ball to running back Jarek Broussard in the first half against Northern Colorado on Friday in Boulder. 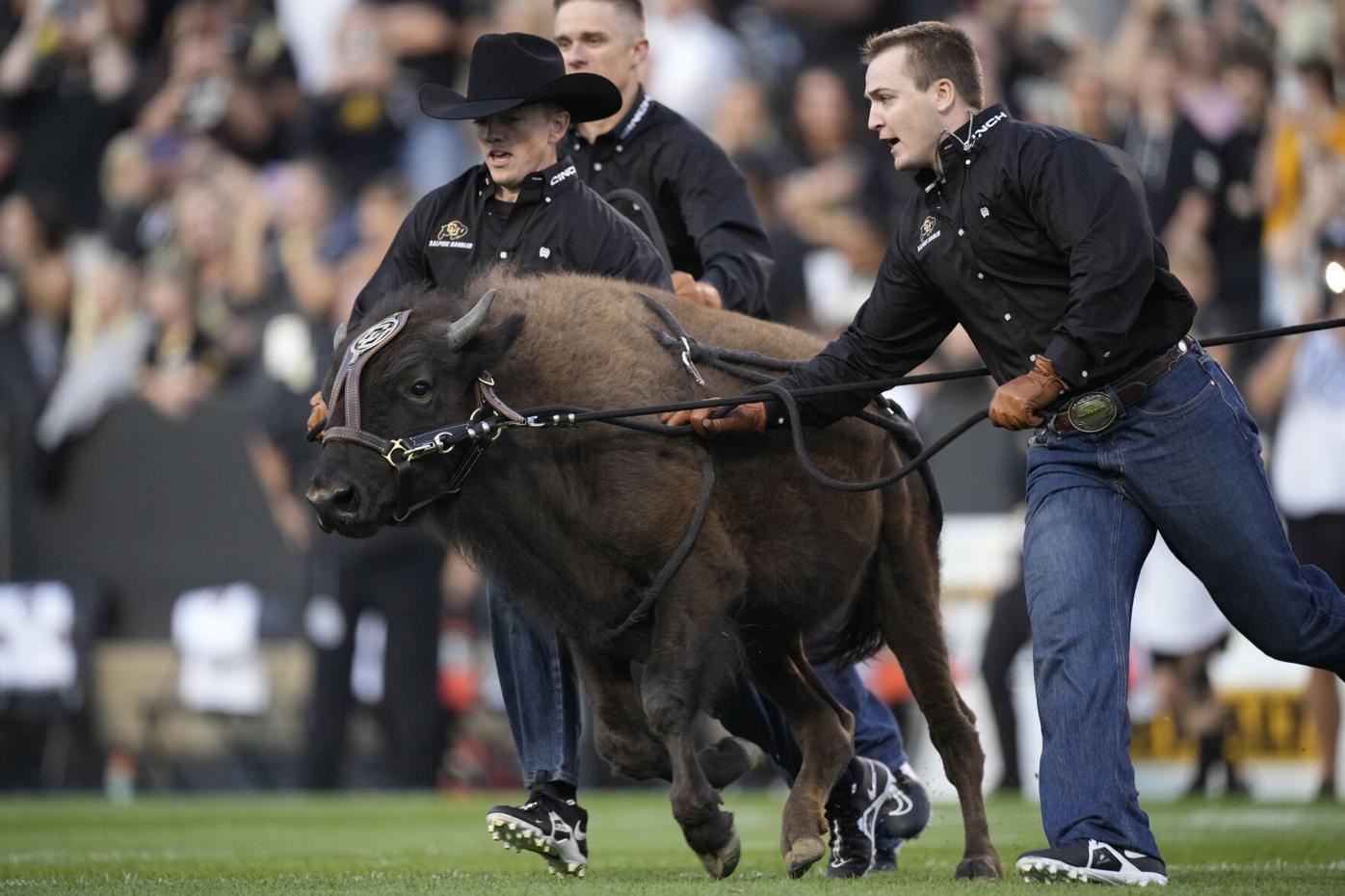 Colorado quarterback Brendon Lewis, left, hands off the ball to running back Jarek Broussard in the first half against Northern Colorado on Friday in Boulder.

BOULDER – Ralphie VI ran onto Folsom Field for the first and second times Friday night, and Colorado rushed its way to a 35-7 win over Northern Colorado in the Buffaloes’ season-opener Friday.

Colorado’s live mascot, Ralphie, made her debut run pregame in front of a crowd of 44,153 before the football-playing Buffaloes racked up 281 rushing yards and four touchdowns, from four different players, on the ground in a comfortable win over their Big Sky visitors.

“That’s the challenge right now is trying to keep them all happy, when not all of them can carry the ball at the same time,” Colorado coach Karl Dorrell said. “It’s a great problem to have, and it’s good to have that type of production from all of those guys.”

A three-yard run from junior Alex Fontenot capped a 16-play, 90-yard drive in the third quarter for Colorado’s second rushing touchdown. He finished with 40 yards on eight carries.

Freshman Ashaad Clayton set up Colorado’s third rushing touchdown with a 35-yard run and became the third different Buffalo to rush for a touchdown early in the fourth quarter. He finished with 51 yards on eight carries.

A five-yard touchdown run from sophomore Deion Smith in the fourth quarter went down as the host’s final rushing touchdown.

“We got a good group of guys,” Broussard said.

“It was just good to see those guys come out and get a touchdown.”

The Buffaloes averaged 5.7 yards per carry on 49 rush attempts. Quarterback Brendon Lewis didn’t score but rushed eight times for 44 yards. Lewis completed 10 of 15 passes for 102 yards and a touchdown and did not turn the ball over. He rated his first start at CU as decent.

After a scoreless first quarter, the Buffs got the ground game going in the second quarter. A 12-yard run from Broussard got Colorado inside the Northern Colorado 5-yard line, and Broussard opened the scoring with a 1-yard run two plays later.

Broussard busted a 30-yard run two drives later to get the Buffaloes back in UNC territory. Lewis rolled to his right and hit a streaking Montana Lemonious-Craig in the back corner of the end zone to give Colorado a 14-0 halftime lead.

“I take pride in trying to spread the ball around and get everybody the ball,” Lewis said. “It felt good to get Montana his first catch, his first collegiate touchdown. That was really cool.”

Ralphie got another trot on the turf at halftime, as her handlers try to get her more comfortable on the field so the football team can run directly behind her in the future.

“It’s a shame we can’t run really too close behind Ralphie just yet,” Dorrell said.

“We had to make sure she finished her loop before we actually took the field. We’re trying to progress to that next stage when we can run out with her. She’s a baby, but she looks good. I think she enjoyed it. … She’s going to be a good one.”

Northern Colorado scored its only touchdown on the final play of the third quarter when Dylan McCaffrey hit Kassidy Woods, who broke a couple of tackles on his way to a 34-yard touchdown. McCaffrey finished with 236 passing yards. The Bears rushed for just 17 yards on 18 attempts.

“I do take my hat off to coach (Ed) McCaffrey and that team that he’s coaching,” Dorrell said.

Colorado is scheduled to make the short trip to Denver next Saturday to host No. 6 Texas A&M at Empower Field at Mile High.

Paul Klee: CU Buffs roll past UNC in season opener, but this Dylan McCaffrey story is the one to watch

There was something special, something cool, about watching Ed, Max and Dylan McCaffrey huddled up at Folsom Field, Paul Klee writes. Saturday night was a win for college football in Colorado.