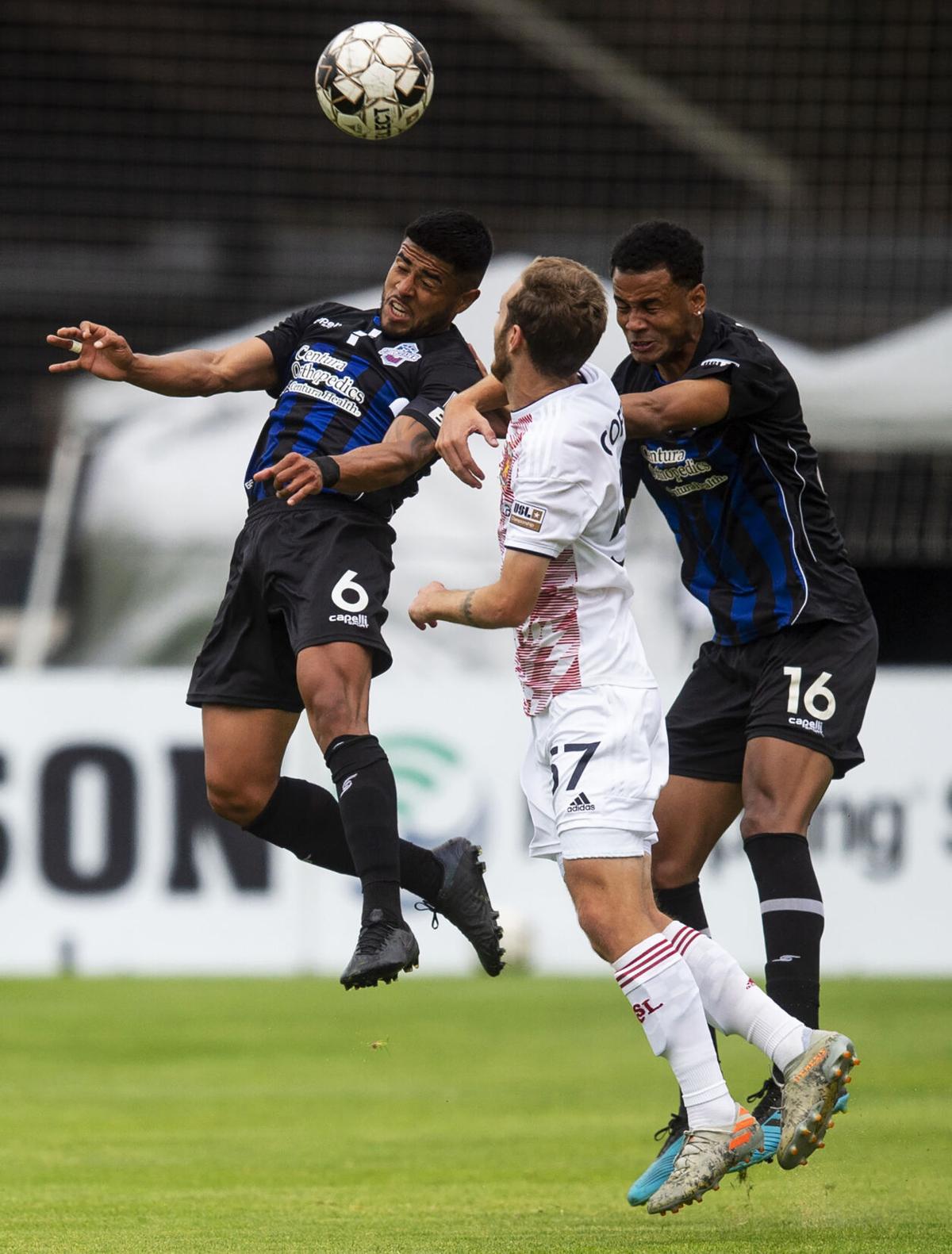 Switchbacks center midfielder Rony Argueta (6) heads the ball next to center back Arturo Diz (16) during the first half of the Colorado Springs Switchbacks FC home game against the Real Monarchs Salt Lake City at Weidner Field in Colorado Springs, Colo., on Saturday, August 1, 2020. (Chancey Bush/ The Gazette) 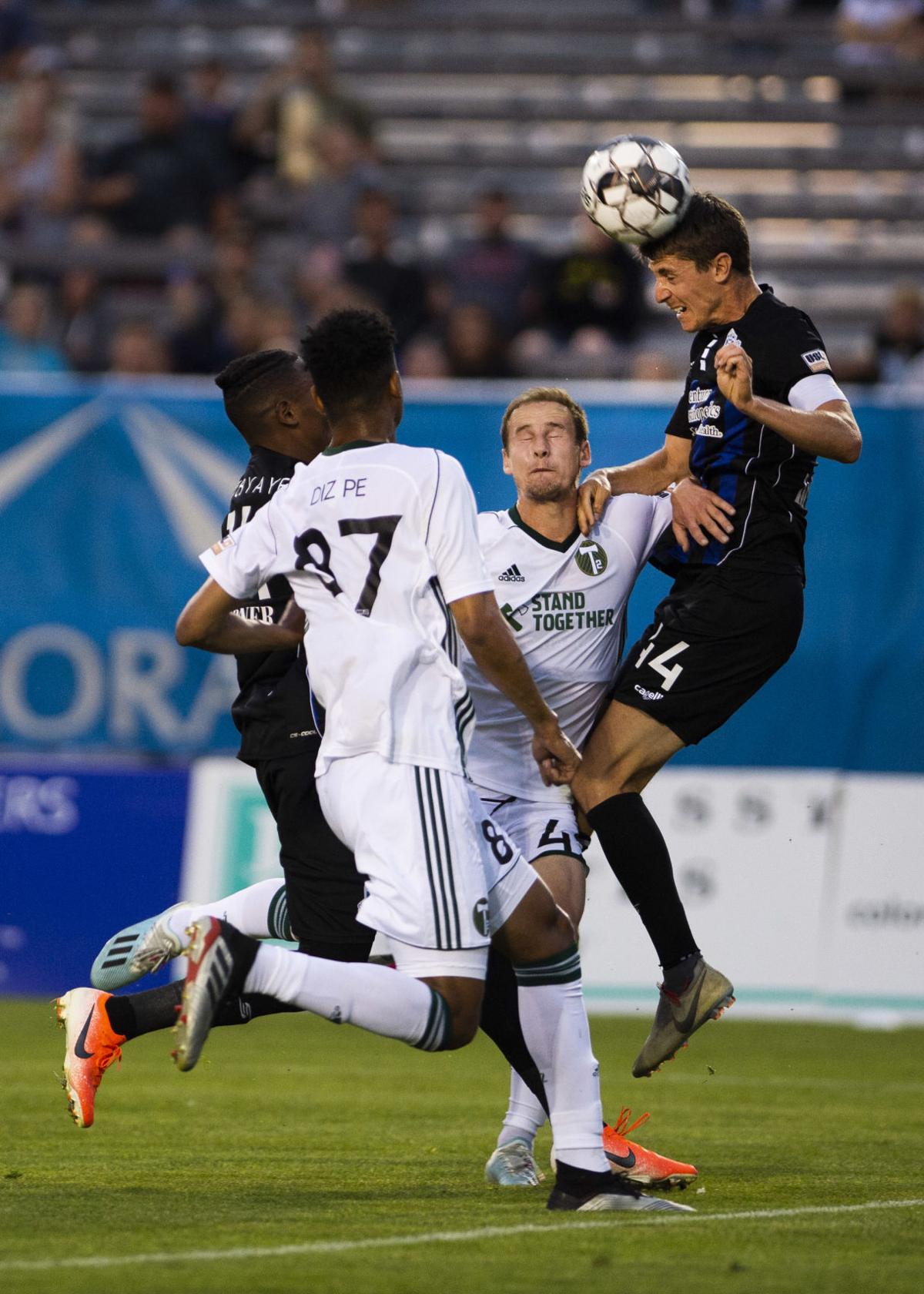 Switchbacks right back Jordan Burt heads the ball during the game against the Portland Timbers 2 on Wednesday, August 7, 2019 at Wiedner Field in Colorado Springs. (Photo by Katie Klann, The Gazette)

Switchbacks center midfielder Rony Argueta (6) heads the ball next to center back Arturo Diz (16) during the first half of the Colorado Springs Switchbacks FC home game against the Real Monarchs Salt Lake City at Weidner Field in Colorado Springs, Colo., on Saturday, August 1, 2020. (Chancey Bush/ The Gazette)

Switchbacks right back Jordan Burt heads the ball during the game against the Portland Timbers 2 on Wednesday, August 7, 2019 at Wiedner Field in Colorado Springs. (Photo by Katie Klann, The Gazette)

The road ahead of Switchbacks FC is long,not just to Saturday’s match at El Paso Locomotive  but also to becoming the team Alan Koch believes it can.

As the coach in his first full season with the local United Soccer League club explained before Thursday’s training session, it can take  time for a coach to see their impact on a club become tangible.

“There’s the roster build, and then there’s the system build,” Koch said. “A roster build traditionally takes three transfer windows. So we had one this last offseason, which we’re happy with the work we did, pretty much we’ve lost the summer one now because of COVID and then we’re working very, very hard with the roster build as to who we’re looking to bring in this coming winter.

“In terms of the system build, I think we’re seeing several of the players truly understand what we’re asking them to do, and then some players are struggling, and that’s inevitable.”

The result a quarter of the way through the revised 16-game regular season had Switchbacks starting the roughly 575-mile bus trip from Colorado Springs to the western edge of Texas effectively in a tie for third-place in Group C with a chance to jump into a playoff position with a win Saturday.

“I don’t think anybody is excited about being on the bus for 12 hours, but we use it as growth opportunities,” Koch said. “It’s obviously time for us as a new staff, we spend time together. I know the players get to spend time together. I think so far on the road, you’ve seen how the group has come together. Pre-COVID we got a great result. I think during this pandemic we got a good result, too. We’re excited about the game. We’re not excited about the journey, but we’re definitely more than willing to embrace the journey.”

So far, the road has been kind to Koch and his team. The Switchbacks started the season with a win in Oklahoma City and earned a dramatic draw at Real Monarchs, another lengthy bus trip, after the restart. Koch said few if any professional teams would bus to games so far away, but it’s the safest option in the pandemic.

“It’s not ideal, but nothing in 2020 has been ideal,” right back Jordan Burt said. “So I think everyone on the team is past all that and it just is what it is and you deal with it.”

Though consecutive home losses paired with some questionable offside decisions have been frustrating, the only player to play in all six of Switchbacks FC’s seasons believes the club is headed in the right direction.

“We definitely have better players than we ever have. I’ve said that before. This is the best Switchbacks team that’s been here since the beginning, so it feels different that way,” Burt said. “I know we play a lot different style, and I think the fans should appreciate that because we keep the ball really well; we play a pretty brand of soccer. In that way it feels different. Now the only thing is start getting a bunch of results and show that we are that team.”

After Will Vint and Abdul Rwatubyaye were kept away from the team for last week’s game, Thursday was too early for Alan Koch to say whether they would be available Saturday. Rwatubyaye was seen jogging around the field separate from team workouts while Vint, who according to KRDO recently tested positive for COVID-19, wasn'tt spotted.

“We’re going with the standard response in terms of unavailability just out of respect to individual situations, but we’re hopeful,” Koch said.. “We’ve still got today to get some of our results back from this week’s testing. We’re hopeful we’ll have some players that are able to come join us again, but we don’t know this yet.”

With New Mexico United still unable to host games in Albuquerque, the clubs’ Aug. 15 match has been moved to Weidner Field with a 3 p.m. start time according to the club’s website. The match will start what is now a six-game homestand for the Switchbacks.